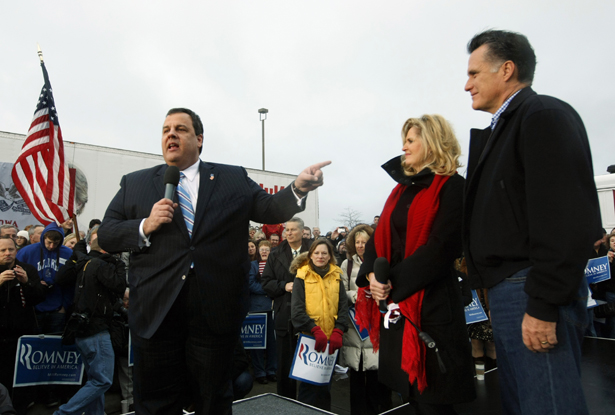 It’s not scientific—well, it’s the opposite of scientific—but it is at least instructive to see whom the people with money think might win the Republican nomination for president in 2016. No, not the big money on Wall Street and the hedge funds, but the odds-makers who work for the gambling industry. In a sense, gambling odds might be a better indicator of political fortunes than opinion polls, since there’s real money at stake—and right now the odds favor Chris Christie and Marco Rubio, according to Ladbrokes, a popular betting site. Christie and Rubio are both at five-to-one odds, with Jeb Bush at 6/1 and Paul Ryan and Rand Paul at 8/1. The rest of the GOP field is way down, facing long, long odds, including Mitt Romney, who’s at 25/1. If you think Romney has a shot, you could make a lot of money.

Despite the odds makers, in New Hampshire, the state that holds the key to Christie’s presidential run, polls show that nostalgia and name recognition trump good sense among Republican voters there, with Romney far ahead of the rest of the GOP pack, according to The Star-Ledger:

The last poll of likely Republican voters in New Hampshire showed Christie, who has been hurt by the fallout from the George Washington Bridge controversy, as a leading GOP choice for a presidential run—unless Romney mounted another presidential run. Romney was the favorite among 24 percent of GOP voters here and Christie came in at a distant second at 9 percent, according to the July survey. But when Romney—who has repeatedly denied any interest in running a 2016 race—was taken out of the mix, Christie tied with U.S. Sen. Rand Paul (R-Ky.) at 11 percent. They were followed by former Florida Gov. Jeb Bush and U.S. Sen. Ted Cruz (R-Texas) at 8 percent, former Utah Gov. Jon Huntsman at 7 percent and U.S. Sen. Marco Rubio (R-Fla.) at 5 percent.

As Christie Watch has reported all along, Romney and Christie have been engaged in a political waltz together for the past year or so, and Romney was one of the first national Republicans to come to Christie’s defense when the Bridgegate emerged in late 2013, and earlier this year Christie was a star invitee at a Utah meeting of former top political and fundraising aides to Romney 2012 campaign. (In 2012, of course, Romney considered Christie as a potential running mate.) For 2016, it’s very unlikely that Romney will be a candidate, but he’s a popular party leader and GOP fundraiser, and next month Romney will make a high-profile visit to New Jersey on Christie’s behalf, attending a $150-a-plate dinner in honor of the New Jersey governor’s fifty-second birthday, at which more affluent celebrants can fork over $5,000 each for a private reception.

Pat Buchanan, whose political instincts aren’t always stellar, is touting a new book on Richard Nixon and “the greatest comeback,” and in a recent appearance on MSNBC’s Morning Joe, Buchanan too waxed nostalgic about Romney:

I think the establishment of the Republican Party is seeing that Chris Christie may not be able to do it and that Jeb Bush does not look like he’s in fit running condition. And I think they’re looking to Romney because they’re looking for a candidate they think can move outside the red state base and win blue states possibly. The polls are showing Romney running ten points or so ahead of Obama. But he’s running behind—he’s running behind Hillary [Clinton]. My view, though, is that Romney is sort of the Nixon in the sense that he’s a candidate who’s lost two times or three times, whatever. And he’s considered a loser. However, he’s considered presidential material. And I think a lot of people are looking at him because they think that maybe he’s the only guy that can really go the distance.

At the Conservative Political Action Conference (CPAC) in March, however, lots of hard-core conservatives told Christie Watch that in 2012 Romney was “too nice” and that the New Jersey governor would be a lot tougher as a candidate than Romney was, more willing to push back hard against the Democrats (read: Hillary Clinton) than Romney did against Barack Obama.

According to The Star-Ledger’s Matt Arco, Christie—who’s already made two visits to New Hampshire in 2014, and six all together—will be back in New Hampshire in September. Ostensibly, Christie is doing all this in his capacity as chairman of the Republican Governors Conference to campaign for the long-shot GOP gubernatorial candidate in the Granite State. And that’s odd, since Christie has refused to spend any of the RGA’s time or money in support of Rob Astorino, the Republican running for governor in New York—but, of course, New York doesn’t figure in the presidential primary race for 2016.

Christie, of course, is still plagued by scandal at home—there’s no telling when or if the US attorney or other investigators will take action—at he’s dealing with a lagging New Jersey economy made worse by a budget crisis and Christie’s war on New Jersey state workers’ pensions. But he’s still a formidable candidate, especially in one-on-one formats and in town hall meetings, where his combination of seeming empathy and tough-guy bluster has proved popular. According to David Plouffe, Obama’s former political adviser, Christie has raw political talent that surpasses that of his rivals, according The Wall Street Journal:

New Hampshire is the perfect state for him, he’s a born town hall meeting person. If you want to just do campaigning from a podium this is not the state do it. This is a very different state because the voters of New Hampshire almost expect hat you’re going to get right in and tell them who you are…(and Christie) commands attention and he’s good in these town hall type of one-on-one engagements.

New Hampshire is crucial for Christie because he’s likely to lose big in Christian fundamentalist Iowa’s caucuses, whereas New Hampshire Republicans are less-religious—plus, in New Hampshire, independent voters can cast their ballots in the GOP primary, and Christie is crafting an appeal to centrist, independent-minded conservatives.