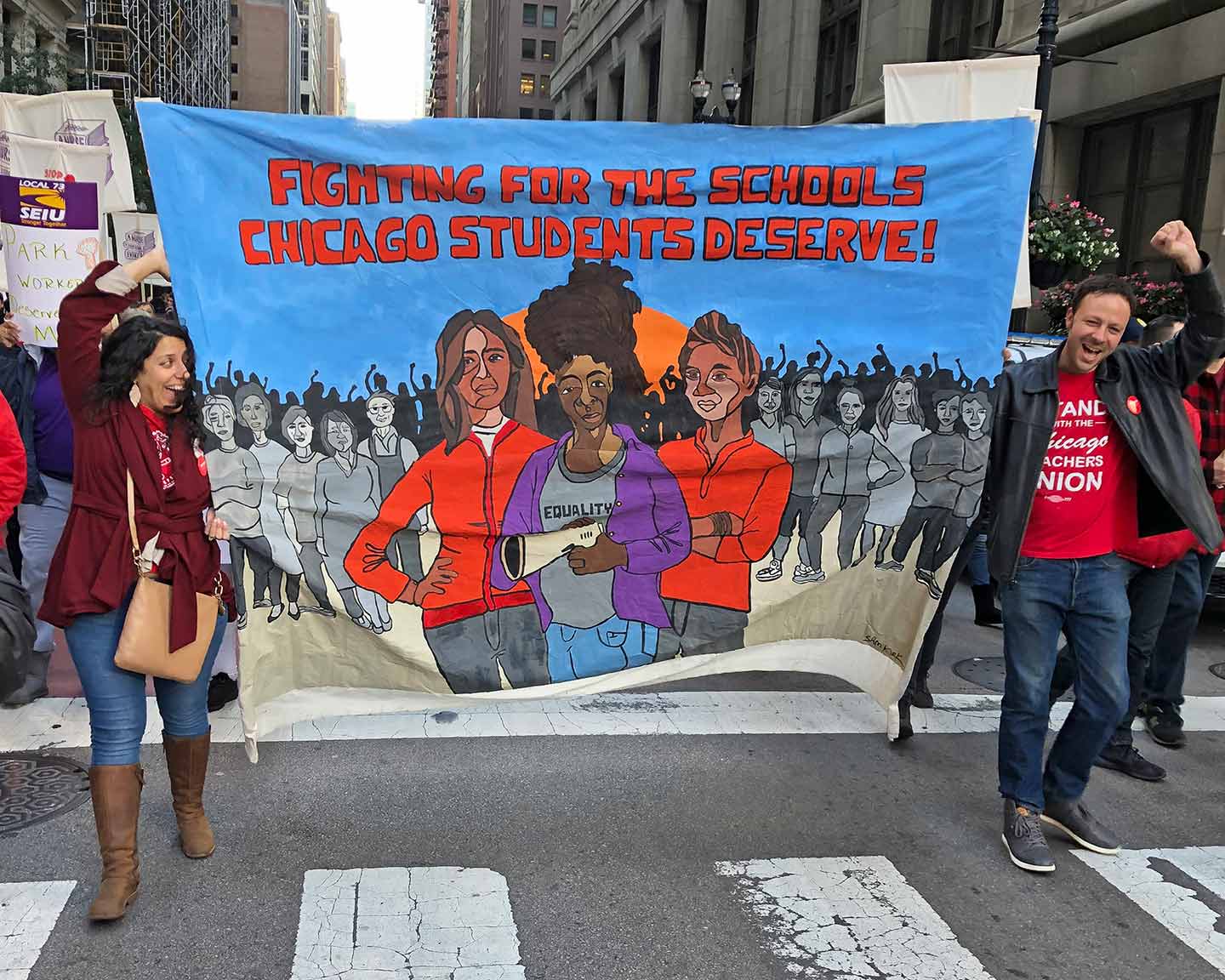 The sun’s not up, but the teachers are.

It’s Thursday morning, and in front of more than 500 schools spread across every neighborhood in Chicago, 25,000 members of the Chicago Teachers Union (CTU) and 7,500 school workers represented by Service Employees International Union (SEIU) Local 73 are on the picket lines for the first day of a strike at the Chicago Public Schools (CPS).

Carolyn Brown is getting organized at Kelly High School on the city’s Southwest Side. She’s a reading teacher and the delegate who represents Kelly educators in CTU citywide meetings, but right now, she’s worried about gaps in the line of teachers, students, and supporters that has to stretch about a quarter-mile in front of the sprawling school. 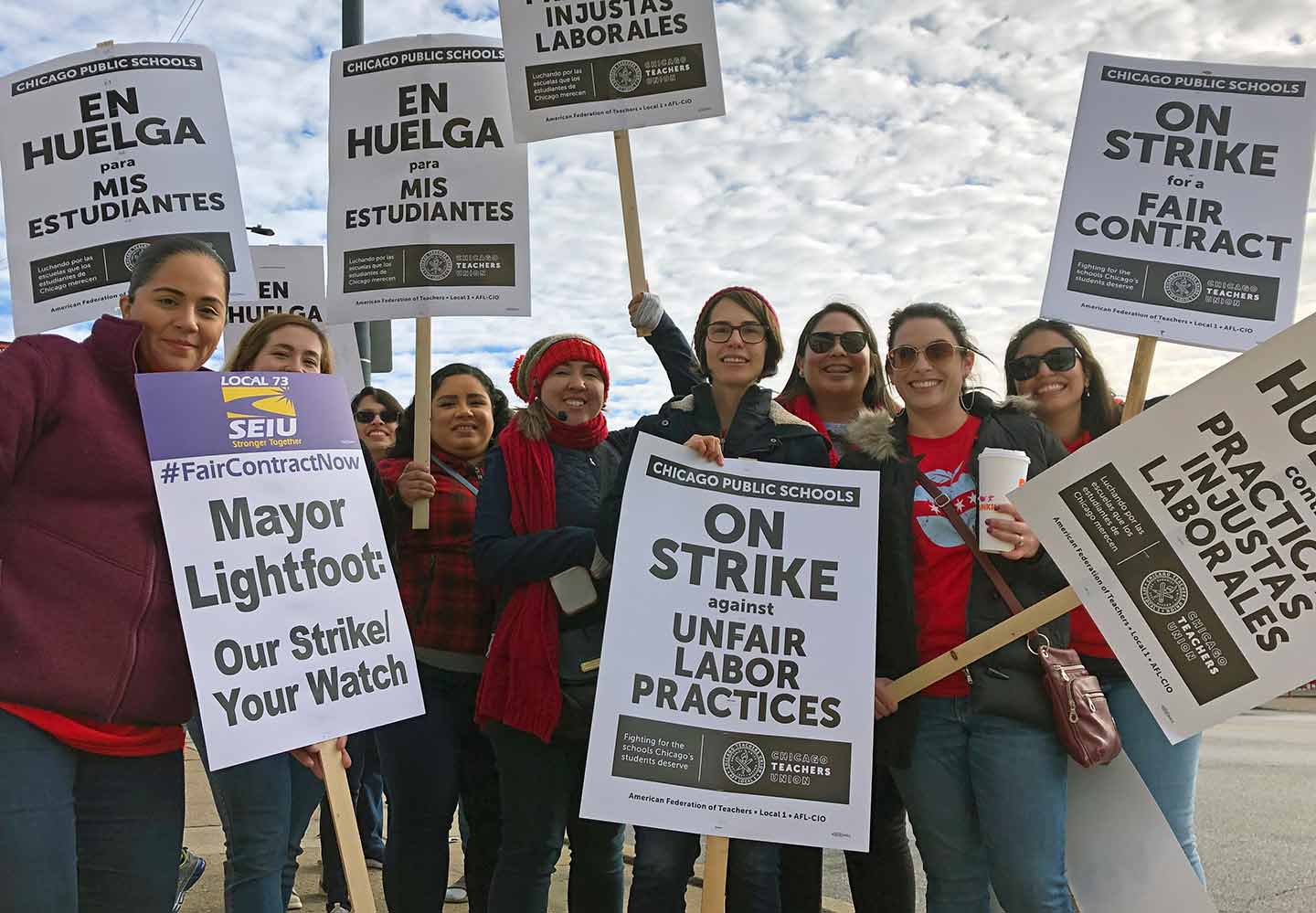 Ask her why the strike is happening, though, and she’ll talk about her jobs in the classroom that have nothing to do with teaching reading.

“All of us have had a lot of experience with being forced to take on too many roles in the building,” Brown says. “We don’t have a librarian, so I hijacked a bunch of books from our library and moved them to my classroom so that kids could borrow them. We have a school of almost 2,000 students, and we don’t always have even one nurse in the building.” Brown says she keeps a drawer full of Band-Aids for the days when the nurse is assigned to another school.

“You become overwhelmed,” she says. “Even if we get the pay raises that we want, it doesn’t change the fact that our day-to-day work conditions are incredibly stressful and unhealthy.” 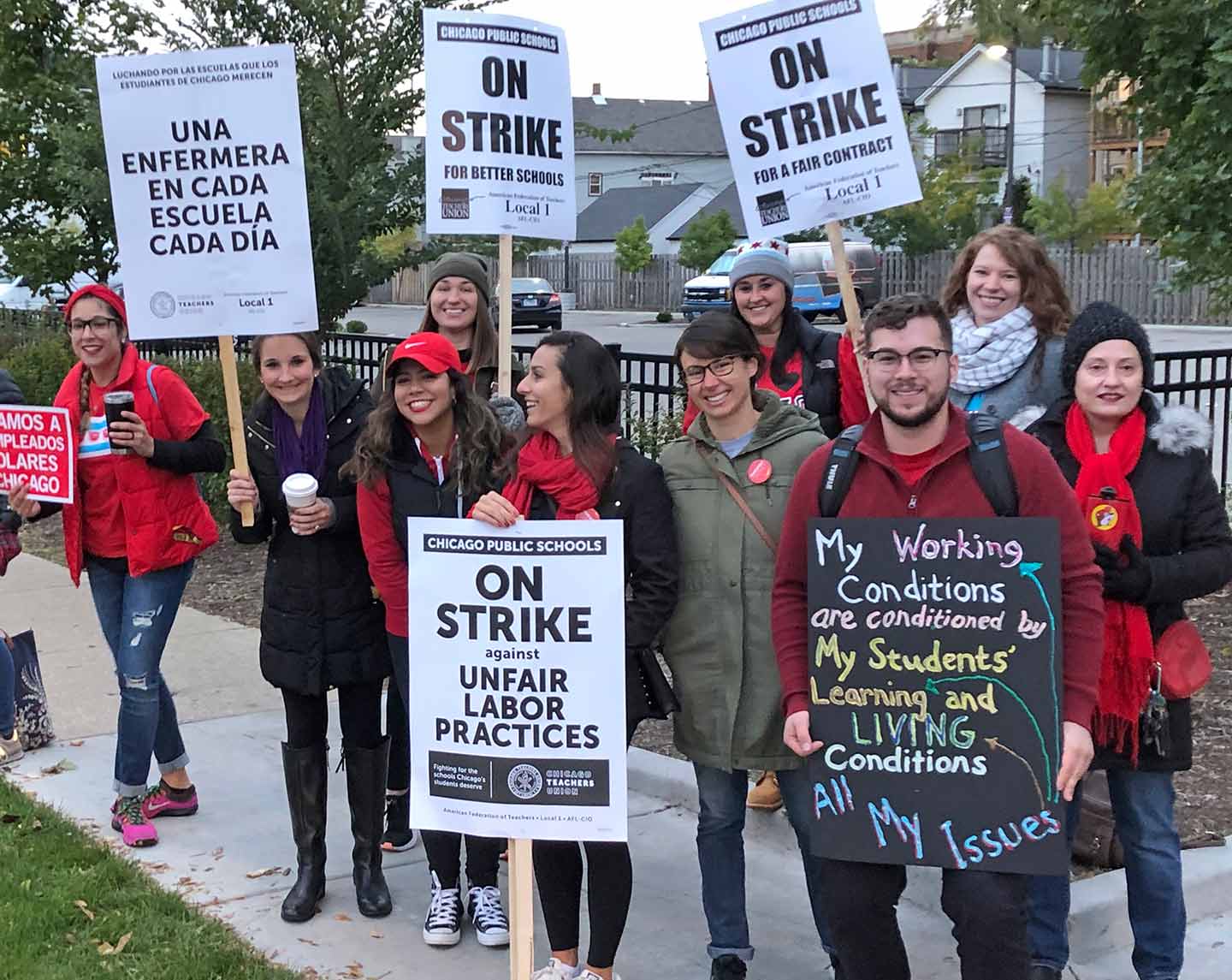 Picket line at Brentano Elementary School on the first day of the strike on Thursday. (Alan Maass)

You don’t have to tell Kirstin Roberts, a pre-kindergarten teacher at Brentano Elementary School on the Northwest Side. “I have kids who come to me displaying all the signs of PTSD-related, traumatic early childhood experiences,” she says. But there’s no regular school social worker for them. “My coworker and I are in tears at least weekly over the realization of how little there is, either in the school system or the city, to deal with those issues,” Roberts says. “These are beautiful children, they’re brave children, and they deserve help, they deserve support, they deserve a chance in life. That’s what we see this strike as being about.”

The schools Chicago’s students deserve: That’s been the slogan of the CTU since their landmark strike in 2012. Educators want this year’s walkout to truly improve their students’ learning conditions, which are also their working conditions. 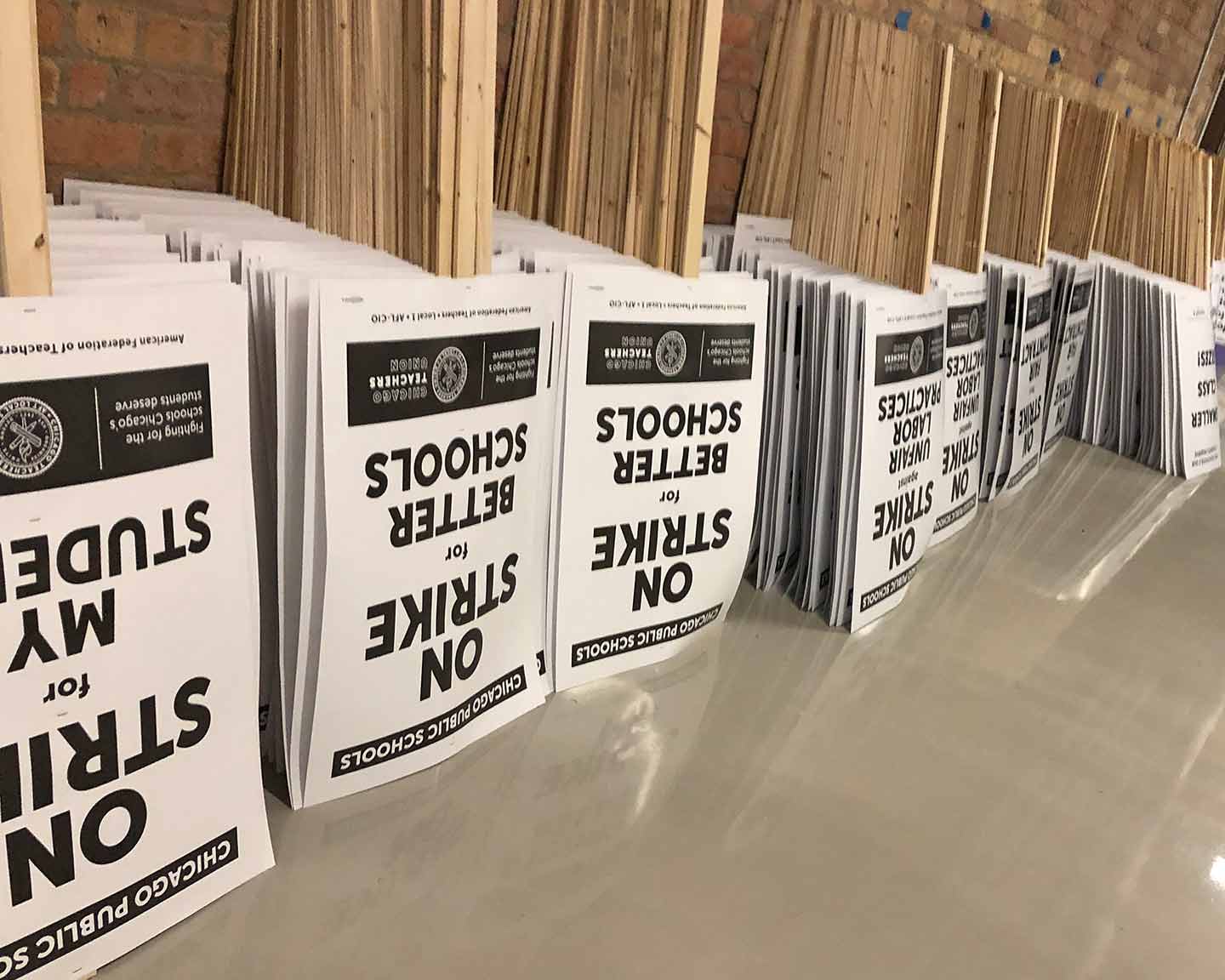 A 1995 Illinois law restricts the “mandatory” issues in CTU negotiations to pay, benefits, and the length of the school day and year. But that doesn’t prevent the CTU and SEIU Local 73 from raising hell about safe staffing, overcrowded classrooms, privatization, and wider social questions—and asking first-year mayor Mayor Lori Lightfoot to commit to her campaign promises in the new contract.

Lightfoot says she’s “disappointed” in the teachers and school workers for not accepting the city’s “generous” offer on salaries—around 3 percent a year over five years—so CPS students could stay in school. Back at Kelly, seniors Roberto Castro and Omar Valdez aren’t impressed. “If they wanted us to be in class,” says Castro, “then they should probably get a better learning environment for us students.”

Castro has a sousaphone wrapped around him. He and Roberto are part of the Kelly band, which has a proud tradition since 2012 of kicking off CTU marches. A dozen band kids have come out to show their support for teachers. “I know it’s gotten progressively worse since I was little, and now I’m a senior,” Castro says. “What’s going to change it from getting even worse 10 years from now?”

Tia Brown and Nicole Scott wonder the same thing, but they go back further. They both graduated from Chicago Public Schools, they both became teachers, and now they’re both walking the picket line in front of Willa Cather Elementary School, in the East Garfield Park neighborhood of Chicago’s West Side, one of the city’s epicenters of poverty and gun violence. 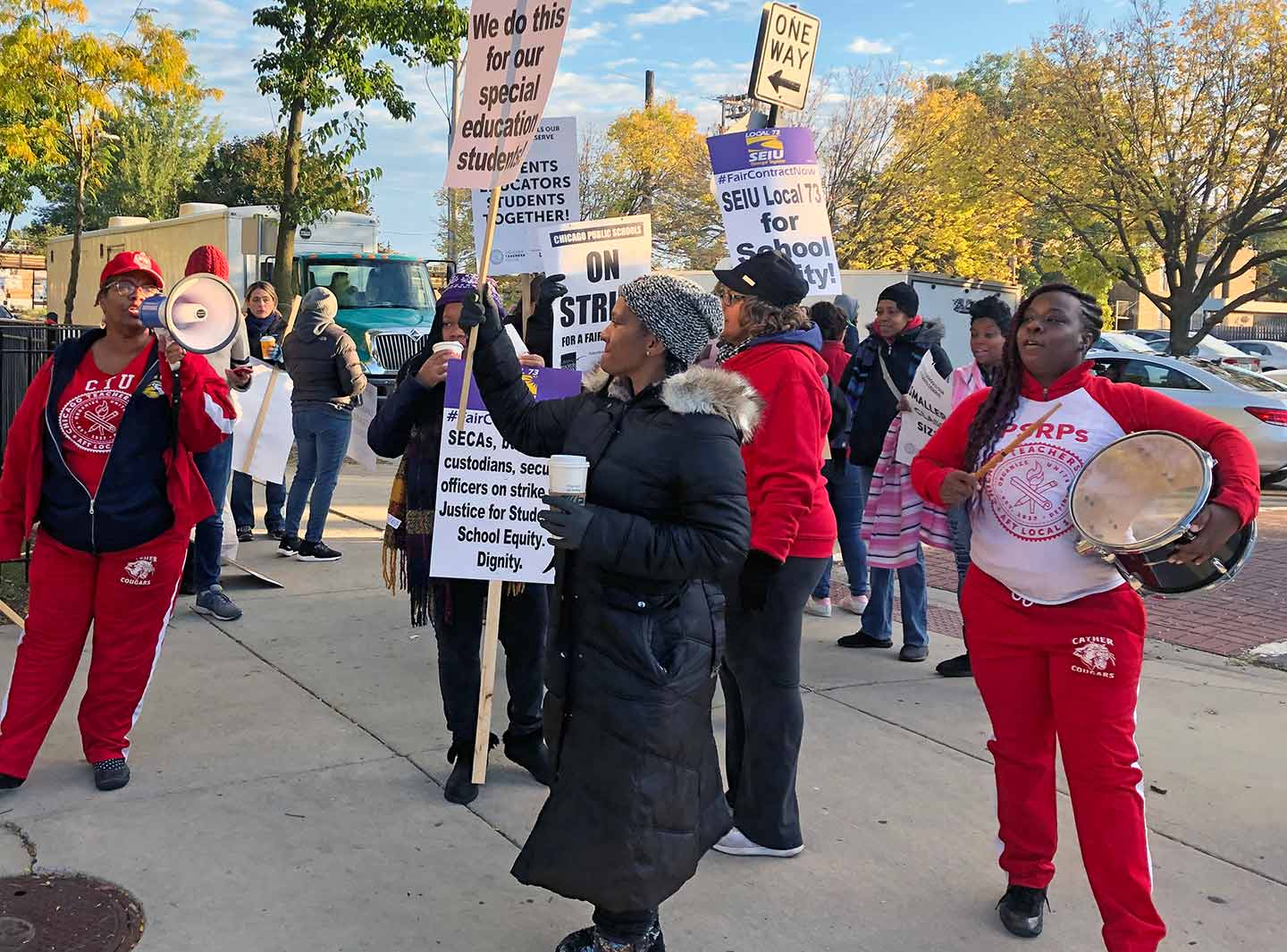 A picket line at Willa Cather Elementary School on the first day of the strike on Thursday. (Alan Maass)

Brown and Scott have been at Cather for 16 years and 12 years, respectively, but they say the problems that this strike is addressing go back further. “When I went to grammar school,” says Scott, “we had a science lab, we had a music class, we had an art class. We had all these different resources that exposed us to things, and now, I don’t see any of that in my West Side schools. I even went back to my old school, and they didn’t have any of the resources that they had when I went there. Our kids love music, and they don’t have music. They don’t have art. They don’t have a librarian.”

Incredibly, some of the public-school workers walking the picket lines in Chicago are living in poverty.

Gemma Roman is a special education classroom assistant at Brentano, assigned to work with individual diverse learners. Like over half of her fellow SEIU Local 73 members, Roman can’t make ends meet for herself and her children on a CPS salary, so she works a second job—currently a nonprofit, before that Door Dash, Uber, Lyft, or Amazon Flex. 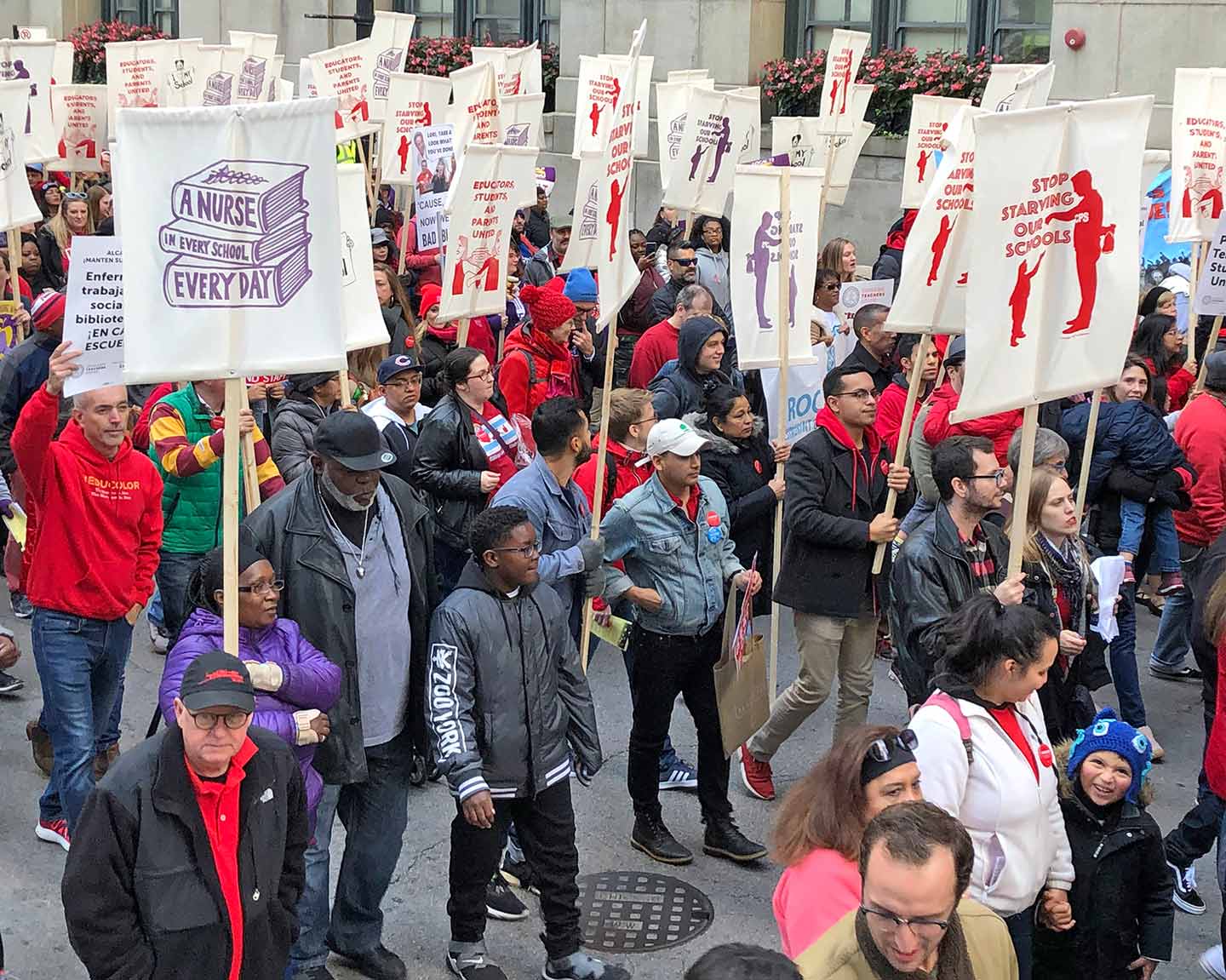 On the march to City Hall down Clark Street, October 14. (Alan Maass)

Brentano math teacher Aaron Bingea sums it up, saying, “We’re fighting to dramatically change the way the city deals with our schools in Chicago. This is a moment when the progressive movement is feeling empowered. We’re advocating for something that we should have had for the last 30 years, but we’ve never felt we had the power, and now we do.” 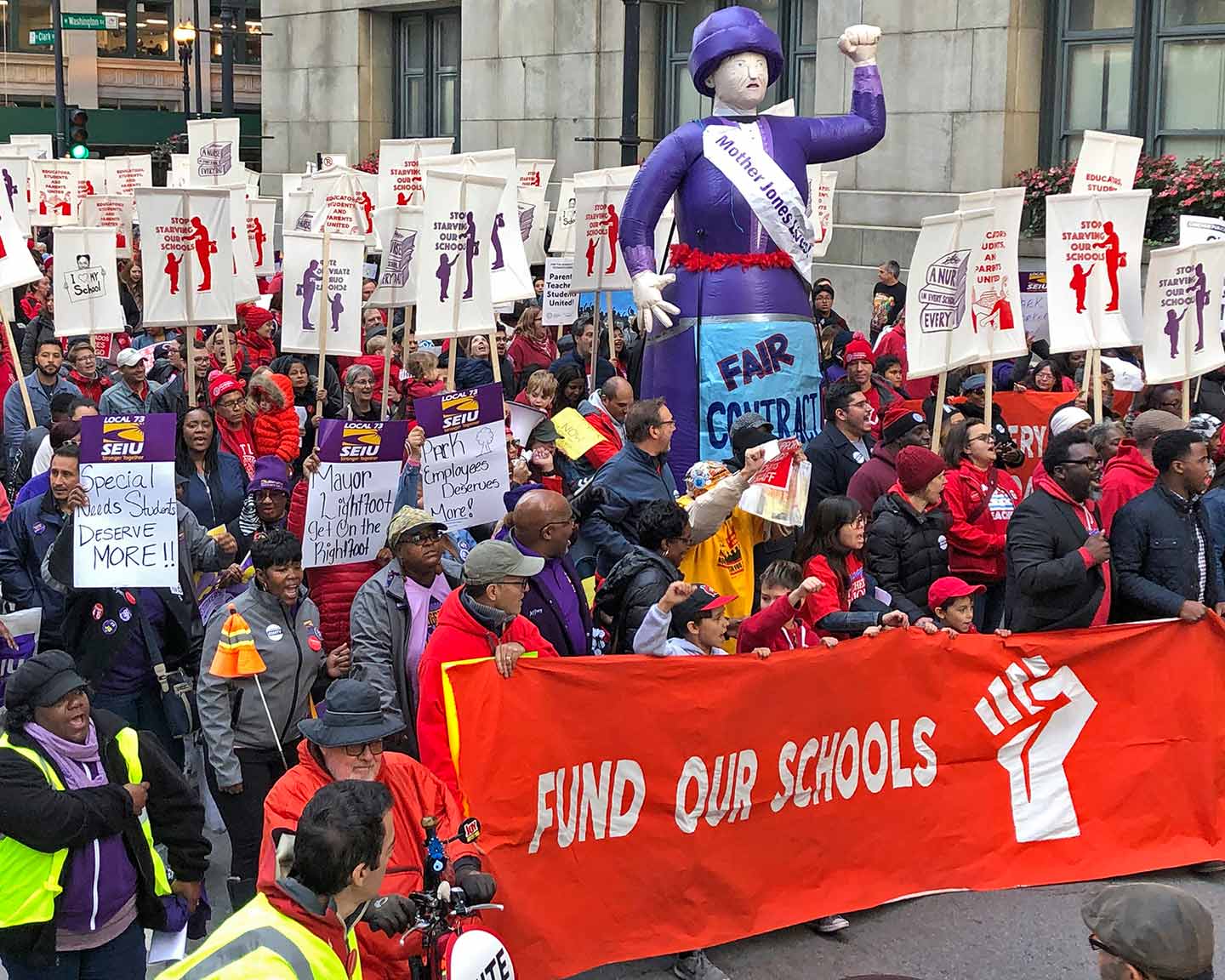 On the march to City Hall down Clark Street, October 14. (Alan Maass)