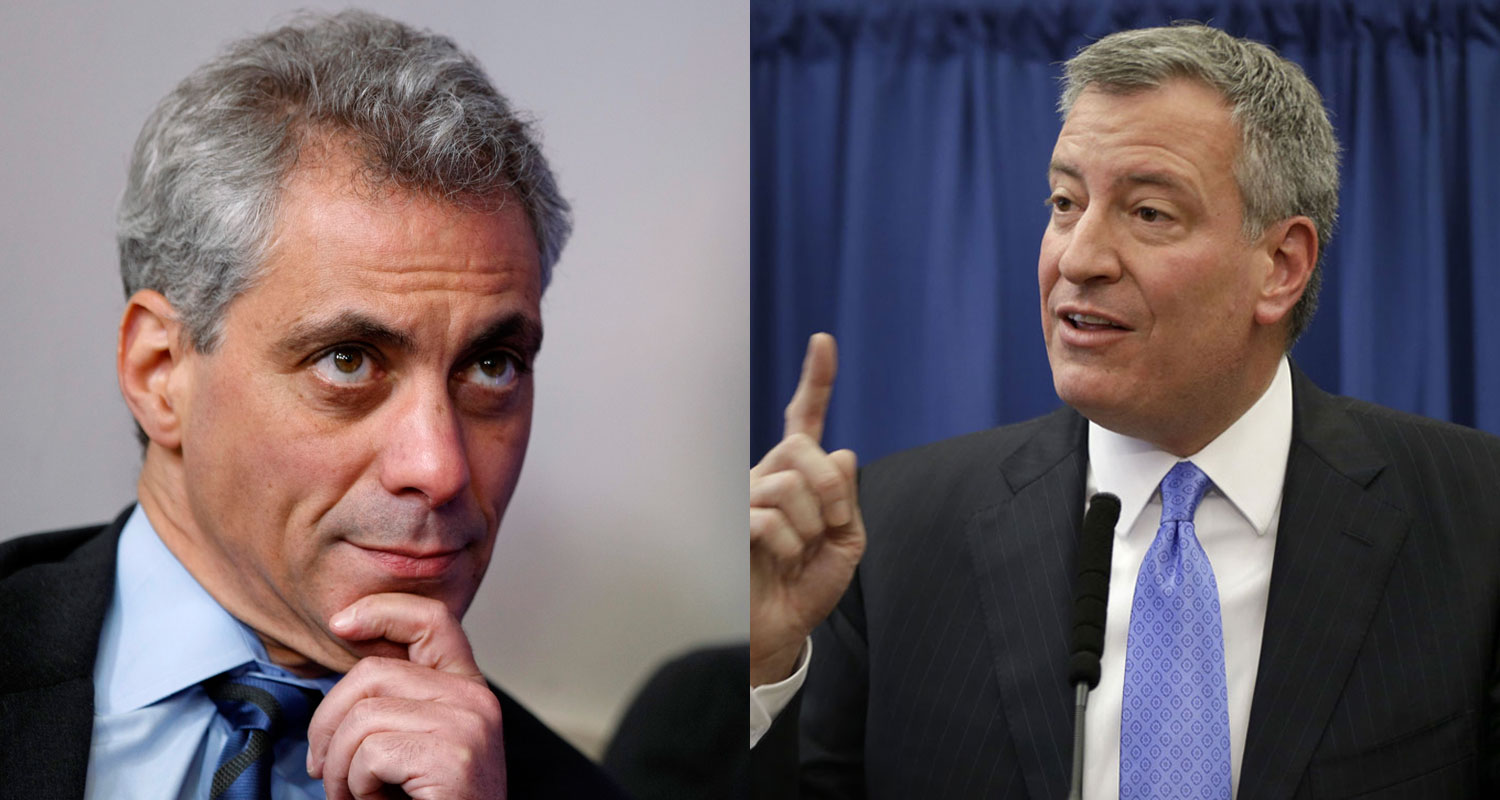 Bill de Blasio was swept to the New York mayoralty on the promise of getting Gracie Mansion out from under the thumb of corporate elites. So how worried should you be that he listened to Chicago’s Rahm Emanuel and is now getting advice on his transition from Emanuel’s corporate consultants.

The story first broke three weeks ago in the web publication Capital New York. “De Blasio’s Shadow Transition” cited an unnamed source (I know who the source is, and can vouch for his trustworthiness) who said that following a November meeting between de Blasio and Emanuel, the nonprofit group Civic Consulting USA “has ‘embedded’ into the process a team drawn up from the ‘creme de la creme of big New York consultants.’ This group has shaped the process by organizing the original transition team into a number of topic-specific committees and then bringing in an even greater number of other people onto those committees to participate in the search for future administration members.” Civic Consulting USA is an offshoot of a Chicago group, the Civic Consulting Alliance, which provides opportunities for corporate executives to do pro bono work on municipal affairs. And in Chicago, where CCA was also instrumental in staffing Emanuel’s transition, their record has been creepy.

Regular readers of my work for The Nation are familiar with my reporting on how Mayor Emanuel rammed through the nation’s largest school closing. Because the move so plainly defied common sense, democratic procedure, empirical honesty, racial and class equity, safety and sound educational policy (see my reporting here, here, here, and here), the plutocrat-heavy school board Rahm personally appointed faced the problem of how to sell it. That’s where the Civic Consulting Alliance came in—and also the Walton Family Foundation, the right-wing group controlled by the family that owns Wal-Mart, who are rather gung-ho to close public schools in order to turn them over to charter school operators.

According to the outstanding Chicago-based independent schools publication Catalyst, that sales job

The Walton Foundation agreed in November to provide CPS with a grant for the community engagement process around the “utilization crisis,” according to the CPS communications office. The foundation lists a $478,000 grant to the Children First Foundation, a not-for-profit set up by CPS…

The district had not budgeted for a “rigorous community engagement effort” and therefore needed to reach out for funding, notes spokeswoman Becky Carroll. CPS is using the grant to pay for the “independent facilitators” from the Loran Marketing Group, which is running the breakout sessions at the community meetings.

The content of these breakout sessions is not clear. CPS has banned the media from attending them.

The School Utilization Commission that is advising the district on closings is staffed by the Civic Consulting Alliance, a not-for-profit that does business consulting for city government. The Civic Consulting Alliance is housed in the same office as New Schools for Chicago, an organization that funds and advocates for charter schools. New Schools for Chicago also received a $220,000 Walton Family Foundation Grant….At community meetings that have already taken place, attendees have repeatedly accused CPS officials of wanting to close schools in order to make way for charter schools.

Now, the Civic Consulting Alliance is is not all bad, their work not inherently controversial; this piece by a CCA fan boasts how it corralled free labor to help “redesign workflow for the police department that resulted in the equivalent of adding dozens of officers to the force.” And in this piece Cook County Board president Toni Preckwinkle, a genuine progressive (who would make a great mayor; run, Toni, run!) hosannas CCA for helping “county agencies to establish county-wide goals and metrics in areas such as public safety and economic development.” Hurray!

But in America, policy preferences are deeply divided by class. A study by political scientists Benjamin Page, Larry Bartels and Jason Seewright, for instance, found that 68 percent of the general public believed “the government in Washington ought to see to it that everyone who wants to work can find a job,” versus 19 percent of the wealthy. That is why any arrangement that gives the rich special entry into the halls of government cannot be a merely technocratic act. And when you consider the kind of plutocrats helping run the Civic Consulting Alliance in Chicago, the problem looks even worse. Consider a fellow named Ty Fahner, who sits on CCA’s board. Consider it, and prepare to be shocked.

Recall the basics of Naomi Klein’s “shock doctrine” idea: because hollowing out the state in is not popular, elites have to manufacture crises in order to get it done. Now listen to Ty Fahner. Fahner is a former Republican attorney general of Illinois and president of the Civic Committee of the Commercial Club of Chicago—basically the star chamber for executives at Chicago’s biggest employers. He spoke last summer to a meeting at the tony Union League Club on the “urgent need” to cut the pensions of government employees. His presentation was broadcast on C-Span. At forty-six and a half minutes into the presentation, an unidentified audience member, apparently an executive at Kellogg, said:

Maybe sometimes you gotta be irresponsible to be responsible. If a political solution really doesn’t produce a favorable outcome, maybe you really need a market solution. And a market solution, I don’t mean bankruptcy, I mean actually talking down the state rating even further so the state’s bonds essentially become below investment grade. And it drives up the borrowing cost to the state and all of us to a significant level enough that you really feel the public pressure. I mean, that’s somewhat irresponsible…but there has to be a market pressure that is overwhelming.

To translate: Why don’t people like Fahner use their influence with bond rating agencies to try to make it harder for the State of Illinois to borrow money?

The Civic Committee, not me, but me and some of the people that make up the Civic Committee, some of the same names I mentioned before, did meet with and call—in one case in person—and a couple of calls to Moody’s and Fitch and Standard & Poors, and say “How in the hell can you guys do this? You are an enabler to let the state continue. You keep threatening more and more and more.”

And I think now we’ve backed off. We don’t want to be the straw that broke the camel’s back. But if you watch what happened over the last few years, it’s been steadily down. Before that, it’s been the blind eye…we’ve done all we can do on that…we’re trying to work the political process…rattle the sabers and call everyone and tell them.

Again, translating: “We” already tried that. Then we stopped. Not because it was unethical, or undemocratic. But because we wanted plausible deniability if anyone (correctly) accused us of sabotaging the full faith and credit of Illinois government. And, hey! It worked.
(Subsequently Fahner claimed he “misspoke” and that nothing of the sort ever went down. Apparently he got the message that you didn’t admit to stuff like this in public.)

Now, I’ve found no evidence Fahner himself is involved with Civic Consulting USA—just the original Chicago version, CCA, from which CCUSA sprung. The bottom line here are the questions. The ties between the original and the spinoff are close; CCA provided CCUSA’s CEO, who is still listed as a CCA principal. Fahner is still on CCA’s board. Here is CCUSA’s board. Is there a Ty Fahner–style shock-doctrineer among them? And why couldn’t de Blasio staff up City Hall without messing around with people the Walton Foundation trusts enough to grant half a million dollars? Gracie Mansion: let’s hear what you have to say. With friends like these, the danger is that Bill de Blasio’s revolution might end before it has chance to begin.