The women in Chantal Akerman’s films are domestic and dysfunctional, moving wordlessly through the same household spaces—bedroom, kitchen, balcony—and disintegrating: lying on a bare mattress for days on end, eating spoonfuls of sugar from a paper bag, collapsing over stoves, thrusting out scissors in a gesture of harm to themselves or others. Undoubtedly, Akerman’s films are about women, spurring critics for decades to describe her work as feminist. In fact, Akerman resented what she perceived as being put in a box or attached to a single label. On those occasions when she would spell out the meaning of a particular work, more often than not she circled the same muse: her mother.1

Chantal Akerman rose to prominence at the age of 25 with her film Jeanne Dielman, 23 Quai du Commerce 1080 Bruxelles, the story of an inscrutable housewife who alternates between cooking, cleaning, and sex work, all from within her Brussels apartment. Over the course of the film’s nearly four-hour running time, the stifling and isolated mundanities of Dielman’s daily life are meticulously detailed. Like many of Akerman’s films, Jeanne Dielman is deliberate, almost challenging in its pace, and it refuses to cohere to a conventional plot or structure (the climax includes a pot of overcooked potatoes and a dropped spoon). In interviews, the director would call the film “a love letter to my mother.”2

In 1977, two years after Jeanne Dielman was released, Akerman would feature her mother Natalia (or Nelly) directly in the autobiographical film essay News From Home, which consists of long, steady shots of New York—the architecture, the subways, the passers-by—all set to a voiceover narration of Akerman reading real letters from her mother, written from their family home in Brussels. These letters, loving, nagging, and boring in equal parts, draw and redraw the familiar lines of a family life outgrown as Chantal’s transnational world expands. These early works establish a theme that appears throughout Akerman’s oeuvre: speaking through her mother’s voice, arriving at her own. Akerman wasn’t a feminist filmmaker, at least in her own eyes, but she was unquestionably a daughter.3

From 2013 to 2015, Akerman’s last three works would chronicle the final years of both her mother’s life and her own: a film, No Home Movie; an art installation, NOW; and a book, My Mother Laughs, which has recently been translated from the French for the first time since its publication in 2013. In hindsight, there’s an urgency to these works, singularly focused and quickly released: Nelly passed away in 2014, and Chantal died by suicide a year later at the age of 65. Prior to this trilogy, Akerman’s films held emotion and even first-person perspective at a calculated remove. Silence reigns—we sit for minutes and watch the wind rustle the leaves. It is jolting, then, to open My Mother Laughs, which begins: “I wrote it all down and now I don’t like what I’ve written.” Chantal continues, breathlessly: “That was before, before the broken shoulder, before the pulmonary embolism, before my sister and my brother-in-law called me so I could say goodbye to her (for ever).”4

From here, the small world of My Mother Laughs is set. Loved ones become caregivers, a duty that must be assigned to the family’s most responsible members, whom Chantal acknowledges (insistently and with some offense) does not include herself. (Her sister Sylviane, Chantal and Nelly agree, is better at these kinds of things.) Nelly’s bodily trials are presented not as personal but universal: “the broken shoulder,” “the pulmonary embolism,” as opposed to that which belongs to Nelly (her shoulder, her embolism). Diagnoses are no longer medical but metaphysical, temporal, even philosophical—the implication that the Chantal who wrote “before” is somehow othered from the Chantal who writes us now, from the enlightenment of the inevitable “after.” As in News From Home, Chantal’s selfhood—her artistry, her perceptions, her sense of time itself—is tied to Nelly.5

The events of My Mother Laughs are centered solely on Nelly’s health, alternating caretaking and worry with passing references to the solace that writing brings and a nod to Chantal’s usual themes as an artist. (“The only thing that can save me is writing. And even then…when I write it’s about her.”) Chantal and Sylviane note that infirmity, the exhaustion of illness, brings out a different side of their mother, who speaks with a harsher cruelty and more maudlin sentimentality than before. On reflection, Chantal defines herself through negation, here and elsewhere: “My mother is changing. I’m not.” She also uses where Nelly is (emotionally or geographically) as a means of measuring the distance between them and, in so doing, locating herself.6 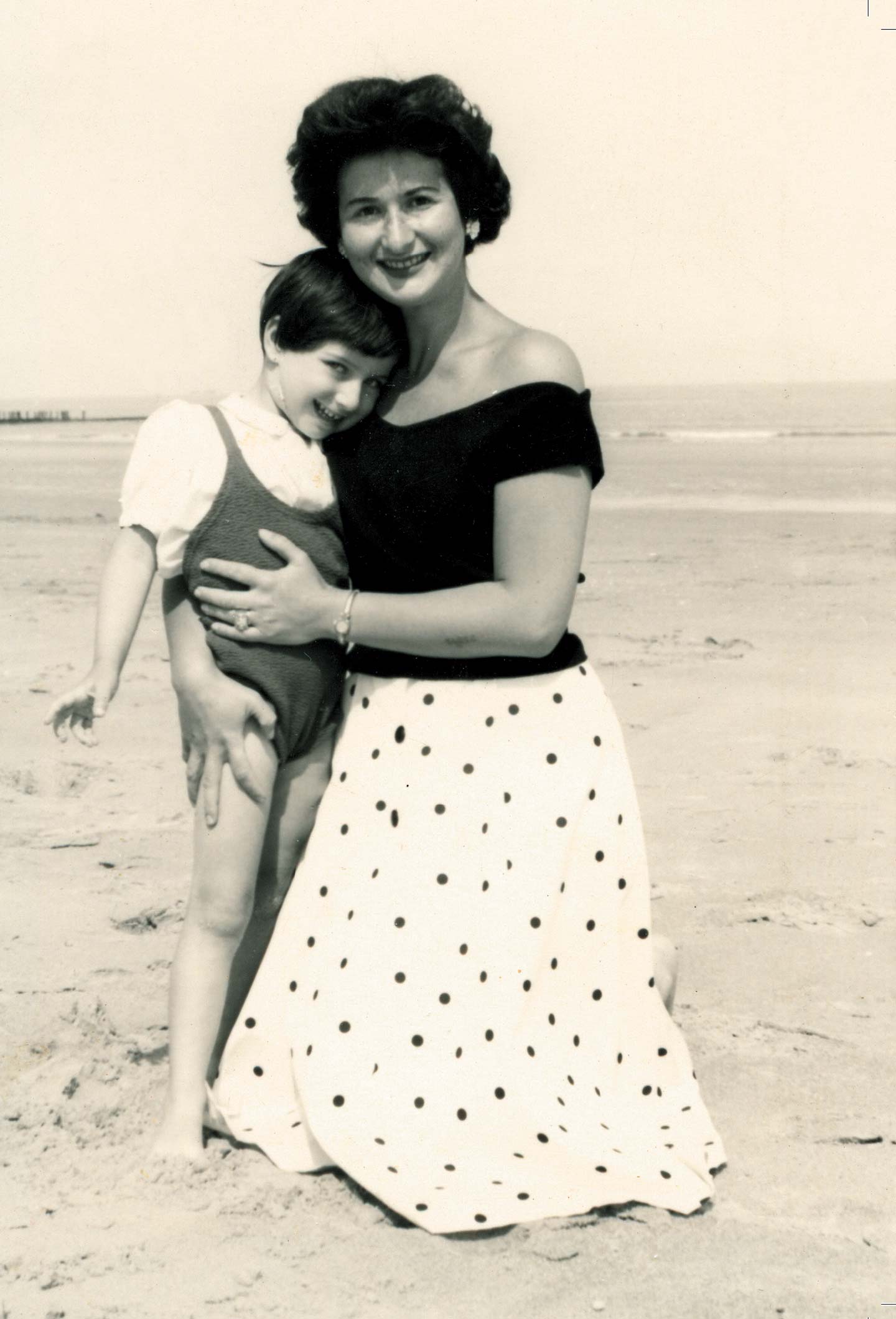 Chantal Akerman and her mother. (Courtesy of Silver Press)

Throughout the book, the contrasts between Akerman and her sister are similarly emphasized. This is often expressed through Nelly, who worries that there will be no one to fix her plumbing or cook her meals when Sylviane is away—the implication being that she doesn’t believe Chantal is capable of taking on such tasks. At times, Nelly reminds Chantal of her frailty as an infant (“Sometimes she talks about when I was born and the fact that her milk didn’t agree with me and how horrible it was to watch her child get weaker every day”) or chastises her at family dinners (“My nephew laughs and says, You treat her like a four year old child”). Still, there are moments when the particular closeness between Chantal and Nelly is evident, in their secrets and asides, which dissolve the line between mother and daughter. When Nelly groans in bed, Chantal reflects, “She saves it for me or for herself when she’s alone and no longer aware of her surroundings. When there are people around the groaning stops.” For Nelly and Chantal, the presence of the other reifies something about themselves—a greater truthfulness and transparency, a sense of authenticity.7

In the portions of the book that deal with Akerman’s struggles to adequately care for her mother, her writing is tormented; she depicts herself largely as helpless, unlike the capable Sylviane. Chantal’s anxiety over her (in)ability to care for her mother reflects the existential nature of a child’s connection to their parents. What is the role of a daughter: Is it caretaking? Is it recordkeeping? To be a “daughter” is, in most cases, an object position, something realized by the choices of someone else. Can one take an active stance of daughtering?8

One of the more famous works of critical theory on Akerman is called Nothing Happens, a succinct summation of the filmmaker’s deceptively simplistic—and, at times, intentionally and aggressively boring—style. It is not inaccurate, nor a spoiler, to say that in My Mother Laughs, nothing happens: The book exists in the suffocating purgatory of the sickbed. Time slogs, stops, or skips like a broken record, from well before Chantal’s birth to her adolescence to the present. The effect of this stylistic choice is to highlight the temporal ambiguity of daughterhood, a status that has a distinct starting point (birth) but a murky end. Daughterhood is the opposite of isolation, Akerman implies: an identity that comes paired with a wellspring of ancestors and historical memory. It is significant that Nelly is a survivor of Auschwitz, and Chantal’s rumination on her mother’s trauma reflects the anxiety of loss—not merely of her mother but her memories as well.9

Caught up in this timeline somewhere between the familial and the world-historical, My Mother Laughs wrestles with daughterhood—its guilt, its expectations—and fixates on a painful question: What will become of Akerman after her mother’s death? Queer and without children, Chantal believes that what she has to offer to her mother’s legacy is nebulous at best, nonexistent at worst. Throughout the book, she wonders: Can daughterhood ever produce as motherhood does without one’s becoming a mother oneself? Can something other than motherhood liberate daughterhood, unknot what Ackerman’s contemporary, the arthouse filmmaker Sue Friedrich, calls “the ties that bind”? Alienated, Chantal resorts at times to describing herself through a self-devised mythos, as in this early passage:10

The child was born old and so the child never became an adult. They grew into the adult world as an old child and found it hard to adjust. The old child knew that if their mother ever died they’d have nowhere left to go.… The child is her, it’s me. And now I’m old, soon I’ll be sixty. Or maybe older.… I don’t have children. An old child doesn’t have children. So what attachment will I have to this life after.11

This is Akerman in one of her more bitterly self-disparaging moments, conflating the timelessness of daughterhood with “childhood,” which should be outgrown. Yet even if, at the start of the book, she sees herself as unable to truly provide for Nelly, My Mother Laughs reminds us of her real legacy. In this loving, tortured, unflinching portrait of a mother’s final illness and its devastating effects on those she leaves behind, Chantal Akerman transforms daughterhood into a generative force in its own right, harnessing herself and her mother, swirling into and away from one another, held between cover and cover.12