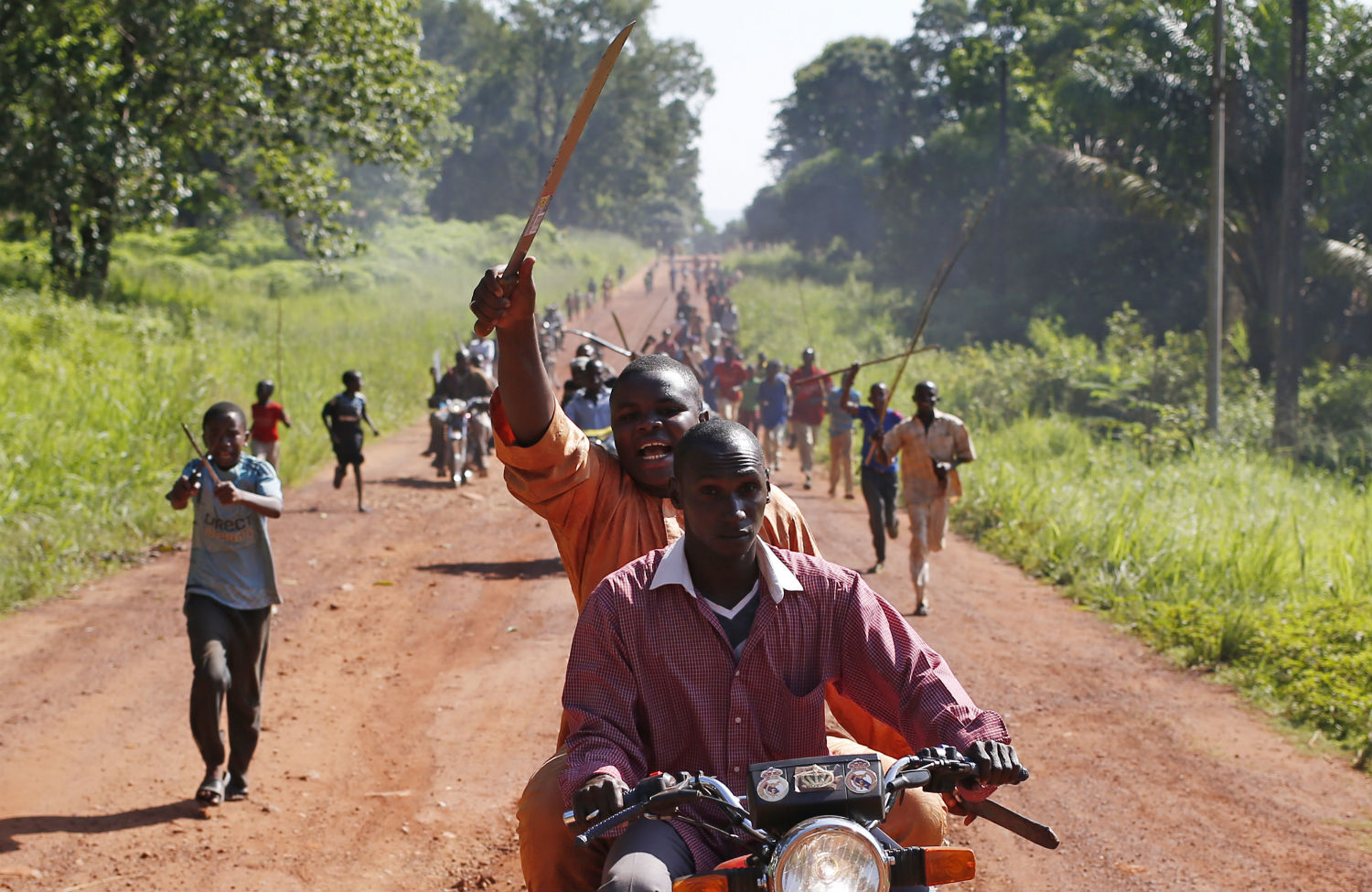 A man waves a machete in a protest against French peacekeeping troops in the Central African Republic.  (Reuters/Goran Tomasevic)

Take a look at the World section of nearly any mainstream news outlet and the main story will be Iraq, Syria, Ukraine or Gaza—all of which are suffering acutely from their respective conflicts. Yet even together they hardly enjoy a monopoly on gruesome civil wars or protracted refugee crises.

At a time of so many global calamities, it’s easy for smaller countries in which the United States lacks a vested interest to fall by the wayside. And that’s exactly what’s happened in the Central African Republic (CAR).

For the past two years, sectarian Christian and Muslim militias in CAR have been waging war against each other’s communities with horrific violence. Over 2,600 Central Africans have died, and nearly 1 million of the country’s 4.5 million residents have been displaced, creating an urgent humanitarian crisis.

Yet although the country is teetering on the edge of complete chaos, the outside world is paying very little attention.

An aptly named country in the heart of the African continent, CAR has a history shared by countries throughout Africa and the broader post-colonial world: colonization followed by independence and subsequent political turmoil.

Since gaining its independence from France in 1960, the small country has seen at least five coup d’états and numerous protracted civil conflicts, many of which have exploited the country’s ethnic, religious and regional divisions.

The latest unrest dates back at least to 2003. That year, former CAR army chief of staff François Bozizéseized the presidency from Ange-Félix Patassé, who had been CAR’s first democratically elected leader but whose rule had been marked by civil strife and upheld by foreign troops.

A civil war, known as the Central African Republic Bush War, broke out the following year when rebel groups attempted to overthrow Bozizé. The war raged for four years before a shaky truce was reached. However, violence resurged in December 2012, when rebel groups accused the government of not abiding by the peace agreements that were signed at the end of the Bush War.

By March 2013, the mostly Muslim Seleka faction had ousted Bozizé and installed Michel Djotodia as president, making him the majority-Christian country’s first Muslim leader. Yet this apparent political victory did little to stem the unrest the Seleka were sowing throughout the countryside. By June 2013, rampaging Seleka fighters had deliberately killed scores of civilians and destroyed 1,000 homes in Bangui and other provinces.

In an effort to distance himself from their violent crimes, Djotodia attempted to disband the Seleka militias last September, but many of them refused to disarm. The Seleka burned villages, looted homes and murdered civilians as swaths of the country descended into lawlessness.

The brutality of Seleka gave rise to the mostly Christian militias known as the anti-balaka. The new militias, whose name means “anti-machete,” proceeded to carry out their own violent reprisal attacks on Muslim villages, introducing a dangerous sectarian element to a conflict where civilians were targeted with increasing frequency.

Last December, the fighting dramatically escalated, with anti-balaka forces launching coordinated attacks on Seleka fighters in the capital city of Bangui. They also deliberately targeted Muslim civilians, including women and children. In retaliation, Seleka fighters murdered more Christian civilians. Amid the increasing sectarian violence around the capital and international pressure calling for him to step down, Djotodia resigned the following month.

The United Nations drafted a resolution authorizing France to send troops to the beleaguered nation last December. In April, as the crisis showed no signs of de-escalation, the Security Council voted unanimously to send 12,000 peacekeeping troops set to arrive in September, in addition to the 2,000 French soldiers.

Political developments inside CAR have so far done little to stem the violence. A tentative late July ceasefirefell apart after only a couple of days. In August, CAR elected its first Muslim prime minister, Mahamat Kamoun, but the Seleka fighters have rejected him and are refusing to join the unity government. Clashes continue while the fate of the people remains in the balance.

Women and Children First in Suffering

The human toll of the conflict has been considerable. A UN report from January found rampant violations of human rights, including extrajudicial killings, sexual violence, mutilations and targeting of civilians based on religion.

Much of this abuse has been directed at innocent women and children. Last December, for example, UNICEF reported the gruesome beheadings of two children and the mutilation of another.

Meanwhile, children fleeing the violence have fallen prey to disease and malnutrition while trekking across jungles to the relative safety of their neighbors’ lands. Many children are unable to return to school, while those lucky enough to attend have been crammed into overcrowded classrooms.

For women, the biggest fear remains sexual violence. The International Rescue Committee (IRC) opened up two women’s centers in early 2014 and interviewed 125 women and girls—the youngest being only 7 years old—who had come to the group for help. Of those 125, a startling 84 percent had been raped.

The prospects for rape survivors getting assistance remain grim. The combination of limited resources and a culture that typically remains silent in the face of sexual violence means that many women will never receive help.

Although both sides of this sectarian conflict have perpetrated horrific violence on militants and civilians, the anti-balaka fighters are currently the main perpetrators, according to Human Rights Watch. Alongside vicious attacks against civilians, anti-balaka fighters have pillagedand burned mosques in what Amnesty International has described as a campaign of “ethnic cleansing” in the western part of the country.

Some 300,000 Muslims have fled CAR altogether, while others remain in hiding, hoping that French and or African peacekeepers will be able to provide them with protection.

But it’s a fraught existence, even for those who find help. Earlier this year, neighboring Chad sent special forces to evacuate scores of Muslims from Bangui. Christians cheered as a convoy of trucks, sent to the airport and to mosques to pick up Muslim evacuees, left the city, headed towards Chad. When a Muslim man fell off the truck, he was attacked by a mob that cut off his hands and genitals.

A Wave of Refugees

The fighting is creating a displacement crisis that could grow to rival Syria’s if left unchecked.

As of July 2014, there were 528,000 Internally Displaced Persons (IDPs) in the Central African Republic—that’s 12 percent of the population—and 60 percent of the figure are children.

The European Commission’s Humanitarian Aid and Civil Protection department (ECHO) estimates that there are nearly seventy makeshift refugee camps in Bangui alone—including the M’Poko Airport, where nearly 100,000 people have gathered for safety. As security issues abound, the UN’s World Food Program has struggled to deliver food to M’Poko.

But outside of Bangui, information on the location and condition of IDP camps is extremely limited. Very few government officials or international observers are even present in the provinces outside the capital, making information difficult to gather.

Another 398,000 people have taken refuge in Chad, the Democratic Republic of the Congo and other neighboring countries, which are hardly paragons of stability or human rights themselves. (A Haitian saying—“running from the rain but falling in the river”—comes to mind.)

Meanwhile, CAR is facing a dire humanitarian situation. According to USAID, as many as 2.5 million people need immediate assistance, and 1.7 million people face acute food insecurity.

The World Is Not Watching

The international community hasn’t done nearly enough to alleviate the suffering in CAR. In 2013, CAR was the fifth most underfunded UN appeal and appeared in ECHO’s “Forgotten Crisis Assessment” in both 2012 and 2013.

In January of this year, the UN Office for the Coordination of Humanitarian Affairs (OCHA) released the Central African Republic Strategic Response Plan, requesting $551 million for emergency assistance. But according to OCHA’s financial tracking service, only about $366 million has been pledged by donors. Organizations that provide vital services, like the World Food Program, are still reporting substantial funding shortfalls.

Not only has the international community failed CAR, the media’s scant coverage of the crisis means that the average Westerner is wholly unaware of what’s happening in the country. Unlike for Gaza, there have been no marches or protests in support of humanitarian aid for the civilians in the Central African Republic.

“Unfortunately, there does not exist much political will to address human rights crises in Africa, even those on the grand scale and magnitude of what’s been occurring in CAR,” explains human rights activist and Africa expert Jeffrey Smith. “A case in point is the recently concluded US-Africa Leaders Summit, which did not address the underpinning issues of human rights or good governance in a meaningful or genuine way.”

Crises like the situation in Central African Republic “do not merely erupt spontaneously or overnight,” adds Smith. “They are quite often the result of long-term and routine human rights abuses that are left unaddressed.”

President Obama’s foray into Iraq has been billed as a humanitarian intervention. If the United States actually intervened in countries for purely humanitarian reasons, there would be millions of dollars in aid money and assistance for the country in the heart of Africa that is on the brink of collapse.