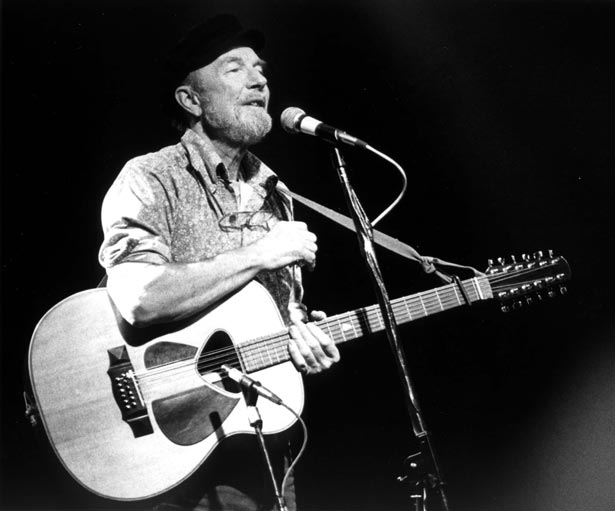 Editor's Note: Pete Seeger celebrated his 90th birthday in 2009; Katrina vanden Heuvel was among the many fans in attendance. We repost her dispatch now, on the occasion of Seeger's passing.

"You outlasted the bastards, man," Bruce Springsteen said as the crowd roared. That was my favorite line at the rollicking concert celebrating Pete Seeger's 90th birthday. There were other uplifting, astonishing moments during the five-hour concert May 3 at Madison Square Garden, which Seeger only OK'd because it raised funds for Hudson River Sloop Clearwater — a nonprofit he started in 1969 to clean up his beloved, polluted Hudson River.

Fifteen thousand people of all ages danced, clapped and sang along as Seeger did a soaring version of "Amazing Grace" and the saintly-looking Joan Baez  sang "Where Have All the Flowers Gone?" Ruby Dee entranced with her reading of a poem for peace written by Seeger's uncle. In between, a startlingly youthful  Emmylou Harris recounted correspondence she'd had with Seeger as a young folk singer; Tom Morello and Taj Mahal teamed up on "Waist Deep in the Big Muddy"; and John Mellencamp offered up "If I Had a Hammer."

Toward the end, Springsteen announced to the crowd, "Pete's gonna come out…. He's gonna look like your granddad if your granddad could kick your ass." Seeger looked all of 25–of strong backbone and spirit and moxie and with keen eyes, which are the stronger for having seen the best, and the worst, of our country's history. As Springsteen said, Pete has a "stubborn, nasty, defiant optimism"; he's like "the stealth dagger through the heart of our country's illusions about itself." Springsteen also talked about growing up in a town that endured race riots. He said Seeger transformed "This Land Is Your Land" from a labor anthem to a civil rights anthem, and he described preparing for their duet of the song at Obama 's inauguration. Seeger said to him then, "I know I want to sing all the verses, all the ones that Woody wrote, even the two that usually get left out."

"There was a big high wall there that tried to stop me/Sign was painted, it said private property/But on the back side it didn't say nothing/That side was made for you and me." It seemed that there was enough humanity in that one hall to fill all of the nation with amazing grace. As New Jersey's and the nation's bard summed it up: "Pete sings all the verses, all the time, especially the ones we'd like to leave out of our history as a people."