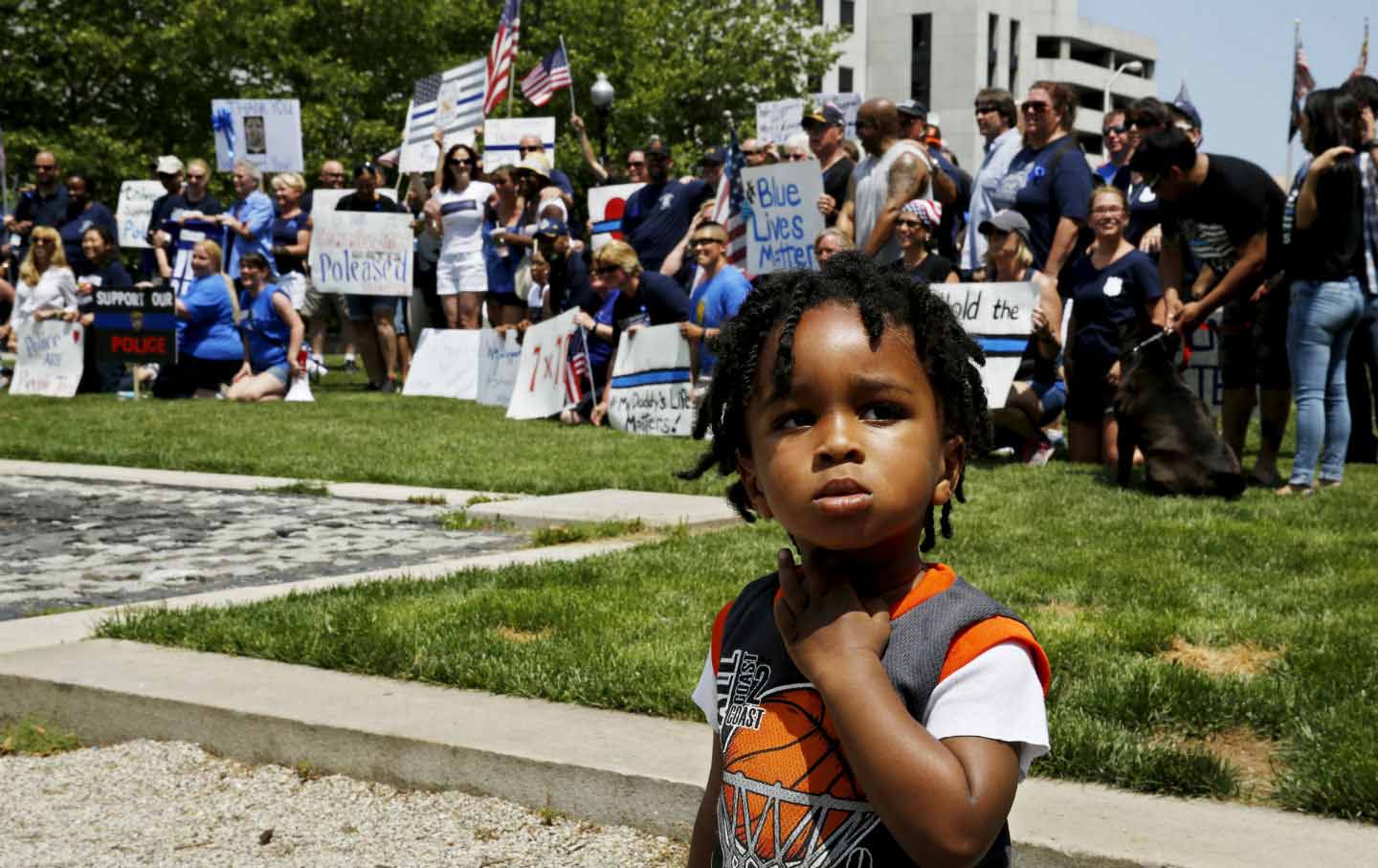 King Walker stands in front of police officers and their supporters at the conclusion of a “Blue Lives Matter” rally in Baltimore, Maryland, on May 30, 2015. (Reuters / Jim Bourg)

Two weeks ago, the New York State Senate passed a so-called “Blue Lives Matter” bill—a law that makes offenses against police and first responders a hate crime. Forms of such legislation have been introduced in at least 14 states since the beginning of 2016. There is little chance that New York’s bill will pass through the state assembly, where Democrats hold a majority, but the sentiment behind the proposed legislation—that police officers need another layer of protection beyond that which they are already afforded—has raised concern among civil-rights advocates and in heavily policed communities.

So far, two Blue Lives Matter bills have been signed into law: The first was passed last May in Louisiana, and the second just two months ago in Kentucky. Hate crimes laws often increase the sentence imposed on the offender, but, more than that, they are symbolic. “Most hate crime statutes protect against groups that have historically been targets of bigotry; hate crime statutes across all states most commonly prohibit crimes based on race, religion, and ethnicity,” writes Jessica Henry, a justice-studies professor at Montclair State University. Is that the case for police officers?

“If New York wants to send a message that black lives don’t matter unless they’re cops, this is the best way to do it.”

“There have always been individuals in the United States with an inclination to perpetrate unprovoked attacks against police officers merely because they’re police officers, out of hatred,” Jim Pasco, senior adviser at the Fraternal Order of Police, told The Huffington Post in March. “And that type of violence, incidentally, is growing at exponential rates.” “Exponential rates” is inaccurate. There were 63 gun deaths in the 145 total law-enforcement fatalities in 2016, which was a 56 percent increase from the year before—but not unprecedented; 68 officers died in the line of duty by gun in 2011. Overall, police fatalities for 2016 were still lower than the average for the previous 10 years, reported NPR. “There’s clearly not a problem,” said civil-rights attorney Jonathan Moore, “and so these bills are a colossal waste of time and energy.” “There is no need for this and there is no evidence that police have been injured more because of anti-police sentiment,” said Jeffrey Robinson, deputy legal director of the ACLU. “This is not going to make one police officer in America any safer.”

But it’s also not true that police officers have been targets of bigotry in the way that those whom hate-crime laws seek to protect have. The 1968 Civil Rights act made it a crime to “willfully…injure, intimidate or interfere with—any person because of his race, color, religion, sex, handicap, familial status, or national origin.” Robinson says hate-crime legislation should and has historically been used for victims and communities who have not been properly protected by the law. For black Americans, he said, hate-crime laws have made sense, though conviction rates for hate crimes remain incredibly low. Between 2010 and 2015 a total of 270 hate crimes were referred to federal prosecutors across the country and 230 of them weren’t ever even prosecuted. During that five-year period, only 29 people were convicted of a hate crime. Meanwhile, every state in America has an increased penalty for those who attack law enforcement.

Killing a police officer can result in life imprisonment—just last month a New York man was sentenced to life for killing an NYPD officer. And killing a federal law-enforcement official can be punishable by death. “It’s counterproductive to add a hate crime statute,” said Michael Lieberman of the Washington Council for the Anti-Defamation League. With a hate crime, Lieberman explained, the intent of the offender must be proven in a court of law, a standard of proof that actually makes it more difficult to get a conviction. He suggested strengthening existing protections for police instead of adopting legislation that makes offenses against police a hate crime. Moore, who worked on the landmark case that ruled New York City’s stop-and-frisk policy unconstitutional, says that police “get so much the benefit of the doubt from juries and legal immunity,” he said. Officers, he said, can avoid liability even when the court finds that their conduct violated the constitution if they say they didn’t know what they were doing was wrong. “[Law enforcement] get two bites of the apple, we don’t generally even get one.”

Another troubling aspect of the Blue Lives Matter bills is that they’re incredibly vague. “There’s nothing in the language of New York’s bill that limits the type of offenses which may be perpetrated against the police officer that could be elevated to a hate crime,” said Moore. “It could include any felony or misdemeanor under the state of New York.” That means a person could be charged with a hate crime for something like resisting arrest.

In Louisiana, “resisting arrest” did come up as a potential offense covered under the hate-crime law. “Resisting an officer or battery of a police officer was just that charge, simply. But now, Governor Edwards, in the legislation, made it a hate crime now,” said Police Chief Calder Hebert of St. Martinville, Louisiana, to a local TV station. Later, the governor clarified that this was not an intended component of the law. “Resisting arrest is not considered a hate crime under the legislation spearheaded by Rep. Lance Harris,” said a spokesperson for the Governor. “The law clearly defines what is and is not a hate crime, and it appears that the police chief is inaccurate. Neither the bill’s author nor the governor agrees with his assessment.” Hebert later clarified to the TV station that his officers “absolutely understand the difference between resisting arrest and a hate crime,” but stood by his original comments.

In the year that Louisiana’s law has been on the books, there have been at least two separate attempts to charge individuals with hate crimes against police. Raul Delatoba was booked last September after he was arrested for yelling racial and sexist epithets at police officers and damaging a window at the Royal Sonesta Hotel in New Orleans. Frenwick Randolph, also in New Orleans, told a 911 dispatcher that he would “shoot and kill any officer” who responded to the call. The district attorney declined to pursue charges in both cases.

If there are already far-reaching protections for police officers in all 50 states, why are states pursuing this legislation? The answer, of course, is politics. “If New York State wants to send a message that black lives don’t matter unless they’re cops, this is the best way to do it,” said Vince Warren, Executive Director at the Center for Constitutional Rights, a legal advocacy organization. “At their core, ‘Blue Lives Matter’ bills like this one seek to turn Black Lives Matter protesters into enemies of the state.” Warren said that the proposed bill “gives the police added incentive to claim an assault when being lawfully confronted by protesters, which will deter legitimate protest even when those assaults don’t actually happen.” So, beyond these bills being redundant, they also have the potential to detract peaceful protesters from gathering. “You’re supposed to pass bills to address problems,” said Moore. In this case, he adds, “There’s no need for it.”