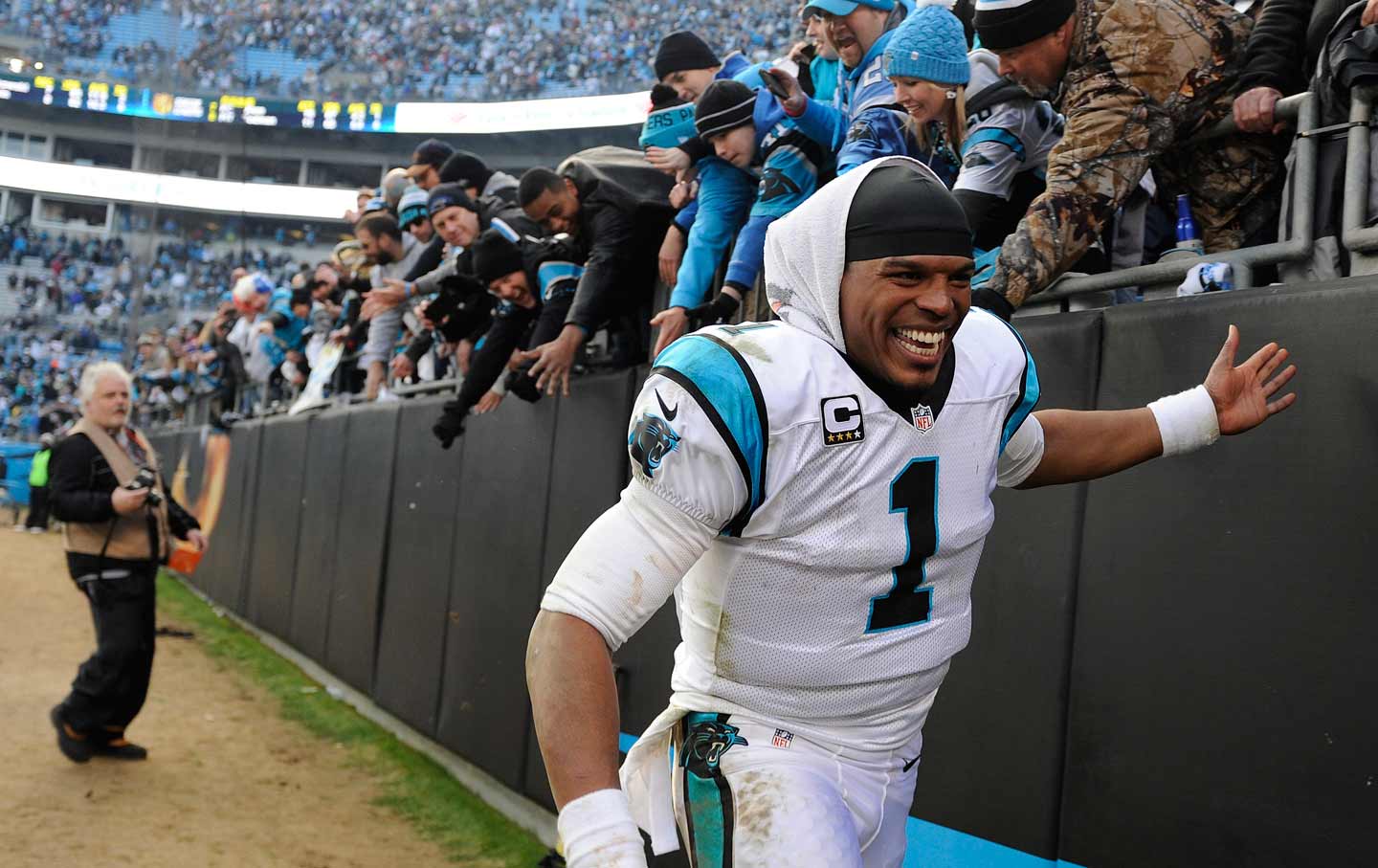 I’ve written it before, I’ll write it again: There are two categories of “political athletes”: the “explicit” and the “representative.” The “explicit” are people like Muhammad Ali, Billie Jean King, or, more recently, Serena Williams and LeBron James: people who leverage—and risk—their cultural capital to speak out against the ills they see in the world. Then there is the “representative”: those whose very appearance, ethnicity, gender, or sexuality challenges the broader society to confront their own prejudices. Think about how the mere presence of Jackie Robinson or Gaby Douglas sent shock waves for no reason other than that they were in front of a skeptical or even hostile audience and excelled.

For years, Carolina Panthers quarterback Cam Newton has been ensconced in that second category: a representative athlete who sent hackles up the spines of fermenting sports writers and racist football fans. It has not been merely that he is a black quarterback. We are—some social-media eggs aside—past that point where being a “QB while black” creates a frenzied reaction. But Cam has not just been “a quarterback who happens to be black.” He plays with a joy and flair that rankles “traditionalists” who believe that being QB means you have to have a constant grimace on your face, or at least some approximation of Tom Brady’s perpetually constipated visage. Cam smiles. Cam dabs. Cam is choosing to play quarterback in a way that is consistent with the person he is when the helmet comes off, and his entire team clearly feeds off of his utterly authentic joy. Yet that combination of being unapologetically young, black, and gifted has earned him highly racialized critiques of being “arrogant,” “flashy,” or a “bad role model.” This is a slight evolution from the “concerns” sports writers raised before he was drafted about his “intelligence” and “attitude.” I’ve covered previously why those arguments are absurd. His attitude and intelligence are above reproach. As for arrogance, Aaron Rodgers, Brady, and Peyton Manning wear their vanities like a full-length mink coat without criticism. It’s all a dog whistle, yet one so shrill that it pierces ears beyond the canine persuasion. The message spread by these whistling quislings has been, “Be black if you must. But be quiet about it.”

Cam Newton’s refusal to conform to a muted mode of behavior has made him involuntarily political just by being himself.

Yet, on the eve of his first Super Bowl, Cam is getting explicit. In his first Super Bowl press conference, he was asked why he has become a “lightning rod” for criticism—a question maybe not as bad as when Doug Williams was allegedly asked in 1988 how long he had been a black quarterback (answer: “all my life”) but still something that no white Super Bowl quarterback, no matter how polarizing (Ben Roethisberger) has ever been asked.

Cam could have ducked this with the ease he dodges linebackers. Instead, he plucked everyone’s card, saying, “I’m an African-American quarterback that may scare a lot of people because they haven’t seen anything they can compare me to.”

And there it is. Cam Newton has thrown down with his version of Muhammad Ali’s famous phrase, “I don’t have to be who you want me to be,” and it could not have come soon enough.

People are already recoiling at Cam’s “injecting race” into his answer, but that is like blaming a meteorologist for the rain. While some reach for the fainting couch, it is far more instructive to note those celebrating his words: a celebration that demonstrates the political space opened by such a statement. Former NFL player Domonique Foxworth said on ESPN’s normally antiseptic radio show Mike and Mike in the Morning that it reminded him of W.E.B. Du Bois’s writings on “double consciousness,” and spoke at length about how proud he was that Cam has staked ground as someone who refuses to live that double life, where he is one person in front of powerful Caucasians and another with his friends and teammates. I’m going to venture, without research, that this was the first Du Bois reference on Mike and Mike.

When one takes a step back, it’s stunning: The same player who before his rookie season Sports Illustrated’s Peter King infamously branded as a phony who would make old-school coaches “blanch,” is showing in practice that he might be the most authentic person in sports. As he made clear at the press conference, “People are going to say whatever they want to say. And if I’m in this world living for that person…then I can’t look at myself and say I’m Cam Newton, or Cameron Newton to most people, because I’m not. Because I’m living for you.”

This is an athlete taking the cultural capital earned by a Super Bowl appearance and using it to open more space for anyone who wants to live life as their actual selves: no hiding, no false fronts. Cam Newton is building a bridge before our eyes from the “representational” world to the “explicit.” He is building a bridge with the kind of foundation that will encourage others to follow him across.