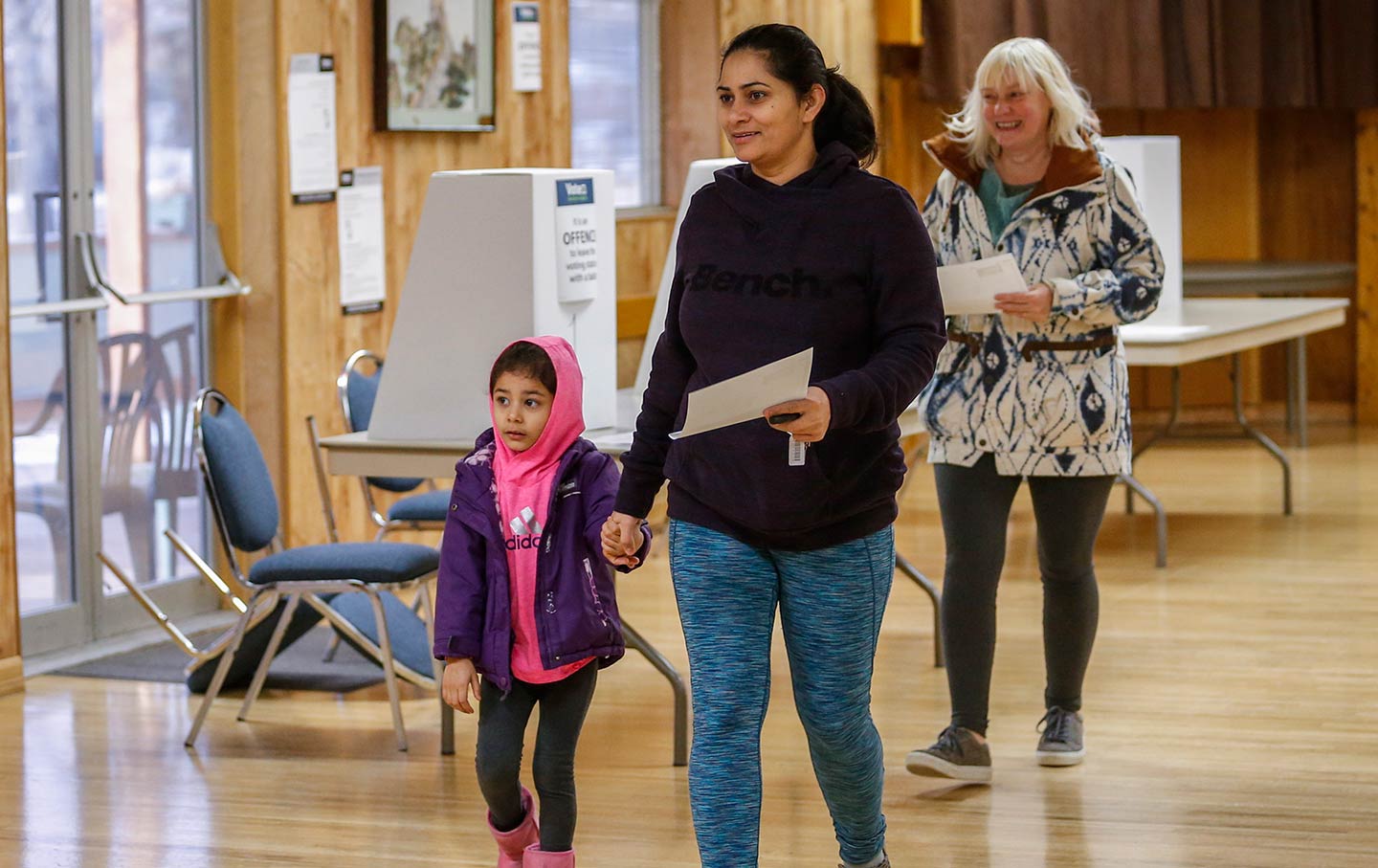 Calgarians votes in a plebiscite, November 13, 2018, in Calgary, Alberta, on whether the city should proceed with a bid for the 2026 Winter Olympics. (AP Photo via The Canadian Press / Jeff McIntosh)

Ding dong, another Olympic bid is dead. On Monday, the Calgary City Council voted unanimously to kill the city’s bid for the 2026 Winter Olympics. This follows last week’s public plebiscite where 56 percent of Calgarians said no to hosting the Games.

In the bid cycle for the 2026 Winter Olympics, Calgary is the fourth public referendum to scupper the Games, following Innsbruck, Austria and Graubünden and Sion, Switzerland. Sapporo, Japan, recently withdrew its bid for 2026, as did Graz, Austria, when it became apparent to boosters that they would lose a public vote. Last month honchos at the International Olympic Committee nixed an egregiously weak bid from Erzurum, Turkey.

All this means only two bids for the 2026 Winter Games remain standing, and even they are on wobbly legs. Stockholm and a dual bid from Milan and Cortina d’Ampezzo are still in the running, but neither has secured firm government backing.

Activists in Calgary deserve the credit for saving their city from a corporate-welfare bonanza. They ran a steadfast, fact-driven campaign to derail the Games. They focused on expenditures, including security costs, which they argued were low-balled and sure to escalate, as well as the opportunity costs of the Games—money spent on the Olympics would be funds swiped from other vital social programs like education and health care. They stormed social media, engaged in public debates, lobbied elected officials, and wedged their message into the media. They won solidarity from anti-Olympics organizers in Boston who successfully torpedoed Beantown’s bid for the 2024 Games and from NOlympics LA activists who are ensconced in a battle against the 2028 Summer Games slated for their town. As for their opponents, their “trump card” wasn’t facts or analysis but “Eddie the Eagle,” aka Michael Edwards, the hapless British ski jumper who was the clown-prince darling of the 1988 Calgary Winter Games. It also spoke volumes that Evan Woolley, chair of the City Council’s Olympic and Paralympic Winter Games assessment committee, said he was not comfortable supporting the Games.

One might think that bigwigs from the IOC would humbly reflect on the stinging loss in Calgary and the wider political history of the Olympics in order to consider how to modify their sports spectacle to better meet the needs of host cities and to address the slate of criticisms that bubble up in the public sphere.

But the IOC isn’t big on self-reflection. Instead, in response to Calgary’s plebiscite, the IOC issued a statement that was riddled with flippancy and contempt. It acknowledged the result and claimed, “It comes as no surprise following the political discussions and uncertainties right up until the last few days,” as if it were “uncertainties” that swayed voters and not concrete fact patterns that clearly show that hosting the Olympics means debt, displacement, militarization, and false promises.

Then, deploying a passive-aggressive, blame-the-victim approach, the IOC went on to say, “It is disappointing that the arguments about the sporting, social and long-term benefits of hosting the Olympic Games did not sway the vote.” In short, like a diehard huckster, the IOC insisted that it’s doing nothing wrong and that the dullards in Calgary simply weren’t bright enough to see the many benefits that the Olympics would have brought to their city.

The IOC can cram its fingers in its ears until June 2019 when it selects the host for the 2026 Winter Olympics—if there are any bids still in the running then—but some hard facts point in a very different direction.

For starters, only one of the last nine public referendums on the Olympics has broken in the IOC’s favor. In 2013, voters in Oslo, Norway, supported a bid for the 2022 Winter Games only to have that bid withdrawn the following year because of anemic political support.

With the last three Olympic bid cycles, only two cities have been left standing. Last year, that forced the IOC to make a Hail Mary move, simultaneously allocating the 2024 Summer Games to Paris and 2028’s to Los Angeles, an unprecedented act made more from desperation than deliberate planning.

In both Paris and LA, locals would have loved the luxury of a public vote—as happened in Calgary and elsewhere—rather than having the Games crammed down their collective gullet. In Los Angeles, a recent poll commissioned by NOlympics LA activists suggests that the 2028 Games don’t have the levels of support that boosters claim. The central lesson from Calgary is that all aspiring host cities should be required to organize referendums on hosting so everyday people, the ones who must bear the weight and cost of the Olympic leviathan, have a fair chance to be heard