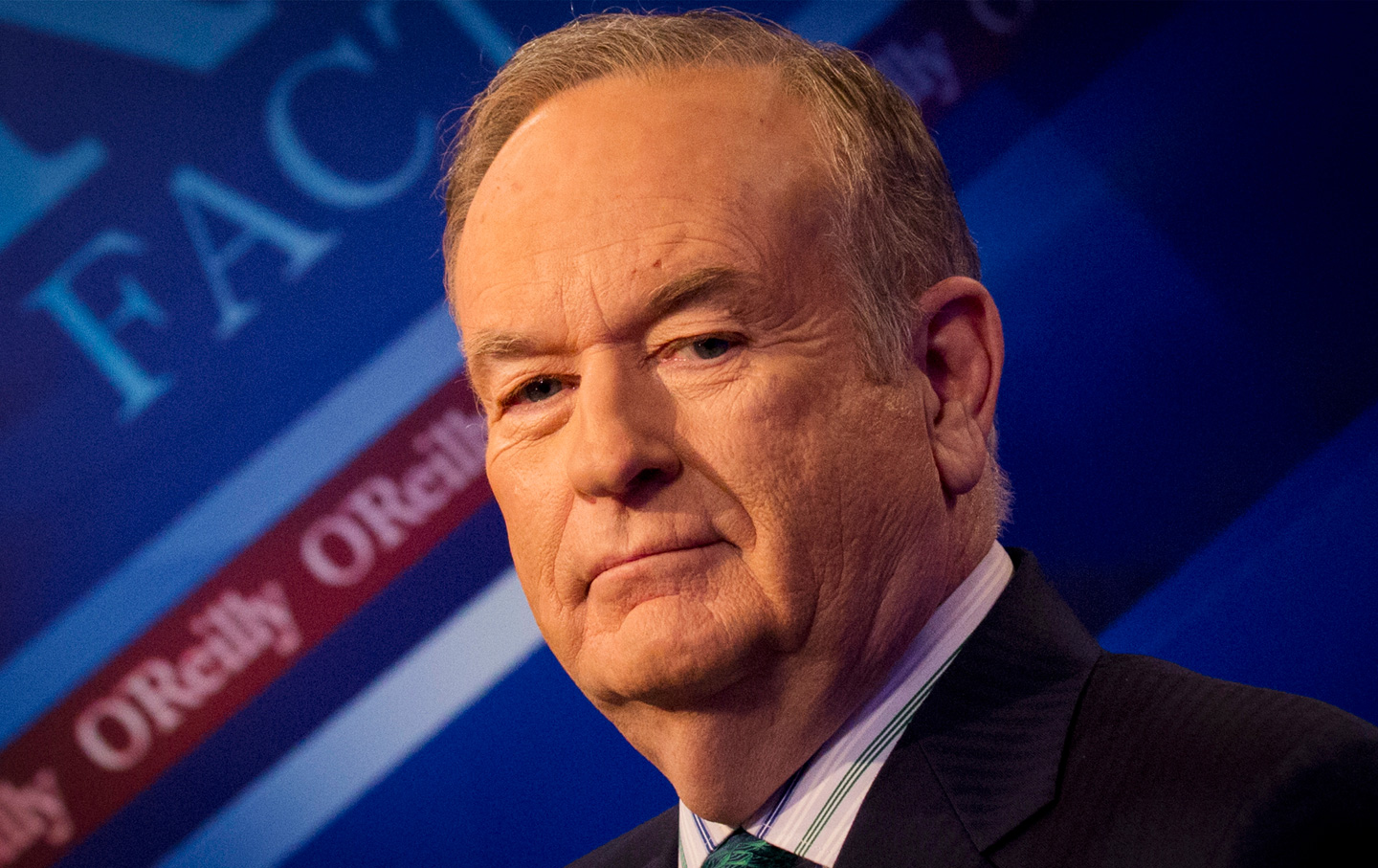 What does it mean that the lout in the White House got there despite boasting about his sexual misdeeds, while two Fox News misogynists behind his rise have now been brought down by theirs?

I don’t know, but it vexes me. Perhaps culture rides ahead of politics? Nonetheless, let’s celebrate the end of the career of Bill O’Reilly: bully, alleged serial sexual harasser, and creepy hypocrite who preached against sexual liberation, gender equality, and racial justice while possibly harassing an entire rainbow generation of women.

Together, O’Reilly and his former boss Roger Ailes created a white, patriarchal television oasis for the aging holdouts against a rapidly diversifying America, one where white men were again safely in charge and women, even talented ones, were for decoration, most of them leggy, blonde, and deferential. The two shaped a paranoid right-wing political culture that demanded the creation of a character like “President Donald Trump”–even if Ailes was said to be anxious about his creature’s rise in the GOP last year, and O’Reilly, supportive while also a bit condescending and paternalistic, sometimes seemed jealous of him. But Ailes is gone, and today O’Reilly is getting the door slammed on his ass. Fox finally dumped them both, after spending tens of millions of dollars paying the multiple women who came forth with accounts of harassment, including the latest—an African-American clerical worker who says O’Reilly called her “hot chocolate” and would never speak to her except to grunt at her like a wild boar.

But even as we mark O’Reilly’s downfall, let’s grapple with the damage he’s done—in greasing a path to the White House for Trump, of course, but also in the lives of individual people in the culture of bullying and violence he leaves behind.

I’ve faced a lot of criticism, even abuse, on social media over the years. But the only time I was genuinely afraid for my own safety, and my daughter’s, was after I debated O’Reilly in June 2009, about the murder of Dr. George Tiller—Lutheran deacon, husband, father, grandfather, and abortion provider—in the hallway of his Wichita, Kansas, church. O’Reilly had trashed Tiller, usually as “Tiller the Baby Killer,” in 29 segments of the O’Reilly factor over four years. I’d suggested on MSNBC that O’Reilly ought to ask whether his violent rhetoric might have contributed to Tiller’s murder. He had said that Tiller “destroys fetuses for just about any reason right up until the birth date for $5,000” was guilty of “Nazi stuff,” and that anyone who prevented the state of Kansas from stopping Tiller “has blood on their hands.”

I stupidly went on O’Reilly’s show to defend myself. I’m just going to leave the link here. I just watched it for the first time in seven years, and it was still harrowing: his mounting rage, plus the repetition that I had blood on my hands, too. At the time, at first, it was all in a day’s work for me—I’ve debated a lot of misogynists on MSNBC. Then the e-mails poured in, and the snail mail, too. Many men had violent suggestions as to what I might do with myself. They had many creative ways to dispense with me. And with my daughter, too.

That was my first experience with the underground of men who were mobilizing against women’s freedom, all of them apparently galvanized by the election of Barack Obama, which made little sense unless you knew the history of racist misogyny that came together in fear of miscegenation in the 19th century. There was new danger on the loose. I had noticed the guns at Obama rallies. I had seen a black man murdered by a white supremacist at the Holocaust Museum in Washington, DC. I had heard about the Pittsburgh police shootings by a white supremacist whose friends told reporters, “Rich, like myself, loved Glenn Beck,” the Obama-hating Fox host who rose to right-wing glory that year. I had written about all of it, but it had never before been aimed at me.

Nothing happened. I lived—thrived, in fact, as did my daughter. But nothing acquaints you with the notion that your ideas are more than just intellectually dangerous than people telling you they want to hurt you. I did have to learn that what I got weren’t “death threats.” In order for something to be a death threat, I was told, they have to say they intend to kill you, not merely that they want you dead.

The powers that be at Twitter have essentially told me the same thing when I report violent tweets to them. But still, tweets of violence don’t feel as threatening as either e-mail to your personal inbox or snail mail to your office. No one ever wrote these threats to my home, for which I am grateful. And as I write that, I realize I’m wanting to minimize the threat I felt, or should have felt.

At the time, I didn’t calm myself by saying none of this violent male-mail came to my home. At the time, I was scared. My friends told me to call the police and alert them. Instead, I went on vacation, to Arizona, where my daughter worried at the airport: “Mom, this is a sort of conservative state. Do you think someone will recognize you?” No one did. There are a lot of Democrats in Arizona, too. And not all Republicans are O’Reilly reactionaries, and even of those, very few of them are violent. Still, I stayed a little bit on alert that week.

Here I am, almost eight years later. If I didn’t have plans tonight, I’d go celebrate outside of Fox News in midtown.

I can observe, however, that the aforementioned Glenn Beck hung on to his show at Fox, spewing poison to retirees at 5 pm, even after advertisers ditched him, because alleged serial sexual harasser Roger Ailes did not want to give his critics the satisfaction of seeing Beck canned—until he finally had to can him. The Murdochs took one look—or maybe two—at their loss of more than 50 major advertisers (plus more sexual-harassment complaints, we should acknowledge) and concluded that O’Reilly’s April vacation should be permanent.

Ailes protected O’Reilly too, of course. I’ll never forget the night Salon’s beloved executive editor, Gary Kamiya, came out of his office reading the deposition of former O’Reilly employee Andrea Mackris, about the loofahs and the falafels and O’Reilly’s abhorrent abuse—until we told him to write it up as a story, and I was the one who had to read it to him (in 2004, we didn’t have scanners or any way to just lift the passages from The Smoking Gun). I still won’t use a loofah.

So we have been watching this serial misogynist and alleged sexual harasser, this angry white patriarch, for a long, long time. Ailes protected him even after he dumped Beck; even after Gawker revealed O’Reilly had lost custody of his children when his ex-wife showed evidence that his son and daughter watched him drag her downstairs by the throat—and understandably, the kids didn’t want to spend time with him anymore. Ailes dumped Beck, but O’Reilly got to stay. It’s clear there was a double standard: Beck lost his show because his overall crazy hurt the brand, but O’Reilly’s angry white man shtick—including his abuse of women and children—in fact was the brand.

Now the younger Murdochs are trying to change the brand, and they are about to cut O’Reilly loose. Political activists outside, and to their credit, women inside Fox, have made both this and Ailes’s departure happen. The ever-knowing Fox chronicler Gabriel Sherman at New York magazine had earlier reported that Rupert Murdoch and his son Lachlan were against dumping O’Reilly, while Lachlan’s brother James wanted the high-rating bully to cease darkening the doors of 21st Century Fox. But now, Sherman reports, “Lachlan Murdoch’s wife helped convince her husband that O’Reilly needed to go, which moved Lachlan into James’s corner.”

So women have prevailed against O’Reilly, and earlier, against Ailes. We failed to stop Trump—especially we white women, as I’ve mourned since November 9. Trump must be next, but for now let’s celebrate the departure of his enablers. Trump now has power Ailes and O’Reilly never did, but women—and men of conscience—now know what the stakes are. O’Reilly taught some of us the hard way, but many of us have learned from those lessons. Let’s make sure we all take in the danger of the white male patriarchal paradise Ailes and O’Reilly created, so we can make sure Trump can’t spread it beyond the confines of one loathsome cable channel.