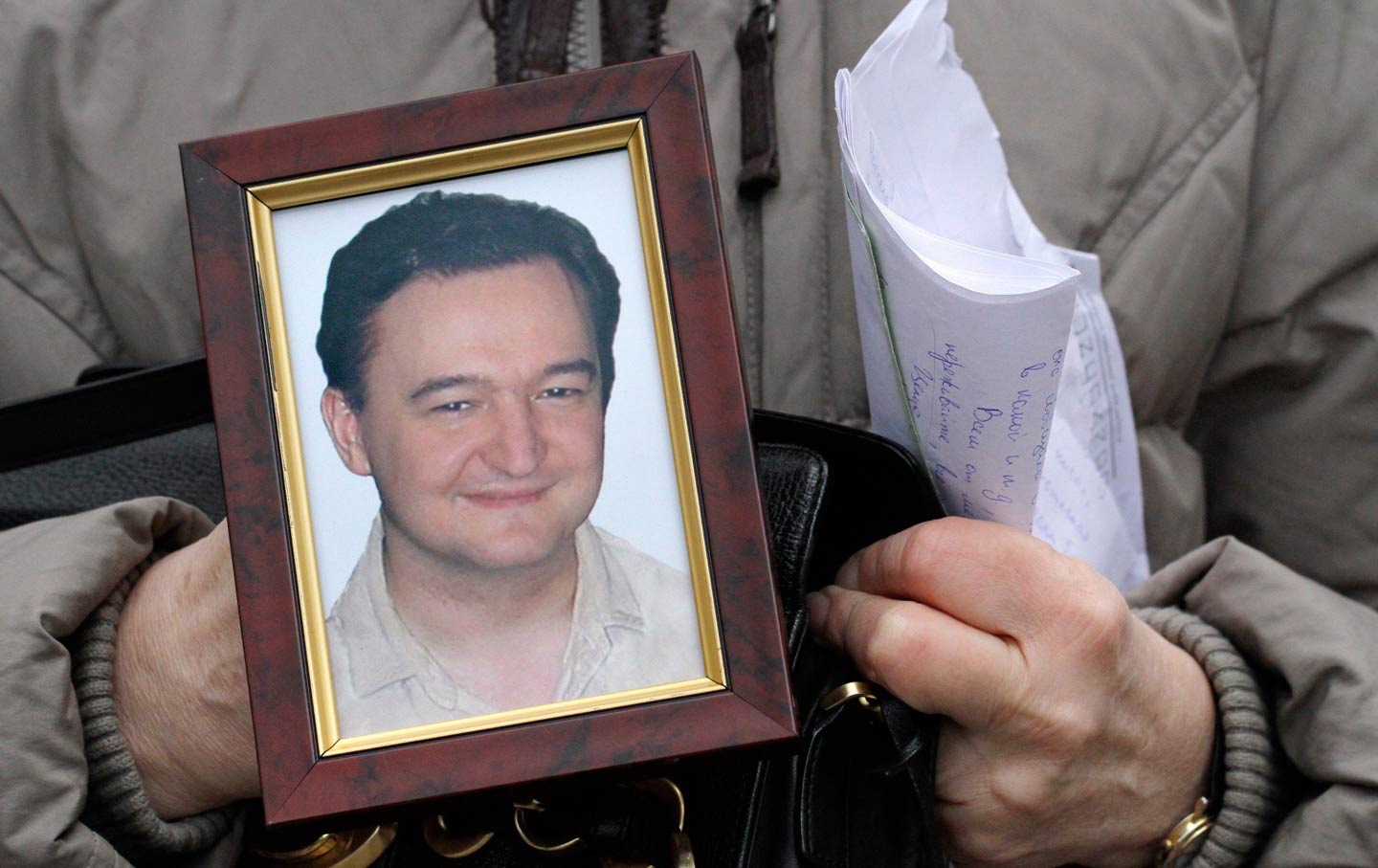 A portrait of lawyer Sergei Magnitsky, who died in jail, is held by his mother, Nataliya Magnitskaya. (AP Photo / Alexander Zemlianichenko)

In November 2009 a Russian accountant, Sergei Magnitsky, then in the employ of a Russia-based British hedge-fund manager, William Browder, died in a Russian prison under what are widely believed to be suspicious circumstances. In Browder’s telling, Magnitsky died at the hands of Russian investigative authorities after he had uncovered their theft of $230 million in tax payments from Browder’s investment fund. Browder, an American by birth who renounced his citizenship in 1998, subsequently launched a highly publicized campaign ostensibly meant to shine a light on Magnitsky’s whistle-blowing heroics, decry the corruption of the Russian government, and in the process strike a blow against Russian President Vladimir Putin.

In the years since Magnitsky’s death, Browder, the grandson of former Communist Party USA Chairman Earl Browder, has undergone a remarkable transformation: from a vocal supporter of Vladimir Putin who applauded the imprisonment of Mikhail Khodorkovsky, into a “human rights” crusader with loyal constituencies among journalists and policy-makers in Washington. Browder’s incessant lobbying resulted in the 2012 passage of the Sergei Magnitsky Rule of Law Accountability Act, which places sanctions on individuals believed to be responsible for Magnitsky’s death. The passage of the Magnitsky Act presaged the precipitous decline in US-Russian relations that followed and resulted in the Russian government’s ban on American adoptions soon thereafter. As The Nation pointed out in December 2012, the Magnitsky Act “recklessly and needlessly jeopardized US-Russian cooperation in vital areas from Afghanistan and the Middle East to international terrorism and nuclear proliferation.”

And now a controversial new film, The Magnitsky Act—Behind the Scenes, by Russian filmmaker Andrey Nekrasov, is questioning Browder’s version of events and in the process raising troubling questions about the ability of a wealthy hedge-fund manager to get Congress to do his bidding. In a very real sense, what Browder accomplished with the Magnitsky Act is the privatization of US foreign policy.

At a screening of the film at the Newseum in Washington on Tuesday night, the legendary journalist Seymour Hersh said that he believes the film “goes a long way toward deconstructing a myth.” Browder’s legions of neocon cheerleaders—some of whom were present at the screening—have tried to paint Nekrasov as a pawn of Russian intelligence, or, in the words of one attendee, “a foot soldier of the propaganda war.”

Yet, given the filmmaker’s history of taking on Putin in films about the death of Alexander Litvinenko and the wars in Georgia and Chechnya, such accusations are hard to take seriously. According to Nekrasov, “I am a critic of the Russian authorities” but in his opinion, “the West made a mistake by adopting the Magnitsky Act…as they are based on a made-up story.”

The film itself is an uneven affair. The first half is centered around a cringe-worthy reenactment of Browder’s version of events and an overlong explanation as to how Nekrasov came to see things differently, featuring plenty of shots of the filmmaker pensively looking out the window, nervously pacing around hotel rooms—that sort of thing. But the film picks up in the second half, as the filmmaker begins to document the grave inconsistencies embedded within Browder’s narrative. It makes for riveting viewing.

At the end of the film, when Nekrasov confronts Browder with his findings, Browder ends the interview, stands, and makes a none-too-veiled threat, warning Nekrasov that his “FSB tactics” are “not going to go well for you.”

That the film was shown at all is something of a story in itself. In April, Browder was able to stop a screening of the film for a group of European MPs in Brussels. His attorneys also successfully shut down a screening in Norway and Arte, a German-French television network, also canceled plans to run the film. Upon seeing the film, one can easily understand why Browder and his attorneys would go to such lengths.

Yet, in playing host to the event, the Newseum deserves great credit for sticking to its principles. As The New York Times reported last week, Scott Williams, the chief operating officer of the Newseum, said “we stand for free speech and free expression.”

Hersh told the audience before Tuesday’s screening, “This is a core issue about getting points of view into the public domain.” Yet not everyone sees it that way. Two analysts from the NATO and US government–funded Atlantic Council recently complained that the “Newseum did what the European Parliament was too principled to do: it showed The Magnitsky Act.”

In light of the controversy brought about by the film, it might be worth asking whether legislation like the Magnitsky Act is the proper response to human-rights abuses abroad. On Wednesday, the Senate passed an appropriations bill including the so-called Global Magnitsky Act, which, if signed into law, would replicate the Russian-centric version by allowing the US government to target “human rights” abusers worldwide.

Yet the move toward a Global Magnitsky Act is troubling, because the original version of the act, as Nekrasov’s film makes clear, was passed solely on the strength of the questionable accusations of one man. The question which then arises is this: Should ultra-wealthy foreign nationals like Browder be able to transform their personal vendettas against foreign governments into law?

In this respect the film provides a valuable service by asking how it is that American (and European) officials bought Browder’s story without doing even the slightest due diligence. The American and European legislators who took Browder’s version of events on faith now look credulous, at best.

And so, a reexamination of both Browder’s case and the geopolitical ramifications of the original Magnitsky Act by the media and Congress is urgently needed before the Global Magnitsky Act arrives on the president’s desk. Otherwise, we risk setting off yet another damaging cycle of sanctions and counter-sanctions toward no good end.