A railroad overpass in Houston, Texas, 2010. (Photo by Patrick Feller / Via Flickr)

Lot, the debut short-story collection by Bryan Washington, is about people in Houston, Texas, who are struggling to get by, as well as the structures, communities, and strategies that either support or undermine them. In other words, Lot is made up of what cities are made of. Washington’s stories often center on queer men of color, families struggling with poverty, and undocumented immigrants—which is to say, the very people who help to make a city diverse and yet are often relegated to the background in other narratives. In Lot, Houston emerges as a beautiful but flawed place, slowly pushing these residents out on two fronts: the creeping growth of new-money developments taking up more and more space, and the punishing (and worsening) weather in the form of heat and hurricanes. Washington zeroes in on the pressure this puts on families and individuals, examining these forces through their eyes, working to understand how they either resist or succumb to them.

There are 13 stories in Lot; seven focus on a single family, and the rest on other characters who share the city with them. The book opens with “Lockwood,” which is also the first story in the threaded family narrative. At this point, the unnamed narrator (the point-of-view character in most of the linked stories) is in his early teens. He strikes up a friendship with Roberto, a next-door neighbor who is a few years older. Roberto and his family are undocumented and poor, and doing their best under the circumstances. “[His dad] worked construction, pouring cement into Grand Parkway, and they didn’t have any papers so you know how that goes. No one was hiring. [His mother] wasn’t about to take any chances.” The narrator’s parents own a restaurant, and his mother gives Roberto and his family food when she can. Her husband, who is quickly revealed to be a cheater but at this point is just a jerk, sees this act of generosity as nothing more than tossing good money down the drain. In the midst of these tensions, the narrator and Roberto are growing closer.

Later in “Lockwood,” after the two teens’ relationship becomes sexual, their search for privacy becomes a way for Washington to introduce some of the city’s geography. “We touched in the park on Rusk,” the narrator says. “By the dumpsters on Lamar. At the pharmacy on Woodleigh and the benches behind it.” There is nothing exhibitionist about their public sexual encounters; the narrator and Roberto are seeking safety and refuge, not thrills. Washington’s use of street names, as one resident might with another, recurs throughout the book and is a wonderful tool for establishing Houston in the minds of his readers. By cataloging the street names, Washington invokes on a block-by-block level the same ideas he explores citywide: His characters search for a private space and find it, but this kind of space is scarce, and there’s a feeling that it’s getting scarcer as their neighborhood shrinks around them; in addition to the economic conditions changing the neighborhood, their queerness further reduces the number of safe locations for them. At the end of “Lockwood,” Roberto’s family disappears one morning without warning. A space for them no longer exists, because when the cement pouring is done, there is no other job in the offing for Roberto’s father. Elsewhere in this collection, Washington revisits the precarity of living in the United States without documents and working in an illicit field, and he consistently does so with precision and warmth, illuminating the toll that it takes on his characters as well as the structures that create this unnecessary insecurity in the first place. 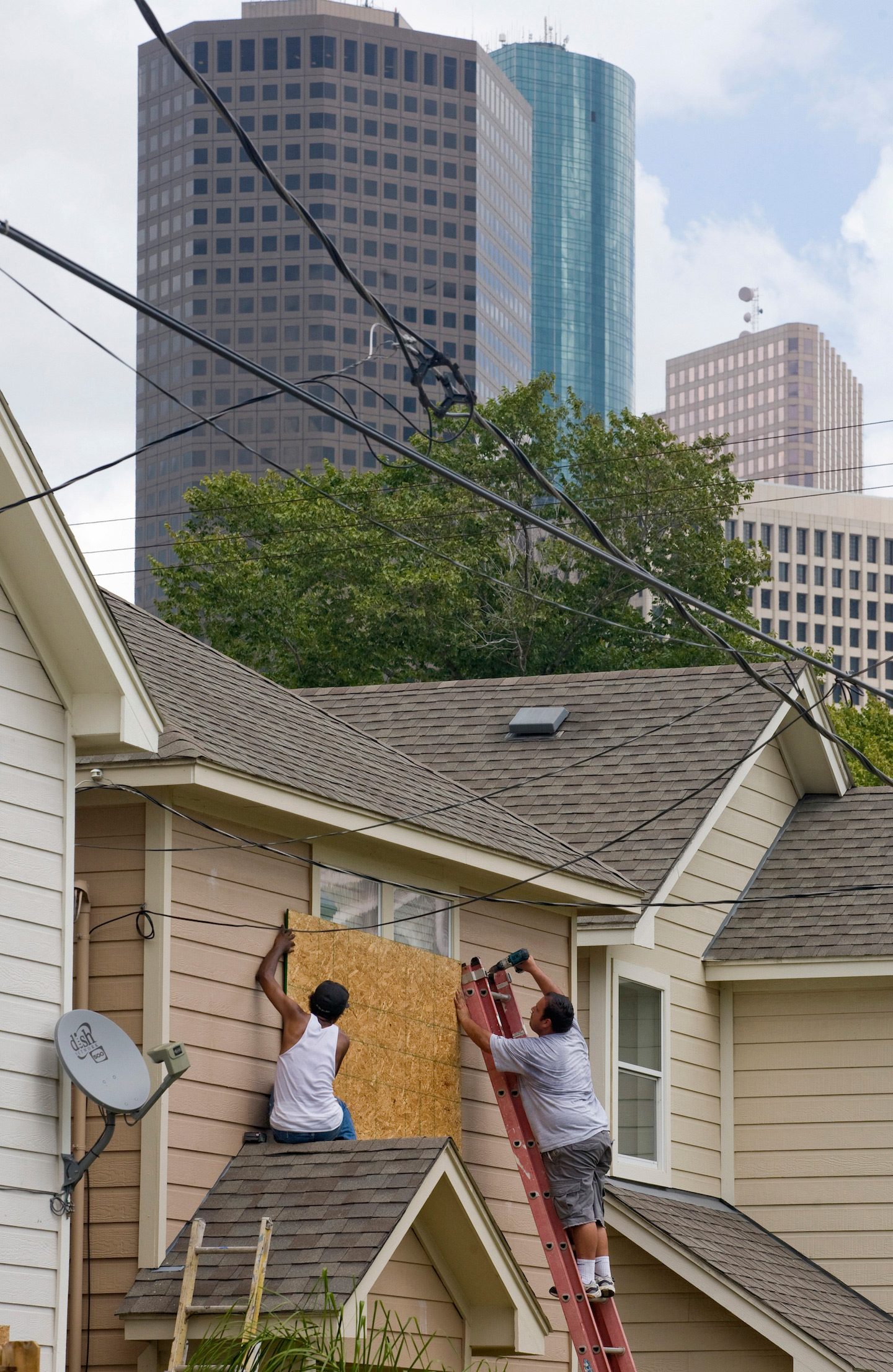 From “Lockwood” on, as we follow the narrator and his family, each story tracks their slow exodus from the neighborhood for one reason or another. His father leaves because of infidelity, his brother to fight in a pointless war, his sister when she marries a man with more money. When it’s finally down to just the narrator and his mother, developers who want to buy up their land in order to gentrify the neighborhood come knocking, too. Most of the people around the narrator are looking for—and finding—reasons and ways to leave. He’s looking for ways to stay.

In “Navigation,” a story about the narrator’s relationship with a white man who needs help learning Spanish, the narrator expresses this clearly: “He asked if I’d thought about abandoning Houston, and I said if I had I’d have done it by now.” Even when he’s bouncing from restaurant job to restaurant job, straining to fill his time and make ends meet, his commitment to the city seems to grow out of a sense that, despite his hardships, he has something that others don’t. This is demonstrated in a conversation between the narrator and Roberto in “Lockwood”:

Once, I asked Roberto if he liked it in Texas. He looked at me forever. Called it another place with a name. Could be worse, I said. You could be back home. Home’s wherever you are at the time, said Roberto. You’re just talking. That doesn’t mean anything. It would, he said, if you knew you didn’t have one.

The narrator knows that he has a home, and he knows what it means to lose it. Despite Houston’s faults, and the difficulty that he has in living there, he retains the lingering memory of the toll that Roberto’s own frequent moves took on him. Even as others around the narrator leave the city, he is generally unwilling to consider the prospect, so put off by the thought of changing his home that he shuts down discussion of it altogether. Houston is the only place he’s ever known, and it’s the only place his family has ever been whole. The unstated idea that floats throughout the book is that he still longs for the unit his family was at the beginning of the book. It is not possible, really, for his family to reassemble, but leaving Houston feels, to the narrator, like the final nail in the coffin.

Still, in Lot, Washington never underestimates the forces that are pushing these people away. Alongside the economic forces, there are the climatological ones. In “Bayou,” a story about a pair of friends who find what they believe to be a chupacabra, one of them describes the weather like this: “It was also hot as shit. Typical Houston.” Washington doesn’t belabor the point, but he is clear on how the oppressive heat affects people’s lives. In “610 North, 610 West,” the narrator reflects on how the summer’s rising temperatures impact the family’s business:

Whenever summer hit, Ma kept us in the restaurant. We lived on the building’s second floor and ran the business below. But whenever June hit, her usual staff begged off, blaming the lack of AC and ice water on hand, so Houston’s sun had them out drinking 40s on Navigation, which left [my brother] and me sweeping, killing roaches, stomping the tile lining the doorway.

Washington captures the routinized nature of this and how the effects of the weather cascade. The extremity of Houston’s heat shapes the everyday lives of its population in countless ways. What Washington highlights is that the difficulty in finding refuge is a constant source of frustration and hardship for those who are already toiling.

The high temperatures are not the only perilous features of Houston’s climate. Washington also weaves in anecdotes about Hurricane Harvey and its aftermath. The references almost always take the form of a memory or an offhand comment. In “Peggy Park,” a story about a group of men who play baseball together, there’s an affectionate retelling of their attempt to reclaim normalcy after the storm:

There was one night, just after Harvey, and the streets were all the way flooded, and you couldn’t run the bases for shit, let alone wade through the dirt, but, even still, we all knew our steps, it felt primal, like birth, like this shit we just knew how to do, and our toes grazed the asphalt and our legs took us through it, and that night Micah rounded the bases like a dog before he finally got his ankle stuck in a pothole by the fence.

Washington uses the medium of the short-story collection to excellent effect. His vignettes give readers a multifaceted picture of a city in flux, and in Lot, he demonstrates both the ways that the city has grown more difficult for vulnerable residents over time and the consequences of that difficulty. Whereas the language around gentrification and real-estate speculation often manifests itself as abstraction, especially concerning the people it harms, Washington is crystal clear about what is at stake for lifelong residents and their communities. He’s writing in honor of those who are still struggling to make their lives work in Houston, and about the danger of the city becoming just another place with a name.