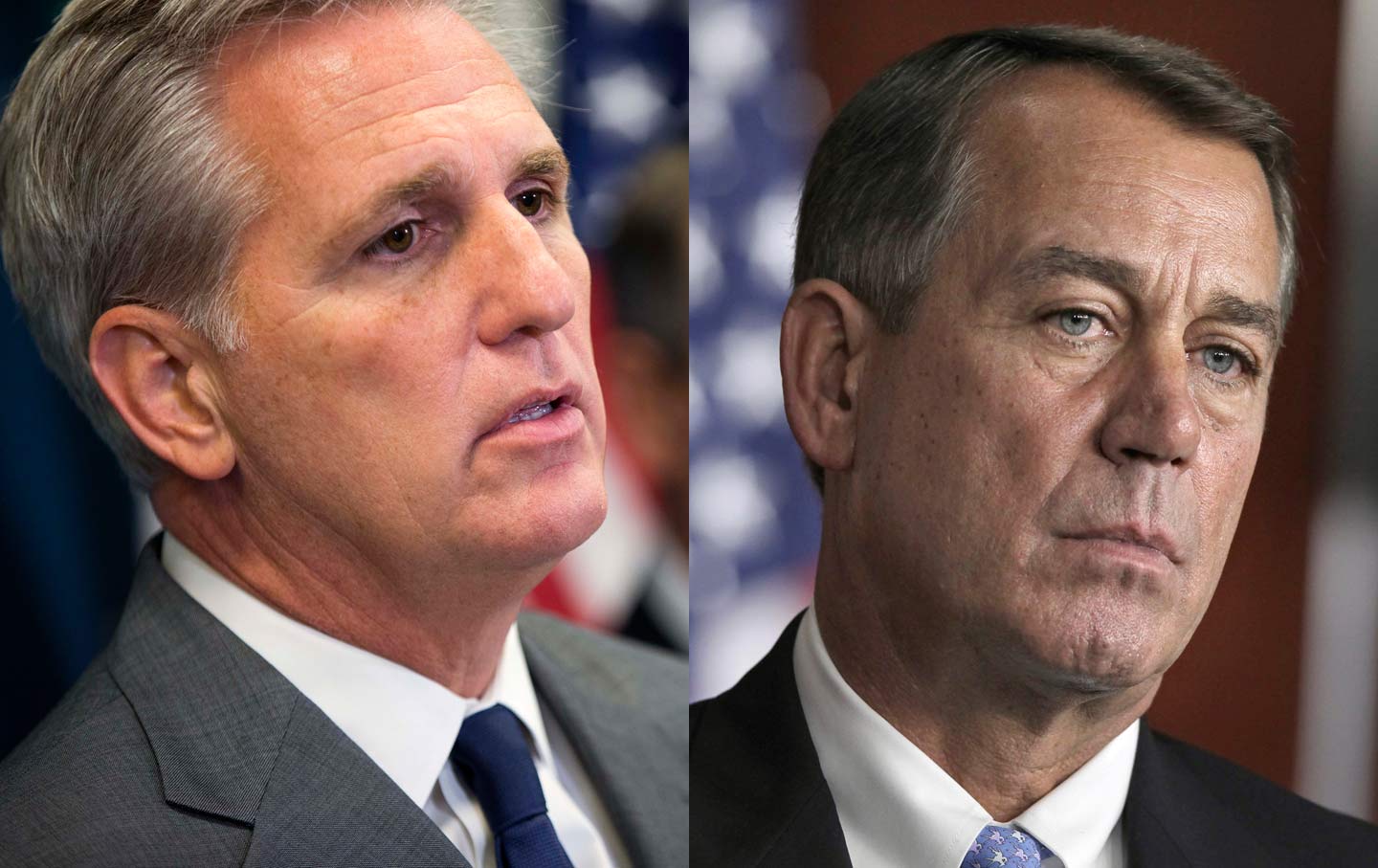 The chaotic House GOP leadership battle—if it can be called a battle, when virtually no one wants to be leader—is normally blamed on fractious right-wing extremists in the so-called “Freedom Caucus.” But when House Speaker John Boehner and his would-have-been successor Kevin McCarthy wonder who’s to blame for their troubles, they should start by looking in the mirror.

Since Boehner came to power in 2011, his leadership team has encouraged the far right in its crusade against government, governing, and compromise. They’ve fostered the extremists’ delusions that they can do things they simply can’t, with a Democrat in the White House—repeal Obamacare, defund Planned Parenthood, hold the debt ceiling hostage to force huge budget cuts.

Boehner and McCarthy (and before him Eric Cantor, who was defeated by a far-right primary challenger last year) can do the math: time and again they turned to Democrats to pass measures to keep the government open and avoid disaster, but only after they tried and failed to mollify the far right. This only encouraged the “Freedom Caucus” members in their delusions of power—and enraged them that they were being kept from wielding it.

There’s a further irony in the fact that, back in 2010, McCarthy and Cantor (along with House Budget Committee Chair and 2012 vice-presidential nominee Paul Ryan) recruited a lot of the folks tormenting them now. A photo of the three “Young Guns” made the rounds on Twitter on Thursday, with the young men dressed in pleated slacks that looked like hand-me-downs from Dad. Now two of the Young Guns have been defeated, and the third, Ryan, is being begged to step in as Speaker and save the party.

Ryan doesn’t want the job either—though as I write, there’s reporting that he may bow to pressure from Boehner, McCarthy, and others and take the job. But what happens then? The minute he does that, the guns of the right, young and old, will be aimed at him. Ryan, the man behind the cruel Ryan budget that would slash programs for the poor and voucherize Medicare; who wants an abortion ban with no rape exception, won’t be far-right enough for the crazies—at least once he stepped in as Speaker. By definition, if he does it, he’s doing the establishment’s bidding. He’ll be tainted by reports of the two Boehner phone calls to lure him; by McCarthy himself saying Ryan should do it; by the whole roster of Republicans who said he’d save the party.

The Republican base doesn’t want to save the party. They want to burn it down.

Of course McCarthy has now made everything worse, not better, by insisting (as he stepped down) that he didn’t want to win with 218 votes, a bare majority of the House; the new Speaker, he said, should unite the entire Republican caucus of 247. “We need somebody to get us 247,” McCarthy told Politico. “And I was never going to be able to get 247.”

That’s preposterous. It’s just one more example of party leaders encouraging delusional thinking. There’s no way the folks who hate compromise are going to unite with moderates behind a Speaker who can govern. Just getting to 218 will be a struggle (McCarthy wasn’t sure he had the votes); declaring the need for a consensus candidate only cedes more ground to the right.

Moderates like Representative Charlie Dent have suggested the House look for a “bipartisan” coalition to elect a Speaker. That’s probably delusional too, in this climate. Conceivably, though, the same coalition that’s come together time and again to avert disaster could elect a Speaker. It could also move on a few key issues, from comprehensive immigration reform to the highway-funding bill to perhaps other infrastructure fixes.

John Boehner, too, could have done all of that. If Boehner had turned to Democrats to do more than just avert disaster, he probably could have gotten the votes for the Senate’s immigration bill, and other measures, too. He also would have shown the 40 or so members of the “Freedom Caucus” that they didn’t have the power, on their own, to block all legislative progress. Maybe a few of them would have learned from the experience. And maybe he would still be Speaker—or McCarthy would have taken the gavel, with his blessing.

Now Boehner’s stuck being Speaker until his party settles on a new one. With the new impossible goal—it’s sheer fantasy—of getting 247 GOP votes for a successor, Boehner could be waiting a long time. I’d feel sorry for him—he seemed so relieved to be stepping down last month—except he made a lot of this mess for himself.