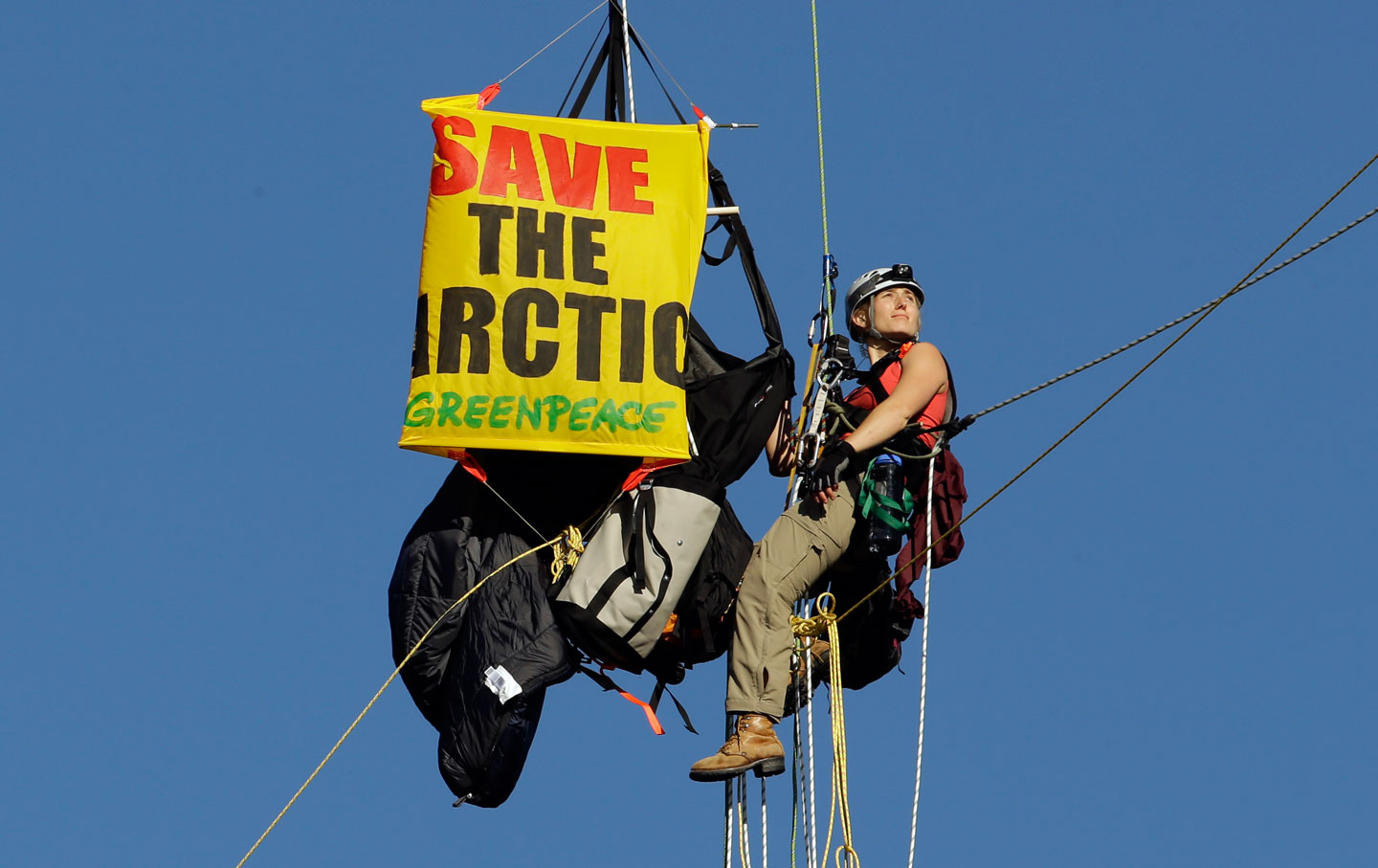 An activist hangs from the St. Johns bridge in Portland, Oregon as part of a protest to block the Royal Dutch Shell PLC icebreaker Fennica from leaving for Alaska. (AP Photo/Don Ryan)

PORTLAND—Just after sunrise yesterday, the Fennica made a break for it. An icebreaker and supply vessel leased by Royal Dutch Shell for Arctic oil drilling, the Fennica had limped to Portland, Oregon, days earlier for repairs after being damaged near the Aleutian Islands. It was sailing down the Willamette River, along an industrial stretch of Northeast Portland, toward the open seas when the Coast Guard turned it around before it could pass under St. Johns Bridge.

Twenty-six hours earlier, thirteen activists with Greenpeace USA rappelled off the steel suspension bridge that sits 205 feet above the river to block the ship’s passage. Shell’s exploratory drilling in the Arctic’s Chukchi Sea is limited without the Fennica, which carries critical equipment and is designed to push ice floes out of the way of Shell’s rigs. But at this moment it could not get by the Greenpeace activists trailing red and yellow banners as they dangled like spiders from their lines in the dawn light.

Nicholas Caleb, 31, a Portland activist with the Climate Action Coalition, watched from the shore as the Fennica inched toward the bridge, flanked by a handful of Coast Guard vessels. Dozens of kayaks, canoes, and small motorboats launched from shore to make passage even more difficult. “There was elation when we realized the ship was turning around,” Caleb says. “Everyone started celebrating.”

The victory energized many in “Blockadia,” referring to the people-powered resistance gumming up the transport of oil, gas, and coal through the Pacific Northwest. The celebration spread to social media with photos and videos of the action, talk of history, and praise for the heroism of the bridge sitters.

The activists had upped the stakes from an action on July 25, when more than a hundred “kayaktivists” took to the water in a symbolic blockade of the Fennica as it sat in drydock. And they followed on the sterns of kayakers who tried to prevent a Shell drilling rig from leaving Puget Sound in June.

But in forcing the Fennica to turn around, Greenpeace changed the game. By noon, people were streaming in to join the hundreds gathered in Cathedral Park, which sits beneath St. John’s Bridge. It was an inchoate occupation with sites for food, social media, and trainings. Scores of people watched from land, yelling support to those on the water and in the air. On the bridge, police halted pedestrian traffic, but some support teams lingered with gallon water jugs to resupply the bridge sitters on a day that saw record temperatures of up to 106 degrees in the region.

On the shoreline, a few dozen people gathered in two circles. One group, ranging from college students to retirees, listened to Bill Moyer, co-founder and executive director of the activist group the Backbone Campaign, describe how to use the kayaks to block the Coast Guard vessels. The other group was a rescue team learning how to retrieve anyone who capsized.

This is “moral warfare,” Moyer said. “Greenpeace’s tactic requires surprise, ours requires mobilization,” he added, referring to the bridge sitters and kayakers, respectively. The group hoped to get enough people in the water to create a “conundrum for the Coast Guard by making it too difficult for them to deal with so many protesters safely.”

Meanwhile, on the same day, a federal judge in Alaska found Greenpeace in contempt of court for violating a previous injunction aimed at stopping the activist organization from interfering with Shell Oil vessels. Greenpeace had decided to continue with the bridge occupation despite the judge imposing fines of $2,500 an hour, which would rise to nearly a quarter-million dollars a day by the weekend if the blockade continued. But the judge apparently accepted Shell Oil’s argument that it was not enough for Greenpeace to pay a fine equal to the company’s cost of leasing the Fennica for $60,000 a day—the screws needed to be turned further because Greenpeace would use the blockade as a fundraiser.

Carl Wassile, 40, of the Yup’ik Nation says he came down from Southwest Alaska where he’s been fighting Shell Oil for 10 years. He got involved after meeting Ken Wiwa, Jr., whose father, Ken Saro-Wiwa, led a peaceful campaign against crude oil extraction in Nigeria. Saro-Wiwa was executed by the Nigerian government in 1995, many believe with the complicity of Shell. Wassile invited me aboard an inflatable motorboat where he and Caleb tried to communicate with police, keep track of arrestees, and coordinate the growing flotilla of kayaktivists.

On board was Ary LaValle, 31, wearing an Iraq Veterans Against the War t-shirt. He had served as a paratrooper with the 82nd Airborne in Tal Afar, Iraq in 2006. When asked if his military service was connected to his current activism, LaValle said, “Ten years ago I was fighting for empire. I was part of the wars for oil and gas. Now I’m fighting against empire.”

Wassile eased the boat out and roared into the main channel. More than a dozen police boats—cutters, patrol vessels, jet skis —from two county sheriffs, the state police, and the Coast Guard were moving down river. It was a game of shark and fish as the police would yell at the protesters as their boats surged within a few feet of kayakers who would then scoot away. Chants of “Whose river? Our river!” competed with police commands on loudspeakers.

Around 3 pm, police cleared the bridge walkway of the support teams and prepared to remove enough bridge sitters to allow the Fennica to pass. (Greenpeace later confirmed three support members were briefly detained and given citations.) By this time the bridge sitters had lowered themselves off their platforms to complicate efforts to capture them. A rotor drone of unknown origin crossed the river, flying under the bridge sitters and over the kayakers.

Soon after, an anchor-like tool was lowered from the bridge and hooked a rope connecting two bridge sitters. All the sitters were roped together to prevent them from being plucked off one at a time. At the same time, a first responder started rappelling down. But the anchor snapped the line between the activists, who hung in place, and the officer retreated.

One kayaker cried out, “Greenpeace, we love you!” The police grew more aggressive, announcing the river was closed to all traffic, nabbing more boats and detaining activists. The policy was apparently just catch and release, as one activist kayaked by barely an hour after he was nabbed. With so many boats at their disposal and the paddlers losing steam, the police eventually penned the scores of kayaks near the east bank.

All of this was a warm-up for the main event. Around 5 pm the Fennica set sail again. Three bridge sitters were cut down by the Portland Fire Department and lowered to boats below where they were detained. Meanwhile, another activist locked himself by the neck to a second bridge that needed to be raised to allow the Fennica to pass, but police removed him soon after.

The Fennica finally had a gap to slip through, but kayaktivists made one attempt to block the ship. The police armada kept most at bay, but some kayakers jumped in the water, forcing emergency personnel to pull them out, slowing the ship yet again.

After all that, it took barely an hour for the Fennica to pass the bridge. The remaining bridge sitters escaped without being detained. All in all, some 25 kayakers were held by police. “At least 11 were taken by the Coast Guard and issued $500 citations,” according to Daphne Wysham, director of the Sustainable Energy and Economy Network. The police, at times, were reckless. Video shows one sheriff’s boat ramming and capsizing a kayaker. “One law enforcement boat ran over a kayaker who was forced between the Fennica and the police boat,” said Wysham.

Activists and supporters alike said they felt they made history by stopping the “ship of doom,” even for a few hours. Others said they were deflated knowing there was nothing left to stop the Fennica from reaching the Arctic. Despite the government’s finding of “no significant impact” for Shell’s proposed exploratory drilling, it also admitted there is a “75% chance of one or more large spills” over its exploration and production lifetime. The Obama administration’s approval of drilling in one of the most environmentally fragile, distinct and treacherous areas of the planet also comes less than three years after a Shell drilling rig ran aground in the Gulf of Alaska.

But Blockadia won’t be built in a day or with one protest. The actions against Shell Oil have raised the cost of Arctic drilling, which is the only language the energy industry understands. It will take more people, more creativity, more organization, and more commitment to bring it to a halt. For one day, at least, activists showed it is possible to stop the nightmare of climate change before it’s too late.