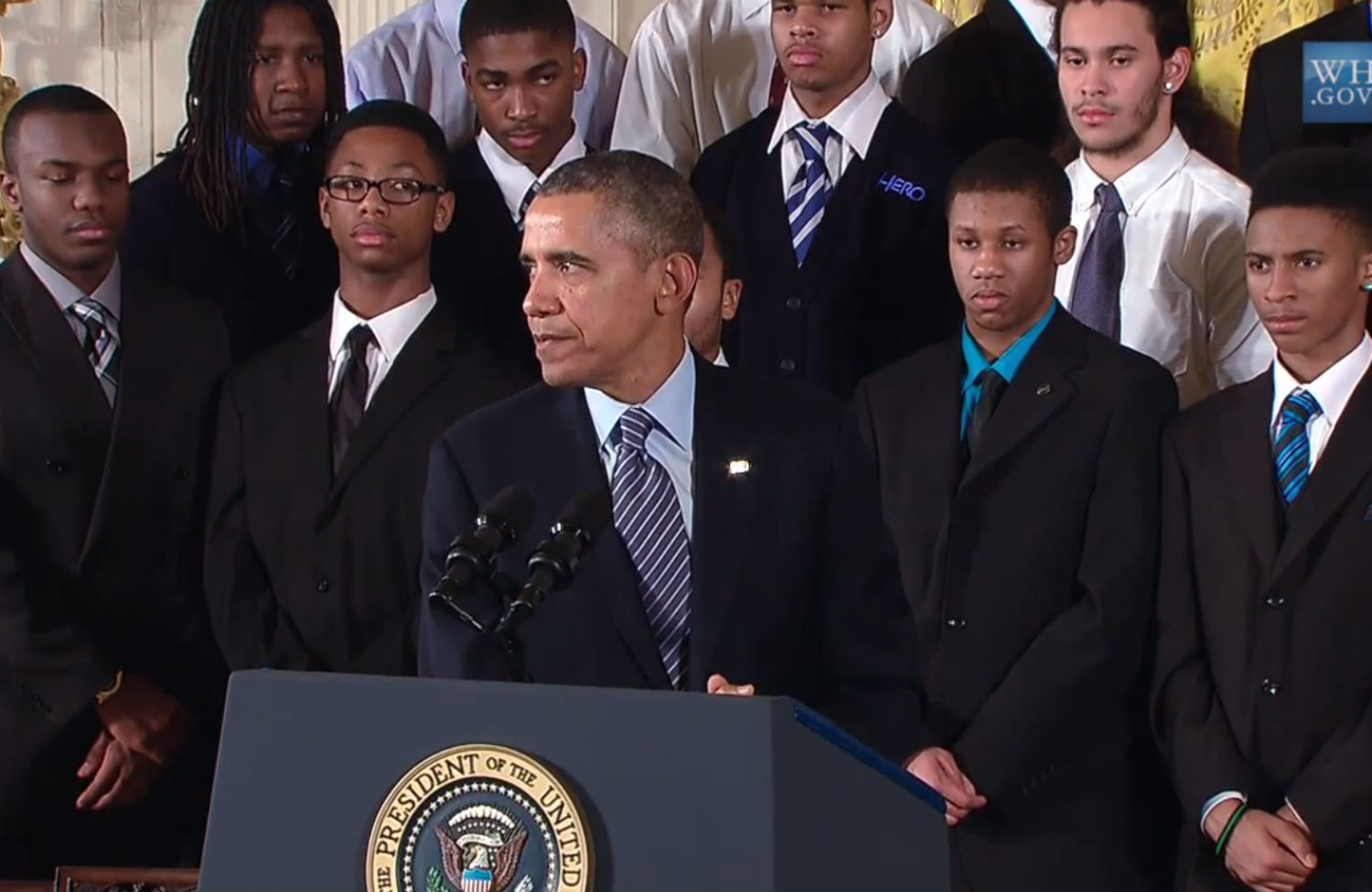 Last Friday, five black men who organized a sign-on letter drawing attention to the shortcomings of President Obama’s initiative for black men and boys, My Brother’s Keeper, held a conference call to make their motivations plain and field questions about their effort. The call drew 300 people, according to organizers. Their letter—which has attracted more than 200 signatures from other black men—draws attention to the folly of excluding girls and women of color from the most visible national racial justice initiative going. It also faults the project for privileging personal responsibility and “up-by-your-bootstraps” rhetoric over holding accountable the institutions that fail black and brown communities, from schools to the criminal justice system to the job market.

On the call, author and Vassar College Professor Kiese Laymon began by acknowledging the black women who raised him—including his mother, grandmother, aunt and godmother—and the various economic and social barriers that they faced and he witnessed. He then spoke to the broader cultural conditions that would allow for a program with a singular focus on boys and men of color to develop in the first place, despite clear evidence that girls and women struggle alongside their male counterparts, citing “this erroneous perception that black girls and black women will persist no matter what.”

“We have been conditioned from music, from literature, from the pulpit of the White House [to believe] that black girls are going to be OK,” Laymon said. “Black women, like black men, scar.”

Georgetown Law Professor Paul Butler pointed to the impact the funding behind the White House initiative—$200 million from the philanthropic community—will have on community-based and nonprofit organizations that depend on private funding to operate.

“In order to get money, we’ve got to talk about boys and we cannot talk about girls,” Butler said, anticipating the response from such organizations. “If the money is going to boys, that’s where the programs will go as well.”

One highlight of the call—which took place just a few days before Father’s Day—came in the form of a question from one of its participants, who asked whether this group wasn’t really just a front for a black feminist. Which black feminist in particular was left to the imagination, but the caller raised a legitimate question about the letter, which was signed by the likes of academics and activists, sure, but also men with less lofty titles and more diverse backgrounds. (Critics have suggested that the letter is out of touch with reality because of some signers’ ties to the ivory tower.)

That question is: Where are the women’s voices on this issue? Surely women can and should raise these questions for themselves if they feel that My Brother’s Keeper is missing something critical. The answer came Monday in the form of a second letter, this one signed more than 1,000 women of color and facilitated, as was the first, by the African American Policy Forum. Signers include Mary Frances Berry, former chair of the US Commission on Civil Rights; Angela Davis, Anita Hill; Rosario Dawson; and Rosie Perez. It makes many of the points that are often cited in the growing conversation on this topic, and it offers a new angle on how the My Brother’s Keeper falls short. In failing to collect data on girls of color, the initiative perpetuates the problem of not knowing the extent of the challenges facing girls and therefore being able to claim ignorance and turn a blind eye. According to this most recent letter:

Our daughters are ignored and under-researched. Although the exclusion of girls has been justified as data-driven, the fact is that little data is gathered on them. This situation creates a vicious cycle in which the assumptions that girls are not in crisis leads to research and policy interventions that overlook them, thus reinforcing their exclusion from efforts like MBK to bring successful programs to scale. MBK is not only built on this foundation, but extends it further by failing to require the inter-agency task force to report data that address the wellbeing of girls of color as well as boys. This erasure simply adds to the crisis that girls of color face, forcing them to suffer in relative silence.

What remains to be seen is what impact the letters are having. Laymon told me via e-mail that the group that coordinated the men’s letter has been in communication with the White House about a possible meeting, though that conversation has stalled pending the White House’s ability to connect the organizers with officials central to the initiative. For now, the president and the philanthropic community appear to be staying the course with My Brother’s Keeper—while the list of people pushing for it to broaden its mandate keeps growing.