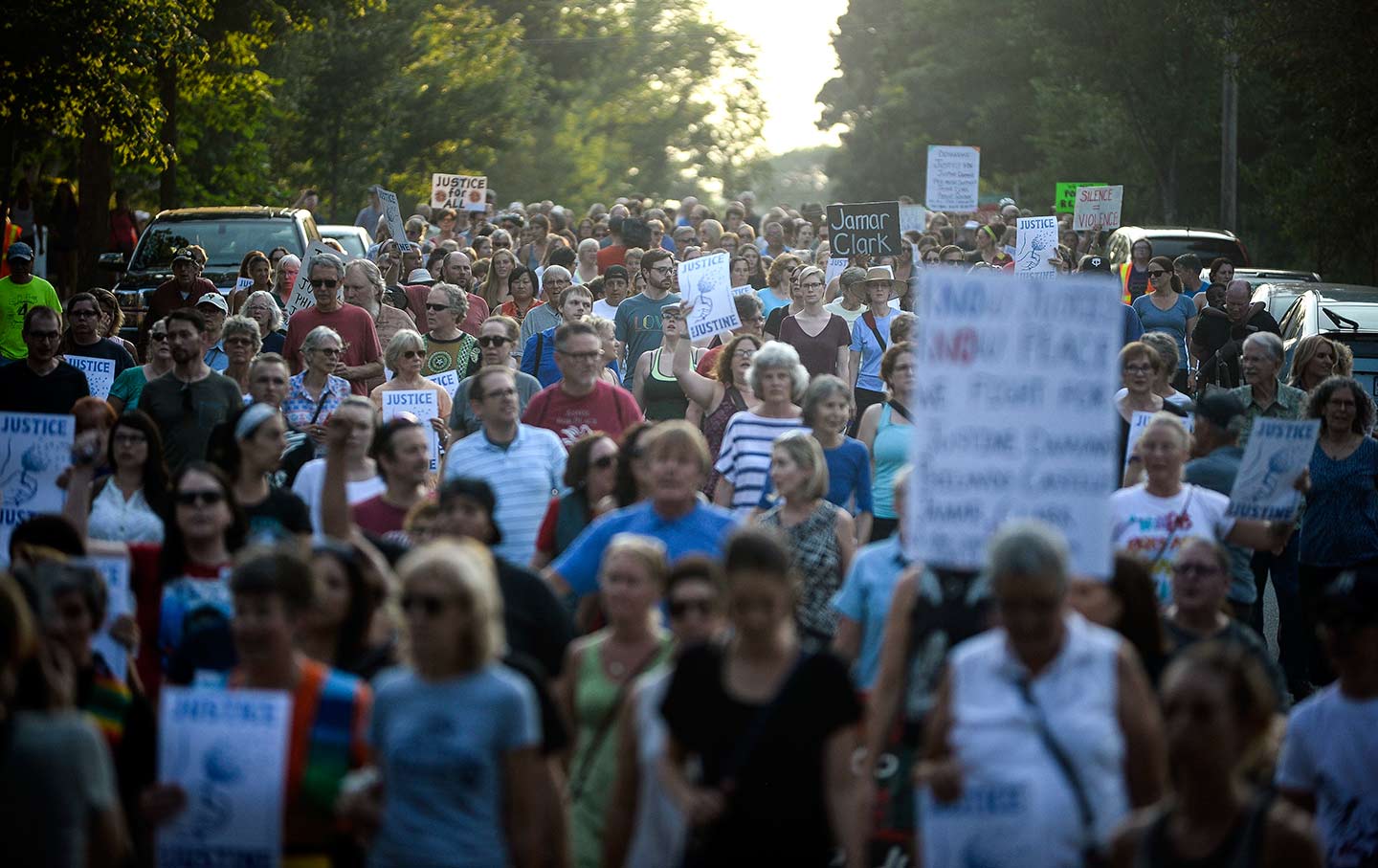 Hundreds march from the site of Justine Damond’s shooting in Minneapolis on July 20, 2017. (Aaron Lavinsky / Star Tribune via AP)

Last week, Justine Damond, a 40-year-old woman, was tragically shot and killed by a police officer in Minneapolis. Damond had called 911 twice to report a possible sexual assault of another woman in an alley. When the police showed up, Damond approached the squad car and was shot once in the abdomen by one of the two responding officers. She was given CPR but could not be revived and died on the scene minutes later.

In the days since Damond’s death, which has been ruled a homicide, a miraculous thing has happened—media and police alike have humanized her. There was also, remarkably, near-instant police accountability. Minneapolis Police Chief Janeé Harteau was forced to step down when the city’s mayor, Betsy Hodges, said she lost confidence in Harteau’s ability to do her job after it was revealed that the officer who shot Damond was not wearing his body camera.

Justine Damond, of course, is not the first person to be shot by police. She joins an ever-growing list of such victims.

After visiting the southwest-Minneapolis neighborhood where Damond lived, Hodges said she was “heartsick” and “deeply disturbed” by Damond’s death. In a blog post, the mayor wrote that “the fatal shooting of Justine Damond should not have happened.” The lawyer for Damond’s family, who also represented the family of Philando Castile, a local black man shot and killed by police in front of his girlfriend last year, called Damond “the most innocent victim” of a police shooting he’s ever seen. “I’m not saying Philando wasn’t innocent, too,” he told the Minnesota Star Tribune. “But here is someone who called the police and was trying to stop someone from being hurt…and ends up being shot in her pajamas.”

Justine Damond, of course, is not the first person to be shot by police. She joins an ever-growing list of such victims. But what makes her case practically unique is that in the court of public opinion she is being given posthumously the benefit of the doubt—something all victims deserve. In nearly every article about her death, a beautiful photo of Damond, originally from Australia, sits atop the text. In it, she fingers her perfectly coiffed blond hair, exposing a giant diamond engagement ring. Her face looks bright, kind, and loving. Even her eyes smile. Her toothy grin warms the heart. 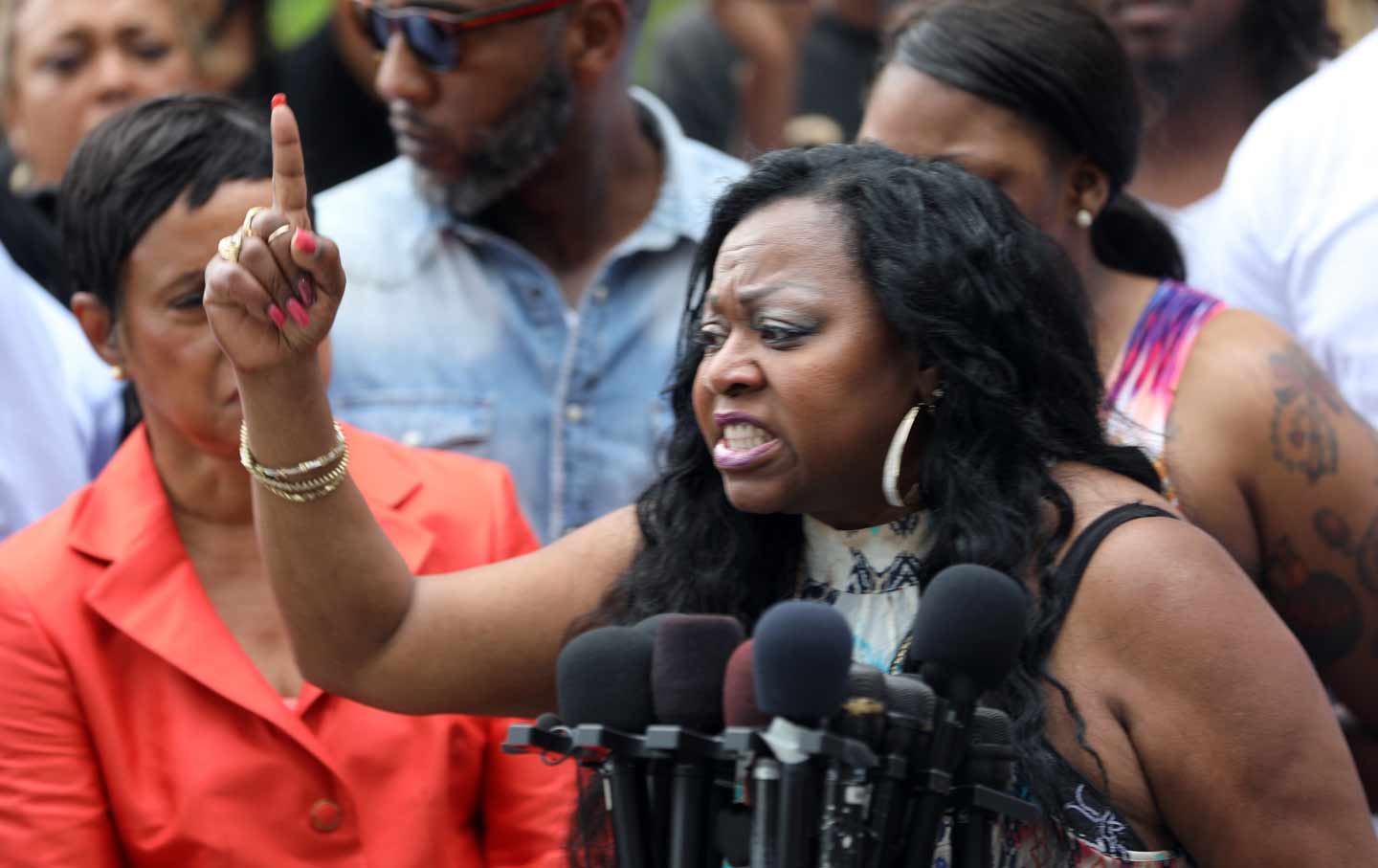 The Police Officer Who Killed Philando Castile Is Found Not Guilty

We haven’t yet learned of Damond’s mistakes in life or been shown an unflattering photo of her. We don’t know about her expressions of anger or anxiety, grief, or sadness. There has been no condemnation of her appearance or attitude as threatening, as there was with Sandra Bland, Eric Garner, and Tamir Rice. Instead, most of the articles written about her death highlight her achievements: a yoga teacher, a soon-to-be wife, a motivational speaker, a caring individual. Her father described her as “a beacon to all of us.” The New York Times described her upcoming wedding, “Barefoot, on a beach in Kona, Hawaii, exchanging vows under a wooden arch trellised with Tibetan prayer flags onto which their guests would add prayers of their own: That was the plan. The wedding was set for Aug. 17.”

Mohamed Noor, who shot and killed Damond, the department’s first Somali officer, hasn’t spoken to the press or investigators, so it’s too early to know what his defense will be. But his accompanying officer, Matthew Harrity, did tell an investigator that the two officers were startled by a loud sound before Noor fired. So far, one right-wing outlet has focused on Noor as a Somali immigrant, and another, Breitbart, has scaled back the pro–law enforcement angle that typically frames their coverage of police shootings when the victims are black men.

Damond was white, but her death has not been ignored by activists who have protested the deaths of unarmed black men. In fact, a group of protesters, led by a good friend of Philando Castile, walked into a press conference held by the mayor and called on her to resign. It was not a black man shot this time, but the same protesters, who have experienced the same pain and anguish in their communities, rallied around Damond.

Damond was white, but her death has not been ignored by activists who have protested the deaths of unarmed black men.

Police shootings of unarmed civilians impact people of color disproportionately, a result of historic perceptions of black men as brute and animalistic and black women as lascivious and angry. The reaction to Damond’s death—by her lawyer, by the media, and the city—shows that the deaths of white women, too, are tangled up in American racism: in the assumption that white women are more valuable.

A New York Times headline about the shooting read “In Minneapolis, Unusual Police Killing Raises an Old Outcry: Why?” The answer remains unclear, but there is a lot more being done to get to the bottom of that “old question” than in other cases. That’s a good thing. Departments everywhere should give every shooting victim the same benefit of the doubt that Minneapolis is giving to Damond. It is only then that excessive force will be dealt with.