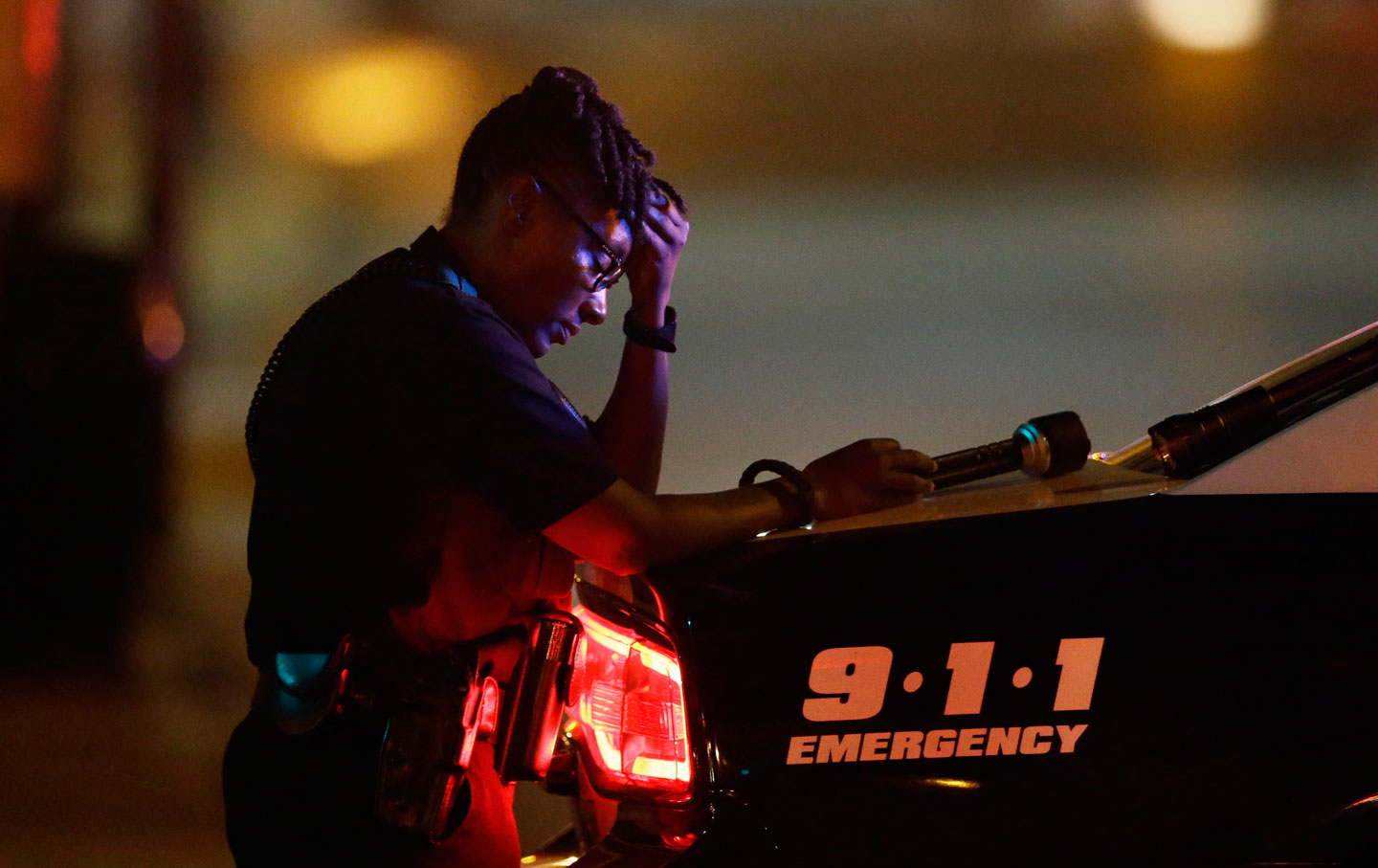 A Dallas police officer, who did not want to be identified, takes a moment as she guards an intersection in the early morning of Friday, July 8, 2016. (AP Photo / LM Otero)

Let’s start here: Six more people are dead today, adding to the carnage of yet another week of wrenching American violence. The five police officers among them were shot down while doing their jobs as public servants, and that fact must be stated plainly and roundly decried. As President Obama succinctly put it, “There’s no possible justification for these kinds of attacks.”

Why Alton Sterling and Philando Castile Are Dead

There’s also no reason to connect the attacks to the hundreds of people who joined the anti-violence march in Dallas, or in cities around the country this week. The Next Generation Action Network, which organized the march, has already condemned the shootings and called them “cowardly.” “I was right there when the shooting happened,” Dominique Alexander, the minister who leads the organization, told The New York Times. “They could have shot me.” The group will hold a press conference at 11 am Central time outside Dallas’s City Hall.

We don’t yet know who killed these five officers or why they did it. It was nonetheless a plainly coordinated and planned attack, seemingly targeting public officials. And that fact makes it an attack on the public, too. Police officers work for us, they are our representatives—which is precisely why police violence against black people is uniquely corrosive and must also be roundly decried, even still today.

Nothing about the horrific events in Dallas last night changes the reality that brought hundreds of people out to march in the first place, any more than the assassination of NYPD Officers Rafael Ramos and Wenjian Liu in 2014 changed the fact that Eric Garner’s killing was a crime against humanity. It is still sadly necessary to remind the nation and our law enforcement that black lives matter. It’s a despicable fact that the death toll in the Dallas attack appears to mark the second-largest loss of police life since 9/11. It is nonetheless still a despicable fact that police have killed 566 people in 2016 alone, according to The Guardian’s ongoing tally. It is nonetheless still a despicable fact that police unions, in particular, have worked mightily to stand in the way of transparency and accountability for those deaths.

Here’s the thing: The world is often more complicated than our political discourse accommodates. We are rarely allowed to use the word and in our politics, but it is surely useful this morning. We can and must condemn and organize against violence in all its forms—both violence against public servants and violence that public servants direct at us; acts of terrorism and state-sanctioned acts of war; hate crimes directed at a community of people and personal disputes that turn deadly due to the omnipresence of guns. What unifies all of this death is the grim reality that America is a horribly violent place. And if Dallas changes anything about the movement for black lives, it is only to remind us that in order to truly ensure black lives are valued, we will have to confront the broader culture of violence that has long gripped this nation.