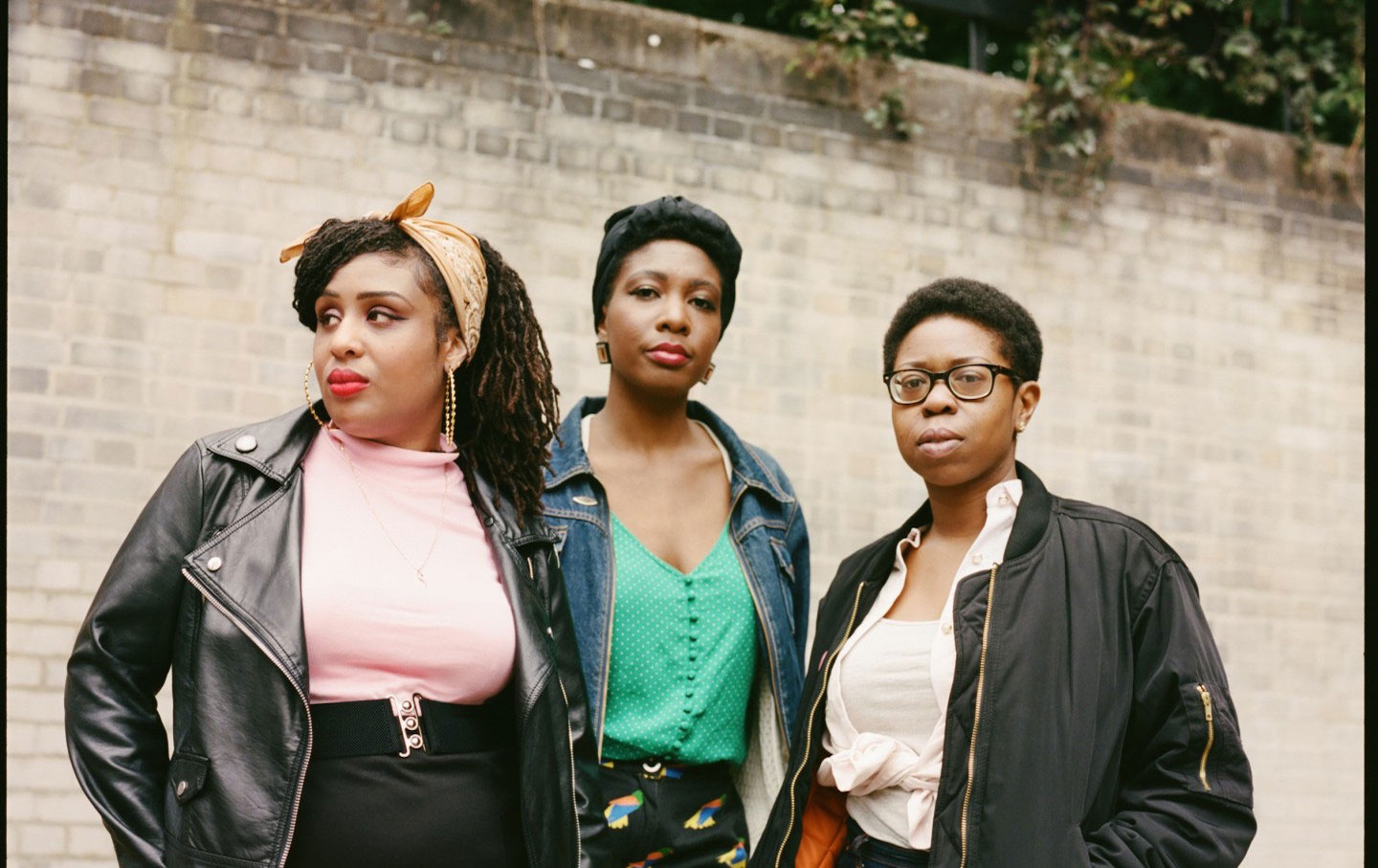 The tenets of sisterhood are timeless and sacred, as nourishing and binding as they are impossible to pin down. Sisterhood is governed by love, committed to self-preservation, and holds up friendship and mutual support above all other communal wants and goals. On its debut full-length album Sistahs, punk band Big Joanie present sisterhood as a microcosm of black feminist liberation. Pairing DIY aesthetics—worn-in cassette-tape hiss and other audio imperfections—with playful instrumental flourishes, the album is as much a declaration of the band’s political vision as it is a refusal to be defined.

Formed in 2013 in London’s DIY punk scene, Big Joanie have since the beginning been explicitly and intentionally a black feminist band. The group came together after lead singer and guitarist Stephanie Phillips, frustrated with the homogeneity of the city’s punk community, posted on Facebook asking for other black folks to join her in a new band. Activist Chardine Taylor-Stone signed on as Big Joanie’s drummer, wielding a pared-down, two-piece drum set. In 2017, current bassist Estella Adeyeri joined the band, replacing founding member Kiera Coward-Deyell. In a statement for their debut EP, 2014’s Sistah Punk, they declared the band’s purpose: “By making black punks more visible we believe we can inspire more young black punks to start the bands they always wanted to hear.”

The past four years of Big Joanie’s work include explicit nods to its musical foremothers, including a cover of “Doe” by the Breeders and a defiant reworking of TLC’s 1999 megahit “No Scrubs,” alongside a smattering of original, hardcore-flecked tracks that center on what it feels like to be an outsider. While punk music has always explored this theme, Big Joanie don’t let the genre itself off the hook. Their new album, Sistahs, retains the band’s lo-fi scrappiness and grit, but goes even further through their heritage of previous musical sisterhoods. At various times on the brisk album, the trio recall the dancy urgency of Le Tigre, the pop sensibility of Shonen Knife, the sneering fierceness of Sleater-Kinney in the ’90s. They’re not bound to any one tradition, nor should they be.

Black women’s roots in punk run deep, from pioneers whose names live on—like X-Ray Spex frontwoman Poly Styrene and ska and two-tone artist Pauline Black—to those whose names have since faded. And for just as long, black women have had to assert their existence within the music. “You think that I’m not here, though I’ve been here for years,” Phillips sings on the album’s dreamy closer, “Cut Your Hair.” The line taps into a frustration shared by many minorities working in white-washed or male-dominated spaces. On Sistahs, it’s as if Big Joanie are holding that lineage of feminist punks in their arms. They’re creating from a world where their ideology is the default—not fighting for acknowledgement, but inviting the listener into a space all their own.

The lyrical swipes on the album clue listeners in to Big Joanie’s ethos. “Token” pokes fun at “colorblind” people who are unwittingly racist. “All of my friends are white, all of my friends…but you, you’re different,” Phillips sings in her smooth mezzo before the background vocals respond: “Don’t think it really matters anyway,” in a tone that evokes the vapidity of the statement. Meanwhile, “It’s You” twists the classic, conflict-avoidant, people-pleasing breakup line “It’s not you, it’s me” into a sneering statement of sexual dissatisfaction. It’s telling that alongside those tracks critiquing casual racism or a boring sexual partner is “Used to Be Friends,” a poppy anthem about a most unforgivable violation of sisterhood: betrayal. “Remember when we used to be friends?” Phillips ruminates in the verses. The catchy chorus—“I’d like to be friends with you, but I only feel hatred”—is simultaneously vulnerable and unforgiving. The song as a whole is a funny yet incisive take on the mental real estate that a broken friendship can annex against your will. In devoting album space traditionally reserved for songs about romantic breakups to one about a soured friendship, Big Joanie reassert that sisterhoods are of paramount concern.

As serious as sisterhood can be, however, the album boasts an element of fun and camp throughout. Handclaps, a recorder, and underwater bass effects all make appearances to underline the ultimately buoyant message. And while Big Joanie are unafraid to explore the lows of life that all young adults must experience, nowhere do they trip from clear-eyed examination into self-pity. Throughout Sistahs, Taylor-Stone’s bass drum provides a defiant heartbeat that enhances these explorations of self-affirmation. The worldview that emerges is a decidedly thriving and fun-loving one. The album’s production is as warm and fuzzy as the album’s cover: a photograph of Phillips’s mother and aunt from what looks to be several decades ago. With it, Sistahs radiates nostalgia for a not-so-distant past as it celebrates sisterhood—then, now, and to come.