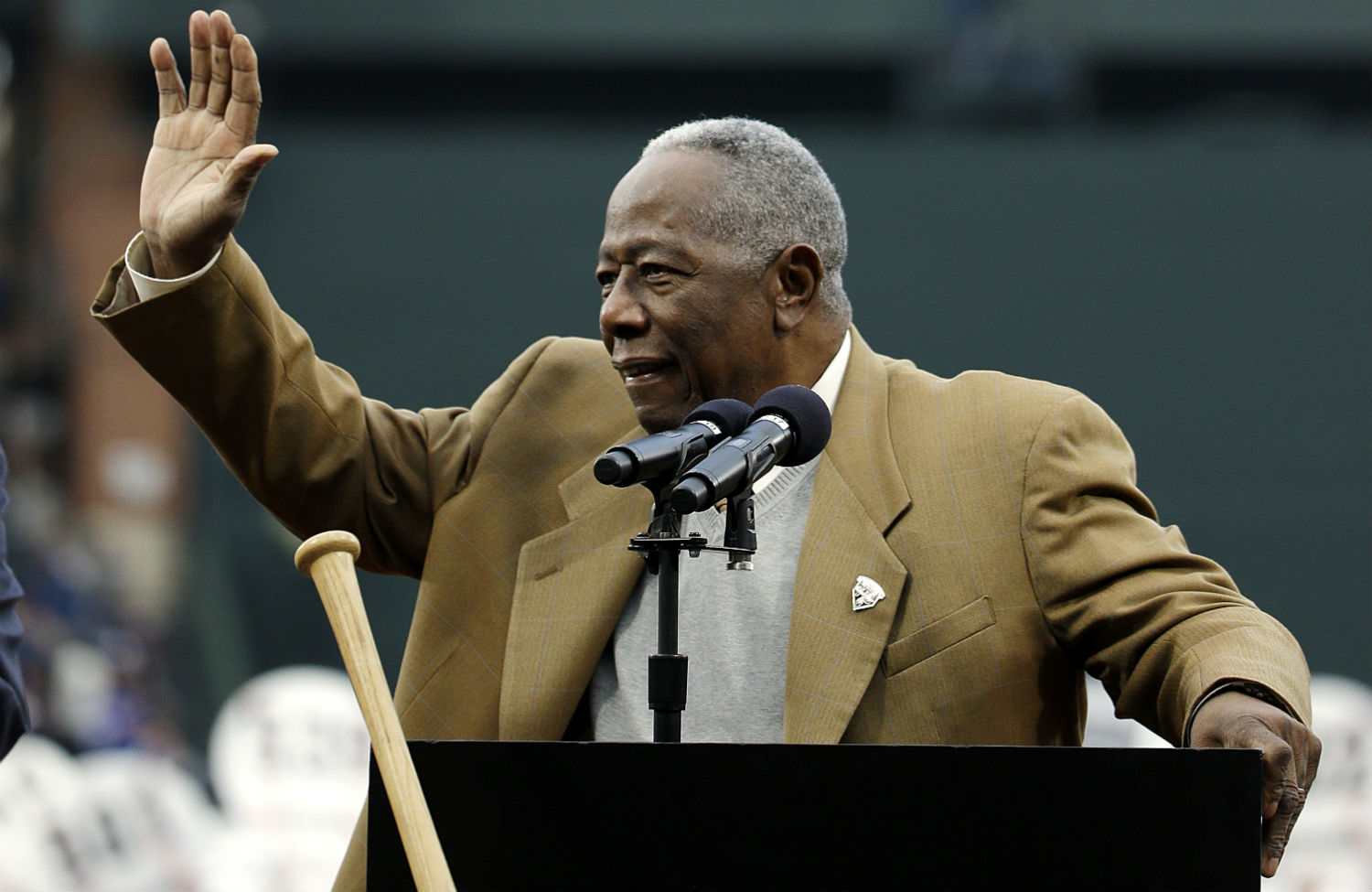 Hank Aaron waves to the crowd during a ceremony celebrating the 40th anniversary of his 715th home run. (AP Photo/David Goldman)

The best sports biography of the last several years was, for my money, The Last Hero: A Life of Henry Aaron, by Howard Bryant. The book makes the case that, in an age of cynicism, we need to study what exactly makes someone heroic, with Henry Aaron being Bryant’s particular profile in courage. What makes The Last Hero particularly compelling is that Bryant doesn’t quantify Aaron’s heroism as being measured by his 755 homeruns but by his ability to keep moving forward while resisting concentrated, poisonous doses of racist invective the likes of which few have ever had to endure. Aaron’s great crime, of course, was challenging the most hallowed record in sports, Babe Ruth’s 714 home runs, while black. (The racists of 1974 were untroubled by the widespread belief in the baseball world of the 1920s that Babe Ruth, an orphan, was a black man “passing” as white.)

Aaron, as Bryant reveals, was always silent until he wasn’t. This man born in the Deep South from a family of sharecroppers, would on occasion uncork a smackdown to the collective racists in this country, like it was an 88 mph fastball over the middle of the plate. He was, pardon the cliché but it fits, a still water that ran deep.

Aaron, now 80 years old, was in the news again this week. We just passed the fortieth anniversary of his famous home run number 715 off of Al Downing and reporters readied the puff pieces, but Aaron was not in a puffy mood. In an interview with USA Today, Aaron spoke about why he still holds onto all of the hate mail and death threats he received while chasing down Ruth’s mark. He said he keeps them to remind himself “that we are not that far removed from when I was chasing the record. If you think that, you are fooling yourself. A lot of things have happened in this country, but we have so far to go. There’s not a whole lot that has changed.”

Then Aaron, just like in his playing career, transgressed his image as a stoic who did not encroach on the world outside the diamond and spoke his mind.

“We can talk about baseball. Talk about politics. Sure, this country has a black president, but when you look at a black president, President Obama is left with his foot stuck in the mud from all of the Republicans with the way he’s treated. We have moved in the right direction, and there have been improvements, but we still have a long ways to go in the country. The bigger difference is that back then they had hoods. Now they have neckties and starched shirts.”

Mr. Henry Aaron, a man on a US postage stamp, just said that the children of the old school racists he tangled with, now have a home in the Republican Party. It is basically 1991 and it is Chuck D saying, “These days you can’t see who’s in cahoots, cause now the KKK wears three-piece suits.”

Forget for a moment the fact that I believe many of us are past the image of President Obama as someone who would be doing the right thing if only it weren’t for these Republicans. From immigration deportation to the drone war, the list of complaints against this administration on social justice grounds is very real. But consider the reality that a White House occupied by an African-American family has provoked a level of bigotry from the right that, no matter what Bill Kristol says, is undeniable. Consider how seeing that family subject to reservoirs of racism would resonate with someone of Aaron’s life experience. Yet above all, consider that Aaron’s main point was that much of the progress on racial issues since 1974 is illusory, and after he said so has been deluged with racist letters and phone calls. The Atlanta Braves organization reports that it has received “hundreds” of threats levied against Aaron. The only difference between 2014 and 1974 is that many of these threats are coming in e-mail form.

One of these lovely notes came from a person named “David” who vowed to burn his copy of Howard Bryant’s The Last Hero. (Given the content of The Last Hero, which discusses the history of racism in the United States for several chapters before even getting to Aaron, I wonder if “David” ever cracked the spine.) It seemed appropriate for me to actually reach out to Bryant and ask why it is that this 80-year-old, soft-spoken man, someone who never joined the Black Panthers or burned a flag, has been able to produce what can only be described as an Aaron Derangement Syndrome in the darkest corners of this country?

Bryant e-mailed me the following, and his observations bear repeated reading.

“When Henry was playing, there were other people who said what he felt. Jim Brown, Bill Russell, Muhammad Ali were more charismatic, better quotes than Henry on civil rights,” Bryant wrote. “But the reason he keeps getting all this mail and taking this abuse is because he’s unflinching. He sees the game better than the rest of us because he’s lived it long enough to know that once you get past the smiles and the handshakes, very little has really changed. Henry knows that if you wait long enough and say a little of the truth, the face behind the mask will reveal itself, just as it did Tuesday night. He’s not going to accommodate you. He’s going to stay quiet and let the silence speak for itself until the words can say it better.”

I do not personally believe that in the world of sports Henry Aaron really is “the last hero.” People from Richard Sherman to Britney Griner to Kain Colter are showing that heroism—as something more than a brand—can still exist in a cynical age. But I do believe that if this new generation of athletes is going to “advance the ball” of social justice, they should learn the manifest lessons from the life of this extraordinary individual. The bigots should also know, as if the last sixty years weren’t proof enough, you are simply not going to scare Henry Aaron.