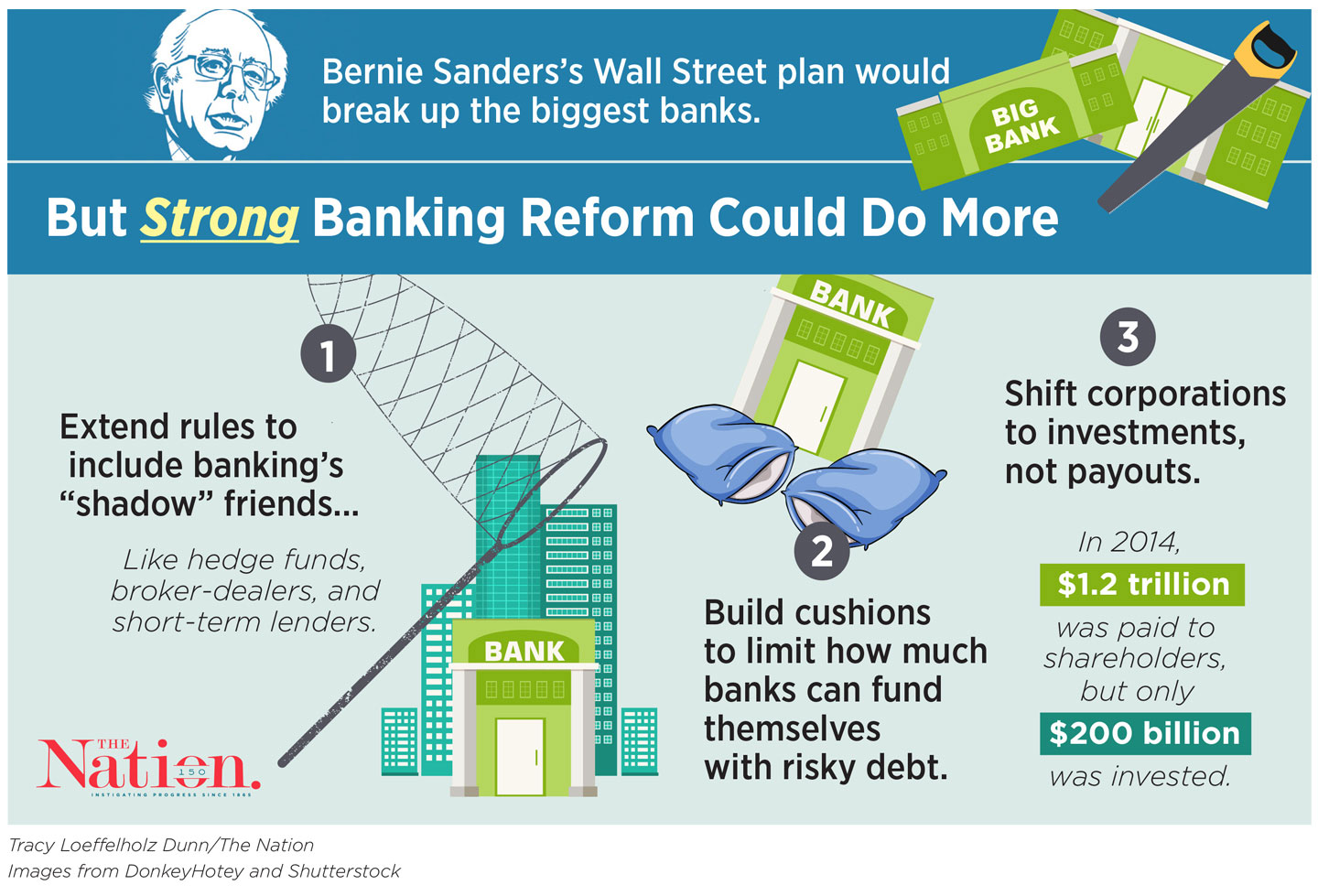 In advance of the Iowa primary, Hillary Clinton and Bernie Sanders have duked it out over who would tackle Wall Street best. Clinton’s reform package aims wide, extending scrutiny from the banks to smaller players who played an outsized role in the financial crisis. Sanders—who, unlike Clinton, has rejected Wall Street money—actually takes a narrower approach that favors a popular but insufficient strategy to “break up the banks.” If Sanders wants to challenge modern finance, he should incorporate and surpass Clinton’s plan.

It’s helpful, first, to understand why many find Sanders’s approach insufficient. Sanders wants to break up the banks in two ways: by size and by line of business. Picture a horizontal cut making the largest banks smaller. Then picture a vertical cut separating ordinary banks from the investment banks. That would be the reintroduction of the Depression-era Glass–Steagall Act, which is at the core of Sanders’s proposed reforms.

Breaking up the big banks is a crowd pleaser, but it wouldn't fundamentally change Wall Street.

However, the financial crisis started with the failure of Bear Stearns and Lehman Brothers. Neither of these were traditional banks, so Glass–Steagall wouldn’t have changed them. The panic created by those two failures spread through many other financial institutions, creating, for example, runs on money-market mutual funds. These, too, exist outside the traditional banking sector and would not be addressed by Sanders’s plan.

The tactic would also change the financial landscape less than many hope. The main policy tool proposed has been to cap the banks’ risky debt at 3 percent of the economy, or about $522 billion. That cap is larger than that of Bear Stearns, and not much smaller than Lehman’s $613 billion when it went bankrupt. A firm like Goldman Sachs would only have to downsize by about a third in order to make the cap—which would hardly change its power over markets and politics.

Because he views their primary sins as political—big banks wield big influence—Sanders focuses on making the banks smaller. But the left can and should change the way that modern finance shapes the economy directly.

Sanders could start by emphasizing the cushion that the financial sector needs to maintain in the event that times go bad. These cushions are called “capital requirements”; they limit how much banks can fund themselves with riskier forms of debt. It’s too easy right now for any financial institution, regardless of its structure or size, to quickly blow itself up with too much debt, destabilizing the economy. The Dodd–Frank Act already made an important start here: JPMorgan Chase slimmed down 6 percent based on the act’s initial requirements, and General Electric broke off its finance unit rather than comply. Building through Dodd–Frank is a perfect place to start.

Sanders also needs to address the “shadow banking” sector: short-term lending and borrowing in arcane financial markets like commercial paper and repo, which invite the risks of banking without any of the accountability. Reducing leverage and increasing requirements on these players is a necessary first step. These reforms would reduce risky activities across several kinds of institutions.

Finally, finance does bad things besides crashing our economy through risky derivatives. Since the “shareholder revolution” of the 1980s, Wall Street has pushed companies away from investment and toward high shareholder payouts. Corporations gave more than $1 trillion in buybacks and dividends to shareholders in 2014, largely to keep them happy and avoid takeovers. This far exceeds the roughly $200 billion these companies invested. Finance is sucking money out of productive enterprises rather than spurring investment in them. Rebalancing this power is essential for any left agenda.

Hillary Clinton is proposing reforms that address these problems, with a risk fee for debt and a focus on “short-termism” for investment. Republicans are likely to pay lip service to these issues, while stressing ways to weaken the progress that has been made. Sanders could immediately change the nature of this debate by proposing even stronger reforms, pointing toward a positive vision of finance.