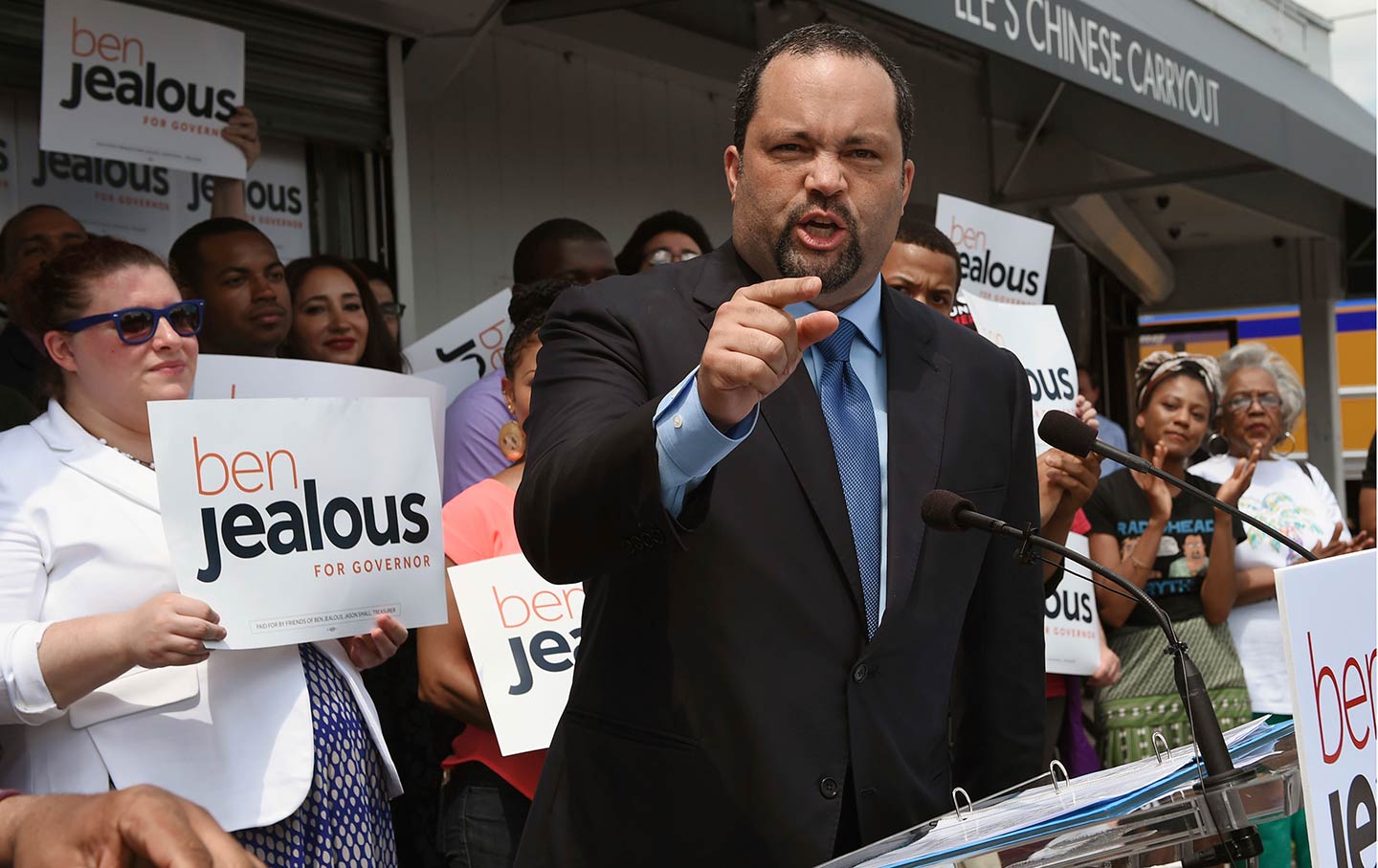 Ben Jealous announces his bid for governor of Maryland in West Baltimore on May 31, 2017. (Kenneth K. Lam / The Baltimore Sun via AP)

Bernie Sanders did not win the Democratic presidential nomination, but he did create a muscular and highly engaged political movement that is active on the ground in every state. This movement extends beyond the group that evolved out of the Sanders campaign, Our Revolution, finding expression in a variety of organizations (the Working Families Party, Democracy for America, Progressive Democrats of America, Democratic Socialists of America) and in dozens of campaigns for local, state, and national office.

Sanders does not direct the movement, which has many components and moves in many directions. But he still defines it for millions of Americans. And when he makes major endorsements, they are big deals that make big news. Such is the case with his endorsement of Ben Jealous, the former NAACP president who is running for governor of Maryland. “It sounds like Maryland is ready for a political revolution,” Sanders told a a cheering crowd at the Silver Spring Civic Building Thursday morning, as he hailed Jealous’s “Lifetime of courageous activism” and ability to “speak to every community.”

Jealous was a key backer of Sanders in 2016, traveling with the candidate and delivering one of the most powerful addresses at the Democratic National Convention. But long before he became associated with the campaign, the 44-year-old organizer on issues ranging from voting rights to mass incarceration to environmental justice and economic inequality was identified as a likely contender for high office. Now he is bidding for a governorship that Democrats lost in 2014 but can win in 2018.

“Now is the time to elect unapologetic progressive voices across the country." -- Nina Turner, @OurRevolution

Sanders is backing Jealous as an act of loyalty to a political ally but also a bet on the future of progressive politics in Maryland and America. “With Ben as governor, we can make health care a right, not a privilege,” says Sanders. “We can create a minimum wage which is a living wage. We can stop the school-to-prison pipeline and end mass incarceration. We can make college tuition affordable, protect our environment and create good-paying jobs. Ben’s campaign has only just begun, but he has already generated tremendous grassroots energy from working families and young people throughout Maryland.”

All true. But what progressives also get is a new face on the national political stage. If Jealous wins the Democratic nomination in a crowded primary field that features a number of capable contenders, if he goes on to defeat Republican Governor Larry Hogan, and if he succeeds in making Maryland both a bastion of resistance to the Trump presidency and a center of progressive innovation, his name will eventually appear on lists of presidential and vice-presidential prospects.

Jealous now has his focus on Maryland, a state where his roots run deep and where there is plenty of interest in his declaration that “It’s time for Maryland to get back to doing big things again.” But accomplishing big things in one state has the potential to shape not just that state’s debate but also the discussion about what comes next for America. “It is imperative that we elect a bold, progressive governor who will fight on behalf of middle and working class families,” Our Revolution president Nina Turner said in announcing the group’s endorsement of Jealous. “Now is the time to elect unapologetic progressive voices across the country.”

As those progressives are elected, they will become definitional figures. Bernie Sanders knows this. He is actively seeking to share the spotlight. Indeed, with his endorsements of Jealous and other next-generation contenders, he is turning that spotlight in new directions. No one who knows Bernie Sanders imagines that he will cease to be a vital figure in the movement—the movements—that have extended from his 2016 candidacy. But he is seeking to expand those movements, to build them up and out, and to invite others into leadership roles. The purpose is to make it clear that the next American politics will be bigger and bolder, more inclusive and diverse, than the narrow and dysfunctional politics it is certain to replace.