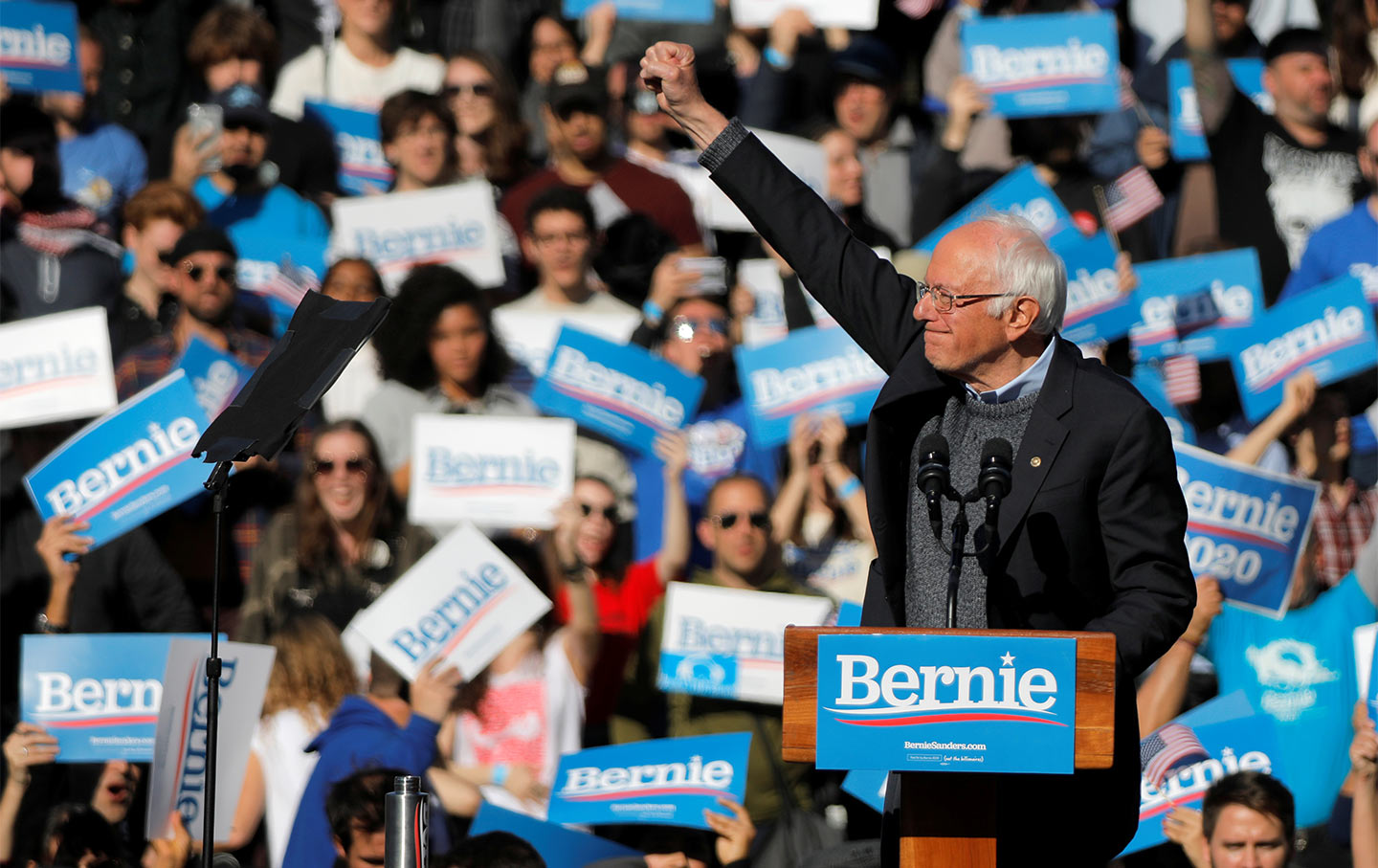 The line to enter Queensbridge Park started to move just before 11 am. Music was blasting from distant speakers as people with varying sorts of Bernie Sanders regalia—T-shirts, hats, “Feel the Bern” and “Birdie” pins, and Bernie placards—inched forward.

One man, dressed in an imitation Sanders suit, sported an oversized paper-mache Sanders head and held a sign that read enough i$ enough, and others carried paper-mache Bernie dolls. Democratic Socialists of America canvassers inched right along with the crowd and many could be seen catching rally attendees as they entered the park. One volunteer staked out her space a few feet from DSA’s table outside the park, with a sign that briefly explained primary campaign law. Diane Bullock, a Western Connecticut DSA member and cofounder of Medicare for All Connecticut, who traveled to the Queens rally specifically to register voters for the primary, yelled out to passing rally attendees that unless they were registered to vote as a Democrat at their current address (not as an independent), they would not be permitted to vote for Bernie Sanders in the primary election. She had been there with her husband for more than an hour before proudly declaring that they had “registered 50 people today!”

Inside the park, people danced their way to a spot in the growing crowd. DSA member Emma Caterine, an attorney who specializes in community economic development while advocating for the working class, said the organization couldn’t have asked for better canvassing conditions. She praised the Sanders campaign for its transition from the message of inclusion to the action of inclusion, looking around the park at the crowd’s diversity in age, race, gender, and sexual identity. “The campaign has shown that it’s investing in its people. By reaching out to community organizations and asking them, ‘Is our platform good on these issues?’…by inviting them to share the stage with him,” she says, Sanders and his team are embodying their newly branded slogan, “Not me, us.”

Over the course of the morning and early afternoon, the crowd was greeted by Dr. Jane Sanders; documentary filmmaker Michael Moore; mayor of San Juan, Puerto Rico, Carmen Yulín Cruz; cochair of Sanders’s 2020 campaign Nina Turner—who brought on stage a contingent of local elected officials, including Julia Salazar and Ron Kim—and Tiffany Cabán, who during her impassioned introduction of Alexandra Ocasio-Cortez, paused to let shouts of “You got robbed!” ring out.

Before introducing presidential hopeful Bernie Sanders to a screaming crowd of more than 20,000 people at his campaign rally in Queensbridge Park on Saturday, Representative Alexandria Ocasio-Cortez, who affectionately called Bernie “Tio”—“uncle” in Spanish—made sure to thank “all our volunteers, staff, and organizers” on the ground. They are the ones who have invested their time, their “sweat and tears” toward bringing a “working-class revolution to the ballot box of the United States of America,” she exclaimed.

And then the presidential candidate took the stage.

He first thanked everyone who had brought his campaign to life—from his wife, Jane, to all the other speakers who had preceded him, to every supporter present and not present. For about an hour, he engaged his audience by reinforcing his beliefs in and plans to implement policies that those who’ve followed his campaign have become familiar with—canceling student debt, coupled with tuition-free public colleges and universities; comprehensive immigration reform that includes reviving DACA and a path to citizenship; ending the death grip of a “racist, criminal justice system”; eliminating poverty and homelessness; and of course, instituting Medicare for All.

Sanders named a long list of opponents that both he and the people behind him have to face in the upcoming elections. Sanders singled out the Democratic establishment as one of those opponents who have been determined to keep the status quo when it comes to the “real change that is long overdue.” He recalled the recent Democratic debates that took place in Ohio days ago. The claim that some of his fellow candidates have made that a radical transformation of our society is only a pipe dream is one Sanders unequivocally rejects. Borrowing a quote from Nelson Mandela, Sanders spoke directly to them and all his naysayers when he offered that everything, “always seems impossible… until it’s done.”