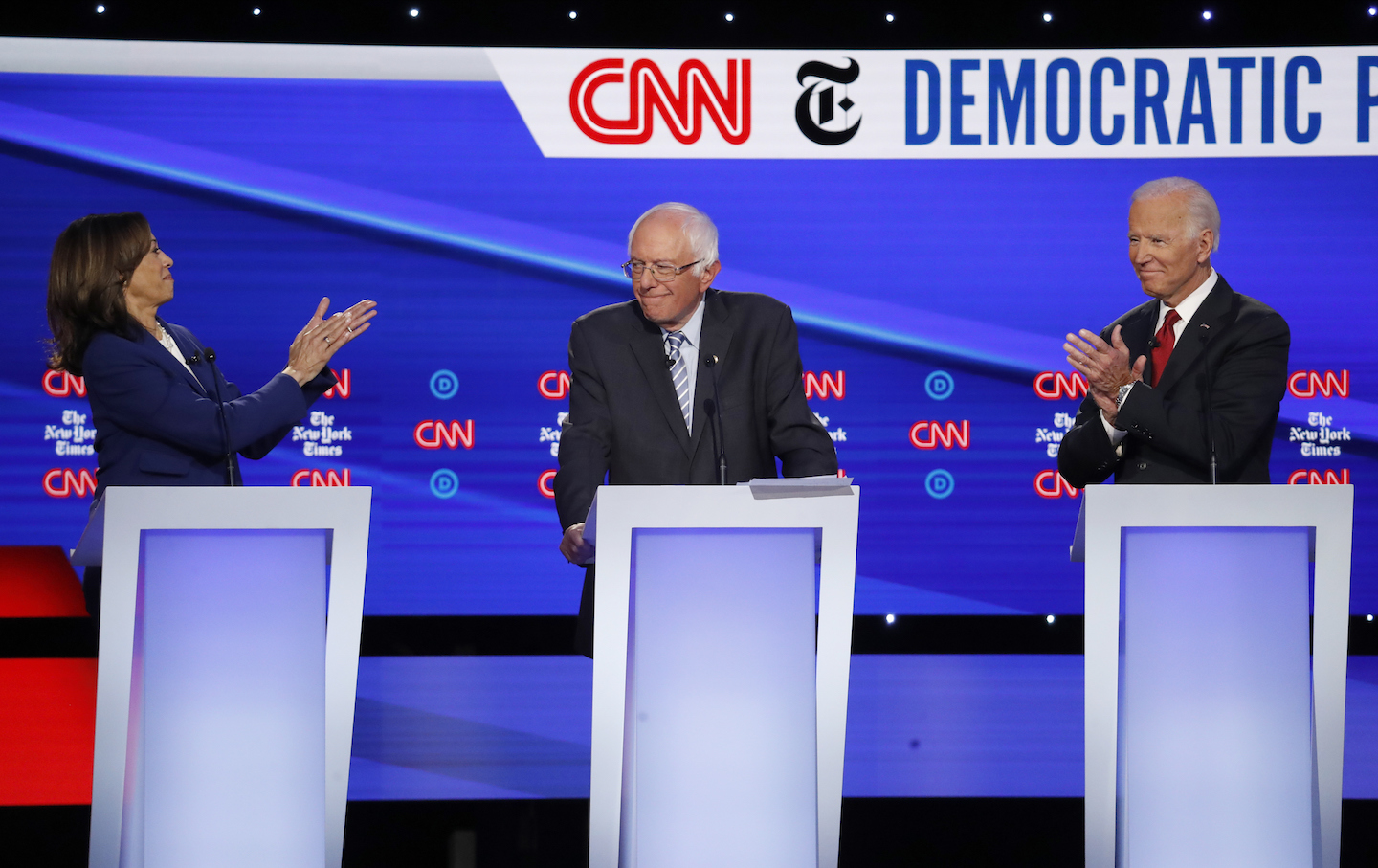 Toward the end of the second hour of a long and often unfocused Democratic debate on Tuesday night, Vermont Senator Bernie Sanders elbowed his way into a discussion about the opioid crisis and the drug war.

“We’re moving on, Senator,” said moderator Erin Burnett, who signaled that she wanted to open a discussion about the health and age of the front-running contenders for the Democratic nomination. Burnett said, “I want to start with you, Senator,” and it was clear she wanted to discuss the heart attack that had sidelined the 78-year-old senator for two weeks.

“I’m healthy, I’m feeling great,” said Sanders, “but I would like to respond to that question.”

New Jersey Senator Cory Booker jumped in to note that “Senator Sanders is in favor of medical marijuana. I want to make sure that’s clear, as well.”

“I do,” said the senator from Vermont, without missing a beat. “I’m not on it tonight.”

The crowd laughed and applauded, and Burnett relented. “Go ahead and finish your point, and then I’ll ask my question, Senator.”

With that, Sanders tore into the issues raised by the opioid crisis, delivering a message that reminded everyone who was listening of why he remains an absolutely necessary contender in the 2020 race:

Let’s take a deep breath. Take a look at this opioid epidemic. You have executives, CEOs of major pharmaceutical companies, making tens of millions of dollars a year. And in this particular case with the opioids, they knew that they were selling a product to communities all over this country which were addicting people and killing them. And last year, the top 10 drug companies made $69 billion in profit. This is what unfettered capitalism is doing to this country. And it’s not just the drug companies. Right now, the CEOs in the fossil fuel industry know full well that their product is destroying this world. And they continue to make huge profits. That is why we need a political revolution that says “enough is enough to this behavior.”

Burnett came back to her question about the senator’s health and age. But he has already answered it with a debate performance as robust as any he offered in the 2020 campaign—and, arguably, since he began contending for the presidency in 2015. When the moderator finally asked the question, Sanders replied almost gleefully. “Well,” he said, “let me invite you all to a major rally we’re having in Queens, New York, berniesanders.com. We’re going to have a special guest at that event. And we are going to be mounting a vigorous campaign all over this country. That is how I think I can reassure the American people.”

The hint about the “Bernie’s Back” rally in Queens lit up social media. And the speculation was confirmed before the night was done. The Washington Post reported that Representative Alexandria Ocasio-Cortez, a 2016 Sanders campaigner who has emerged as one of the most dynamic leaders of the party’s progressive wing, would indeed endorse the senator.

“The endorsement could be a blow for Sen. Elizabeth Warren, D-Massachusetts, who, like Sanders, is running on a platform of sweeping liberal change and who has emphasized her role as a female pioneer,” observed the Post, which noted that “her backing was a sought-after prize in the Democratic primary, and it was widely assumed that she would endorse either Sanders or Warren, the most liberal figures in the contest.”

Moments later came the news that another member of “the Squad” of young progressive women who were elected to the House in 2018, Minnesota Representative Ilhan Omar, would also back Sanders. There were reports on Tuesday night that Michigan Representative Rashida Tlaib would also endorse. But on Wednesday, Tlaib said she was not endorsing quite yet. She did announce, however, that she would be giving Sanders a tour of her district on October 27, telling The Detroit Free Press that, “I need to know that anyone I choose to endorse will fight for my residents, and I appreciate the opportunity for them to have a dialogue with Sen. Sanders about these critically important issues.”

The question of whether his campaign will transcend the questions about health and age that debate moderators will keep asking is going to be resolved by the voters. But on Tuesday night, it was clear that Bernie Sanders was ready, once more, to stake his claim on their serious consideration.