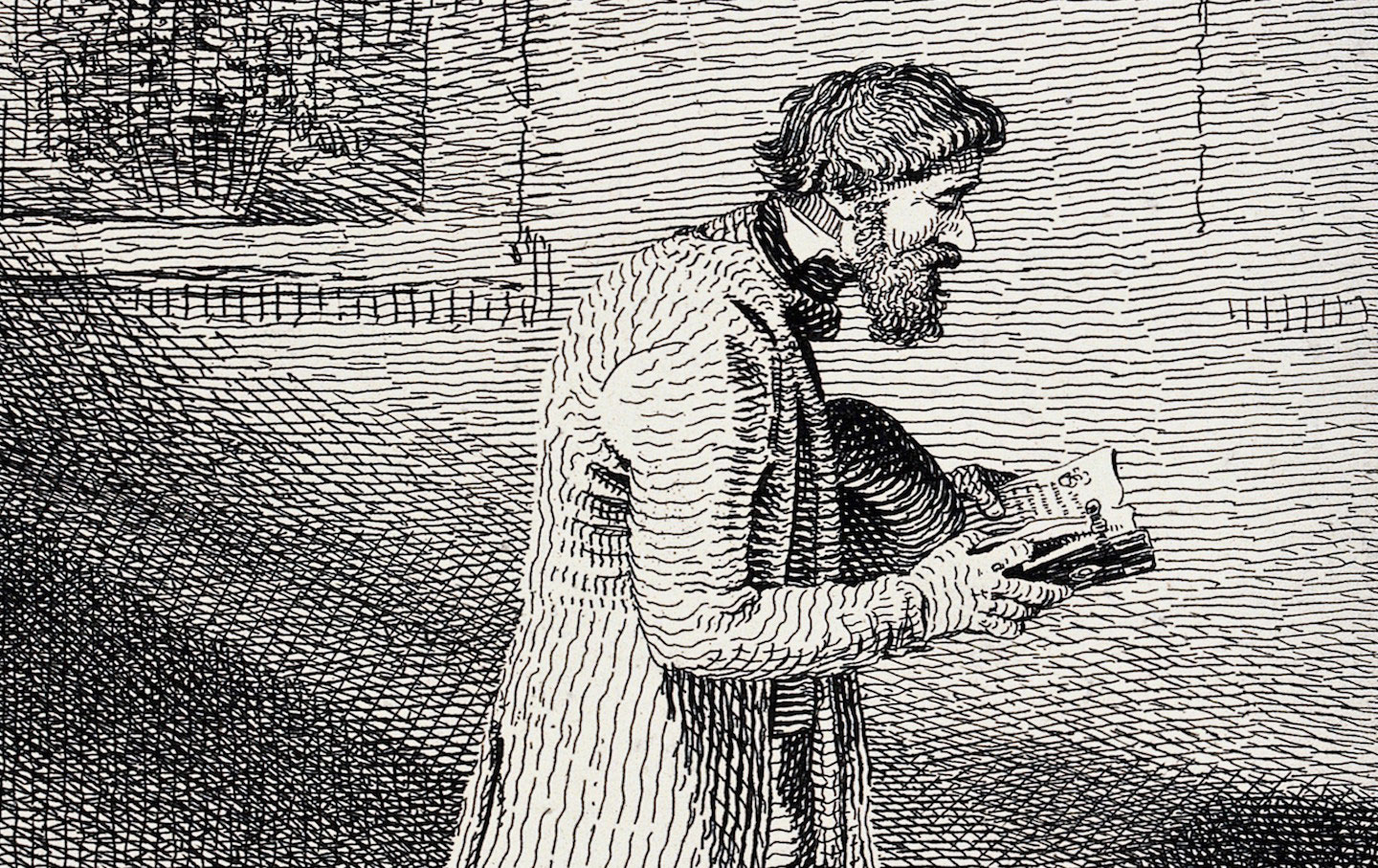 A bearded man walking the streets deeply engrossed in reading a book. Etching by J.T. Smith, 1815. (Courtesy of the Wellcome Collection)

The rules that govern English usage have never been particularly democratic. Why do we take “cues” but stand in “queues”? Why do we wake up “every day” but tolerate “everyday” annoyances? In the introduction to Dreyer’s English: An Utterly Correct Guide to Clarity and Style, Benjamin Dreyer, the longtime copy chief at Random House, quotes an acquaintance’s comparison of copy editors to “priests, safeguarding their faith.” Copy editors can articulate the language rules that most aspiring writers have only unconsciously internalized; their pronouncements are accepted on faith by anyone used to relying on spell-check. But even though the type-first, think-later writing associated with social media has rarefied the copy editor’s status ever more, that rise in stature has coincided with the profession’s decline. The publishing world resounded with dismay and opprobrium when The New York Times laid off its copy desk in 2017. A year and a half later, the Gray Lady remains the paper of record, its reputation undimmed by the now routine correction of dates, spellings, and misstatements that appear at the foot of its articles online.

Dreyer's English: An Utterly Correct Guide to Clarity and Style

Yet, even with new-wave outfits like Vox Media also starting to shed their comma-minders, Dreyer’s profile as Twitter’s premier grammarian has managed to keep rising. He’s the type of Twitter user who specifies the difference between acronyms and initialisms; corrects Donald Trump’s most mind-bending missives; and half-jokingly laments, “He died as he lived, wearily pointing out that ‘myriad’ was a noun before it was an adjective.” In Dreyer’s English, he brings his shtick to the printed page in a purported attempt to diffuse the dreamy haze surrounding his profession and make his readers’ work “Better. Cleaner. Clearer. More efficient.”

However generous that sounds, Dreyer’s adherents will be delighted to find that the pedantic, wisecracking voice he cultivates online remains in full effect in the book’s early going. “The proscription against the singular ‘they,’” he writes, “is yet another of those Victorian-era pulled-out-of-relatively-thin-air grammar rules we’ve been saddled with,” and he advises that although one can indeed end a sentence with a preposition, writers should nevertheless “aim for a powerful finale and not simply dribble off like an old man’s unhappy micturition.” Once one makes it through the first few chapters of rules, writing advice, and bathroom humor, though, Dreyer’s English degenerates into a perfunctory series of lists on commonly misspelled and misapplied words. The pivot to reference material (woe betide any reader who attempts to plow through these chapters as written) marks a turn in Dreyer’s voice from mirthful to dull. “There is no x in ‘espresso,’” he instructs, “but you knew that already.”

That so much of Dreyer’s English is consumed with back matter is enough to make the reader question the author’s assertion that his book is intended for her benefit. “I would not attempt to replicate the guidance of the exhaustive books that sit and always will sit, and be constantly referred to, on my own desk,” he promises, and indeed, when the grammatical vines get particularly impenetrable, Dreyer deploys quotes from the usage guide Words Into Type as a machete, unsheathing the venerable resource (beloved by publishing types, albeit basically unheard of among civilians) to clear the way. The necessity of harking back to such a staid authority points to the elemental problem with books like Dreyer’s: They split the difference between accessibility and utility, leaving themselves little chance of reaching either hardcore word nerds or your uncle who spends way too much time on Facebook.

Ultimately, Dreyer’s English is a literary curiosity, more a coffee-table conversation starter than a style guide. Which means that Dreyer writes for a self-selecting audience: When he illustrates the way that incorrect usage is permitted to suitably famous authors with an anecdote about working with Richard Russo, his goal is to elicit a knowing smile, not to make the reader’s writing “Cleaner. Clearer. More efficient.” Rather than sharing shelf space with tomes like Garner’s Modern American Usage, Dreyer’s book seems best relegated to the domain of Between You & Me: Confessions of a Comma Queen, the memoir cum style guide that The New Yorker’s Mary Norris published in 2015. That book served to transform Norris from a copy editor virtually unknown outside the magazine’s staff and contributors into a major content creator: It birthed a series of videos, a TED talk, and a sequel, Greek to Me: Adventures of the Comma Queen, due later this year. 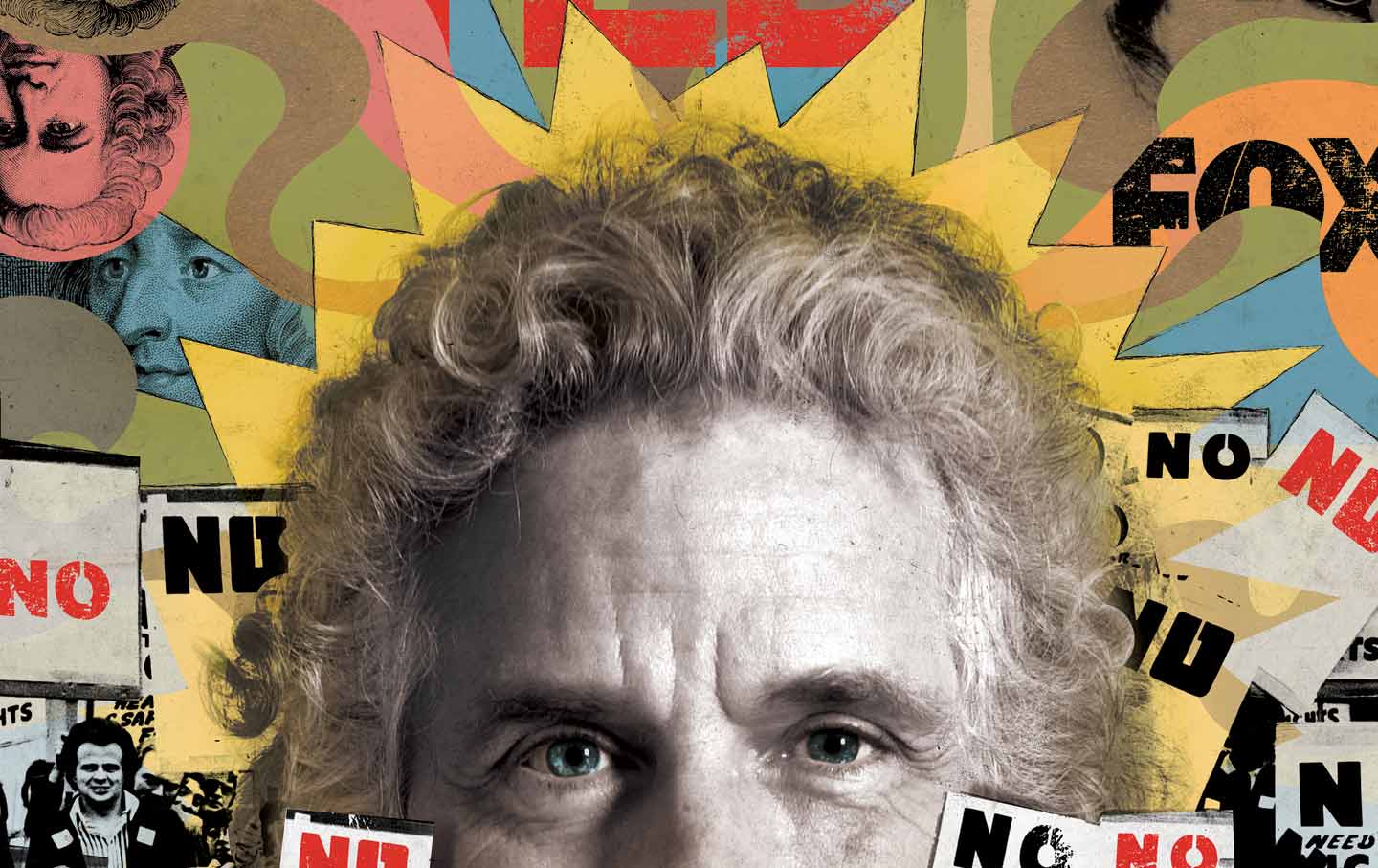 One can’t help but wonder if Dreyer had a similar breakout moment in mind. Perhaps his book is simply meant to lift his brand off Twitter and into the zeitgeist. (If so, it’s working, with a profile in the Times prompted by the book’s release gushing about Dreyer’s “magical abilities to ferret out inconsistencies, eradicate inaccuracies and fix convoluted sentences.”) Indeed, the numerous references to Trump’s election—paired with the bafflement that this ignominious event inspired in enclaves like Dreyer’s Manhattan neighborhood—help to position him as someone who resists the decaying not just of our politics but of our culture as well. Much as Norris’s new book aims to reassert the influence of ancient Greek on contemporary language, Dreyer’s looks to the rules of English to right a world gone sideways. In terms of a copy editor’s traditional role—laboring in quiet service to a magazine’s reputation or a publishing house’s standards—that impulse feels necessary, even noble. But Dreyer is not your typical modest, yeoman-like copy editor. He’s a quipster, a comedic literary performer, and, as so often happens with stand-up comedians, the moment he starts punching down, he loses his audience entirely.

When Dreyer introduces Judi Dench’s character in Philomena as a “heroine I will attempt to neutrally describe as being of the working classes” or moans, “If there’s a less classy word in the English language to describe classiness than ‘classy,’ I’d like to know what it is,” he seems less interested in helping the reader make herself understood than in scoring easy points with his self-satisfied fellow travelers at the expense of the deplorables who got us into this mess in the first place. After all, the only people whom Dreyer could possibly be addressing when he assumes they know the correct spelling of “espresso” but not, say, the more dowdy “poinsettia” are the sort who enjoy tittering about their own sophistication. Dreyer may manage to diffuse the quasi-religious mysticism surrounding grammar, but what’s revealed amid the haze is the enduring dominance of the same aristocracy that first codified the translation of spoken English into text. Even as he chides the Victorians for their arbitrary rules, he relentlessly aligns himself with their contemporary equivalents.

Dreyer’s English, then, marks the ascendance of copy editing from an invisible process long considered foundational to publishing outfits large and small to a class signifier. Books like Dreyer’s and Norris’s proffer impeccable grammar and usage as a means not simply to improve your writing, but to relieve your class anxiety as well. Of course, the congregants beseeching the copy editor’s tutelage are hardly ordinary people. That acquaintance who compared Dreyer to a priest in the first place? Broadway grand dame Zoe Caldwell, whom he met at a garden party on New York’s Upper East Side.

Correct usage is preferable, clarity a noble goal. But given the market’s devaluation of the written word, publishers have set different priorities, and copy editing has, unfortunately, come to be seen as a luxury. That such a view has been able to coalesce among the plutocrats who now control the vast majority of our media infrastructure is a crying shame. Dreyer’s English is hardly a corrective against the trend. Instead, it’s a style guide for the 1 percent, destined only to confirm to the snobs and sycophants who will doubtlessly cherish it that they really are smarter than the rest of us.