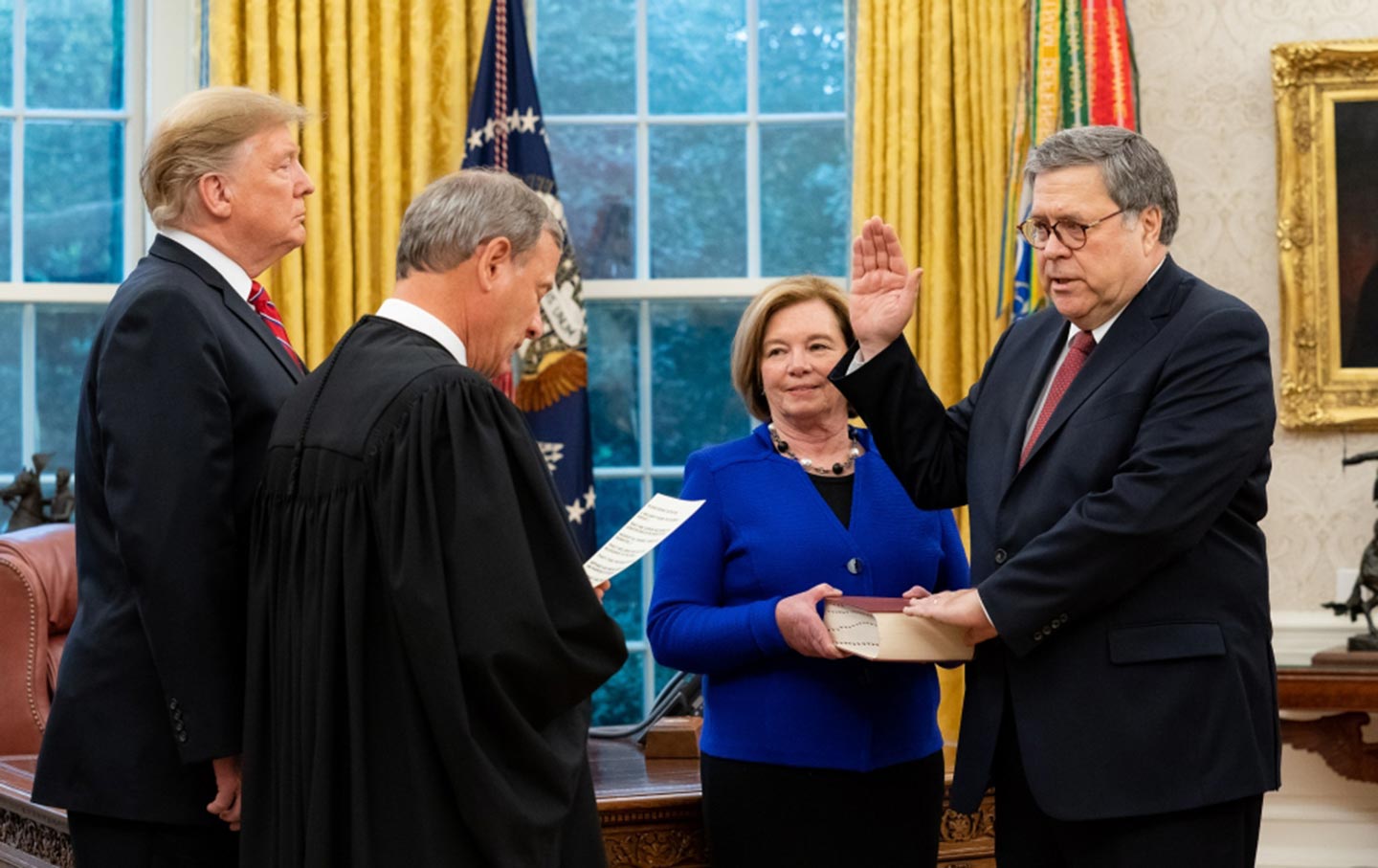 President Trump participates in the swearing in of Bill Barr as attorney general on February 14, 2019. (Tia Dufour / Creative Commons)

The attorney general has made it clear that when it comes to questions about wrongdoing by the president of the United States, he will not act as a committed public servant operating “according to the law” and ensuring “fair and impartial administration of justice for all Americans.”

Barr’s shameless performance at a Thursday-morning press conference anticipating the long-delayed release of the report from special counsel Robert Mueller on a two-year investigation into Trump, his aides, and allegations of Russian election interference confirmed the attorney general’s absolute abandonment of the DOJ’s mission.

Barr’s hubris was staggering. He repeatedly and aggressively absolved the president, knowing that in a few short hours the Mueller report would contradict his pronouncements.

The release of the heavily redacted report made it clear that Barr has been engaged in a deliberate and ongoing project of covering for the president who appointed him. Far from clearing Trump, the report turns out to be more damning with regard to the president than even some of his critics had imagined. It points to lying and lawless acts by Trump’s associates, and meltdowns by a president who, we learn, responded to the news that the inquiry had been launched by ranting: “Oh my God. This is terrible. This is the end of my presidency. I’m fucked.”

That might still be the case, as the report provides detailed evidence of offenses that the Congress can and should interpret as obstruction of justice—including the revelation that Trump tried to have Mueller fired.

The attorney general’s dark machinations on behalf of his political benefactor began with last month’s disingenuous memo assessing the Mueller report and continued into Thursday morning, when he met with the press for purposes of spinning things on the president’s behalf. Barr sought to preempt an honest discussion of a report that contradicts Trump’s claim of exoneration. “The Attorney General seemed almost to be acting as the counselor for the defense, the counselor for the President, rather than the Attorney General,” observed Fox News Sunday host Chris Wallace, who suggested after the press conference concluded that Barr was “making a case for the president.”

Remarkably, Barr proposed a legal fantasy that the “context” in which the president found himself might somehow justify lawless actions. “In assessing the President’s actions discussed in the report, it is important to bear in mind the context. President Trump faced an unprecedented situation,” he declared.

As he entered into office, and sought to perform his responsibilities as President, federal agents and prosecutors were scrutinizing his conduct before and after taking office, and the conduct of some of his associates. At the same time, there was relentless speculation in the news media about the President’s personal culpability. Yet, as he said from the beginning, there was in fact no collusion. And as the Special Counsel’s report acknowledges, there is substantial evidence to show that the President was frustrated and angered by a sincere belief that the investigation was undermining his presidency, propelled by his political opponents, and fueled by illegal leaks.

This was a shocking statement coming from the chief law-enforcement officer of the United States. The fact that the president was under scrutiny and faced public pressure is not a justification for wrongdoing by that president. If this standard had applied in the 1970s, then Richard Nixon would have likely finished his second term as president rather than resigning in the face an impeachment inquiry. Maryland Congressman Jamie Raskin, a former law professor, noted that by any legal standard, “the argument that Trump lacked the intent to obstruct because he was ‘frustrated and angry’ is ridiculous.”

The attorney general was literally speaking for the president in the language of a lawyer making a case on behalf of a troubled client. Or, as Raskin explained: “Barr is acting like a paid federal defender here.”

Barr did this hours before the formal release of the 400-page report from Mueller. Then, in one of the most embarrassing charades ever seen in a city that is not without a history of embarrassing charades, Barr engaged in a question-and-answer session that was all about “my response to the report” that no one in Congress had seen, no one in the White House press corps had seen, but that he revealed he had shared with the White House.

The attorney general’s response was deliberately deceptive and arrogant in the extreme. Within hours, his statements were contradicted by the very report he was responding to—a report that found “substantial evidence” that President Trump fired James Comey as FBI director because Comey would not clear him.

This is the bottom line: William Barr appeared on Thursday morning as Donald Trump’s messenger. He delivered Trump’s talking points, knowing that they were contradicted by the Mueller report. Barr repeated Trump’s self-serving and irreverent “no collusion” language not once, not twice, but again and again and again. He echoed White House Press Secretary Sarah Sanders’s over-the-top apologies for the president, rather than the understanding of the law and the Constitution embraced by the attorneys general, Republican and Democratic, who preceded him.

As such, Barr has ceded any credibility and any honest authority in this matter. We cannot count on this attorney general to uphold the rule of law or to defend the Constitution.

As Congressman Raskin says, “It’s up to Congress now.”