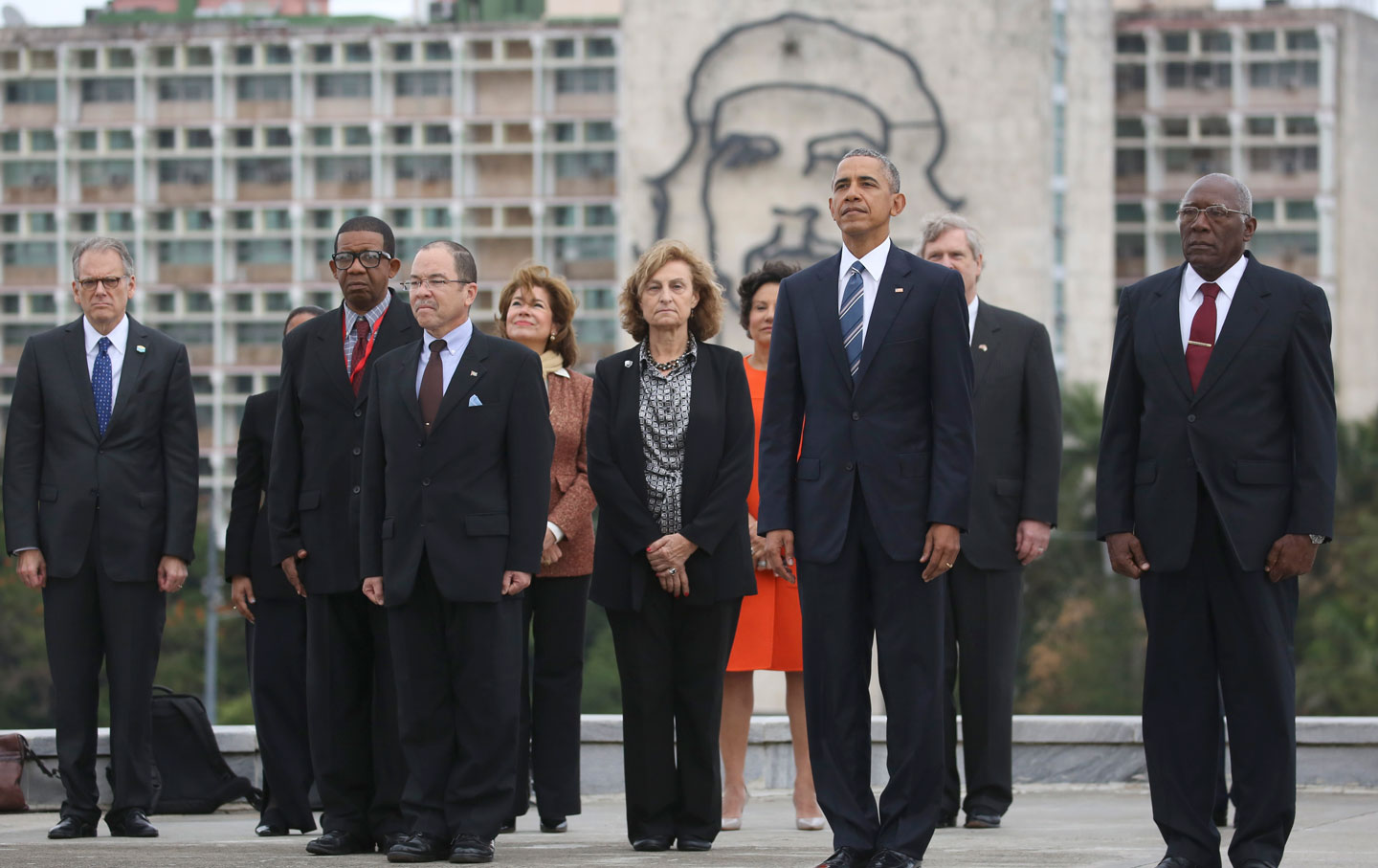 US President Barack Obama and others stand in front of a monument to Che Guevara during a ceremony at the José Martí Memorial in Havana, Cuba on March 21, 2016. (AP Photo / Dennis Rivera)

“I have come here to bury the last remnant of the Cold War in the Americas. I have come here to extend the hand of friendship to the Cuban people.” Thus did President Obama salute a historic transformation in US-Cuban relations in his speech today at the Gran Teatro in Havana, in the first visit to Cuba by a US president in 88 years. The audience included Raúl Castro and other Cuban dignitaries; the grande dame of Cuban dance, Alicia Alonso; and a delegation of US senators, representatives, and business leaders. “Somos todos Americanos,” the president added, to applause.

A new chapter has indeed begun in relations between the two countries, as the president completes a series of formal and informal meetings with Raúl Castro, while his business-oriented entourage holds talks with Cuban entrepreneurs and economic ministers, and the Tampa Bay Rays take on the Cuban national baseball team in a display of béisbol diplomacy. In timing, tone, and agenda, the trip represents Washington and Havana’s high-profile effort to “seal the deal” after the dramatic accord to normalize relations, announced simultaneously by both presidents on December 17, 2014.

Since then, the two countries have worked slowly but steadily toward normalizing diplomatic interaction as well as commercial relations, which remain limited by the economic trade bloqeo, as Cubans call the embargo. But with only 10 months left in Obama’s presidential tenure, and the looming unpredictability of the 2016 presidential election, both governments recognize the need to consolidate bilateral ties and lock in the policy of engagement. “We very much want to make the process of normalization irreversible,” said Deputy National Security Adviser Ben Rhodes in his briefing to the media a week before the trip. “So by taking the trip…we will be facilitating more Americans traveling to Cuba, more American businesses operating in Cuba, more benefits to the Cuban people that come from those openings, more exchanges between our countries, and that has a momentum that people, we believe, will not want to reverse going into the future.”

“The path we are on will continue beyond my administration.”

During his press conference with Raúl Castro on Monday, Obama forcefully reiterated that point: “The path we are on will continue beyond my administration.”

When President Obama arrived at the Palacio de la Revolución on Monday morning for his meeting with Castro, he found an actual red carpet awaiting him on the marble stairs of the entrance. Both countries had taken steps to set the popular stage for this presidential summit. Just before leaving for the island, Obama participated in Cuba’s version of a Saturday Night Live–style skit with the country’s most popular TV personality, Luis Silva. The comedian plays a clownish character named Panfilo on the mostly widely watched weekly program, Vivir del Cuento. Panfilo’s running gag is that he is always trying to call the White House, but the president never answers. Then, on the episode just before the trip, Obama actually picks up the phone.

With humble Cuban hospitality, Panfilo offers to pick up the president at the airport in a ’58 Chevy and tells Obama that he can “drink beer and play dominos” during his stay. “I’m impatient to come,” Obama tells Panfilo. “The American and Cuban people are friends.” But, Obama adds, speaking adequate Spanish, “No es fácil”—it isn’t easy—to take this momentous step. “It isn’t easy, but it isn’t difficult either!” Panfilo responds.

On the eve of Obama’s visit, both nations made key announcements to ease the normalization process. On March 15, the administration issued a series of regulatory modifications to the embargo that addressed longstanding demands of the Cuban government. Through executive order, Obama ended the Treasury Department’s punitive fines on multinational banks handling US dollars from Cuba, normalizing Cuba’s ability to use such currency to finance commercial transactions. Obama also authorized Cubans to receive paychecks for work in the United States without having to immigrate. The order, which applies to artists, academics, consultants, and any other Cuban professional working on US soil, also resolved requests from Cuban sports officials that Cuban baseball stars be able to play for the major league teams without having to defect.

Finally, Obama further loosened restrictions on travel to allow individual US citizens to conduct people-to-people diplomacy on their own. The deregulation of travel—Cuba is the only country in the world where US citizens are prohibited by their own government from going on vacation—means that anyone can travel to the island, as long as they don’t spend all their time getting a suntan and conduct at least one informative conversation with a Cuban. The opening of travel comes as United Airlines announced it would begin regular flights from Dulles International Airport in Washington to Havana—directly connecting the two capitals

For its part, the Cuban government announced that it would lift the 13 percent exchange tax it has imposed for years on US dollars, increasing the purchasing value of US currency on the island. Just hours before Obama arrived, the government signed its first agreement with a US corporation since the 1959 revolution: a multimillion-dollar investment agreement with Starwood Hotels and Resorts to manage and provide services for several large, new—and badly needed—hotels in Havana.

Behind the scenes, however, the two governments have wrangled forcefully over difficult issues that continue to impede harmonious ties. As the historic trip approached, the Cuban government sought to establish the parameters of peaceful coexistence, given the dark history of US hostility toward the island, and reasserted demands for the embargo to be completely lifted.

On March 9, the official Communist Party newspaper, Granma, published a forcefully worded, three-page editorial titled “The Visit to Cuba of President Barack Obama.” Addressing the Cuban people and official Washington, Cuba’s leadership made clear that Obama’s trip reflected the strength of the revolution, not weakness.

No one should assume that Cuba had to “renounce any of its principles or cede the slightest bit in its defense” to receive the US president, the editorial declared. The Cuban leadership proudly asserted its contribution to the process of engagement, and reiterated its demands for full normalization of relations: the lifting of the embargo; return of the Guantánamo naval base to Cuban sovereignty; a formal end to USAID “democracy” programs and to US support for dissidents on the island. The United States “should abandon the pretense of fabricating an internal political opposition, paid for with money from US taxpayers,” stated the lengthy editorial.

The issue of US encouragement of dissent became a focal point of contention. In early March, Secretary of State John Kerry abruptly canceled an advance trip to Havana to finalize plans for the president to meet with “members of civil society,” as US and Cuban negotiators continued to sharply disagree on who, specifically, those members would be. In a display of force, Cuban police intercepted and detained the Damas en Blanco—the Ladies in White—during their weekly Sunday protest on the day of Obama’s arrival. The meeting with civil society leaders at the US Embassy took place Tuesday morning

The Granma editorial also stated defiantly that Cuba would remain in solidarity and alliance with the Bolivarian Revolution in Venezuela—reflecting a complicated regional issue in the bilateral relationship with Washington. One of the little-understood benefits of reconciliation between Washington and Havana is the Obama administration’s newfound ability to talk to the Cubans about how officials see the spiraling economic and political crisis in post-Chávez Caracas. Those discussions appear to concern Venezuelan President Nicolás Maduro, who unexpectedly flew to Havana for talks with Raúl Castro—and a photo-op with Fidel—only one day before Obama’s arrival. Maduro made a point of saying that he came as a true friend of Cuba, unlike others “who come with a smile on their face, but with a clenched fist behind their back.”

Rhodes was accompanied to the briefing by several leading US businessmen who had just come from a special forum between Obama, Cuban entrepreneurs, and leaders of the US business community—among them the celebrity chef José Andrés and the CEOs of PayPal, Air BnB, Marriott, and Xerox, among others. The business entourage also included Carlos Gutierrez, a leading Republican Cuban-American and secretary of commerce for the George W. Bush administration, who characterized Obama’s visit as “a great journey of human rights” because it advanced “the right to make a living” in Cuba, and for Cubans “to develop their own vision of their future.”

”I have been a life-long Republican, but I am convinced that this is the right policy at the right time,” Gutierrez stated emphatically. “Cuba is changing and I’m proud to say we are changing with it.”

That was certainly the message Obama has conveyed throughout his historic visit. During his at times awkward press conference with President Castro yesterday—a scene of contrasts between a younger, dynamic US leader and the aging Cuban comandante—Obama repeatedly stressed that change was coming. “The embargo is going to end,” he asserted. “This is a new day—es un nuevo dia—between our two countries.”

Obama’s trip was filled with encounters and experiences that, as he himself admitted, would have been unimaginable just a few months ago. Among the most memorable was that of the president and his family sitting in the front row of the Estadio Latinoamericano at the beginning of the baseball game, alongside Raúl Castro and his family, doing “the wave” together, as hundreds of white doves circled over the infield.

But the most symbolic, and surreal, moment came on Monday morning, when the president laid a wreath at the foot of the famous Jose Martí monument. The statue of Martí, the godfather of Cuban independence, stands at the Plaza de la Revolución—near-sacred ground in Havana, where Fidel Castro gave countless fiery speeches to throngs of Cuban followers over the decades. Under the watchful gaze of the massive iconic images of revolutionary leaders Che Guevara and Camilo Cienfuegos, Obama listened to a Cuban military band play “The Star-Spangled Banner.” The US president was undoubtedly aware of Martí’s perspective on relations with the United States and its imperial designs: “There is that other America, North America, that is not ours, and whose enmity it is neither wise nor viable to encourage,” he wrote, not long before he died fighting Spanish colonial rule in 1895. “However, with firm propriety and an astute independence, it is not impossible—and indeed it is useful—to be friends.”