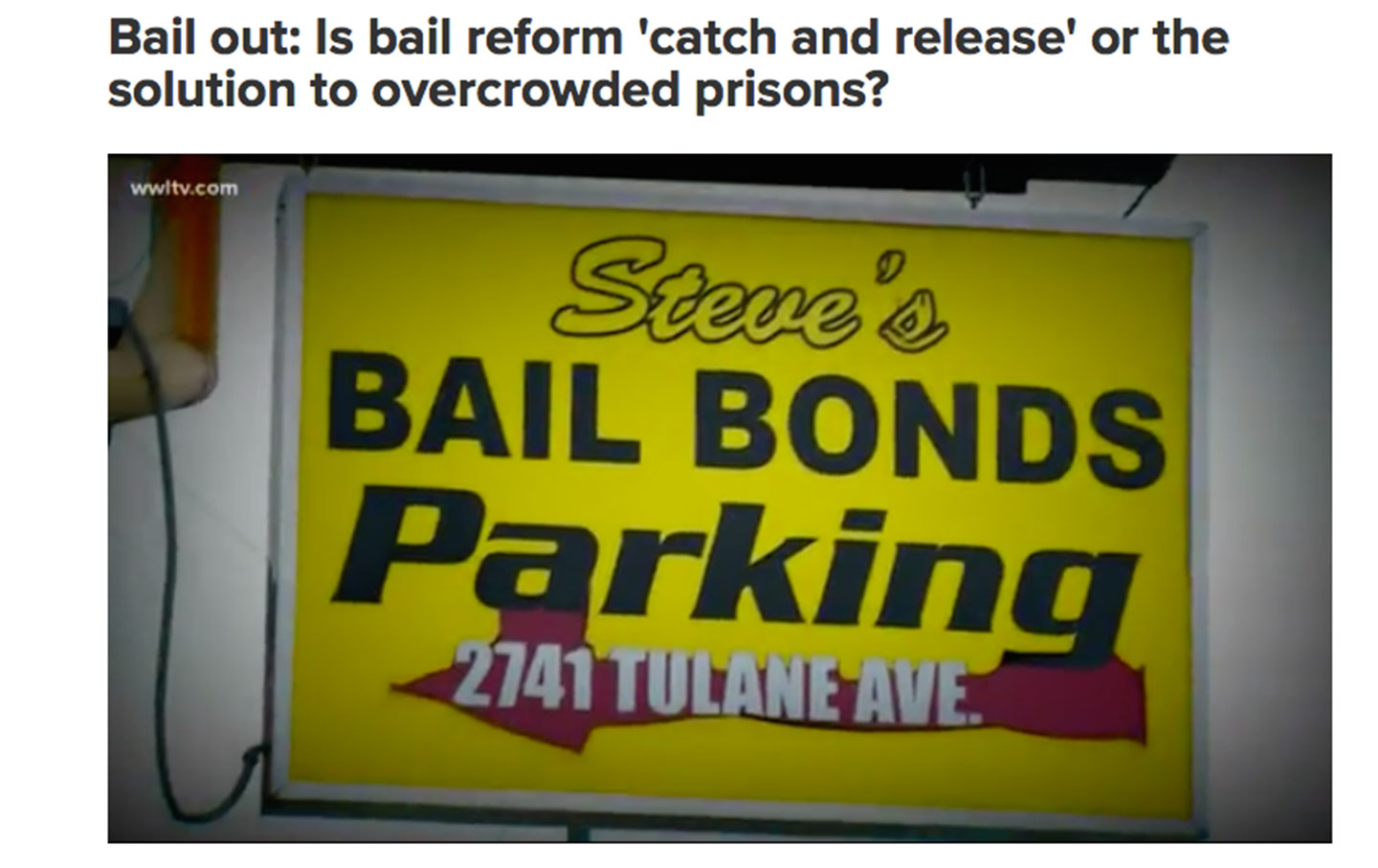 A still from WWLTV’s Bail Out series. (WWLTV)

For years, New Orleans Magistrate Judge Harry Cantrell followed a simple rule when setting bond amounts: Never go below $2,500. This practice landed thousands of poor defendants behind bars, leaving the Orleans Parish Jail with three out of every 10 beds filled by people who simply could not afford their bail amounts.

Last fall, a federal judge ruled Cantrell’s bail-setting practices unconstitutional and called on the city of New Orleans to restructure its entire money-bail system. The ruling came down during a wave of other reforms that caused a significant drop in the average daily jail population. At 1,454 people in custody, the jail population reached its lowest point in 40 years last spring, and Louisiana finally lost the title of most incarcerated state in the country.

Still, the city of New Orleans continues to hold two unenviable titles—the highest poverty rate and highest wrongful-incarceration rate in the United States–and lots of law-enforcement officials seem to want to keep it that way. What’s more, the local media remain preoccupied with anecdotal tales of defendants committing crimes after being released before trial.

This fall, New Orleans’s local CBS station WWLTV debuted a five-part series called Bail Out. Reported by police investigator Mike Perlstein, the series claims to uncover crimes committed by people who were released thanks to bail reform. It features foreboding music and zoomed in mugshots, and describes a series of inflammatory individual cases of people with “troubling criminal histories” released to engage in violence, deal drugs, and miss court dates.

The first episode begins with ominous vignettes of a convenience store that fade into shots of a young black man’s mugshot and a typewritten rap sheet, accompanied by Perlstein’s voice narrating the man’s attempt to rob the convenience store after paying a “low” bail of $250. New Orleans Chief Public Defender Derwyn Bunton—who’s known as an outspoken, progressive critic of the New Orleans criminal-justice system—later explains that a citywide effort to lower average bails is underway, and has thus far not been correlated with any increase in the crime rate.

But our narrator is not interested in these statistics.

“Let’s take a closer look,” he intones, “starting with Gino McDowell.” The robbery is re-narrated in lurid terms, and followed by three other mugshots and rap sheets along with video of prisoners in a jail yard.

Matt Dennis, President of the New Orleans bail Agent Coalition, is the following talking head on screen. He asks, suggestively, whether a defendant’s $200 bail “incentivized him to laugh at the criminal-justice system in New Orleans.” The implication here is that the sum is too low to motivate the defendant to return to court—unlikely, in a city where 85 percent of defendants are poor enough to qualify for a public defender.

The episode ends with Perlstein sitting at a desk littered with case files, declaring that WWL’s research “uncovered dozens of individual cases” that led their legal analyst to conclude that the “new [bail-reform] mandate by the court is not being accomplished safely and appropriately.” It’s no surprise that Danny Engelberg, a public defender in the city, says the segments use tactics reminiscent of “a Willie Horton playbook.”

Another episode takes aim not just at lawmakers working towards reform but also at community organizers bailing out their neighbors by creating special bail funds. The video is once again peppered with mugshots, as Perlstein tells viewers about a man arrested for armed robbery and another accused of rape, both bailed out by one such fund. Perlstein then asks New Orleans District Attorney Leon Canizzarro: “Is this [bail fund] a true ‘get out of jail free’ card?” The DA replies, “Absolutely.” Next, an attorney for the Police Association calls the fund “contradictory to common sense and public safety.”

WWLA’s fearmongering reporting disturbs reformers like Bunton, the chief public defender, who says he worries that “highlighting the one seemingly bad case is going to make decision-makers change course or lose courage.” In the weeks immediately following the Bail Out series, Bunton said, the public defender’s office saw fewer people released without any bail, while bonds themselves went up.

He was likewise disturbed by the reporting’s implication that “there’s something nefarious about community coming together and helping their neighbors when it relates to getting out of jail.” Cannizzaro’s comment to the local Fox affiliate that the bail fund is “playing a dangerous game with public safety” raised the specters of “elitism and racism,” he notes, adding, “he doesn’t say the wealthy parents of someone charged with something are playing a dangerous game with public safety.”

Bail Out was a popular series: It ran on New Orleans’s second-highest-rated television news station, and aired during prime time in September and October. According to November 2018 Nielsen data, WWLTV reached over 43,000 homes in the New Orleans area during its 6 pm news hour. Its appeal hinges on a reverence for law enforcement long embedded in American society. According to a 2015 study, crime dramas are among the American TV viewing public’s favorite shows, and 40 percent of Americans consider cop dramas realistic portrayals of police work. So when shows like Criminal Minds, NCIS, and True Detective spin tales of hardworking investigators putting sociopathic serial killers behind bars, they help derail progressive efforts to reform our criminal-justice system. By casting bail reform as the undoing of police’s hardworking efforts, the series draws on cop-show motifs to sway public opinion against reform.

While the network has not announced more segments, its coverage of bail reform consistently returns to the notion that lower bails cause what’s known as “revolving-door syndrome” in the parish jail, or a cycle of people coming in and out and in again. Just this month, the network aired a segment featuring District Attorney Canizzarro warning that banning money bail in juvenile court has led to a revolving door spinning at “cartoonish speed.”

Bunton says the series attempts to “draw systemic conclusions from one individual case with no contextual data.” But the obsession with anecdotal evidence actually reveals a dearth of scientific proof that bail reforms increase crime. “If you are going to show that something is failing, you should be trying to show that it’s failing empirically,” Bunton said.

In fact, data show that the city’s overall violent-crime rate dropped this year. In fact, a mayor’s report released this fall showed that the city was able to increase the rate of pretrial release for low-risk defendants by almost 50 percent with no simultaneous increase in violent crime. Unlike the imaginary city riddled with freshly released offenders on crime sprees evoked by WWLA’s reporting, New Orleans in the era of reform is characterized by its lowest murder rate in over 40 years and an overall drop in violent crime, along with far fewer people locked up before being convicted of any crime.

Besides, cities across America have implemented radical bail reform without seeing negative effects on public safety. In Washington, DC, where cash bail is effectively outlawed, 98 percent of defendants are not re-arrested for violent crimes while not detained pretrial, a re-offense rate lower than the national average. In New Jersey, bail reform was correlated with a double-digit decrease in the violent crime rate.

Perlstein, the host, is surprised by the criticism of his show: When asked why his reporting focused on specific inflammatory cases without also drawing on the overall statistics, he said, “That’s news.” He also said that despite the “bulk of positive cases…we did find some problematic cases that would have gone unnoticed and uncovered.”

What he misses is the national fervor for bail reform. This is no longer a local issue—judges in states from California to Texas have struck down money bail, and in the Senate Corey Booker and Sherrod Brown are investigating the bail-bonds industry. It’s clear that Americans will no longer accept a legal system with separate tiers for rich and poor. The reactionary forces in New Orleans politics are not the only people resorting to a Willie Horton playbook, publicizing shocking crimes to incite fear. When Donald Trump tweets videos of undocumented immigrants attacking cops, he too draws on the idealized cop figure in service of maintaining an unjust status quo.