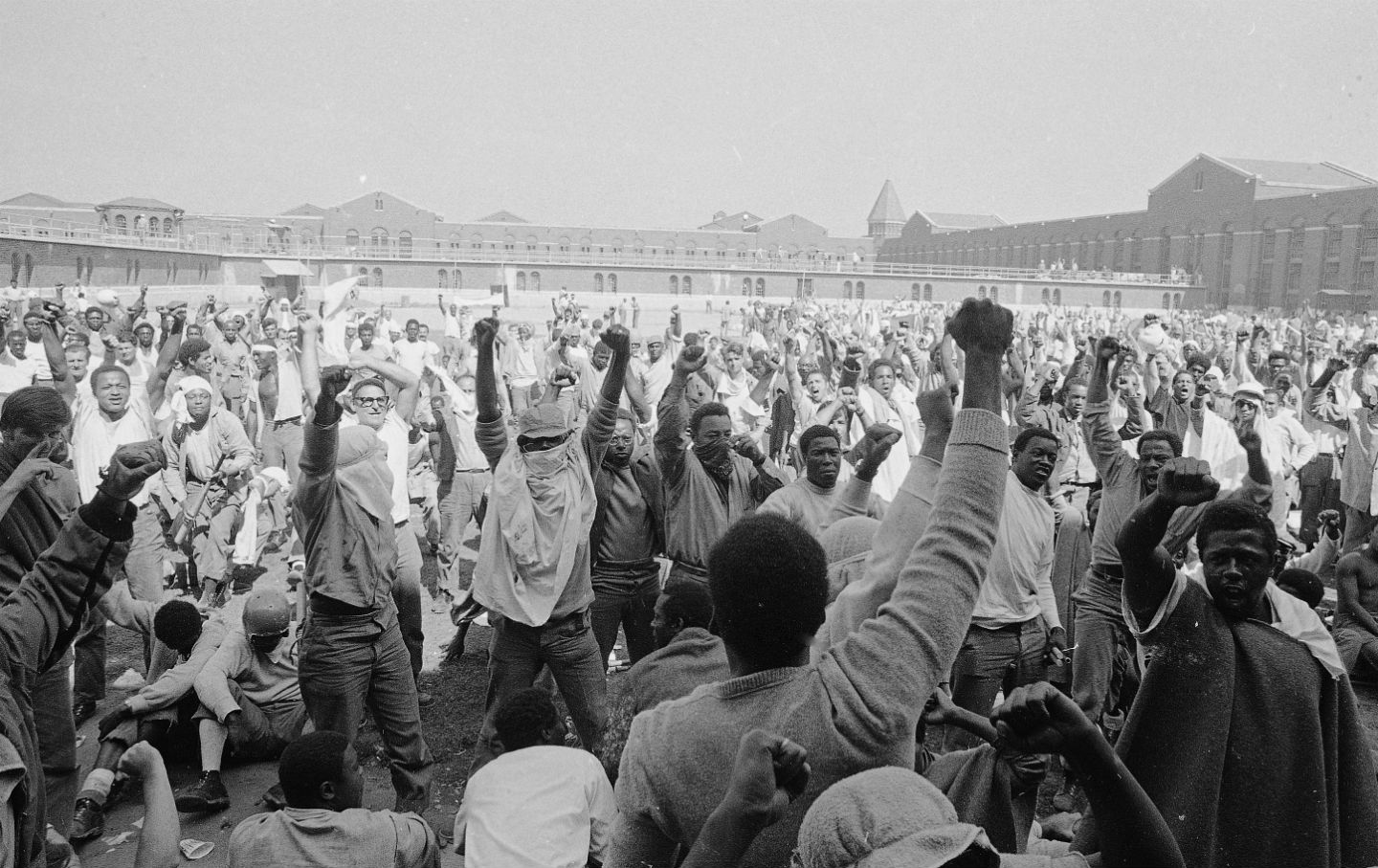 Attica State prison inmates raise their hands in a show of solidarity during the Attica uprising, which took the lives of 43 people. (AP Photo)

Forty years ago, on September 9, 1971, prisoners protesting medieval conditions rebelled at Attica, a maximum-security prison in upstate New York. Four days later the state launched a violent assault on the prisoners that left ten hostages and twenty-nine inmates dead. Both the uprising and its bloody suppression should serve as a warning about our country’s rush towards incarceration and the brutality of our prisons.

For me, the story of Attica is also a story about justice—the importance of fighting for it, especially for disfavored people, even against terrible odds. I began working at the Center for Constitutional Rights two days prior to Attica’s uprising, and within days joined with lawyers from the National Lawyers Guild, who fought to defend the prisoners and hold the state responsible. The justice we sought was sometimes deferred, often denied, and occasionally won over nearly three decades.

From one perspective, we failed. The legitimate complaints of the inmates—their “demands” including such basic human rights as access to adequate food and medical treatment, religious freedom and an end to segregation—remain unfulfilled at Attica and elsewhere. Not a single state official was ever prosecuted for his role in the killing, wounding and beating of Attica’s prisoners during and after the uprising.

From another perspective, we succeeded. Under duress, then-Governor Carey shut down all of the prosecutions of Attica’s inmates for their part in the rebellion, and pardoned those convicted. Though he ignored the recommendations of the commission he had appointed, which included looking at the conduct of state officials, the state ultimately was forced to pay. In a civil damage cases that took twenty-seven years, Elizabeth Fink and other Guild lawyers eventually won a $12 million settlement on behalf of Attica’s inmates.

Our greatest victory may be the establishment of a more accurate historical record. In 1971, the papers were filled with false reports about how the inmates had killed the hostages, slitting their throats and castrating some. The only criminal investigations they were concerned with involved allegations against the inmates, which involved charges ranging from assault to murder, and resulted in sixty-two serious indictments. While the press was evading the real story, I was interviewing inmates in the prison’s hospital ward. My main memory is one of shock—shock at seeing almost crippled black and Latino men lying there recounting stories of near escapes, bullet wounds and the famous gauntlet that many were forced to run —stripped naked—over broken glass while guards beat them with clubs.

Today, “Attica” is synonymous with racism and prisoner abuse. The record now shows that more than 2,200 inmates, 63 percent of whom were black or Latino, were held in a facility meant to hold 1,200 and patrolled by 383 guards, all white. It’s now a given that physical as well as mental abuse and racism were common.

We would do well to heed Attica’s lessons. America’s prison population is now almost ten times larger and still filled with the same people who suffered Attica’s overcrowded, subhuman conditions—mostly low-income black and Latino men. In fact, the United States has the highest incarceration rate in the world—743 per 100,000 as of 2009. That’s about 20 percent higher than any other nation. While Americans represent only 5 percent of the world’s population, one-quarter of the world’s inmates are incarcerated here.

Conditions in US prisons remain far too like the ones that contributed to the uprising at Attica and its brutal suppression. Just this past May, the US Supreme Court deemed conditions in California’s overcrowded prisons bad enough to constitute a violation of the Eighth Amendment’s ban on cruel and unusual punishment. Six weeks later, prisoners in Pelican Bay’s “Security Housing Unit” went on a hunger strike to protest being confined in cement cells with metal doors for more than twenty-two hours a day, with no real access to natural light or human contact.

Forty years ago, Attica forced some unpleasant truths into the spotlight. That most jailors and officials are white, while most incarcerated people and scapegoats are people of color. That institutional power all too often prevails over civil and constitutional rights, especially for the most vulnerable among us. That people stripped of their humanness will eventually rise up. These are lessons we ignore at our peril.