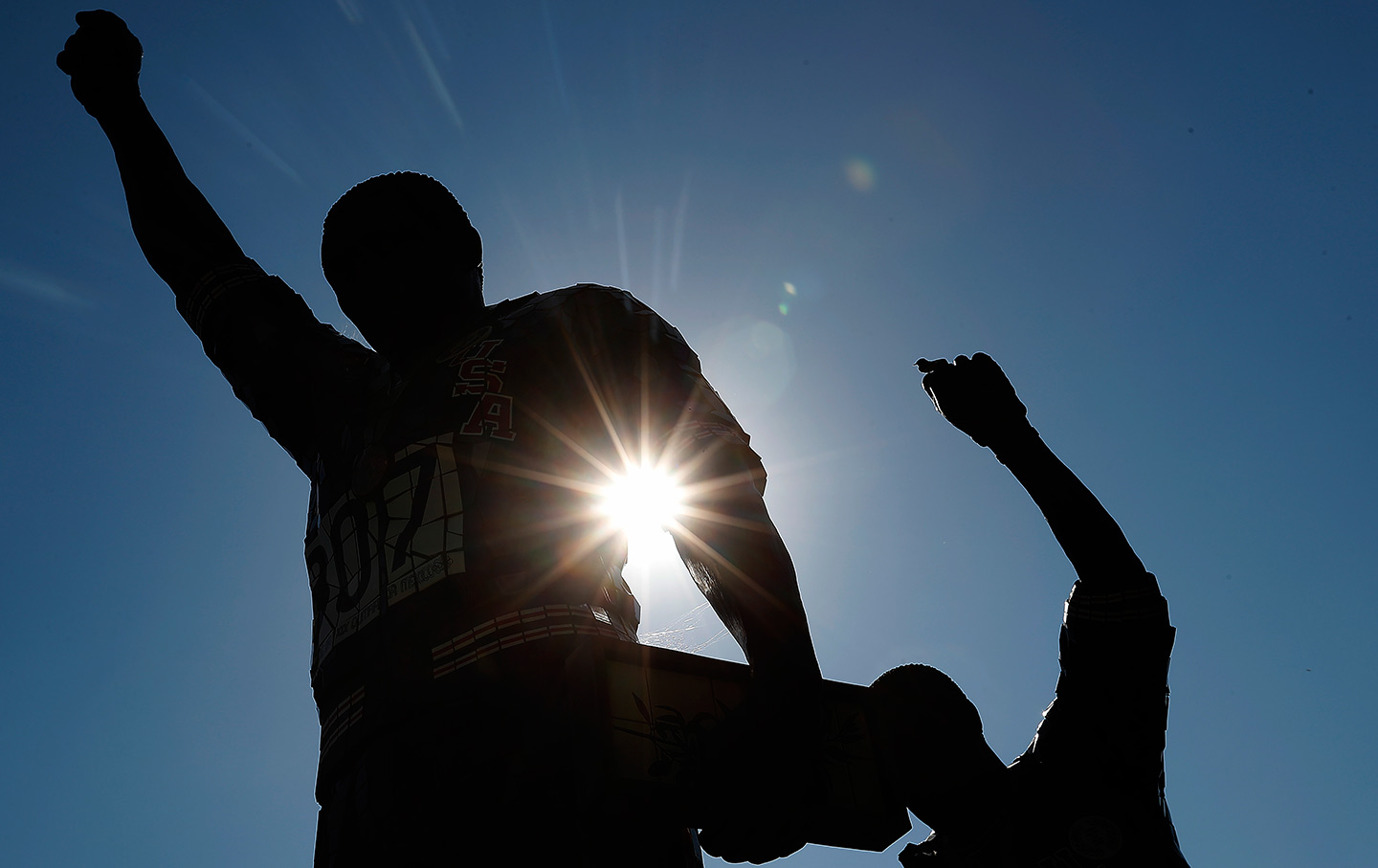 A statue in honor of former Olympians Tommie Smith and John Carlos is seen on the campus of San Jose State University in October 2018. (AP Photo / Tony Avelar)

As the midterm election looms and news of a series of hate crimes floods the airwaves alongside racist campaign ads, a group of athletes, most connected to an organization called Athletes 4 Impact, have put forward a statement calling for solidarity against hate and a push to get out the vote. Most noticeable on this list are the many members of the WNBA, including legends like Sue Bird, Diana Taurasi, and MVP Breanna Stewart. This matters because often when people assess this era of athlete activism, the WNBA is erased from the narrative. For example, it was WNBA players who were protesting police violence in the summer before Colin Kaepernick in 2016. This list should be considered a work in progress. Hopefully more athletes will sign on and use their platform to speak out against neo-Nazis, hate crimes, and the racist politicians who give them sustenance.

We the undersigned Athletes for Impact want to lend our voice to the struggle against the hatred and violence that have escalated around the country over the last week.

The pipe bombs sent to politicians and media members by a President Trump supporter who “saw Trump as his father”; the killings of two African-American grandparents—69-year-old Maurice Stallard and 67-year-old Vickie Jones—in an attack at a Kroger’s in Kentucky by a shooter who said “whites don’t kill whites”; and the massacre at the Tree of Life Synagogue in Pittsburgh all point to a rise of white-supremacist violence.

This violence and division is being further promoted by Trump’s announcement that 15,000 troops will be heading to the southern border to repel families fleeing violence and other legitimate asylum seekers. This outrage is compounded by his recent statement that he intends to issue an executive order to override the 14th Amendment’s declaration of birthright citizenship.

He continues to call the media “the enemy of the people” not days after they were sent bombs and just four months after the killing of five people at the Capital Gazette newspaper.

In another attack on civil rights, the Department of Health and Human Services is spearheading an effort to narrowly define gender as biological under Title IX (the federal civil-rights law that bans gender discrimination in education programs) in an effort to erode the rights of transgender people.

We know that building walls—whether between nations, between ethnicities, or between genders—is an attempt to divide and conquer. We are calling on people to get out the vote on November 6th for candidates who stand against this division. We also call upon people to stand together, publicly and proudly, against hate. As athletes we will use our platform to defend the most vulnerable in our society. An injury to one is an injury to all.

Dr. Harry Edwards – Institute for the Study of Sport, Society and Social Change

Dave Meggyesy—former NFL linebacker, author of Out of Their League