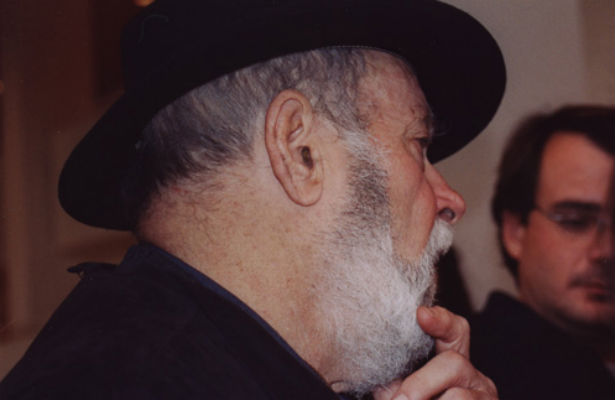 Arthur once told me that as a teenager he was much sought after as a batter in pickup baseball games. Being monocular, he explained, he saw the ball better… or differently from others. If you are looking for a convenient metaphor to explain Arthur Danto’s success when he took time out from a distinguished career in philosophy to review the passing art scene for The Nation, that’s as good a one as any.

Arthur, who died on October 25 at 89, saw art, especially contemporary art, with different eyes, which is why I happened to phone him with, in his words, the “reckless suggestion” that he join us in these pages. Sometime in early 1984 Ben Sonnenberg had shown me a note in which Arthur made the following observation: “My sense is,” he wrote, “that Julian Schnabel was not the next thing that was supposed to happen in the history of art.” A funny line, to be sure, and one that struck someone like me, who had been force-fed Schnabel, as tremendously healthy.

Ben thought I should hold off a little and try out a poet we both admired as the magazine’s art critic, but I wanted the fellow who wrote that sentence, whoever he was… and I really did not know who he was, though my husband pointed out that his book on Sartre had been on our shelves for years.

As it turned out, of course, the Schnabel observation was not a one-off but a considered part of what would become After the End of Art, where the critic and philosopher in Arthur Danto came together. But in the meantime, there were the Nation articles, and they poured forth in all their joyful, brilliant and astonishing plenitude. Almost at once, it was clear that something momentous was happening in our pages. We began riffing on the flow of brilliance from that apartment on the Upper West Side we called the Dantotorium, and on the individual who produced them, Danto Alighieri, Arturo C. Dant and so on. It was a giddy moment. The mail poured in. The art world stood at attention.

But the Danto phenomenon was more than an art world event. Arthur wrote for everyone, talked down to no one and reached people who did not know they were interested in art. He became a critic just when art was becoming critic-proof, a turn of events that would send a Hilton Kramer or a Robert Hughes, both of whom had theories of art against which everything had to be measured, into a kind of psycho/cultural free fall. Nothing they said mattered anymore; the artists they despised who were promoted by Charles Saatchi or Mary Boone marched on; and Arthur Danto moved into the fray like a pilgrim with a beatific sense of wonder—that and a longstanding curiosity about the shape of things to come in the history of art.

He made it look easy and he made it matter. His negative pieces (on MoMA’s “Primitivism” show or the Whitney Biennials, for instance) were fewer than the others, and all the more crushing for that. What impresses me almost thirty years after his first review (of “Blam!” at the Whitney Museum) is the freshness of it all. At one point early on, he sent in a review of our contemporary, the painter Jennifer Bartlett. I mention this because despite its virtues it was not one of his masterpieces, and yet it did something well that others did not even attempt. In it Arthur follows groups of schoolchildren whose “minds [are] untouched by the art world” through the exhibition, listening to their teachers tell them to create their own version of a Bartlett work but not to look at one another’s work as they did so. Reflecting that Bartlett herself has “peeked over every shoulder in the history of art,” he then suggests how children might be better led to look at the themes and variations of Bartlett’s work as a series of styles that add up to one style. You might not end up liking Bartlett’s art any better—and Arthur did not expect you would—but you saw it for what it was without the art world mishegoss.

(A month later, he was illuminating the work of the eighteenth-century artist François Boucher, creator of those innocent scenes of fluffy lambs and rosy shepherdesses that so pleased the court of Louis XV—“as dissolute, cynical and opportunist an elite as the world has ever known.” In three or four lines, Arthur describes the extraordinary brushwork of Watteau, Fragonard and Boucher in a way that puts reams of art historical commentary to shame.)

But it is the child’s point of view that I come back to, because its openness served Arthur well—sometimes to hilarious effect, as in his 1999 review of the hugely controversial “Sensation” show at the Brooklyn Museum, which the then-mayor, Rudolph Giuliani, attacked and threatened to defund, calling one painting in the show, Chris Ofili’s The Holy Virgin Mary, “disgusting.” Arthur begins by proposing that the museum turn away anyone older than 17 unless accompanied by a very young child. He then moves back and forth between the observations of those of us who carry the burden of art history and the child who does not and will, for instance, look at another of Ofili’s paintings in the show, Afrobluff, and recognize that there are lumps of shit attached to its surface. “You will explain that it is elephant dung, adding a word to the child’s vocabulary and powers of connoisseurship…. The child will find this comical.” And so forth, until our stale categories collapse and the exhibition’s pleasures and its reflections on art, successful and not, stand on their own. It is an exuberant and generous performance.

If Walter Benjamin insisted that, in an age of mechanical reproduction, art had lost its aura, Arthur Danto restored that aura; he enchanted an unenchanted world.

Read Arthur Danto‘s essay on Jean-Michel Basquiat from a 2005 issue of The Nation.