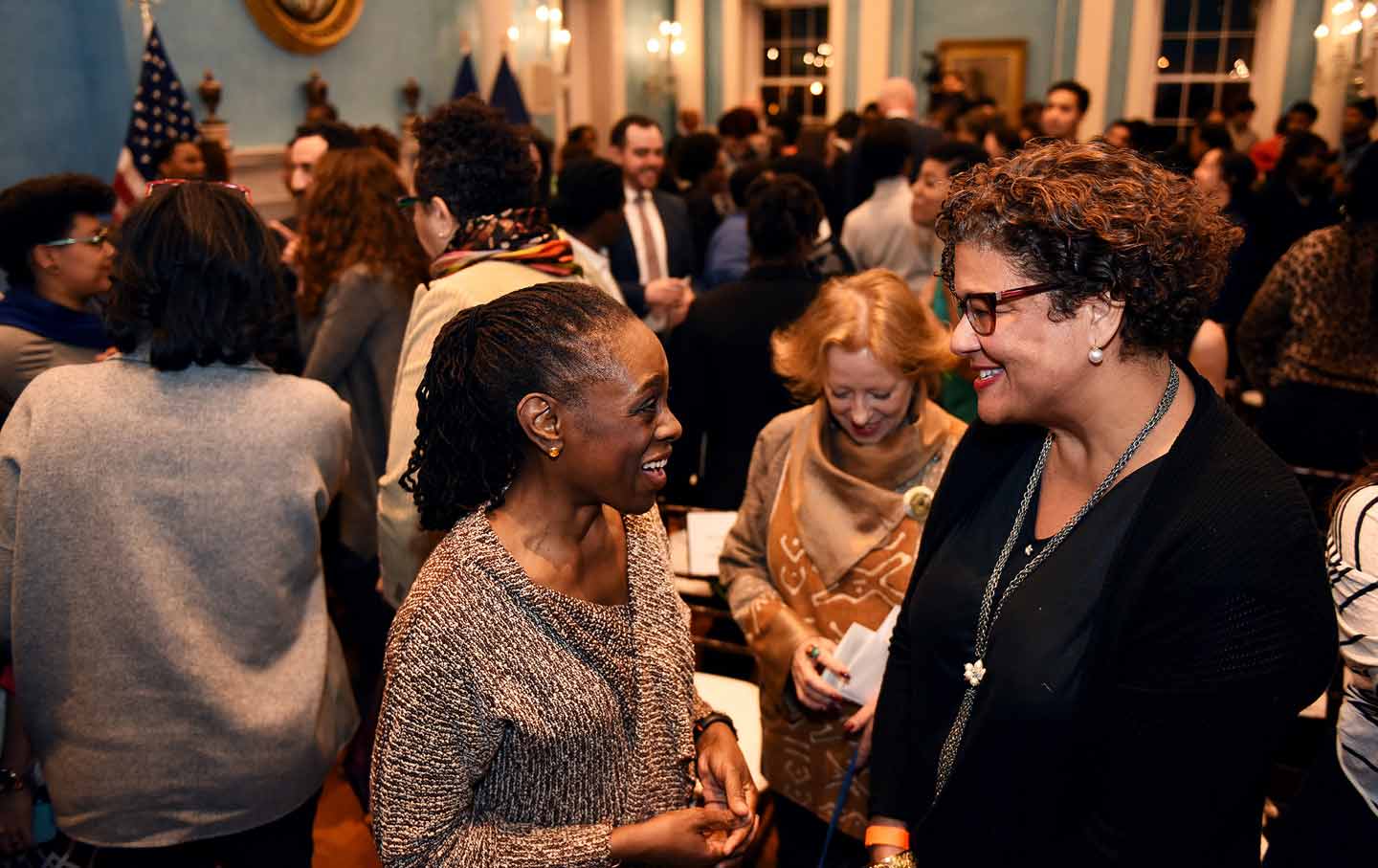 Long before Chirlane McCray became the first lady of New York City, she was a poet. She wrote what she has described as “angry” poetry that allowed her to use the art as a way to explore her African-American history. On Monday night, she hosted a group of artists and thinkers—Robin Coste Lewis, Daveed Diggs, Alicia Graf Mack, Christopher Myers, and Jeanne Theoharis—at Gracie Mansion for “Reimaging Black History through Art, African American History and the Fierce Urgency of Now.” The Black History Month panel discussion focused largely on the ways that contemporary black artists employ their personal histories in service of their work.

Standing in the big, sky-blue ballroom of what she called “the people’s house” on East 88th Street, she said, “Every which way we turn today, African-American artists are putting their own stamp on history.” The first lady then cited, as examples, Beyoncé’s Black Panther–evoking Super Bowl 50 halftime performance and rapper Kendrick Lamar’s appearance at the 2016 Grammy Awards, in which he walked on stage shackled in chains. A few in the room—filled with artists, students, museum directors, and government officials—let out “woo”s as signs of their agreement with McCray. Before handing the microphone to Alondra Nelson, the Pulitzer Prize–winning journalist and professor who was the evening’s moderator, the first lady, who had her thin, tightly braided locks pulled back into a ponytail and was wearing a belted dress with a loosely ruffled collar, invited the guests “to take a look around” after the program. Lining the stately interior of Gracie Mansion is the exhibition “Windows on the City: Looking Out at Gracie’s New York.” The show features 49 new works selected by McCray and curator Kalia Brooks—a portrait of Frederick Douglass and the original draft of New York State’s emancipation proclamation, for example—that chronicles New York City during the 18th and 19th centuries.

Nelson, who sported a cropped Afro and black pantsuit, began the panel discussion by asking, “How have you reimagined black history in your work?” The actor and rapper Daveed Diggs, who plays President Thomas Jefferson in the musical Hamilton, said, “My work in Hamilton accentuated the theme that we are creating history all the time.” Nelson followed up by asking the ballet dancer Alicia Graf Mack, “Is there history in motion?” Mack said, “Yes,” and told of how her black heritage informed her roles as a lead dancer at Alvin Ailey American Dance Theater. The children’s book illustrator Christopher Myers said his books aim to “change our sense of what history is.” Jeanne Theoharis, speaking of the way in which she presented a radical retelling of Rosa Parks’s life in her recent book The Rebellious Life of Mrs. Rosa Parks, said the book is “a story that speaks to us today. What I was trying to do was trouble the ways the fables of the civil-rights movement have paradoxically made the movement unavailable to us today.”

For nearly an hour the panelists labored over how their work collectively represents new narratives that can be used to access history in ways that recast it and provide lessons for the present. Then Nelson turned to the audience for questions. “Can you imagine a time that we won’t need Black History Month?” an older white woman asked. The audience exchanged astounded glances. Some exhaled nervous laughs, and light chatter filled the room. “I can imagine a time, but I don’t know why we wouldn’t want to have a time when we don’t celebrate black history,” the writer Robin Coste Lewis said.

The moment represented both the trouble with and triumph of Black History Month.

What began in 1926 as Negro History Week, initiated by the historian Carter G. Woodson as a celebration of black accomplishment, evolved by the late 1970s into a much-needed month-long national conversation about race. Today Black History Month both honors and chastises America by prompting short furious conversations about past progress and persistent barriers—conversations that often don’t continue throughout the year.

“It should be every day,” the woman in the audience shot back. “It should be every day,” Lewis carefully repeated the woman’s statement. “I didn’t mean to be oppositional. I recognize the generosity at the heart of your question, but with that generosity we should be striving for much more.” The exchange affirmed the first lady’s opening statement: “Everyone in this room today has a role to play in making black history a living, breathing part of our everyday lives.”

Earlier in the night, Lewis, whose Voyage of the Stable Venus (winner of the 2015 National Book Award) traces the history of the black female figure, and its misrepresentations, in Western art from 3800 BC to the present, said that, before she sold her book, she “just wanted to e-mail it to all the women in the world.” “For them to just have it in their phones,” she added. (“It’s a dark book… dark and lovely,” she joked.) Dropping her voice so that it felt familiar, Lewis recited the hypothetical e-mail she would send: “Hey, girl, if you aren’t feeling so tight, it might have to do with the fact that this has been going on since 3800 BC. Don’t believe the hype! I hope in some ways that it helps us stop carrying these horrible burdens that really have nothing to do with us.”