President Donald Trump has deployed 5,600 active-duty US troops to the border with Mexico as part of the mission formerly known as Operation Faithful Patriot. According to leaked documents received by The Nation, the Army will provide Customs and Border Protection officers with anti-riot weapons and protective equipment, further blurring the line between military and civilian law enforcement.

“With the Army directly supplying law enforcement with military equipment, the line is gone” said Ramon Mejia, an Iraq War veteran, whose father immigrated to the United States from Mexico. “They’re creating a war atmosphere. It’s dehumanizing towards specific groups on the border, and it’s an extremely dangerous precedent to set.” Meija added that the gear will likely remain at the border and contribute to the militarization of border policing: “There’s been this increasing military-style occupation of these border communities by law enforcement already.”

The equipment includes riot shields, tactical shin guards, three-foot extendable batons, and an assortment of “less-lethal” ammunition. Private companies—Aardvark Tactical and Safariland LLC—produced the items, many of which have been used to violently put down political demonstrations across the United States. The Army is also “on notice” to have private contractors build personnel camps for its soldiers. Those contractors—DynCorp International, Fluor Corporation, and the former Halliburton-subsidiary KBR—are all plagued by scandal. DynCorp’s role in training new Afghan and Iraqi police has been littered with corruption, fraud, and the sexual abuse of Afghan children. Since 1995, Fluor has been forced to pay more than $200 million in penalties for 40 instances of misconduct ranging from fraud to anti-union activities. And KBR is notorious for its “sweetheart” contracts in Iraq, given that then–Vice President Dick Cheney was a former Halliburton CEO.

According to the internal Army records, the equipment will come through Biggs Army Airfield at Fort Bliss in El Paso, Texas, before being distributed to CBP officers. The base is one of 13 destination points for the deployment, which currently consists of 2,800 troops in Texas, 1,500 in Arizona, and 1,300 in California. Though troops will be working along the border throughout their deployment, most are stationed on bases near population centers like El Paso and San Diego. An estimate of the deployment’s final price tag is not available, but Defense Department officials have said they’re afraid the costs could exceed $200 million.

Captain William Speaks, a Defense Department public-affairs officer, said that the troops will put up barricades and fencing, provide aerial-transport and emergency-medical support, help the CBP with reconnaissance, and construct temporary camps for CBP officers. The Army has already begun building a forward-operating base outside Donna, Texas, to hold at least 300 troops, and soldiers have been photographed stretching barbed wire along the banks of the Rio Grande. 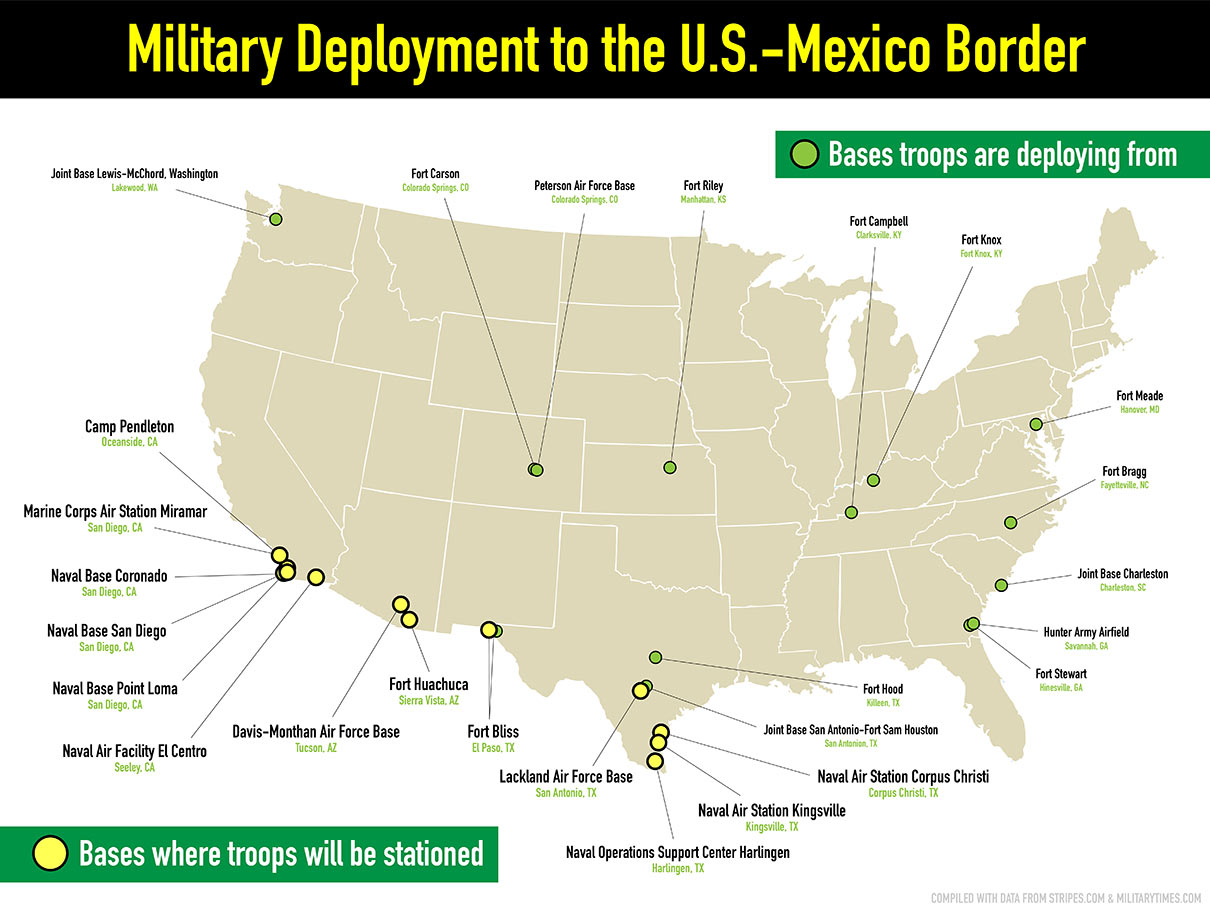 The documents obtained by The Nation frame aspects of the deployment as “terrain denial” operations, a counter-insurgency combat doctrine that US soldiers employed in Iraq. Terrain denial relies on both lethal and nonlethal obstructions—barricades and fencing but also minefields—to deter enemies. While land mines won’t be buried in the desert, placing soldiers along the border with combat-derived objectives encourages members of the military and law-enforcement agencies to view asylum seekers as an enemy threat.

The Defense Department stressed, however, that the Army will not be confronting immigrants at the border. “The missions currently approved by Secretary Mattis do not involve direct participation by military personnel in civilian law-enforcement activities,” Speaks said.

And that makes sense, because the law forbids it. The Army and Air Force are limited by the Posse Comitatus Act, which stipulates that they cannot engage in law-enforcement activities on US soil. While the Navy is not bound by this, its regulations place the same restrictions on its members, including the Marines.

Clearly the deployment of active-duty troops is more about political theater than it is security. For starters, Border Patrol and CBP personnel are already armed with military-grade weapons, vehicles, safety gear, and tactical equipment. Second, there are over 2,000 National Guard troops on the southern border. Third, the active-duty US military actually has less jurisdiction inside the US than the National Guard. The Army National Guard and Air National Guard are not bound by Posse Comitatus if they are acting under the jurisdiction of the governor of the state to which they belong and are acting within its boundaries.

Why then is Trump sending troops with less jurisdiction to the border? The Pentagon claims it’s because of “capabilities,” meaning they selected forces that were deployment ready and equipped with the tools needed to meet the demands issued to them by the president. But when that demand consists mostly of stretching barbed-wire across empty fields and waiting around for exhausted families to present themselves for asylum, it seems strange that the National Guard would be incapable of the task.

There is, of course, a simpler explanation. To deploy the National Guard, Trump needs approval from the governors of each state being asked to provide troops. In sending the active-duty military, he can act on his own, avoiding the spectacle of being rebuffed by both Democratic and Republican governors as happened when his proposed 4,000 troop deployment in April was squeezed down to just over 2,000.

The strategic pointlessness of the deployment makes clear that the president is using the military as a political tool to stir up his anti-immigrant base. And the end result will have the hallmarks of so many of our recent law-enforcement policies: profits for private contractors and the further militarization of civilian life.