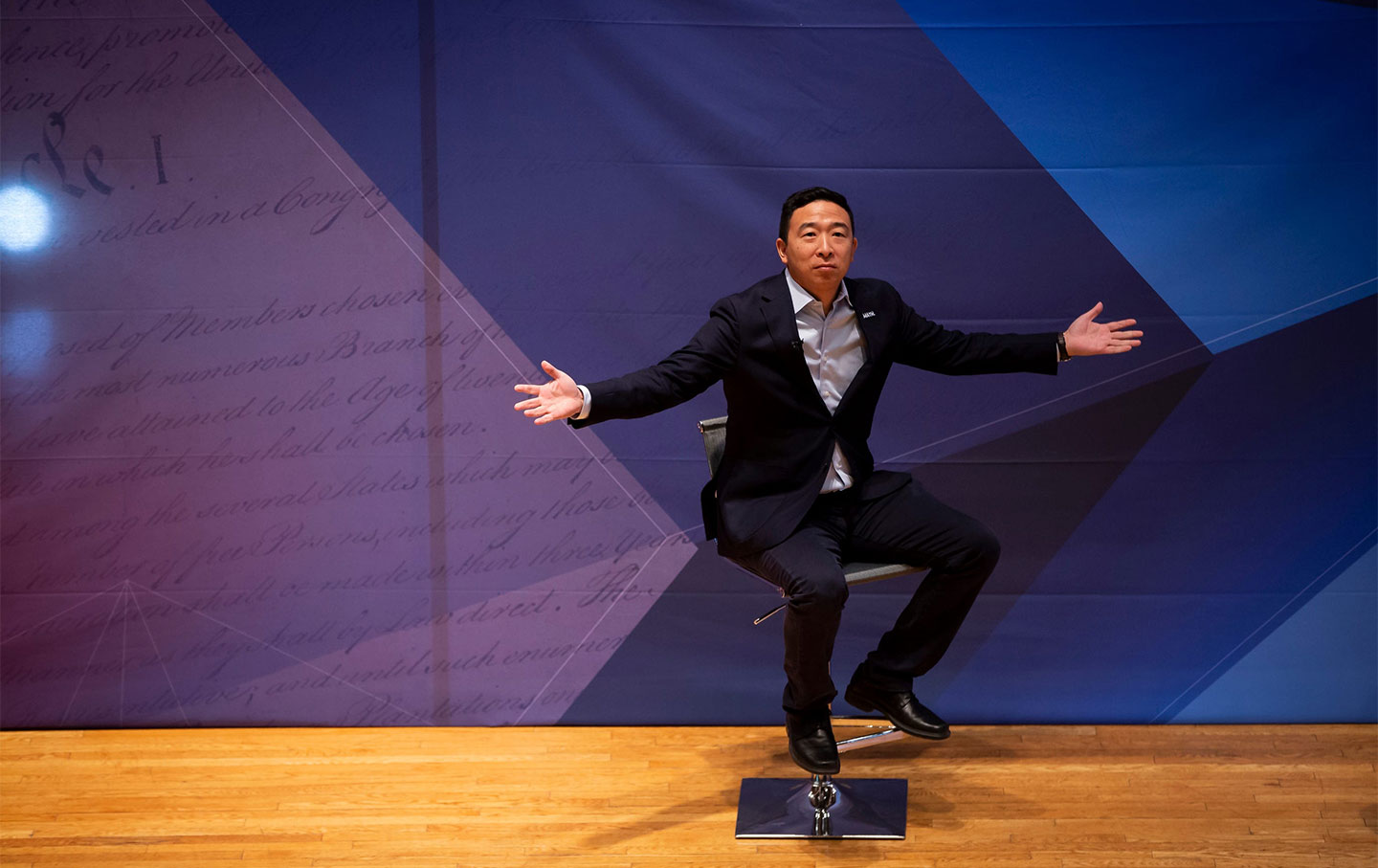 The most striking moment so far in Andrew Yang’s unlikely yet resilient presidential bid came in the fourth Democratic debate, when someone else was asked about Yang’s signature issue. Addressing Elizabeth Warren, moderator Erin Burnett said, “You wrote that blaming job loss on automation is ‘a good story, except it’s not really true.’ So should workers here in Ohio not be worried about losing their jobs to automation?” The candidate’s response was a slurry of “by golly,” “gee,” and “I have a plan to fix that” sloganeering that focused on legitimate concerns about trade policy as it has affected industrial workers but never got around to answering the question. Warren wasn’t wrong to criticize the “giant multinational corporations who’ve been calling the shots on trade.” It’s just that she seemed to be giving a 1993 answer to a question about 2023.

That gave Yang a narrow opening to plead with his fellow Democrats to start thinking about the future. “Senator Warren,” he said, “I’ve been talking to Americans around the country about automation. And they’re smart. They see what’s happening around them. Their Main Street stores are closing. They see a self-serve kiosk in every McDonald’s, every grocery store, every CVS. Driving a truck is the most common job in 29 states, including this one—3.5 million truck drivers in this country. And my friends in California are piloting self-driving trucks. What is that going to mean for the 3.5 million truckers or the 7 million Americans who work in truck stops, motels, and diners that rely upon the truckers getting out and having a meal? Saying this is a rules problem is ignoring the reality that Americans see around us every single day.”

“So I understand that what we’re all looking for is how we strengthen America’s middle class,” replied Warren, who then explained her “plan to extend the solvency of Social Security.” She never got to the automation question, except to say, “I want to understand the data on this.” That should have put the spotlight back on Yang, a 44-year-old entrepreneur who can point to so many studies on how automation already has displaced workers and will continue to do so that his campaign slogan is “MATH.” Instead, following the common practice of 2020 Democratic debate hosts, Burnett shut the conversation down just as it got interesting.

When I asked Yang a few weeks later about the exchange with Warren, he said, “That was surprising to me, given that she is one of the better, I believe, thinkers in the Democratic Party on many of these types of issues.” The moment when the themes of his campaign finally hit the national stage was “very edifying and a little bit disappointing, frankly,” he admitted. A first-time candidate running what’s been described as a pirate ship campaign, Yang worries that “our political process is not really well designed for us to get into the weeds on what the data look like in automation and many other subject areas.”

As someone who has written a great deal about the future of work, and about how automation influences politics, I share his frustration. Like Yang, I believe Donald Trump’s reactionary politics fills a void created by the Democrats’ failure to wrestle with next-economy issues. Yet I don’t believe Yang is wrestling with those issues as ably as tech-savvy members of Congress, like Representative Ro Khanna, or progressive leaders in the UK and Germany.

What worries me is that Yang’s gimmicky campaign—in the third Democratic debate, he announced a scheme to select 10 families at random and give each of them $1,000 a month over the course of a year to illustrate his flagship universal basic income (UBI) proposal—is better at identifying problems than solving them. When I put this concern to him, he pushed back, arguing that his approach is showing results. He’s been on the cover of Newsweek. Polls put him in the middle of a crowded pack (and closer to the top among young voters), even if he’s far behind the candidate he said he favored in 2016, Bernie Sanders. Yang raised $10 million in the last quarter, enough to staff up and launch a slick $1 million ad buy in Iowa, with commercials produced by the same consultants who aided Sanders in 2016. “Andrew Yang’s campaign,” declares The Week, “has gone mainstream.”

But is Yang ready for prime time? He has staked his campaign on an old idea—providing every adult American with that $1,000-per-month “Freedom Dividend”—that would cost a lot ($2.8 trillion each year, according to the Tax Foundation) and would be offset by a potentially regressive value-added tax on consumption, a commendable financial transactions tax, and the hope that giving away money would stimulate economic growth. Great progressive thinkers like the late Erik Olin Wright have long argued for UBI as a response to automation-related displacement, but so, too, have government-hating libertarians. Yang identifies himself as a progressive and said he favors “human-centered capitalism.” But his plan sounds a little libertarian when his campaign website explains his UBI proposal this way: “Current welfare and social program beneficiaries would be given a choice between their current benefits or $1,000 cash unconditionally—most would prefer cash with no restriction.” I asked Yang about the progressive-versus-libertarian debate. “We can do a best-of-both-worlds approach,” he replied. “I’m certainly not one of these ultraconservative types who wants to dismantle every social program on the books. I think that we need to lay a foundation in the form of those dividends and then see what the additional problems are and try to solve those as well.”

That’s too vague and unsettling for those of us who believe that if UBI is tried in a big way, it must be associated with a muscular social welfare state. Also worrisome is the Yang campaign’s argument that the Freedom Dividend “fits seamlessly into capitalism” and can “support and preserve a robust consumer economy.” I’m not sure that’s a worthy goal, but I am sure that this response to automation is too casual and ill-defined.

Yang has earned his moment. I agree with author Martin Ford when he says, “Andrew Yang, and his warnings about the impact of AI and automation, should be taken seriously.” But Yang still hasn’t quite reached the solutions stage of the debate.