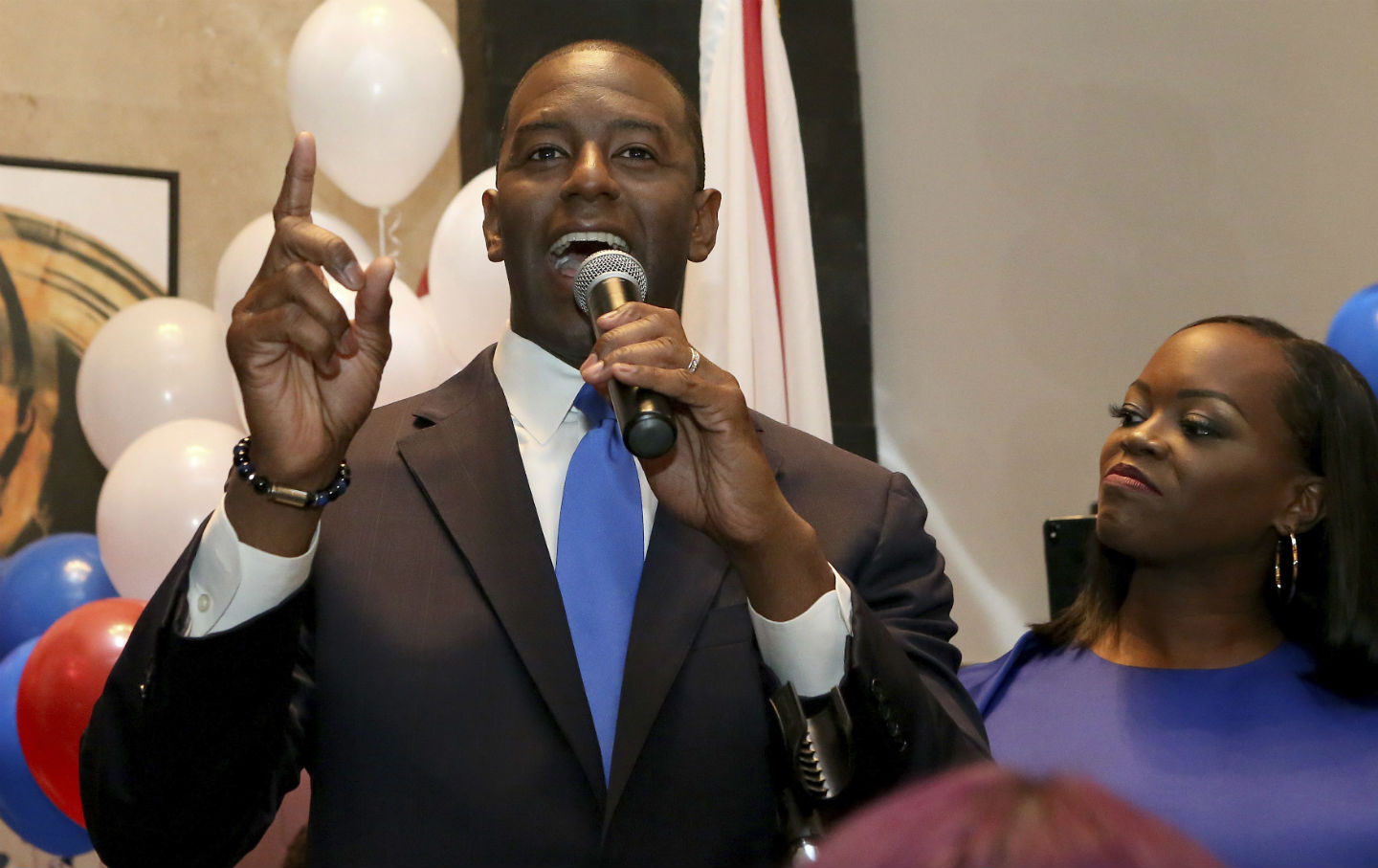 Andrew Gillum won Florida’s Democratic gubernatorial nomination on Tuesday with a remarkable grassroots campaign that highlighted his record as the bold young mayor of Tallahassee who “developed a thriving innovation economy, beat the gun lobby in court to protect common-sense reform and stood up to President Trump and Governor Rick Scott to defend immigrants.”

Gillum welcomed the support of Color of Change, Indivisible, Democracy for America, Our Revolution, the Working Families Party, the Progressive Change Campaign Committee, Women’s March Florida, National Nurses Union, NextGen America, the Florida Immigrant Coalition, and other local, state, and national progressive groups. The candidate, who marched with Parkland students and rallied for gun safety, celebrated the fact that he was a “Moms Demand Action Gun Sense Candidate of Distinction.” A leading figure among young elected officials nationally who was reportedly considered by the Hillary Clinton camp as a 2016 vice presidential prospect, he proudly campaigned with Vermont Senator Bernie Sanders at his side.

Gillum claimed his victory—a major upset in which he beat a former congresswoman with a big name in Florida politics, Gwen Graham, and a former mayor of Miami Beach with a big-spending campaign, Philip Levine—by telling a multiracial crowd of working-class backers: “I want you to know that this thing is not about me. This race is about every single one of us. Those of us inside this room. Those outside of this room. Those who voted for me. Those who didn’t vote at all. And those who didn’t vote for me because they are Republicans. But I want to be their governor, too.”

With Gillum as their nominee, Florida Democrats will offer a clear vision for a progressive future that rejects the crudely divisive politics of Trump and Trumpism.

What of Florida Republicans?

They will be offering voters that politics of Trump and Trumpism—on steroids.

The GOP nominee for governor, Ron DeSantis, waged a primary campaign that highlighted his lockstep support for Trump as a member of the US House of Representatives. He constantly reminded voters that “Ron DeSantis is fully endorsed by President Donald Trump!” His front page of his campaign’s website was festooned with multiple images of Trump—as was his final campaign ad.

DeSantis claimed his victory by chirping: “Thank you, Mr. President.”

In case anyone doubted his full embrace of Trumpism, DeSantis went on Fox News Wednesday morning and attacked Gillum, who would be Florida’s first African-American governor, by saying: “The last thing we need to do is to monkey this up by trying to embrace a socialist agenda with huge tax increases and bankrupting the state.”

Florida Democratic Party chair Terrie Rizzo accused DeSantis of “launching his general election campaign with racist dog whistles.” And Trump, who was already attacking Gillum on Twitter Wednesday morning, will be all-in for an ugly race.

Florida voters now face one of the starkest choices of a 2018 election season that will see plenty of stark choices in plenty of states.

Progressives believe that clarity will energize voters who are not just upset with Trump but who are ready for a new politics. On Tuesday night, they celebrated Gillum’s win as they have previous primary victories this year by African-American gubernatorial contenders—including Maryland’s Ben Jealous and Georgia’s Stacey Abrams—by hailing the emergence of what Democracy for America Executive Director Charles Chamberlain describes as “the New American Majority of people of color and progressive white voters [who] are ready to deliver transformative results for candidates who share their commitment to bold, inclusive populism.”

“Tonight,” said Chamberlain, “Floridians made it clear that the time for fundamental progressive change in the Sunshine State is here. Andrew Gillum has built an unprecedented movement for change in Florida and it’s hard to imagine a candidate better equipped to defeat a Trump sycophant like Ron DeSantis this November.”

Joe Dinkins of the Working Families Party noted that Gillum scored his primary upset win over better-known and better-funded Democrats by running as “an unapologetic progressive who supports criminal justice reform, Medicare for All, a $15 minimum wage, and more.” In the Florida win, Dinkins saw an indication that another WFP-backed candidate, Cynthia Nixon, can upset New York Governor Andrew Cuomo in that state’s September 13 Democratic primary. Nixon agreed, tweeting that “Andrew Gillum just won his primary for governor of Florida! Experts said it was impossible. The polls had him at just 16 percent. We’re proving, that if progressives come together, we can win. Now, it is New York’s turn.”

No one imagines that Gillum will have an easy time of it in Florida, a politically volatile battleground state where Republicans won the 2010 and 2014 gubernatorial races. He will be running against DeSantis and the NRA and billionaires who are prepared to write huge checks in order to maintain the Republican advantage in the nation’s statehouses. He will also be running against Donald Trump, whose over-the-top enthusiasm for his Florida acolyte was on display Tuesday night, as the president tweeted: “Such a fantastic win for Ron DeSantis and the people of the Great State of Florida. Ron will be a fantastic Governor. On to November!”

But Bernie Sanders, who endorsed Gillum at a point when the mayor was far behind in the polls, and who then barnstormed across the state with the candidate, thinks the Democratic nominee has something that’s more important than Trump’s backing: people power.

“What has made Andrew’s campaign so powerful is that he’s not just working hard to win an election, he has laid out a vision for a new course for the state of Florida and our country,” Sanders said Tuesday night. “No one person can take on the economic and political elites on their own. Tonight, Floridians joined Andrew in standing up and demanding change in their community. That’s what the political revolution is all about and Andrew Gillum is helping to lead it.”