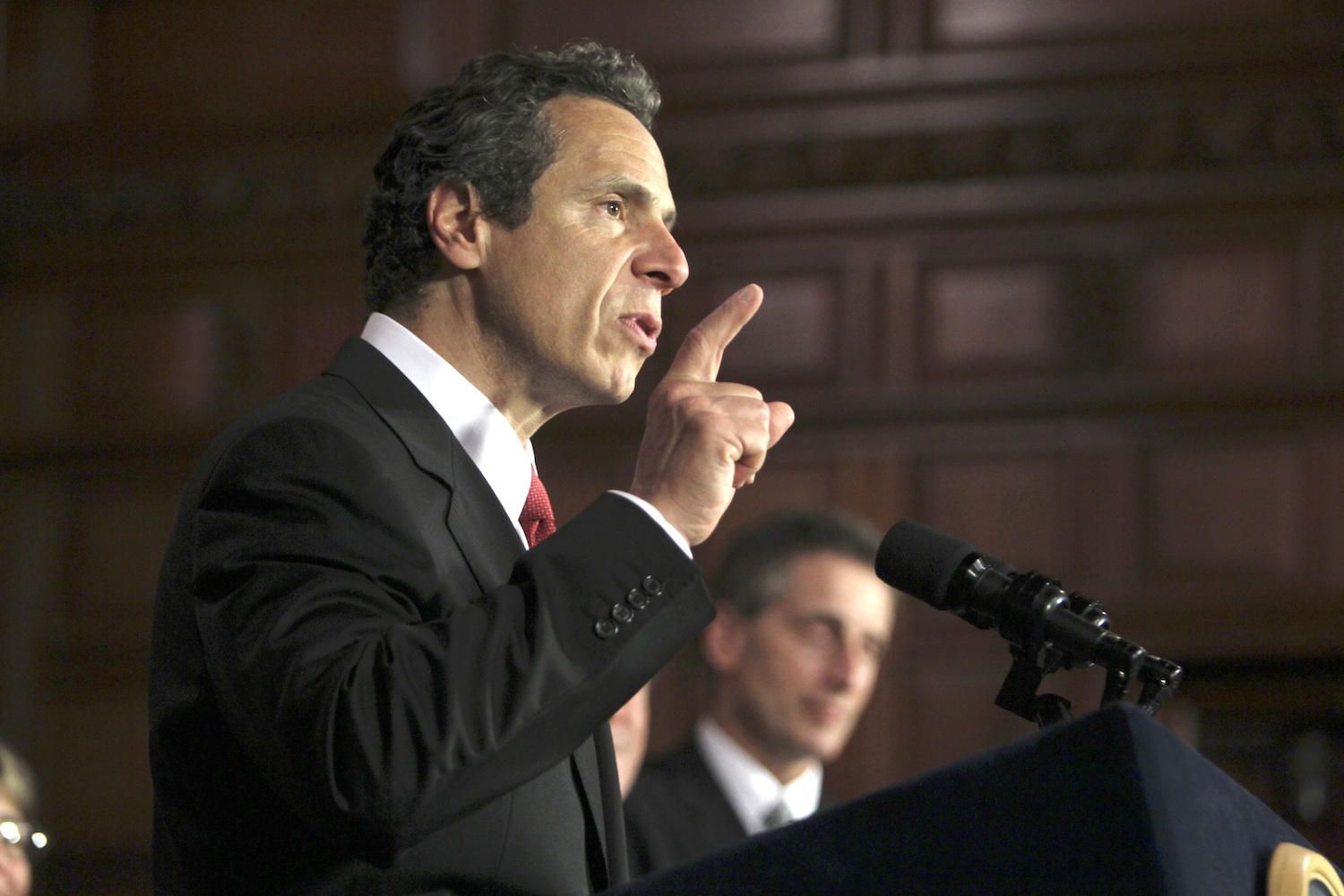 According to the website of New York’s nascent Women’s Equality Party, the organization was “[i]nspired by the spirit of Seneca Falls and those who came before us” and “brings together the strength of New York’s women leaders to help elect candidates who support the issues that matter most to us.” In actual fact, however, the Women’s Equality Party, which was founded by New York Governor Andrew Cuomo in July, seems inspired by nothing so much as his desire to undermine the progressive Working Families Party. Cuomo’s attempt to hijack feminism for his own petty ends is such a craven move it could have been dreamed up by the scriptwriters at VEEP. It would be bleakly funny if it didn’t pose an actual danger to an organization that has always fought for New York’s women.

One of the great ironies here is that Cuomo’s feud with the Working Families Party stems, in part, from his refusal to do enough for women in New York, despite his staunch support for reproductive rights. Like many on the left, the WFP, a coalition of unions, activists and community organizers, was incensed by Cuomo’s tacit support of a weird alliance in the New York State Senate, in which the Republican minority teamed up with a small faction of breakaway Democrats to wrest control from the Democratic majority. That’s a big reason why Cuomo’s vaunted Women’s Equality Agenda, a 2013 legislative package that’s now a centerpiece of his campaign, never went anywhere.

Meanwhile, his economic policies have hit New York’s women, who are more likely than men to live in poverty, especially hard. According to the National Women’s Law Center, about six in ten of New York’s minimum-wage earners are women. Cuomo fought efforts at a meaningful raise in the minimum wage, only changing his stance when the Working Families Party forced his hand.

A stalwart of state progressive politics, the WFP takes advantage of the fact that New York election law allows for cross-endorsements, letting minor parties nominate major party candidates on their own lines. That means that the WFP can use the hope of winning its nomination—as well as its not-insignificant organizing muscle—to pull Democratic candidates to the left without acting as a spoiler. (The WFP’s progressive imprimatur tends to be particularly significant in contested Democratic primaries.) At the same time, minor parties like the WFP secure their place on the ballot by getting enough people to vote on their line, even if the votes are for Democratic or Republican candidates.

Earlier this year, it seemed that the WFP, disgusted, like much of the left, with Cuomo’s rightward tilt on economic issues, would endorse Zephyr Teachout in the Democratic primary. That never posed any real threat to a Cuomo victory, but a significant defection among left-wing voters could have hurt Cuomo’s presidential ambitions.

In the end, the party and the governor came to an agreement. (Teachout, meanwhile, won 34 percent of the vote even without the WFP’s endorsement.) In exchange for the WFP’s nomination, Cuomo would agree to support a number of progressive priorities. Among them were efforts to restore the State Senate to Democratic control—not the sort of thing, ordinarily, that a Democratic governor would need to be strong-armed into doing—as well as passage of the Women’s Equality Act and raising the minimum wage to $10.10 an hour, with cities and towns retaining the option to raise it up to $13.

The day after winning the WFP’s nomination, Cuomo declared victory to a reporter from the New York Daily News, says, “It’s very simple. At these political conventions you either win or you lose. And I won.” But the famously vindictive governor evidently still carried a grudge, and so in July, he launched his own minor party to compete with Working Families. “[S]ources said the governor considered several third-party creations before settling on the Women’s Equality Party, including an education-themed organization…and a ‘New Americans’ Party to focus on immigrants rights, another W.F.P. priority,” reported Capital New York. “It’s not lost on savvy observers that the acronym for the governor’s new party—WEP—is just one letter off from ‘WFP’ And if the WEP manages to siphon off progressive voters from the labor-backed WFP, Team Cuomo will certainly shed no tears.”

But feminists should. It’s one thing to be pandered to, and another to be used. This month, Cuomo started running TV advertisements, featuring his daughters and his girlfriend, urging people to vote for him on the WEP party line. A PR firm is contacting journalists offering interviews with former mayoral candidate Christine Quinn on the ersatz party’s behalf. (This is yet another dark irony, since Quinn’s bad blood with the WFP stems from the years she spent as City Council Speaker blocking paid sick leave, a consummate women’s issue.) Yesterday, Hillary Clinton spoke at a Cuomo campaign event that doubled as a WEP rally, which seemed intended to create the impression that Clinton supports the new party. (Her actual stance is unclear.) The Cuomo camp is also running media campaign features a photo of Vanessa Hudgens, that well-known feminist rabble-rouser, holding a sign saying, “If you believe in equal rights for women, please take a stand with me on November 4! #VoteWEP.”

If enough people do that, rather voting for Cuomo on the WFP line, the latter could conceivably lose its place on the ballot in 2016. At the very least, it might get pushed down, appearing below parties like the Greens, rather than in the fourth-place slot it currently holds, just beneath the Democratic, Republican and Conservative Parties.

That would be bad for New York women. There’s a reason why genuine feminist heroines like Ai-jen Poo, director of the National Domestic Workers Alliance, appears in a just-released video of women endorsing the WFP. As Gloria Steinem wrote this week in her own recent WFP endorsement, “I was there when WFP led the successful fight for Paid Sick Days in New York City. That victory has meant that thousands of parents no longer have to choose between risking their jobs and taking care of their kids. I saw them help win increases in the minimum wage and a Domestic Workers’ Bill of Rights in Albany, directly improving the lives of the women who make up more than 95% of all domestic workers in our state.”