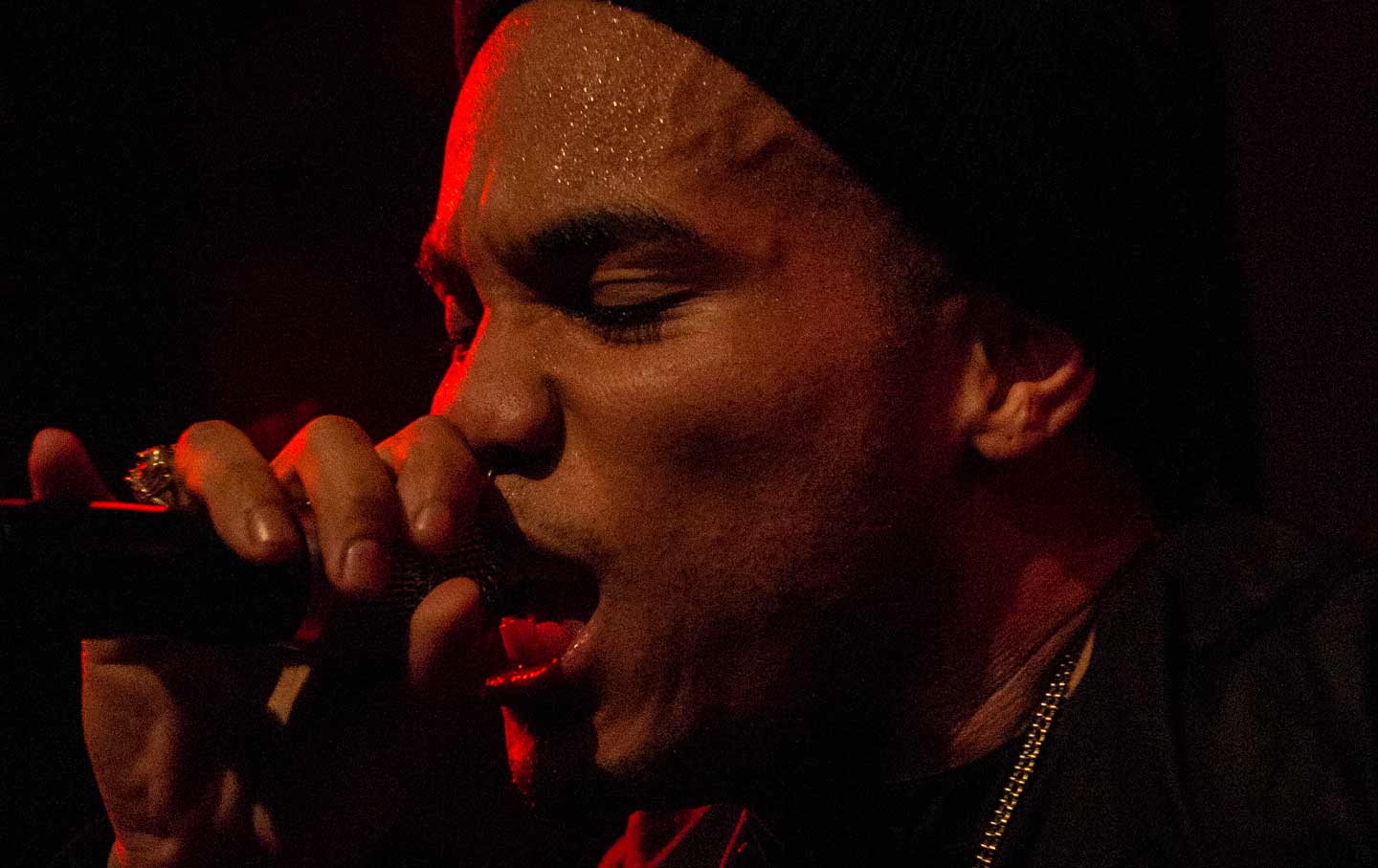 Anderson .Paak performs with his band, The Free Nationals, at SOB’s on February 4, 2016. (Sean Pressley)

Perhaps the easiest observation to make about Anderson .Paak is that he’s hard to categorize. His music blends so many genres and cultural traditions. He’s both a product of the lineage of hip-hop, funk, R&B, soul, disco and an artist who mixes those sounds with just enough freshness to resist being chained to nostalgia and mimicry.

The crowd at last Thursday’s sold-out show at SOB’s reflected the many different access points that Anderson .Paak’s music opens up. There were women with box braids and hoop earrings; dudes with beards; men and women with afros and high-top fades; people dressed like they’d just taken the train a few stops south from their Midtown offices. After three opening acts (one guy who sounded like Bruno Mars; a guitarist who had more of Jimi Hendrix’s theatrics than any of his skill; and an entertaining DJ), .Paak came onstage at around 10:45 wearing a black skullcap, a gray jacket and black hoodie that he’d soon do away with, and silver and gold dog tags. A DJ, a guitarist, a bassist make up The Free Nationals, .Paak’s backing band. The screen behind them displayed the cover of .Paak’s second LP, Malibu, which was released in January after a year of rising mainstream success for .Paak. (He puts the period there, he says, because it’ll make people look twice at his name.)

Another, more quietly stated, observation about .Paak: His success has been a long time coming. Before all of the features and cosigns, and before his first LP, Venice, .Paak went by the stage name Breezy Lovejoy. In that era, from about 2012 to 2014, Breezy released a few albums for free and, despite a laudatory tweet from Questlove, gained little traction among popular audiences. What’s more telling, though, is that these two observations have probably got about as much to do with .Paak and his music as they do with us.

The crowd that night, though, seemed to know his older stuff. About 30 minutes into his set, .Paak transitioned into “Might Be,” a song from the 2014 Venice, and much of the audience sang along. .Paak and his band put on a well-structured set that mixed nearly all of his music with covers by some of the musicians who inspire him (Curtis Mayfield, David Bowie), as if to say to those in the audience, and especially to those who couldn’t hear him but, nevertheless, haven’t been listening: “Here I am.” As the band began to play “Carry Me,” a meditative ballad about his family and his journey to success in the music industry, .Paak put the mic back into its stand and took a seat behind the drum set. He played along with the band and sang the rest of the song from the back of the stage. “What’s the meaning of my fortune reading / when I crack the cookie / and all it says is ‘Keep Dreaming’?”

Malibu is .Paak’s best work. It’s a layered album that is so fun and easy to listen to that, on each return listen, you hear something new: a lyric whose meaning is different or a vibrant arrangement that you missed. But mostly it’s enjoyable each time. The most prevalent themes in his music are love (the possibility of a new one; one grown heavy and lost), pain (especially the self-inflicted kind), time (cherishing the little of it we have), and alternating between vulnerability and a hard heart. One of the standout songs is “Put Me Thru,” a mid-tempo track that’s got enough bounce to make you want to dance. The lyrics, however, are more haunting. In a hurtful relationship that he can’t bring himself to leave, .Paak sings, “Strange and elusive, too afraid to lose it / I don’t mind this pain.” As the chorus goes, “It must be what you put me through” that keeps him. The beauty in the song isn’t really its singular parts: Encouraging you to dance to a song about sadomasochism creates enough space between the musical poles (sound and lyrics) to reflect, wonder why the song makes you feel good, and if it should. Malibu showcases strong showings on nearly each of its 16 songs. The low points (“Silicon Valley”; “Water Fall”) come when .Paak seems to lose his sense of grounding in tradition and grasp for newer, trending sounds.

It’d be easy to apply to .Paak one of the words we use for so many other popular artists in the generation of Kanye West (dope, wavy, vibes, fresh), and any of those could stick. But we’d also be missing so much else. Let’s be grateful he’s here.