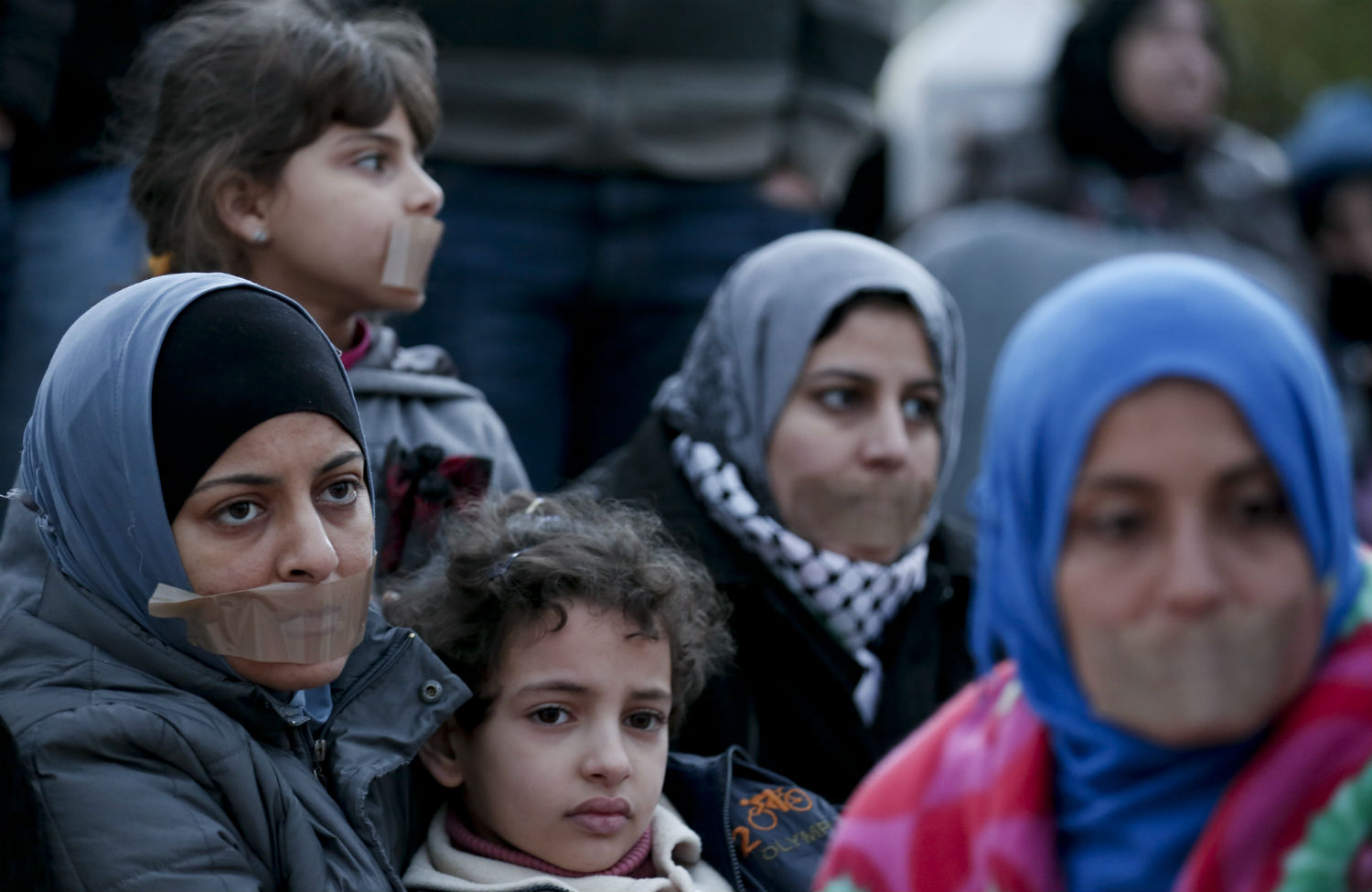 Syrian protesters sit with their mouths taped shut, during a protest outside parliament in central Athens. (AP Photo/Petros Giannakouris)

The images dissolve, match and mismatch, across continents and time zones, St. Louis, New York, Athens: police violence, protests, blazing cars; men in suits; sleeping bags laid out on rainy streets at night. We are experts now at fragments. Here and there a glitch in the matrix forces a connection.

Two hunger strikes are happening in Athens this week. One is in plain view, in Syntagma Square, where Syrian refugees—perhaps 500 at the protest’s peak—have been camped out for two weeks now, some of them refusing food. The other, under guard in the Gennimata Hospital, is far more visible. The 21-year-old anarchist prisoner Nikos Romanos hasn’t eaten for twenty-six days and his condition is worsening. #NRomanos is trending on Greek Twitter, with updates about his health and solidarity protests.

The Syrians, who have fled civil war and survived a dangerous journey, want to be allowed to seek asylum elsewhere in Europe, where they can find shelter, food and dignity. Their presence has attracted gifts of food and clothing, ritual declarations of support from other demonstrations that pass by, and almost no coverage in the mainstream media, inside or outside Greece. One of the protesters, the young doctor Ayman Ghazal, has just died of exposure trying to cross the border to Albania. His death has hardly been reported anywhere.

Romanos, sentenced to fifteen years for armed robbery last month, is demanding a study furlough to exercise his statutory right to education at a technical college. He’s been refused, on the grounds that he’s still awaiting trial on two counts and may abscond. His hunger strike has sparked huge demonstrations and riots in Athens and solidarity protests in many other towns. The headquarters of the private-sector union federation in Athens is under occupation; so is a central cinema in Thessaloniki. Alexis Tsipras, president of Greece’s left party Syriza (and likely future prime minister), has said that Romanos’ case concerns the whole of society.

The dark thread of Romanos’ story begins at the moment when the crisis erupted in Greece. On December 6, 2008, an auxiliary police officer shot and killed his friend the 15-year-old Alexis Grigoropoulos, while they were out celebrating Romanos’s nameday—two middle-class boys from the suburbs hanging out downtown. The shot broke a tidal wave of frustration and pent-up rage: thousands of young Athenians who saw no future in their parents’ rotten world walked out of school and blocked the roads and set Athens on fire for weeks. Not long afterwards, the ratings agencies downgraded Greece for the first time: it had begun to smell to them like a failed state. Romanos gave a statement to the police, saying, “My friend was executed in cold blood.” He helped to carry the white coffin at the funeral. Then he disappeared.

He surfaced four years later on Greece’s TV screens, his face retouched to hide the swollen bruises inflicted by police. By then the crisis was in full swing: jobs lost, salaries slashed, families broken, lives aborted. Police brutality, on the streets and in the cells, had become routine, targeting protesters and immigrants. The neo-Nazi party Golden Dawn was riding high, beating up dark-skinned people with impunity. Few people had much faith in the state, the police or the justice system any more.

Romanos was arrested with three other young men in northern Greece for armed robbery, possession of heavy weapons and taking a hostage. Like a modern Gavrilo Princip, he confessed to the weapons, the hostage and the robberies (in which no one was hurt), and declared his political motives—“We are urban guerillas”—while denying membership in the terrorist organization Nuclei of Fire. In prison awaiting trial, he married his girlfriend and passed the national exams for Greece’s technical colleges.

The power of Romanos’s story is as a parable of the crisis, the social and personal breakdown so many Greeks have lived. For his supporters he has become an almost mythic figure, the hero of a real-life Hunger Games. A boy with his life ahead of him derailed by a bullet from a policeman’s gun—a bullet that shattered a country’s sleep in a shower of splintering glass. A white, bewildered face that disappeared for years to resurface battered and bruised as a dark Robin Hood, armored now with an angry ideology. A boy who swallowed the sanctioned lawlessness and chaos of the state and mirrored it back again like a rogue Robocop. A young man whose hunger strike echoes the many suicides of the last few years, but in slow motion on the public stage. A young man easily assimilated to the Greek left’s pantheon of young men murdered by the right, the state or the police.

Romanos says he won’t eat until victory or death. The government is under pressure from all sides—the lenders, the left, its gaping internal splits—and has waited too long to back down without seeming to bend to blackmail. It’s the eleventh hour, the eve of December 6—the anniversary of Grigoropoulos’s death. Athens will be in lockdown for the Turkish prime minister’s visit; there will be protests and thousands of riot police blockading the city center. At the moment, it looks like a stalemate.

The Syrian refugees have no such public narrative to draw on, no authority to threaten with their martyrdom. Supporting them is in no one’s political interest, nor does their plight form part of anyone’s myth. Most of their stories are unknown, or circulating only on social media. The journalist Damian Mac Con Uladh has been spending time with them in Athens and posted this on Facebook:

What do you tell a Syrian father stuck in Athens who is so desperate that he’s thinking of trying to walk—at night and in winter—through the forests of the Republic of Macedonia and beyond in his attempt to bring his 9-year-daughter, Mariam, to safety in Sweden? What do you say to a man who has lost his wife and a girl her mother three years ago in a bombing? To a man who only has a “travel document” but not a passport because he is officially a Palestinian refugee whose grandfather was uprooted from Palestine in 1948? Last month they got as far as the third village in Macedonia but had to give up when the daughter nearly died of the cold. Some weeks before that they were six hours in the water after their boat sank en route from Turkey to Greece. His money is running out and they are staying in a flea-infested hotel in Athens. Both of them are covered in bites but he can’t get medicine unless he goes to the doctor. He’s so anxious that he cannot sleep at night, while his daughter, when no one is looking, cries for her aunt in Sweden, who looked after her when her mother was killed. The daughter was the best student in her class in Syria and in Lebanon, where they fled initially, and would be an asset for any country. They could get asylum in Greece but would get no help in starting a new life here, and may never be allowed reunite with their relatives elsewhere. These people are war refugees. They have lost everything. All they want is to be able to restart their lives in peace and security. Is that too much to ask for?

Thousands of refugees have died trying to enter Europe. Now they are also dying trying to move inside it, from Greece and Italy where most of them first land to countries where they have a chance of a decent life. Under EU rules refugees must claim asylum in the first country they reach; Greece is legally bound to prevent them from going elsewhere in Europe. Three and a half million people have fled the Syrian civil war. According to Amnesty International, Turkey is hosting at least 1.2 million; Germany has taken 20,000. Britain has taken ninety.

“Malakes! You are the refugees of Europe,” read a slogan near the Athens University Library at the height of the crisis. Some strikers and protesters in Athens have stopped by the Syrians’ camp, brought them sandwiches, exchanged solidarity slogans. For the most part it’s been little more than a rhetorical exercise. It’s hard to watch the videos of the riots in Athens this week alongside footage of the Syrians sitting quietly in the rain a few hundred metres away. But it’s also hard to connect. People in trouble are inevitably caught up in their own dramas.

A hunger strike touches on the things all human beings share: the way pain and deprivation are written on the body. By tomorrow, no doubt, the Syntagma Syrians will be displaced again, moved on by the same riot police who will battle the supporters of Nikos Romanos.