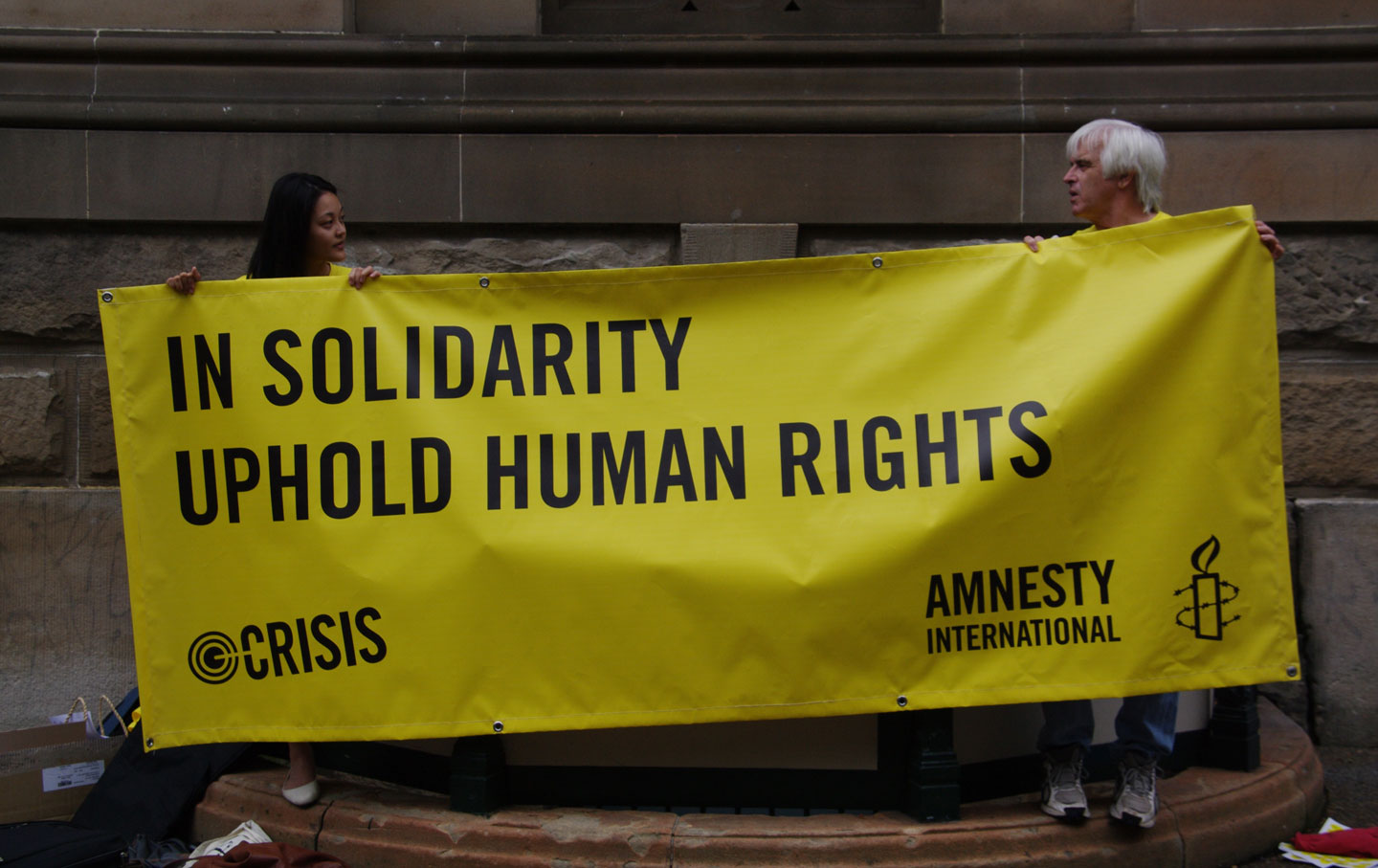 At the close of their Dublin meeting yesterday, delegates representing Amnesty International members worldwide voted in favor of taking up sex workers’ rights. Their vote authorizes Amnesty’s international board to adopt a policy to protect sex workers rights, including “the full decriminalization of all aspects of consensual sex work.”

“This is an important step for sex workers all over the world,” Luca Stevenson, coordinator of the International Committee on the Rights of Sex Workers in Europe said. The policy drew controversy in the weeks leading up to the meeting, when a draft leaked online. Opposition to the policy misrepresented its aims as legalizing or otherwise condoning abuse and violence.

“We really hope that those who have opposed Amnesty’s position in the past will reconsider their position and look at the evidence that criminalization of sex work is a key factor in our vulnerability to violence and abuse,” Stevenson told me. “We hope that this evidence-based decision by Amnesty will help other progressive organizations take a position to support sex workers’ rights.”

It’s not evident yet what power this evidence has with those who object to Amnesty’s policy because they are anti-sex work. Across social media, anti-sex work lobby groups like the Coalition Against Trafficking In Women and Demand Abolition repeated their points throughout the weekend meeting. At times, anti-sex work posts overwhelmed the Amnesty meeting hashtag, alongside posts from anti-abortion campaigners. An image of Amnesty’s candle logo circulated, the candle wrapped in barbed wire replaced by an erect penis.

Yesterday Amnesty released a short video responding directly to their opposition in a montage of headlines like “Amnesty International says prostitution is a human right – but it’s wrong” and claims that Amnesty’s decision would “make sex trafficking easier.”

“Prostitution is not a human right, but sex workers have human rights,” Amnesty’s Deputy Europe Director Gauri van Gulick replied in the video. “We know that gender inequality and other forms of inequality and discrimination are pushing, forcing people into the sex industry. We believe that you cannot punish those who are there, who are driven to sex work, by criminalizing it and in fact taking away choices. We believe we need to work on gender inequality more broadly and that’s what we stand for.”

By backing decriminalization, of course, Amnesty has not changed any law; their policy sets the groundwork for campaigning by Amnesty’s members and national sections. It’s this that could be a substantive boost for sex workers’ rights advocates. “Along with many other sex workers in Canada, I hope our win today at Amnesty International will lead Canada toward decriminalization,” said Morgan M. Page, a Canadian trans sex work activist. Canada’s 2014 anti-sex work law, dubbed the “Protection of Communities and Exploited Persons Act,” is modeled on the anti-sex work laws in Sweden and Norway. Though these laws are often described as “decriminalization” by their supporters, sex workers’ rights advocates—and now Amnesty as well—have shown they still criminalize sex workers and expose them to police violence.

“Amnesty’s support of decriminalization is a huge win for trans sex workers across the world who face a heavy burden of criminalization,” Page added, “but who are largely ignored by the Rescue Industry”—a term coined by anthropologist Laura Agustin, used by sex workers’ rights advocates to describe those organizations set up to get sex workers to leave sex work, and who also lobby for laws against sex work. These are also some of the organizations—like Eaves in the United Kingdom, and Breaking Free in the United States—who oppose Amnesty’s support for decriminalization.

Anti-sex work laws don’t function in isolation; in fact, they have been used to advance other policy agendas, like—most recently, in large global cities—gentrification. In North America, anti-prostitution laws are also inseparable from colonialism. “Amnesty’s policy explicitly refers to indigenous peoples and calls on states to recognize and respect indigenous rights,” said Naomi Sayers, an indigenous feminist and sex work activist “from colonial Canada.” “The first bawdy house laws in Canada were enacted under the Indian Act, and that is how indigenous peoples were first criminalized: under the Indian Act.” Decriminalization is also inseparable from this legacy, Sayers said. “To support the decriminalization of sex work, especially in Canada, would be to acknowledge this history and respect the healing of indigenous peoples and to protect indigenous peoples’ sovereignty over their land and body.”

Too often, the stories of women who are no longer engaged in sex work and who reject sex work gain more attention than the testimony of sex workers who are still in the industry, and whose needs should be primary when it comes to setting policy. “I am an Australian sex worker living within a licensing system,” Nell Gwynn wrote me, using a pseudonym. “I do not speak for all sex workers—I only speak for myself, from my own experience. I am not a representative, because none of us are.” In the case of Amnesty’s proposal, Gwynn wrote, “while the policy draft is far from perfect, and requires plenty of work and improvement to truly achieve equity across all intersections of sex work, I hope that this is a sign that Amnesty is willing to listen to us.”

Amnesty’s announcement refers to sex workers as “one of the most marginalized groups in the world,” but today it is especially worth underscoring the resistance of sex workers. Sex workers have organized against police violence, HIV/AIDS, and punitive laws for decades—and did so while facing exclusion from feminist and human rights organizations. “All the years of work that our rights movement has put in while we have been accused of running the errands of some imaginary pimp lobby, and the Swedish Model being spread like the plague, it has finally payed off,” Pye Jakobsson, president of the Global Network of Sex Work Projects wrote me. “It is about time.”

Staff at Amnesty who were part of this process recognize this. “As the world’s largest human rights organization we are proud to finally be able to join in solidarity with the sex worker’s rights movement who fight tirelessly for recognition of their rights globally,” Catherine Murphy, of their law and policy team and Jaime Todd-Gher, an Amnesty human rights adviser/advocate, wrote me after the vote. “The marginalization and abuse that sex workers in many countries experience is against everything we stand for as human rights defenders. We hope that in the years to come our movement can work with sex workers to help bring an end to these human rights violations.”

“For me the focus really needs to be with workers about the rights they do have, recourse they can take, and ways to stay safe,” P Marie (a pseudonym), writer, advocate and former sex worker from the American Midwest told me. “Harm reduction has always been a big deal to me—essentially to say, as no one is helping us, let’s find ways to help ourselves. I’m really big on community and organizing that way. If we can continue to build community, then we can continue stronger advocacy for change that is coming.”

Amnesty’s endorsement for something sex workers have long demanded—full decriminalization—is a powerful one. There’s also much more to do, as many advocates told me. “This is by no means a landslide victory of any sorts, in my opinion,” P Marie said. “It’s the beginning.”