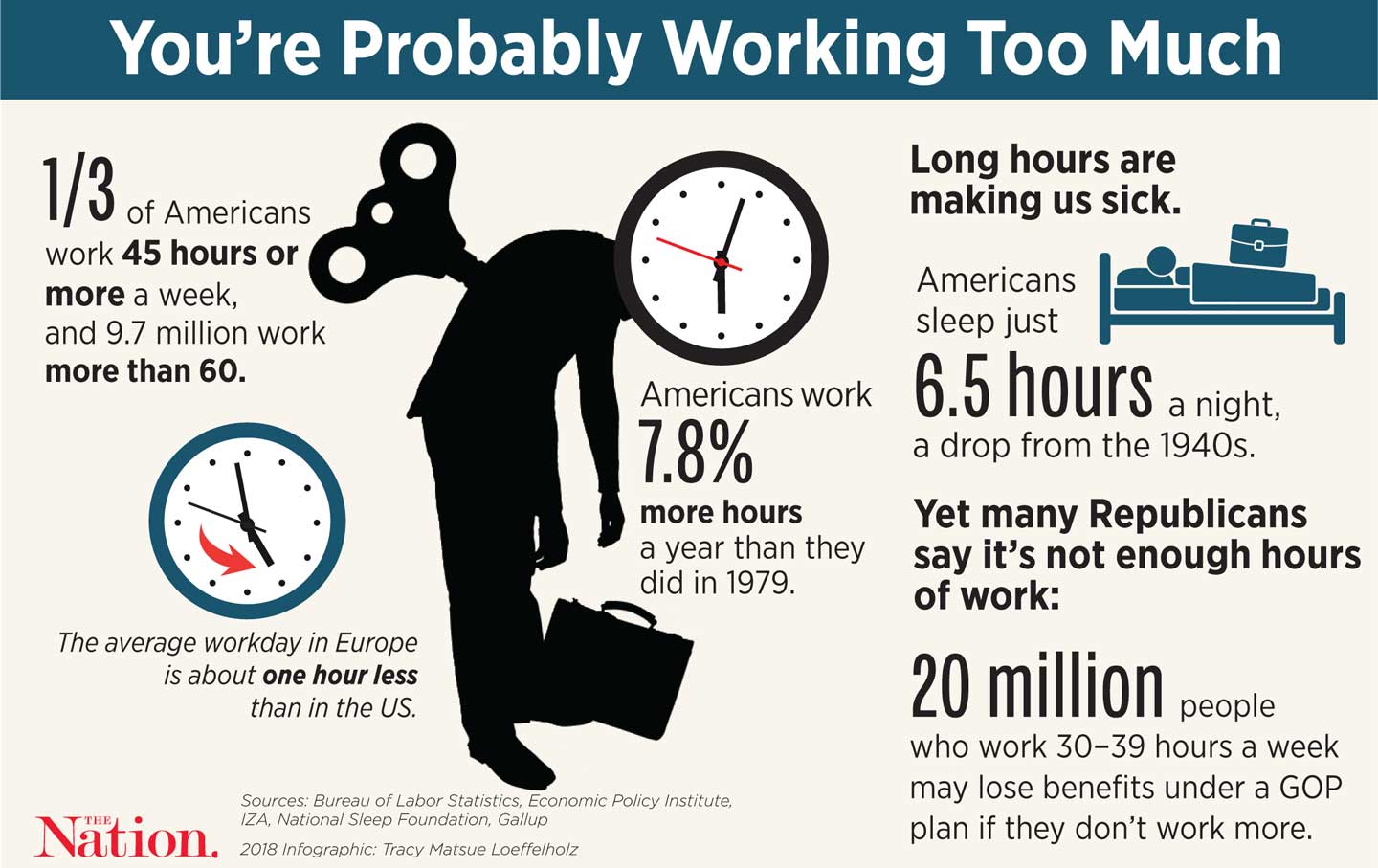 The House of Representatives appears set to pass a bill stuffed with attacks on the Affordable Care Act, including a provision that would allow companies to stop providing health insurance to employees working between 30 and 39 hours per week.1

The so-called Save American Workers Act would do exactly the opposite of what its name suggests, by racheting up the already long hours that Americans spend at work. While we’re not at the top of the list of developed countries with excessive work hours—Mexico, Greece, South Korea, and nine others are higher—Americans work about 20 more hours each year than the average. One study in 2016 found that the average European puts in somewhere between 7 and 19 percent less time at work than the average American, which translates to between 30 and 90 minutes less each day. Nearly a third of American employees clock 45 or more hours at work each week, and about 10 million put in 60 hours or more. Americans of prime working age now work 7.8 percent more hours than they did four decades ago.2

Part of the problem is that we have so few protections against employers who demand that we keep our noses to the grindstone. Unlike every other developed country, we don’t have a guaranteed right to paid time off for illness, a new child, or holidays and vacation. Even weekends off are a custom, not a rule. And we don’t cap how long our work hours can stretch each week. Overtime-pay requirements can restrain an employer’s desire to keep workers at the factory or in the office for more than 40 hours per week, but except in a handful of industries, there’s nothing stopping our bosses from usurping more and more of our time.3

Ironically, these increasingly long work days don’t mean we’re making more widgets or serving more customers. Reams of studies have found that working extra hours increases output only up to a point—that point being somewhere between 40 and 50 hours a week. After that, we get less done. In one recent experiment in Göteborg, Sweden, workers who put in just six hours a day were more productive than those working regular eight-hour shifts. Germans clock the fewest hours each year among developed countries, but you’d be hard pressed to find someone accusing them of being economic slackers.4

Not to mention that spending more time at work siphons those hours away from our personal and leisure time. In a 2013 poll about sleep, the United States came in fifth of six developed countries, with the American respondents saying they slept only about six and a half hours every work night, a sharp decrease since the 1940s. It’s tough to cook food, run errands, rest, and spend time with family or friends if work eats up 50 to 60 hours of your week.5

The Shareholder Revolution Devours Its Children

There have been a few steps toward addressing this crisis in recent years. The Affordable Care Act’s definition of full-time work as 30 hours or more per week is one of them. More important, the Obama administration changed the threshold for qualifying for overtime pay above 40 hours a week so that millions more Americans would be covered. If employers have to pay their employees more when they stay late, they might urge them to go home instead.6

Rather than build on that success, however, the Republicans have torn it down. The Trump administration decided not to defend the overtime rule in court, and last August it was struck down before it went into effect. Now congressional Republicans want to increase the number of hours that count as full-time work. Nearly 66 million people work 40 hours a week and would be at risk of having a single hour deducted from their schedules so they can be legally denied employer-paid health insurance. Meanwhile, the 20 million people who already work between 30 and 39 hours a week would have to scramble to clock more time to keep the health insurance they’re entitled to now.7

We can’t reduce overwork by forcing people to make an agonizing choice: Work less and get fewer benefits, or work more to keep the ones you already have. Instead, we must ensure that Americans can opt to work fewer hours while keeping the benefits and pay that they need to survive. We’d still get plenty done. We’d just get more time to be humans, too.8