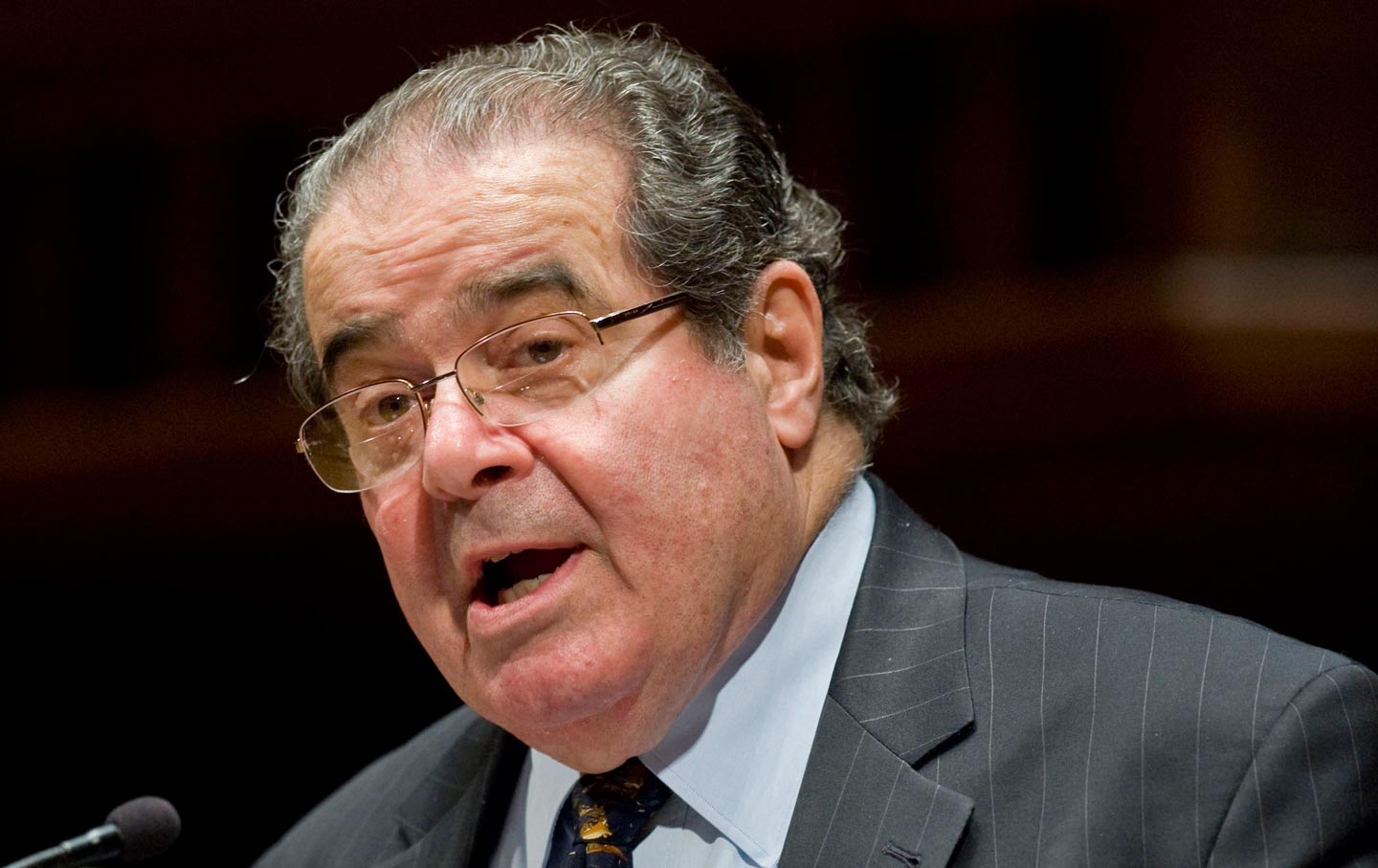 Bush v. Gore. Hobby Lobby. Citizens United. Gutting the Voting Rights Act, affirmative action, gun control, the Violence Against Women Act, and—one last middle finger raised against human progress—EPA regulations to control global warming. These are just a few of the disastrous 5–4 Supreme Court decisions in which Justice Antonin Scalia, who died last week at the age of 79, participated. If it were all up to him, we’d be even worse off: He was in the minority voting against the Affordable Care Act and same-sex marriage, and in favor of people being executed for crimes they committed as children. In his world, women would be barred from the Virginia Military Institute (and who knows where else), Roe v. Wade would be long overturned, and Miranda warnings would be history. The list goes on and on.

Granted, Scalia loved opera. He was Ruth Bader Ginsburg’s friend. Those who knew him say he was convivial and witty and enjoyed life. He had a big vocabulary, including many colorful synonyms for nonsense (“jiggery-pokery,” “argle-bargle”). I sympathize with his lack of interest in healthy eating and exercise. But he doesn’t deserve all the nice things liberals are saying about him. Just because someone is dead, they don’t become a cuddly teddy bear.

There aren’t many people of whom one can say that if it weren’t for them, we’d be living in a different world. The five conservative justices of the Supreme Court who installed George W. Bush as president certainly qualify. By stopping the vote count in Florida, they changed the course of history—and in a way that, unlike many judicial decisions, cannot be revisited. The damage from the wars in Afghanistan and Iraq cannot be undone or repaired; over a decade later, their consequences have spilled out into an even larger region of the Middle East. At home, Republican candidates vie with one another over who is the most willing to torture. This is the world Scalia helped make.

It is astonishing that Scalia, a conservative Catholic with rigid views on sexual morality, whose judicial philosophy of “original intent” specifically barred interpreting the Constitution in the light of modern circumstances, so successfully imprinted his views on the legal world. When Reagan appointed him in 1986, his views on social issues weren’t so far out of the mainstream. Homosexuality was taboo. Gay marriage was an oxymoron. The Equal Rights Amendment was dead. Americans have evolved a lot since then, including those who call themselves conservative, but Scalia was set in cement. Today, his writings on gay rights sound like the ravings of a radio shock jock: In his dissent in Lawrence v. Texas (2003), which struck down that state’s anti-sodomy law, he wrote of “the homosexual agenda.” Over the years he compared homosexuality to murder, polygamy, bestiality, incest, child abuse, prostitution, the “recreational use of heroin,” and “working more than 60 hours a week in a bakery.” Some day a psychoanalyst will have a field day with Scalia’s subconscious.

The country is progressing in other ways as well. Scalia’s enthusiasm for capital punishment was mainstream when he joined the bench. In 2015, a mere four states accounted for the vast majority of executions in America, and there are fewer every year. Scalia deferred to religion even as Americans are becoming less religious—including Catholics. His casual racism could be breathtaking: The Voting Rights Act was “a racial entitlement”; black students might do better at “a slower-track school.” His final vote, issued just four days before his death, was to join yet another 5–4 majority to thwart President Obama’s Clean Power Plan—even as the country finally accepts the fact of climate change. Citizens United has produced an uproar in both parties, leading directly to insurgent campaigns by Bernie Sanders and Donald Trump. Sanders, by the way, has said that a willingness to overturn Citizens United would be a litmus test for his Supreme Court nominees.

On women’s rights, Americans have moved way ahead of Scalia, who voted against Lilly Ledbetter’s right to sue for sex discrimination because she didn’t discover soon enough that she was paid less than her male colleagues. (Congress amended the law in response to the court’s decision, something Scalia frequently challenged lawmakers to do if they didn’t like his rulings.) In 2011, he said discrimination against women wasn’t prohibited by the Constitution. (Scalia walked that back a few years later. Maybe his good friend RGB reminded him that the 14th Amendment’s equal-protection clause has been applied to women for 40 years.)

Abortion rights appear to be one area in which Scalia’s views have some popular backing. Although most Americans support Roe v. Wade, polls show majority support for restrictions that violate Roe, like 20-week bans and the federal “partial-birth abortion” ban. A minority also favors laws that make it harder for clinics to stay open, like the ones in Texas at issue in Whole Woman’s Health v. Hellerstedt, which the Court will hear March 2. But according to a National Institute of Reproductive Health survey, 55 percent of respondents don’t know about the broad scope of these restrictions (318 state laws since January 2010) and, when they’re informed, don’t approve: “Large majorities of voters say they want the experience of abortion to be safe, legal, respectful, supportive, affordable, accessible, and without shame.”

People on the left used to mock the idea that the composition of the Supreme Court was a compelling reason to vote for sellout, wishy-washy Democrats. A long time ago, I said some things along those lines myself—but whatever sense that made 20 years ago is long gone. We’re in a different era now. Whether or not Obama is able to name Scalia’s replacement, two or even three seats will probably become vacant in the next administration, giving Obama’s successor tremendous power to shape the direction of the Court for the next 20 or 30 years. Supreme Court justices tend to be very long-lived. Choose wisely.