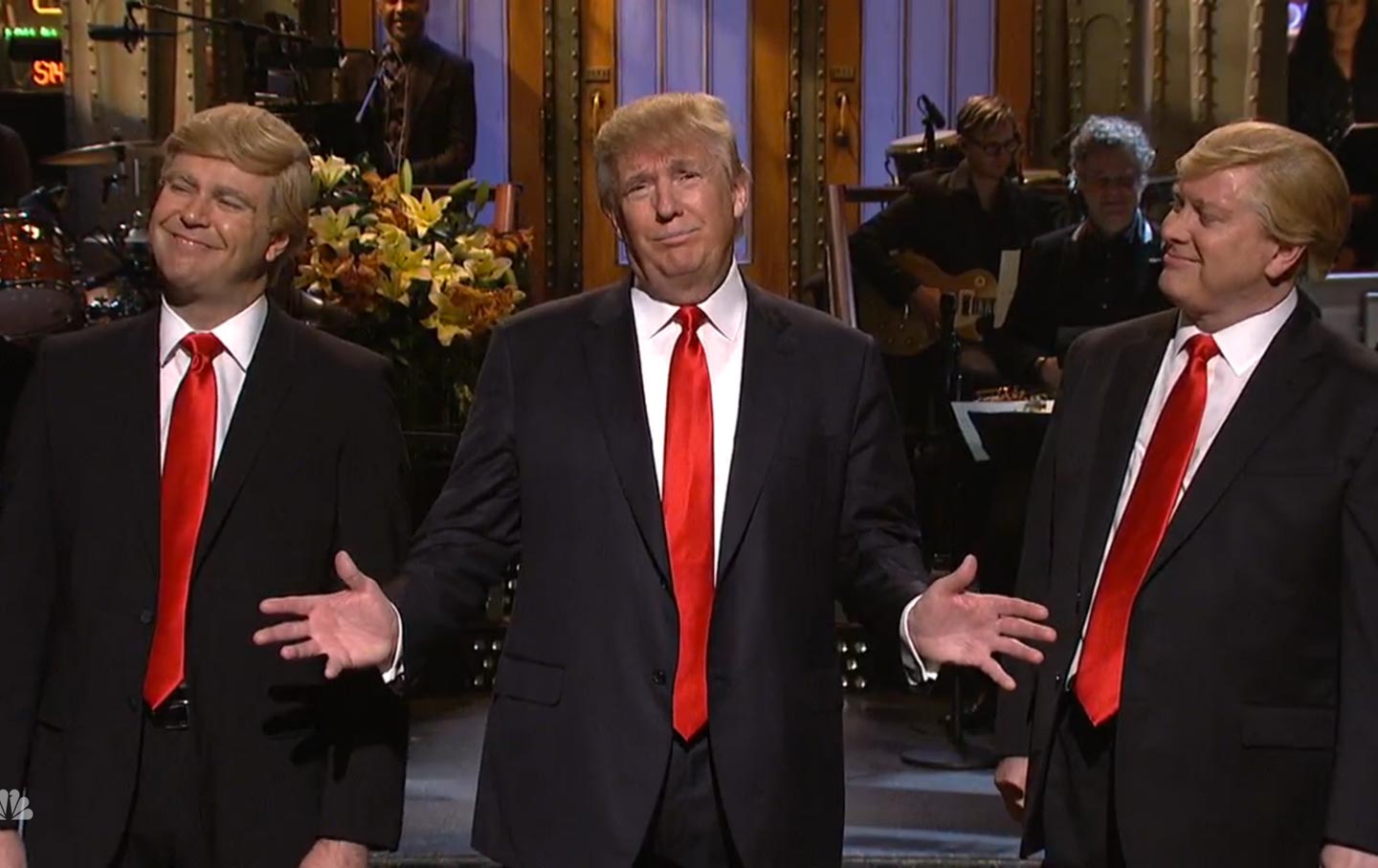 “The American people are sick and tired of hearing about your damn racism,” Larry David might as well have shouted at Donald Trump during his Saturday Night Live monologue. Of course, David’s literal words seemed to say the opposite: “You’re a racist!” he yelled off-camera. But David, fresh from reprising his popular parody of Bernie Sanders in SNL’s cold open, was only pretend-heckling.

What David was actually doing was defusing SNL’s controversial choice of Trump as host, just as Sanders’s dismissal of Hillary Clinton’s e-mail controversy during the first Democratic debate inoculated her from the whole GOP-generated Benghazi boondoggle.

As SNL was being broadcast, the streets around 30 Rock were filled with demonstrators denouncing NBC for selling out to the man who called Mexican immigrants rapists and drug-dealers, and threatened to deport 11 million people and tear apart tens of thousands of families. Lorne Michaels’s late-night franchise was going for Trumpesque ratings (and by and large, it got them), but it was also starting to skid into a back-handed endorsement of the billionaire bigot who apparently laid a heavy hand on the script (more about that later). Larry David was there to reassure us that everything is kosher when it’s in the interest of holy humor.

After hearing someone cat-call him a racist, Trump said, “Oy, oy, I knew this would happen. Who is that?”

As the camera cut to David, he repeated, “Trump’s a racist!”

“What are you doing, Larry?” Trump sighed, as if disciplining an unruly child.

“As a businessman, I can fully respect that,” replied Trump. “That’s OK.”

So, after making the point that protest is just a cunning form of self-interested capitalism, Donald Trump magnanimously forgave the famously wealthy co-creator of Seinfeld for stooping to make a buck. And from there on out, any attempt at humor touching on Trump’s xenophobic bigotry fell flatter than a steam-pressed birth certificate.

The offer of five grand to any audience member who called Trump on his racism on live TV was for real. Deport Racism, the Latino rights group that put out the bounty, claimed victory after the show, and apparently it’s sending Larry David a check this week. “It may have been a joke,” DeportRacism.com campaign director Luke Montgomery said on Sunday, “but it got the point across in a huge way that Trump’s attacks on American children who are US citizens, calling them ‘anchor babies’ and threatening to change the US constitution because their parents are brown and Latino, is racist. Larry David is our hero.”

That judgment call seems as wrongheaded to me as the video Deport Racism recently released showing cute Latino children saying “fuck you” and “motherfucker” to Trump. Without the profanity, the video might have made a persuasive case—winsome kids explaining how Trump and his anti-immigrant rhetoric are hurting families. But instead they decided to work blue, exchanging sincere outrage for street cred… or something.

Most critics judged the show the way ad people judge an ad: Does it work? Does it help sell product? The David moment was, says a Daily Kos writer, “universally applauded,” widely seen as the comedic highpoint of an otherwise low-energy episode. As showbiz, Trump’s appearance, however, was almost universally panned as “painfully unfunny,” “nothing less than torture,” and “bland and boring and toothless.” It was boring and bland, as SNL way too often is. But while bland hurts SNL in the long run (as Jamie Poniewozik wonders, how many new viewers who came with the Trump-pumped ratings will return after “a joyless, unfunny show”?), bland worked very well for Donald Trump.

The GOP presidential co-front-runner not only came off as willing to spoof himself (his parody of dad-dancing to a Drake rap was the second-most praised bit), but, more important, as non-extreme—not like all those humorless hysterics outside protesting him. Like, can’t they take a joke? And Trump’s comedic edits made turning him into another Sarah Palin, who was hung by SNL from a rope of her own quotes, almost impossible. In a sketch about the first anniversary of President Trump’s administration, the president of Mexico presents Trump with a check for building the border wall, which should have been funny, but played instead like a pre-cog re-enactment. “Thanks, Enrique,” Prez Trump tells President Enrique Peña Nieto, played by Beck Bennett. (He couldn’t have been played by a Latino because SNL has no Latino cast members—there’ve been only two in SNL’s 40-year history, and no Latinas at all.)

In fairness, some skits did manage to criticize the host on more than his ego. “Weekend Update” co-host Michael Che ridiculed Ben Carson’s claim that the media didn’t vet President Obama. “Are you serious, dude? Even after Obama was elected president, twice, they still made him show ID just to get into the White House.” Then Che whispered, “And I’m talking about the guy hosting the show.”

Outright racist Drunk Uncle (Bobby Moynihan) just loves him his Trump, he tells “Weekend” co-host Colin Jost, “because he’s finally going to get rid of all the, every single one of them!”

“Crime, Colin,” Moynihan says. “I was going to say crime, Colin. Come on.”

Then he adds soto voce, “Crime perpetrated by immigrants!”

Whispers and lowered voices. That’s how the cast was forced to take on Trump in any meaningful way (as opposed to shouting an ironic and immediately rescinded charge that “Trump’s a racist”).

In fairness, you can’t blame the cast or the writers for this new low in political comedy. And, who knows, maybe Larry David thought he was doing the right thing. The die was cast when Lorne Michaels decided to go for ratings.

In doing so, SNL just made future racist blurtings by Trump and others seem a little bit more acceptable.