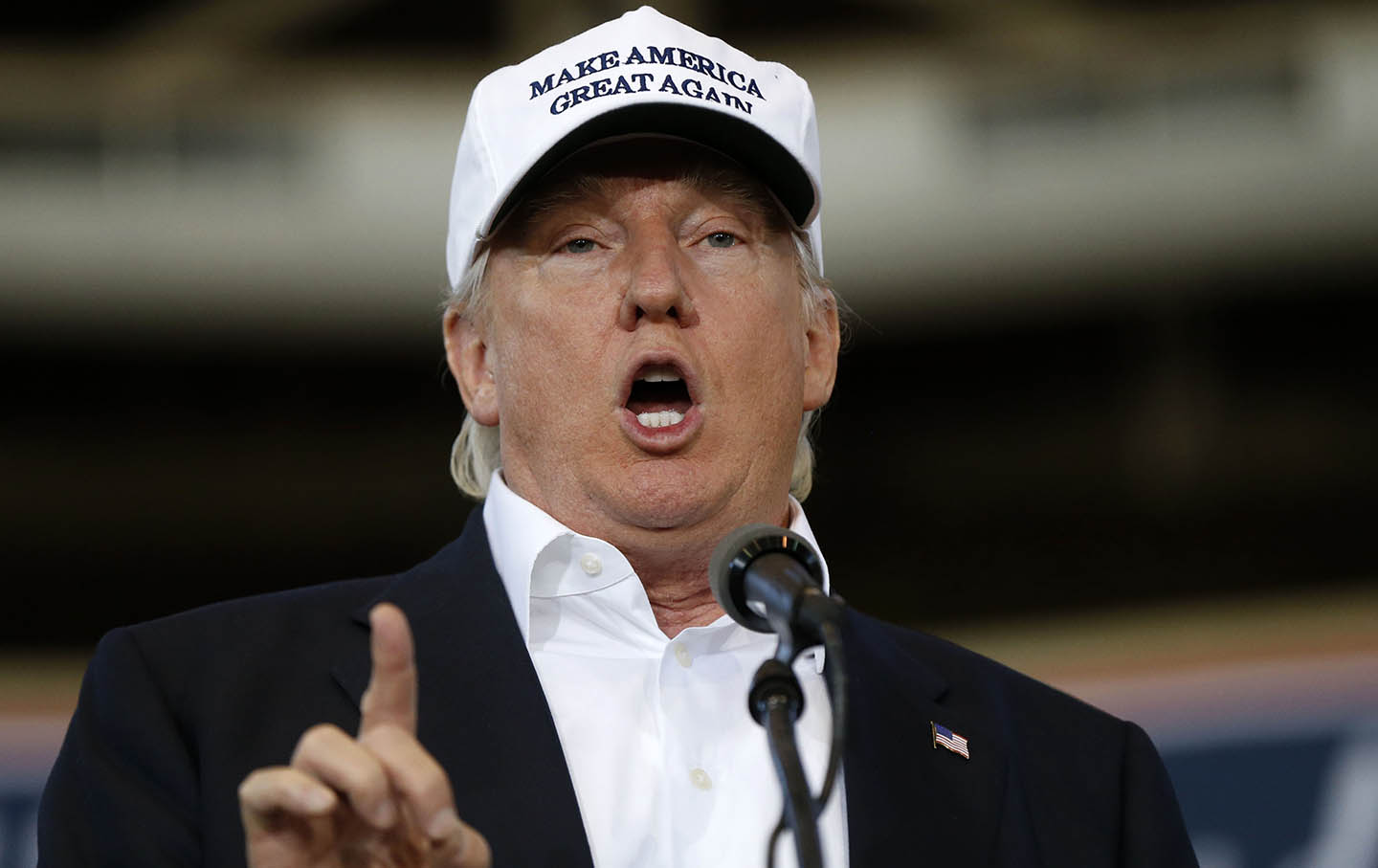 Incident: Despite many photographs plainly showing the contrary, Donald Trump insisted that his inaugural crowd was the largest in history.

Widely accepted view: He often lies, even when the evidence that he’s lying is readily available.

Alternative explanation: Donald Trump suffers from an affliction similar to but much more severe than double vision. It’s called macro vision, and it means that he “sees” a multiplicity of objects where relatively few exist. The condition is exacerbated by stress. It is thought that Trump was particularly stressed during the inaugural weekend, partly because of the refusal of big-name stars to entertain at the inaugural ball even though he knows Billy Joel. Macro vision is thought to be the reason Trump thinks he saw television coverage of thousands of New Jersey Muslims cheering the 9/11 attack. As far as can be determined, what he was looking at was a group of 12 to 14 cab-drivers, most of them Dominican, cheering a three-run homer while listening to a baseball game on a car radio. Doctors are not certain whether macro vision is involved in Trump’s habit of claiming that he has a lot more money than he really has.

He can lie and boast at the same time!

Incident: Despite nearly nonstop coverage of chaos at airports all over the world, Trump said the rollout of his travel ban was a success, with only 109 people denied entry. Homeland Security said the number was 721.

Widely accepted view: He is incapable of admitting mistakes.

Alternative explanation: Donald Trump did not realize that the chaotic crowds at airports shown on television were unusual. Having long ago given up flying on anything but a private plane, he hasn’t been in the commercial area of an airport for many years. He believes people who fly commercial are losers, and why would you want to let a bunch of losers into your country? The difference between his figures and Homeland Security’s figures is that they counted losers.

Incident: Despite remarkably consistent statements from a dozen women, Donald Trump said he had not actually done the groping he bragged about on the Access Hollywood tape.

Widely accepted view: Actually, he had. He was lying again.

Alternative explanation: He made up those groping incidents in a desperate attempt to impress Billy Bush. Before Trump meets someone for the first time, he spends two or three hours sorting through his boasts to see what it might be appropriate to brag about. (It is not true that he has a short attention span; when the subject is himself, he has a long attention span.) “I’ll tell him that I know Billy Joel,” Trump thought. Then it dawned on Trump that Billy Bush knew a lot of famous people himself. Otherwise why would he be known among the unkind in Hollywood as Sidney Suckup? “I know,” Trump thought, “I’ll tell him that I have dated 483 models, by actual count, and that I have more gold bathroom fixtures than anyone in Palm Beach. No one else is even close.” But that sounded sort of lame, even after he came up with a figure of how many of the models had used the gold bathroom fixtures. He pondered. Then he thought, “I’ve got it. I’ll tell him that when you’re a star you can grab women by their pussy.”

Incident: The day after tweeting that his widely panned speech at the CIA had received a standing ovation (the audience, not having been invited to sit down, had been standing from the start), Trump said to business leaders at the White House, “I’m a very big person when it comes to the environment. I have received awards on the environment.” As far as the Washington Post fact-checkers could discover, he has never received an award on the environment.

Widely accepted view: He can lie and boast at the same time.

Alternative explanation: Knowing how much Trump craves attention, his employees presented him on his 50th birthday with a mock award—a trophy that said “Best Boss.” The next morning, he asked his secretary where the day’s award was. So the employees quickly came up with another trophy (“Longest Neckties.”) After 10 or 15 years of receiving an award every day, Trump lost the distinction between the make-believe awards and real awards. He genuinely believes that he has received environmental awards, since some of his daily awards were environmental—e.g., “Largest Swimming Pool.”

Incident: Although no evidence whatsoever has been offered to support this claim, Trump continues to say that he only lost the popular vote because 3-5 million undocumented immigrants voted and every one of them voted for Hillary Clinton.

Widely accepted view: He has an infantile inability to admit losing anything.