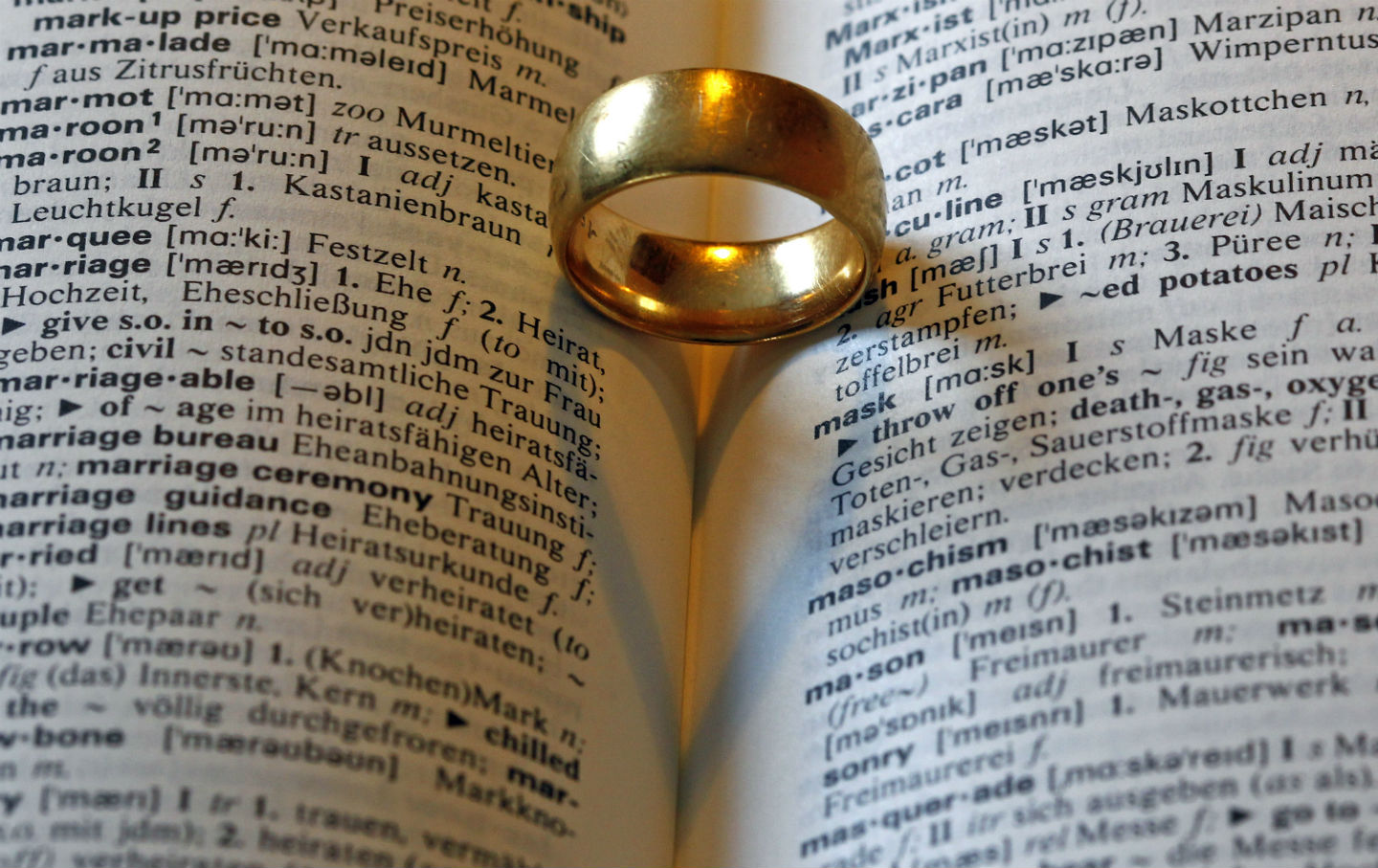 In 2009, I landed a book deal to write about what I felt was (still) the final frontier for feminists in their personal lives: how to be in a relationship and maintain your independence. I had just broken up with my boyfriend and was starting to realize that being in a couple may not have been for me. In looking for guidance, I turned foolishly to the self-help aisles of bookstores, only to find the shelves lined with harangues on how to make myself perfect for Prince Charming. How was it possible that publishers were still peddling sexist messages to women about how best to find love? So I wrote a book.

I surveyed materials from across the spectrum, from feminist manifestos to sexist screeds, and I was struck by two opposing themes on women and love: (a) if you don’t get married, you are a failure, whether you chose this devastating status or not, and (b) don’t worry, single life can be empowering—just look at Beyoncé (oh, wait…). Women of all kinds were defined either by the relationship they had or the one they did not: Get married before you get too old, or you better be the happiest single person that ever walked the planet.

Seven years later, women are still trying to explain themselves for being single, but the cultural balance has tipped toward empowerment in that status. Author Kate Bolick’s widely discussed new memoir, Spinster: Making a Life of One’s Own, epitomizes the shift. In a book-length adaptation of a 2011 essay in The Atlantic, Bolick asks, How do you create a life as a single woman within a culture and economy that still, despite facing the lowest marriage rate in history, presumes the inevitability of marriage? Her answer: Embrace being a spinster.

I appreciate the sentiment, but if only it was that easy.

Bolick surveys her five favorite writers (all white women), whom she calls her “awakeners,” and concludes that there have always been women who live outside the bounds of marriage, even while they are married. She suggests that, similar to these women, we should embrace this “highly ambivalent relationship to the institution of marriage,” and I agree. It’s an orientation toward marriage that has long been common for women of color and members of the LGBT community—it just wasn’t perceived as an empowering and acceptable identity until straight, white women adopted it. But even with declining rates of marriage and more proudly single people than ever before, the consequences of being single are still real—and harder for some women to bear than others.

For Bolick being single is a choice, a calling—no matter how many suitors come to your doorstep, or even if you are in a relationship and want to hold on to your “inner spinster,” as she calls it. Even Bolick’s critics agree that singleness is an empowering, if not existential choice that is foundational to being a modern woman. In her Slate review Laura Kipnis writes, “It’s depressing that women seem to keep forgetting that basically we can do whatever we want.” It’s true: Some women are choosing to forgo marriage and embracing their single life. Yet for others, being single isn’t the stuff of poetic memoirs written on desolate islands; it is a reality that you are not only demonized for living out but are often boxed into, with significant material consequences. The idea of single life as a universally empowering choice is based on a fairly affluent sense of feminism, one in which you don’t “need a man” for financial and social supports, because you can provide for yourself.

Second-wave feminism relied on the notion that empowerment came from transitioning from homemaking to the work place. Women of color and low-income women have always worked—whether they were married or not, it was a financial necessity—but today, work outside the home is the norm for women of all demographic backgrounds. All of that work is not leading to prosperity, however, especially for single moms and women of color. The National Women’s Law Center analyzed 2013 Census data and found that one in seven women live in poverty (nearly 18 million). They found that poverty rates are higher for women who head families (39 percent), African-American women (25.3 percent), Latina women (23.1 percent) and women 65 and older living alone (19 percent). The poverty that these numbers chart is made worse by the shame attached to it—the caricature of the single woman or the single mother who lives off the state, demonized for being sexually lascivious and living outside of the supposedly decent bounds of marriage. There are women who live in the borderlands of hetero-normativity, where single may not be an empowering choice, but instead a cast upon reality full of judgments and unfair treatment. Simply celebrating your inner spinster won’t help them.

The “single and loving it” narrative also creates an additional source of pressure for women of all incomes to prove they are doing just fine—lest they be evidence of feminism’s failures (see, you really can’t do it on your own!). The happily single ideal is embedded in the American myth of rugged individualism, and it runs in opposition to the reality that it “takes a village” not just to raise yourself and be happy but to distribute resources and support one another. The idea that we need only worry about our own lives and how we develop as individuals is rooted in a form of capitalist patriarchy that assumes we should be able to do it all on our own.

And frankly, it gets just as exhausting to placate a social necessity to be happy as a single woman as it does to meet the marriage standard. It obscures the lived reality of being single that, sometimes, is not that great—the lack of support when dealing with financial pressures, or when supporting a sick relative, or just having to take care of everything from rent to groceries on your own. Sure, it is inspiring to think of women who have not completely crumbled under the weight of it all—but I think we can do better.

We can’t relieve the social and economic pressure on single women by just identifying as and relishing in being a spinster. We need to shift some of our social institutions and policies to support us, including access to affordable childcare, pay equity or paid family leave. And to think really pie in the sky, we need to consider leave for single people for reasons outside of maternity leave! Culture shift is important, but so are policies and programs that can support our lives.

Bolick argues, and I agree, that we all struggle to define our existence based on a fairly narrow sense of hetero-normativity and marriage. But there is a viable third option—or rather, options—outside of the married and single binary; we just don’t have cultural and institutional support for them. Yes, the pressure to get married is in opposition to being an independent spirit and blocks our ability to be our fully realized selves. But I do wonder if it is marriage we are grappling with or an inability to imagine something outside of two people, in love, happily ever after.

I embrace being a single woman and, like Bolick, I really like to spend time alone. But I’m clear that as long as hetero-normativity is the chief organizing principle of our society, sometimes being single will mean navigating social and financial pressures that are fundamentally unfair. I also know that, sometimes, I don’t want to be single, and we need the cultural space to say as much, without being told that our independence is to blame for it. I am all about supporting each other in embracing our single lives, but we’re going to need more then some good role models and quaint homes in far away islands to create this new way of being.