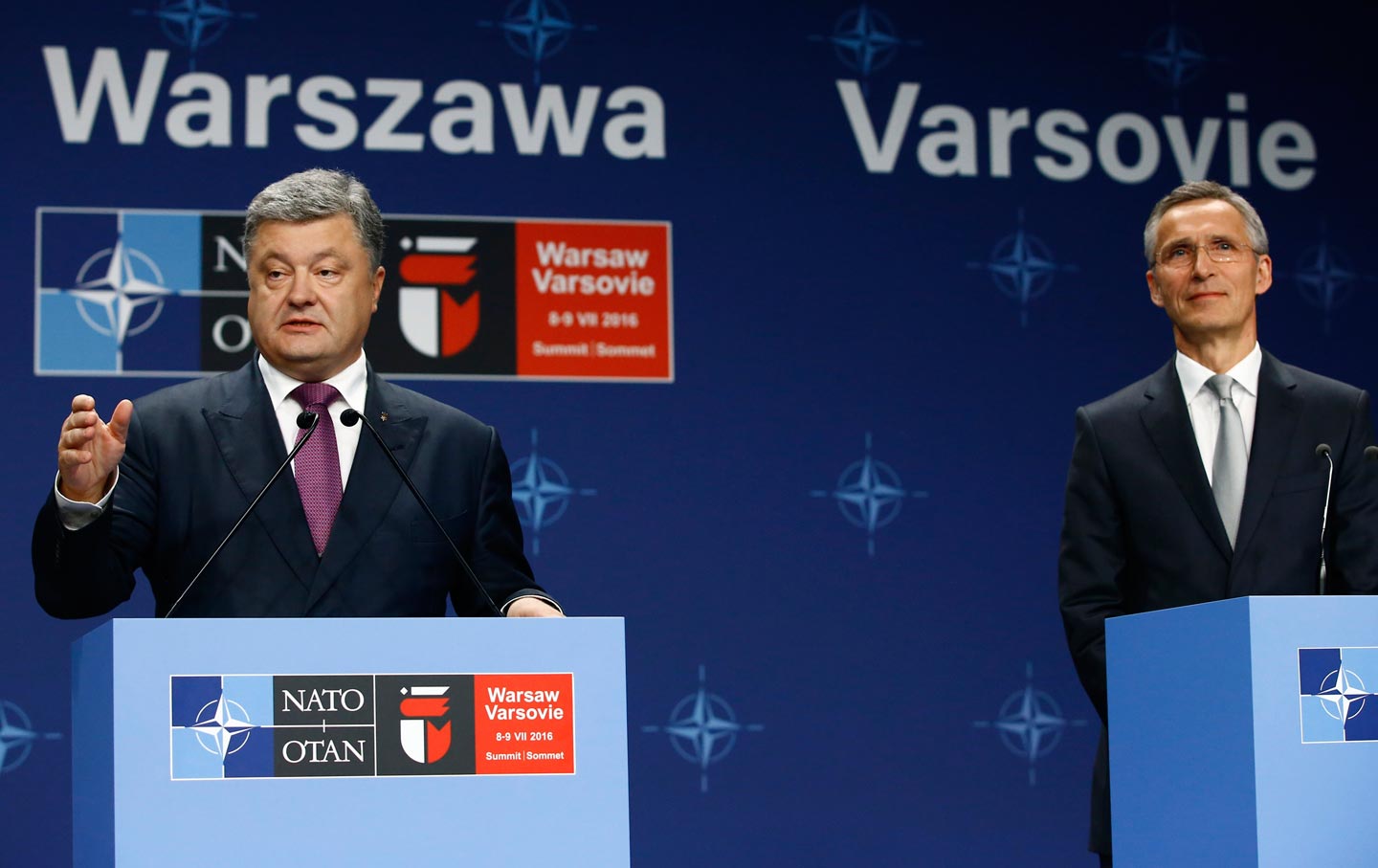 This past weekend, President Obama arrived in Warsaw for the final NATO Summit of his presidency. Timed to coincide with his arrival in Warsaw on July 8,  an op-ed by the president in the Financial Times claimed the NATO heads of state are meeting at perhaps “the most important moment for our transatlantic alliance since the end of the cold war,” because, among other things, “Russia’s aggression against Ukraine threatens our vision of a Europe that is whole, free and at peace.”

Unsurprisingly, Obama’s stated concerns over what is said to be Russia’s increasingly aggressive posture in Eastern Europe was echoed nearly verbatim in the summit communiqué:

Russia’s aggressive actions, including provocative military activities in the periphery of NATO territory and its demonstrated willingness to attain political goals by the threat and use of force, are a source of regional instability, fundamentally challenge the Alliance, have damaged Euro-Atlantic security, and threaten our long-standing goal of a Europe whole, free, and at peace.

Yet clearly not all aggression is equal in the eyes of the NATO alliance. Ukrainian President Petro Poroshenko, who was front and center on the summit’s opening day posing for the cameras alongside German Chancellor Angela Merkel and British Prime Minister David Cameron, has repeatedly fired indiscriminate Grad rockets on heavily populated civilian areas, a war crime under the Geneva Convention and International Criminal Court protocols.

Nevertheless, the principal summit “deliverable” was aimed at placating Poroshenko and his vocal band of alliance supporters (particularly the United States, United Kingdom, Poland and the Baltics). The alliance pledged to station four battalions (or nearly 4,000 troops) on Russia’s western frontier, ostensibly to prevent further “Russian aggression” in the region. The Poles are pushing for the troops to be placed in the Suwalki Gap, on the border of Poland and Kaliningrad, a non-contiguous swath of Russian territory on the Baltic coast tucked in between Poland and Lithuania.

Yet the troop buildup is based upon the faulty, though widely believed, premise that Russia’s assistance to the rebel forces in the breakaway republics of Luhansk and Donetsk is a prelude to even grander designs by the Kremlin.

As the neo-Nazi Speaker of the Ukrainian Rada, Andriy Parubiy, told The Washington Post in February, Putin “will proceed, until he is stopped by force.” This idea, repeated ad nauseam by Ukrainian officials, is one without any basis in reality. Yet NATO member states, particularly those along Russia’s borders, have embraced Kiev’s rationale, the better to squeeze the alliance for as much money as possible.

The problem, of course, is that Russia doesn’t even want the small slice of eastern Ukraine it currently helps control. No evidence suggests that Poland and the Baltic states are in Russia’s sights.

Indeed, NATO is addressing a phantom problem of Russian revanchism rather than an actual one: Ukrainian civil war. What NATO heads of state ought to be doing is redoubling diplomatic efforts aimed at the full implementation of the Minsk accords, as well as fashioning a humanitarian aid package to assist those most affected by the war. Increasing NATO troop levels in Poland will neither put an end to the fighting nor help the millions of non-combatants most in need.

Yet NATO persists in the delusion that Russia’s incursion into eastern Ukraine is the primary obstacle to a Europe “whole, free and at peace” while its own numerous maneuvers should be viewed as nothing if not benign. Already this year, NATO has undertaken military exercises in Georgia (March), Norway (March), Bulgaria (April), Estonia (May), Romania (May), and Poland (June).

It should also be noted that the NATO communiqué was noticeably quiet on the significant problem posed by alliance member Turkey, which is waging a savage war on its own Kurdish citizens and which nearly embroiled the alliance in a full-scale war with Russia last November. Recep Tayyip Erdoğan’s budding Sunni theocracy has actively aided and abetted ISIS, as well as the movement of jihadists across its borders into Europe—leading to, among other niceties, the slaughter in Paris in November and the airport and subway bombings in Brussels in March. And yet the summit communiqué, in a breathtakingly cynical passage, claims that Russia’s “significant military presence and support for the regime in Syria” has “posed further risks and challenges for the security of Allies and others.”

Though perhaps all is not lost, as cracks in the facade are beginning to show. Prominent dissenters from NATO’s new Cold War consensus include Italy’s Defense Minister Roberta Pinotti, German Foreign Minister Frank-Walter Steinmeier, and former Soviet leader Mikhail Gorbachev, who voiced his opinion over the weekend that “NATO has begun preparations for escalating from the Cold War into a hot one.” And perhaps most notably, French President François Hollande told reporters in Warsaw on July 8 that he believes “NATO has no role at all to be saying what Europe’s relations with Russia should be…. For France, Russia is not an adversary, not a threat.”

Ideally, summit meetings should be a time for truth-telling, and the truth is this: NATO has become an insuperable obstacle toward the formation of what Europe needs most: an inclusive security architecture that takes into the account the national-security interests of all parties on the continent, from Lisbon to Vladivostok. The alternative is a Europe riven by two powerful military blocs; but, unlike during the Cold War, when the division ran through central Europe, this divide runs along Russia’s western border.

Considering NATO’s recent history of military interventions in Serbia (1999), Afghanistan (2001–present), and Libya (2011), Western leaders who race around proclaiming that NATO’s ever-eastward expansion shouldn’t be a problem for the Russians because NATO is merely a “defensive alliance” are being willfully and dangerously obtuse.