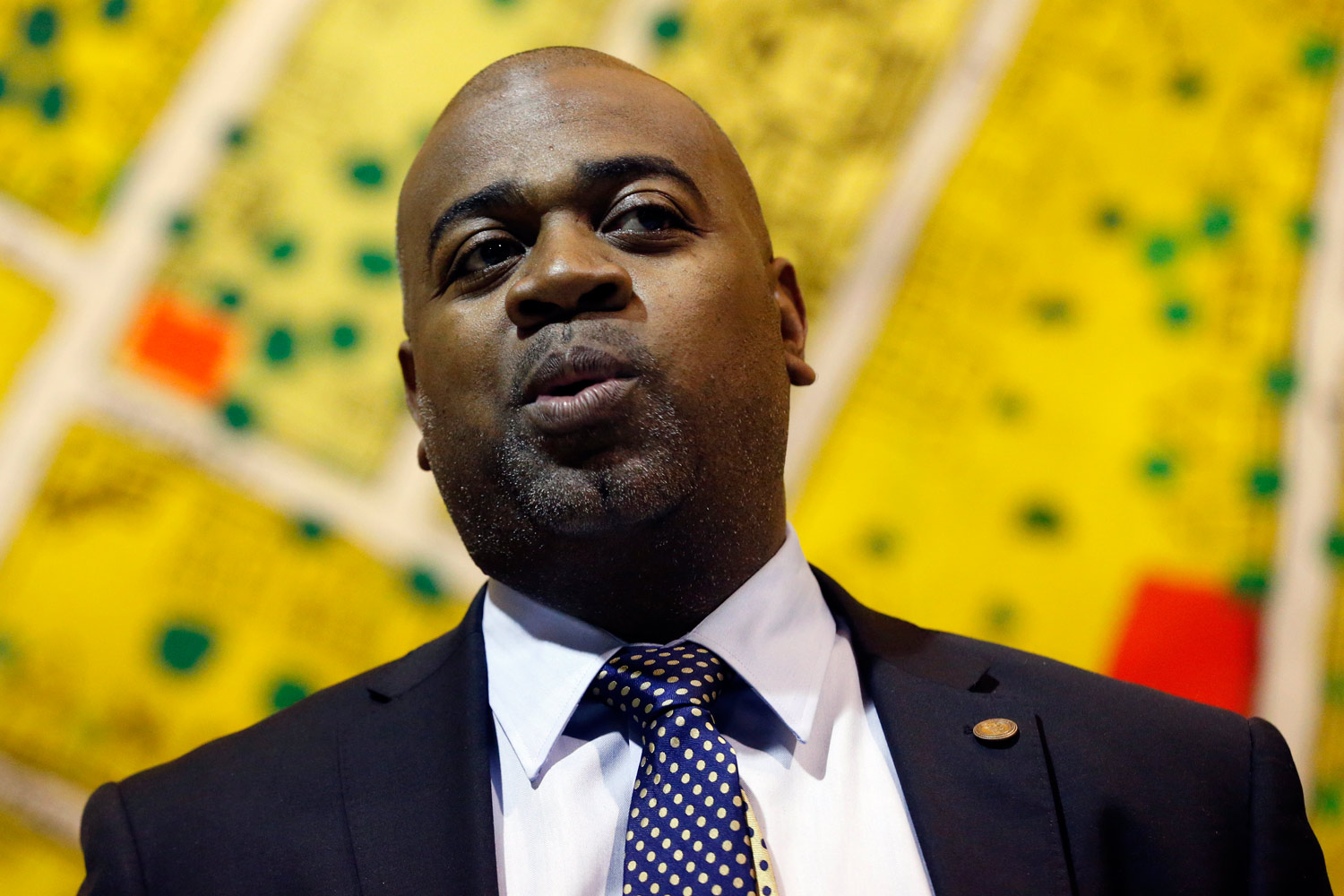 The election-night victory party for Ras Baraka, the new mayor of Newark, New Jersey, took place on May 13, at a hotel in the city’s gradually reviving downtown. Jubilant union volunteers in blue T-shirts from the Communication Workers of America (CWA) and Service Employees International Union (SEIU) flooded the ballroom. High-schoolers from the Newark Students Union, who are at war with an unpopular, state-appointed school superintendent, clustered at tables with their organizer-chaperones. At the podium, former New Jersey governor Richard Codey and the mayor of Jersey City, Steven Fulop, stood close to Baraka, basking in the vindication of their gamble to back him, in calculated defiance of the state’s Democratic machine power brokers.

On each table, meanwhile, someone had placed copies of a special edition of Unity & Struggle, the pamphlet started by Baraka’s father, the author and activist Amiri Baraka, who died on January 9. “POET ON!” screamed the headline, above a sharp late text by the elder Baraka excoriating white supremacy as the “real terrorism.”

The forces in the ballroom that evening gave a good indication of the energies that drove Baraka’s insurgent campaign and the expectations that greet him as he takes office on July 1. Newark is New Jersey’s largest city, with 280,000 residents, and one of New York City’s closest satellites. Tucked in the Jersey marshes, just eight miles from Manhattan, the city faces issues of poverty, crime and corruption that have marred its reputation for decades. The administration of Cory Booker, from 2006 to 2013, drew national attention but disappointed Newark progressives. Working with New Jersey governor Chris Christie, the telegenic Booker helped attract development and corporate offices to Newark’s downtown, and convinced Facebook’s Mark Zuckerberg to gift $100 million to the schools.

But for all Booker’s enthusiasm, Newark remains a city in crisis. The child poverty rate is 43 percent. There were 111 homicides in 2013, the highest level since 1990 and one-quarter of the state total. The mortgage crisis has left 55 percent of homes underwater. The budget deficit is $93 million, and the state has dangled the threat of fiscal takeover. And although Booker, who stepped down in 2013 upon his election to the US Senate, was the first Newark mayor in decades to avoid indictment, he left a major graft scandal at the city’s water agency.

Baraka, 44, represents a radical alternative to Booker’s boosterish, corporate-friendly approach. He ran on a platform of job growth, neighborhood services and opposition to school privatization and closures. He is himself a high school principal who went on leave from his post at Newark’s Central High School to run for mayor. He has also served since 2009 as city council member for the South Ward, home to the Barakas, Jameses, Paynes and other lines of Newark’s black political nobility. Baraka is most of all an activist: he first ran for mayor at 24, and he regularly led rallies against Booker’s policies, emerging as the most prominent thorn in the former mayor’s side.

During the campaign, Baraka’s opponent, a former state prosecutor named Shavar Jeffries, tried to turn these traits against him, portraying him as an indolent rabble-rouser and product of Newark’s patronage system, content to draw two public salaries while the murder rate in his ward doubled. Voters saw it differently. Despite a huge money advantage for Jeffries—much of it in independent expenditures from a Wall Street–backed education-reform group called Newark First—they elected Baraka by 54 to 46 percent, rewarding his dominant ground game and relentless populist messaging around a simple yet brilliant slogan: “When I become mayor, we become mayor.”

Baraka’s election adds a data point to a recent pattern of victories in urban elections—Bill de Blasio in New York City, socialist Kshama Sawant in Seattle—that progressives are eager to see as a national trend. It echoes, too, the election of another product of the black radical tradition, lawyer Chokwe Lumumba, as mayor of Jackson, Mississippi. Tragically, Lumumba died in January, after seven very promising months in office. The Lumumba and Baraka families are close, and Baraka’s triumph in Newark has been a balm for the black left still in shock at Lumumba’s passing.

But each city presents its own challenges, and also its own tactical matrix for progressive change. In Newark, one vexing feature is that the most explosive issue is one over which the mayor has little control: the future of the city’s schools. The state took over the school system in 1994, and the current superintendent, Cami Anderson, is pushing a charter-heavy reform plan, One Newark, that has sparked furious opposition from teacher and student groups. The brusque Anderson has alienated even neutrals—the Star-Ledger has called her tone-deaf, and a coalition of seventy-seven religious leaders rebuked her in April—but a stubborn Governor Chris Christie has stood by her. The Zuckerberg grant, meanwhile, has become bogged down in reform politics. As a former principal, Baraka knows the schools well. But as mayor, he must push for the return of local control—which both he and Jeffries advocated—or remain on the sidelines of the issue while still exposed to its political cost.

Where Baraka can have a more direct effect from the outset is on economic development. During the campaign, Jeffries emphasized law and order, arguing that only a massive attack on homicide, trafficking and gang activity could create attractive conditions for economic growth. Baraka, in essence, argued the opposite. He presented an economic plan that emphasized job training and quotas for qualified Newarkers, neighborhood growth corridors, small business development and partnerships with universities. He has promised to appoint a deputy mayor for full employment. And he has put his weight behind a plan to use eminent domain to repurchase underwater mortgages that lenders refuse to renegotiate, and work with an investment partner to sell them back to homeowners at present value.

At stake in these plans is the growing abyss between a reviving downtown and neighborhoods that have yet to share in its benefits. The problem is particularly grave in the heavily African-American South and West Wards, where Baraka scored his largest margins of victory. (Newark remains a majority-black city, but the Latino population has grown considerably in size and clout.) There is a danger that Newark’s downtown renaissance—with its Prudential twin office towers and Panasonic headquarters under construction, its anchor universities (a large Rutgers campus, the New Jersey Institute of Technology and Essex County College) and its buzzing arts and coffeeshop scene—will produce an enclave geared toward commuters and gentrifiers. In addition, although Newark boasts world-class infrastructure assets in Port Newark, the seaport  and Newark-Liberty International Airport, their control rests with the Port Authority of New York and New Jersey, which is embroiled in its own controversies.

Baraka has suggested he will seek authority for a local sales tax option, to capture revenue from Newark’s large population of daily inbound commuters. He is also keen to partner with the smaller towns that surround Newark, such as Irvington, Paterson, East Orange and Elizabeth, on joint procurement and regional jobs programs. And his alliance with Fulop, the Jersey City mayor—whose gubernatorial ambitions are an open secret—offers prospects for cooperation in defending New Jersey’s two largest cities both in Trenton, the state’s capital, and in the Tri-State region.

Baraka scored a key victory on June 10, when runoff elections for the Newark City Council ensured him a majority of five allies on the nine-member body. Still, he needs to launch an aggressive agenda from the moment he takes office to prevent the schools issue from taking up all the political attention. And he cannot wait too long to show progress in the neighborhoods to keep his coalition enthused. Close to 30 percent of registered voters took part in the election—a relatively high number by recent standards. And Baraka has said he wants to boost direct democracy by bringing back Newark’s area boards, a 1960s institution that served as a kind of permanent community meeting in each neighborhood.

After the election-night party, hundreds of Newarkers streamed down Broad Street to the steps of City Hall, as if to stake their claim to the city in a symbolic, jubilatory moment. Many had pulled on the “I AM THE MAYOR” T-shirts that campaign workers had tossed into the crowd during Baraka’s victory speech. Outside, they greeted each other: “How you doin’, Mayor?” “You the mayor!” “No, you the mayor!” Local political connoisseurs observed that they had not seen such euphoria in many years. If Baraka, unlike Cory Booker, is to play a lasting part in an American urban progressive renewal, he knows he he must take care of Newarkers first.

Editor’s Note: an earlier version of this piece stated that Shavar Jeffries, who ran for mayor against Ras Baraka, did not have an economic plan. That plan is now available on his website, shavarjeffries.com.