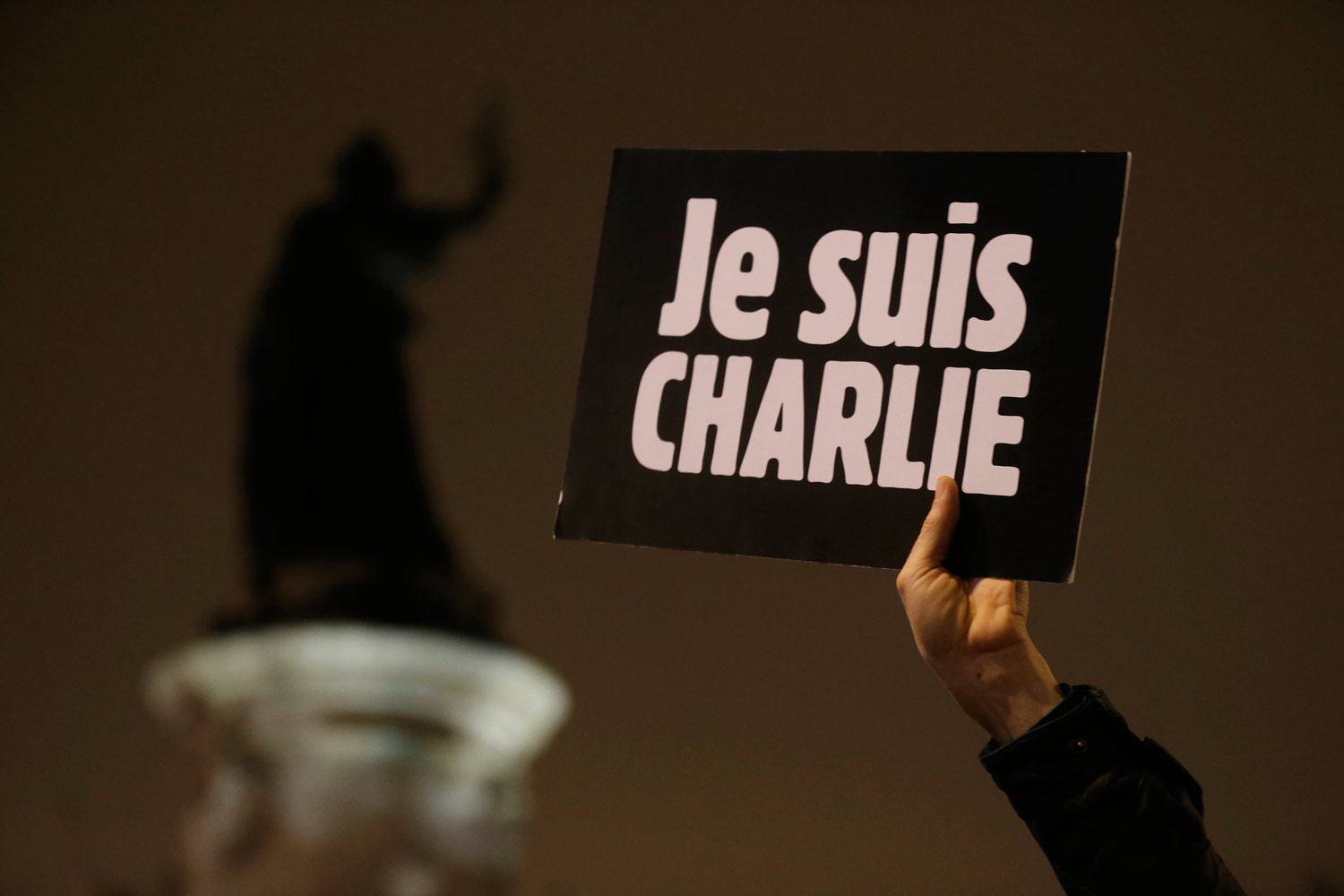 The editors, columnists and cartoonists of the French satirical magazine Charlie Hebdo were not the first journalists to die in 2015. The day before Chérif and Saïd Kouachi attacked the magazine’s Paris office, murdering twelve, the International Federation of Journalists condemned the killing of TV correspondent Khalid Mohammed al Washali in Yemen. Fourteen journalists and media workers have already been killed worldwide in 2015, and 118 were killed last year. “Today, we are all Charlie in our thought but, as journalists, we very much share the reason for which they were targeted,” declared IFJ general secretary Beth Costa. “Those bullets were also meant for all of us who stand up for press freedom.”

Satirists and cartoonists use sharp instruments—pens—to open up contentious debates. The journalists of Charlie Hebdo were known for this work and honored for their courage. They savaged pieties of all stripes. As this magazine noted in 2006, when global conflict erupted after Denmark’s Jyllands-Posten published cartoon images of the Prophet Muhammad (later reprinted in Charlie Hebdo): “given attacks over the years from within our own constituency on cartoons by such esteemed Nation artists as Edward Sorel, David Levine and Robert Grossman, we…know as well as anyone their power to inflame emotions. Defending free speech means defending the rights of those with whom we disagree most profoundly….”

Sunday’s march in Paris was an inspiring show of solidarity. But our defense of free expression cannot stop there, especially when governments supposedly committed to free speech—including our own—have hounded journalists and jailed whistleblowers. The tragedy in Paris was met almost immediately with promises from Western politicians to increase surveillance and bulk-data collection in order to prevent future attacks—surely the opposite of what the left-libertarian Charlie Hebdo would have endorsed. British Prime Minister David Cameron stated that there should be no communication that “we [i.e., the government] cannot read.” This is not a comforting thought when New York Times journalist James Risen until recently faced trial for protecting confidential sources, and when the only person in prison for illegal CIA torture is John Kiriakou—the whistleblower who revealed it. We face not a clash of civilizations, but a clash within many nations over freedom of expression.

There is no simple explanation for the despicable murders at Charlie Hebdo, as Laila Lalami lays out in the article following this one. The killers changed their prospective targets many times, and more than one Islamist organization has claimed credit for their actions. But there are causes we can identify. The failure of France to integrate its Muslim citizens and immigrants into French society, and the poverty and unemployment to which disproportionate numbers have been relegated, is one factor. Another is, unavoidably, the radical Islamist backlash to Western policy, from the invasion of Iraq to the current war on the Islamic State. Chérif Kouachi said that his militancy was inspired by the torture conducted at Abu Ghraib. There is no doubt that Western aggression in the Middle East facilitated the rise of ISIS as the most successful exporter of Islamist militancy via the Internet. (Amedy Coulibaly, who took hostages at a Jewish market the same day the Kouachis were killed, posed with an ISIS flag.) No matter how twisted and confused the attackers’ logic and loyalties were, Western war-making is inseparable from the creation of new forms of terror. We should keep this in mind as the United States proceeds on its latest intervention, this time in Syria, where new evidence indicates that a US coalition strike may have killed fifty civilians.

Standing in solidarity with journalists around the world means opposing reckless actions by the United States abroad that make us all less safe, but journalists in conflict zones in particular. It also means continuing to combat surveillance at home—especially surveillance of the press. These struggles honor the journalists who have died by defending those who carry on the fight.