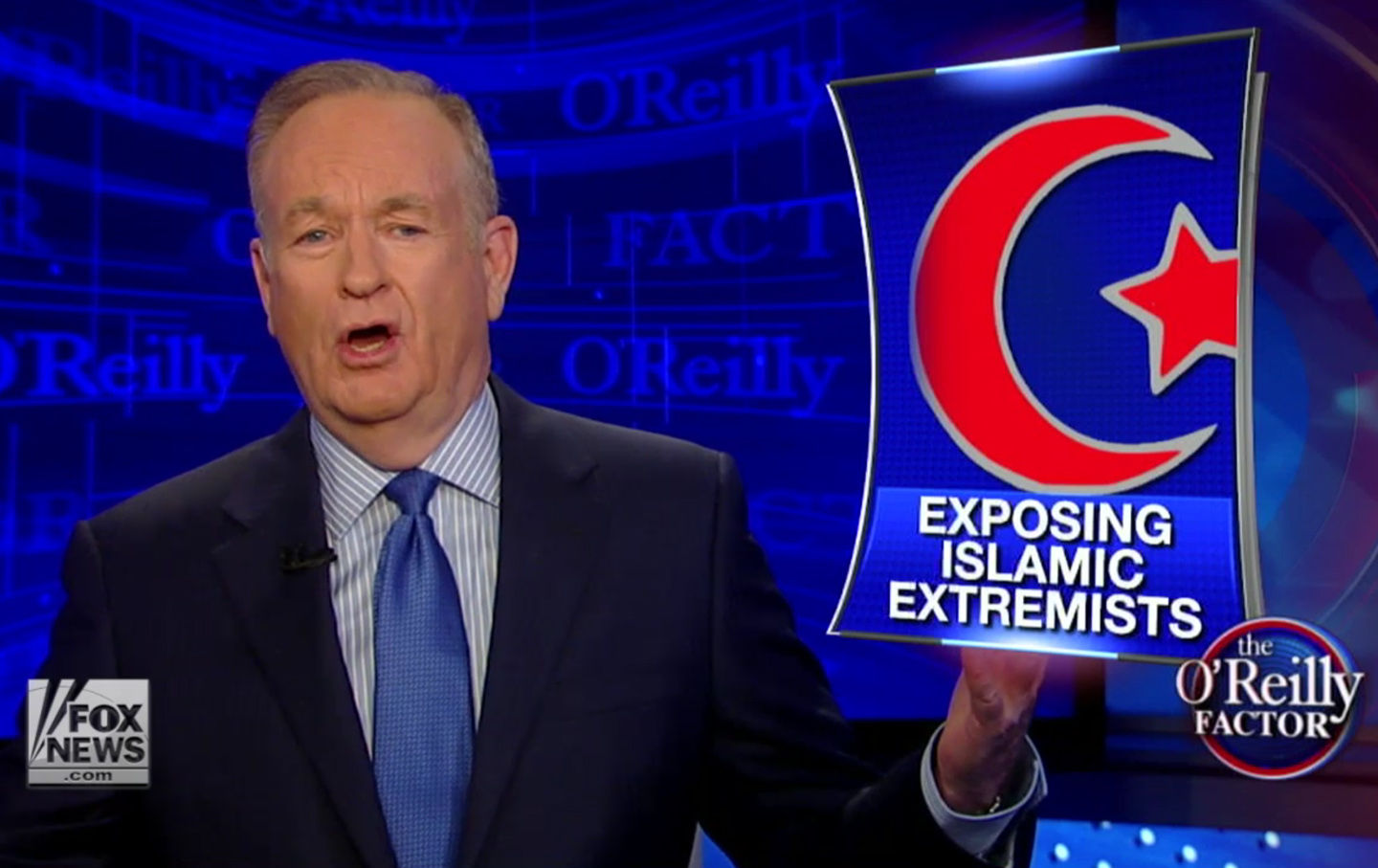 Bill O'Reilly brought Ryan Mauro, National Security Analyst for the Clarion Project, on his show in January to speak about the dangers of Muslim guerrilla training camps in the United States. (Fox News)

Dylann Roof was indicted on Tuesday by a grand jury for nine counts of murder and three counts of attempted murder. The charges come out of his alleged shootings at Emanuel African Methodist Episcopal Church in Charleston, South Carolina, on June 17. If Roof is guilty, of course, he is no simple murderer but a white supremacist terrorist who hoped to start a race war. Members of all minorities in America are menaced by such hate groups, not just African-Americans. Only last year, three Jews were shot dead in Overland Pass, Kansas, by a Grand Dragon of the Ku Klux Klan.

Now it emerges that a major attack was planned on a largely Muslim suburb of Hancock, New York. Former candidate for the US Congress and Christian clergyman Robert Doggart was indicted this week for plotting a military-style assault on the American Muslims of Hancock. Doggart allegedly urged his followers to stock up on assault weapons and Molotov cocktails: “The Operation in mind requires but <20 expert gunners. Target 3 is vulnerable from many approaches, and must be utterly destroyed in order to get the attention of the American People. If you are volunteering, and can show for a face-to-face meeting of these patriots, then we would welcome your skill set.” He planned to burn down a mosque and a school and cut the residents “to shreds.”

There has already been a major massacre aimed against American Muslims, the killing of six people at a community picnic in Oak Creek, Wisconsin in 2012 by white supremacist Wade Michael Page. His hatred was so blind and ignorant, however, that he ended up killing Sikhs rather than Muslims (male Sikhs often wear a turban, but theirs is a South Asian religion closer to Hinduism than to Islam).

How does someone become so warped? Dylann Roof was radicalized by white-supremacist websites and by inflammatory media reporting on the killing of Trayvon Martin, which often took a blame-the-victim tone. Devotees of racial hatred stereotype a minority as dangerous in their essence. While there are individuals who are prone to violence, there are no large social groupings of millions who are, by virtue of some innate DNA.

There is, moreover, no such thing as race in the 19th-century conception of a “pure” bloodline. About 12 percent of “whites” in Louisiana and South Carolina have recent African-American ancestors (perhaps Dylann Roof does). Over time, all will have some African roots, as that 12 percent intermarries with the rest. About a quarter of the genetic inheritance of the average African-American derives from Europe, and 2 percent from Native Americans. In Spain, where Isabella and Ferdinand attempted to ban Judaism and Islam in 1492, perhaps a fifth of today’s Spanish population has Jewish ancestors, and one in 10 is descended from Arab Muslims.

Roof only had a ninth-grade education and reified race as an absolute. He came upon the website of the extremist Council of Conservative Citizens through a Google search for black-on-white crime. That is the second step race hatred takes, to configure a minority as a threat to the majority—so large a threat that indeed the majority is reduced to a functional minority itself. Roof said he chose Charleston as the site for his act of terrorism because it at one point had the largest proportion of African-Americans to whites of any city in the country. It thus epitomized for him the prospect of being overwhelmed. He shouted before he assassinated nine people, one of them a sitting state senator, that they had taken over his country and raped his women, and that they “had to go.”

In the mind of the racial supremacist, the world is upside-down. The majority is a minority. The oppressed and discriminated-against minority is actually a powerful criminal conspiracy. The minority systematically rapes the women of the hapless majority, destroying the manhood of the latter and sinning against racial purity. The minority is capable of staging a coup that will reduce the majority to powerlessness. Most members of the majority cannot see the growing threat, but an act of brazen bloodshed might just wake them up, the racialist terrorist thinks.

That Roof posted at a white supremacist site discussion board has brought it to the attention of the FBI. Its organizers maintain that they did not advocate or incite violence and that the backlash against them because Roof posted there is a threat to freedom of speech. This reaction by hate-speech proponents is common and predictable, since in their own minds they are defending the majority-which-is really-a-minority from the brutal menace of the minority-which-is-taking-over.

It is no accident that Roof was incensed, not only by African-Americans but by Muslim and other immigrants into Europe. He wrote in a manifesto registered to the web under his name:

From this point I researched deeper and found out what was happening in Europe. I saw that the same things were happening in England and France, and in all the other Western European countries. Again I found myself in disbelief. As an American we are taught to accept living in the melting pot, and black and other minorities have just as much right to be here as we do, since we are all immigrants. But Europe is the homeland of White people, and in many ways the situation is even worse there. From here I found out about the Jewish problem and other issues facing our race, and I can say today that I am completely racially aware.

The trope that Europe is being overwhelmed by immigrants or the absurd charge that Muslims will shortly make up 50 percent of the continent’s 500 million residents is pushed by an elaborate and well-heeled Islamophobic network on both sides of the Atlantic, spearheaded by far-right neo-fascist parties such as Marine Le Pen’s National Front in France or the UKIP in Britain, and by professional stalkers of Western Muslims such as Geert Wilders. Among Wilders’s enthusiastic cheerleaders are Pamela Geller and Daniel Pipes. Pipes has warned against allowing Western Muslims to have the vote, and has falsely alleged that they are at the root of a rape epidemic in Europe. In other words, they are taking over the country, raping its women, and must go. Ironically, Geller and Pipes are themselves of Jewish heritage, but have associated themselves with views more often held by the European extreme right wing, which isn’t exactly philo-Judaic. Apparently, they are willing to adopt these smelly bedfellows because of their support for Israeli squatters on the Palestinian West Bank, whom they believe are served by a denigration of Muslims.

Although its members do not advocate violence against Muslims, this Islamophobic network appears to have contributed to some of Dylann Roof’s anxieties about the fate of white people in their supposed European homeland (in fact, Muslims have lived on European soil since the 8th century, beginning only four centuries after Christianity itself was officially promulgated by Constantine). The Islamophobic network was also extensively referenced by mass murderer Anders Breivik, who in 2011 shot down dozens of leftists in Norway for being soft on Muslims.

The Islamophobes take advantage of the media prominence of fringe extremist and violent Muslim movements to play on Western fears, even though Muslims in the West are for the most part mainstream. The hate groups pose as defenders of Western democracy, even though their rhetoric denies the pluralism on which that democracy is founded. What is pernicious is that they see all Muslims, or some very large proportion of them, as inherently dangerous. In fact, far more Americans have been killed by white extremists than by Muslims in the past decade. In Europe as well, annual Interpol reports find that Muslim Europeans are responsible for very few acts of terrorism and that most of the latter are perpetrated by separatist movements or far-right organizations. Anti–black propaganda by Roof and his fellow travelers also depicts Africans and African-Americans as unusually and congenitally violent, which may have been among the attractions of focusing on Rhodesia for Dylann Roof, since post-Rhodesia Zimbabwe has been turbulent and authoritarian (so was white-ruled Rhodesia).

While the 1st Amendment protects most hate speech in the United States from government intervention unless it poses a clear and present danger of erupting into violence, no one has a right to be accorded a large audience on the public airwaves. Islamophobic and anti-minority programs on Fox News Channel and right-wing radio have gratuitously coddled racists and Islamophobes and helped broadcast their vitriol to millions. In January, Fox hosted Ryan Mauro, who alleged that there were dozens of Muslim guerrilla training camps in the United States and identified the Muslim group in Hancock, called the Muslims of America, as one of them. That largely African-American group was defended by the local sheriff as peaceful. Mauro’s spot came as part of a Fox disinformation campaign alleging that cities such as Birmingham in Britain are “no-go” zones for non-Muslims, a silly assertion that drew forth the derision of social media.

Doggart and his contacts appear to have taken Mauro deadly seriously, and they determined to go on a murder spree in the middle of New York State, just as Roof had determined to go on one in Charleston. According to the indictment, published by Talking Points Memo, Doggart told a woman in his circle, “We will be cruel to them. And we will burn down their buildings,” and “[i]f anybody should, if anybody attempts to, uh, harm us in any way; our standoff gunner will take them down from 350 yards away. The standoff gunner would be me.” He added, “We’re gonna be carrying an M4 with 500 rounds of ammunition, light armor piercing. A pistol with 3 extra magazines and a machete. And if it gets down to the machete, we will cut them to shreds.”

The dangerous propaganda against peaceful Muslims in the United States being promoted by hate groups makes Muslims potential victims of the violent fringe of this extremist movement. Luckily, Doggart made an inflammatory posting on his Facebook page and came to the attention of the FBI. His telephone was tapped, and his conversations revealed a plot against Hancock residents. Outlets such as hate websites, far-right-wing radio, and Fox News Channel are not responsible for Doggart’s decision to plot a massacre, but they are guilty of creating an atmosphere in which such acts make sense to the fringe. Their irresponsible harping on race and non-Christian religion to please the angry-old-white-man demographic should be met with consumer boycotts of the products that advertise on them. Respectable media should cease interviewing them and giving them a platform. Civil society has to show its disdain for a discourse that divides us and reduces us to the politics of discrimination and violence. Otherwise, Oak Creek, Overland Pass, and Charleston could easily be followed by further such atrocities.