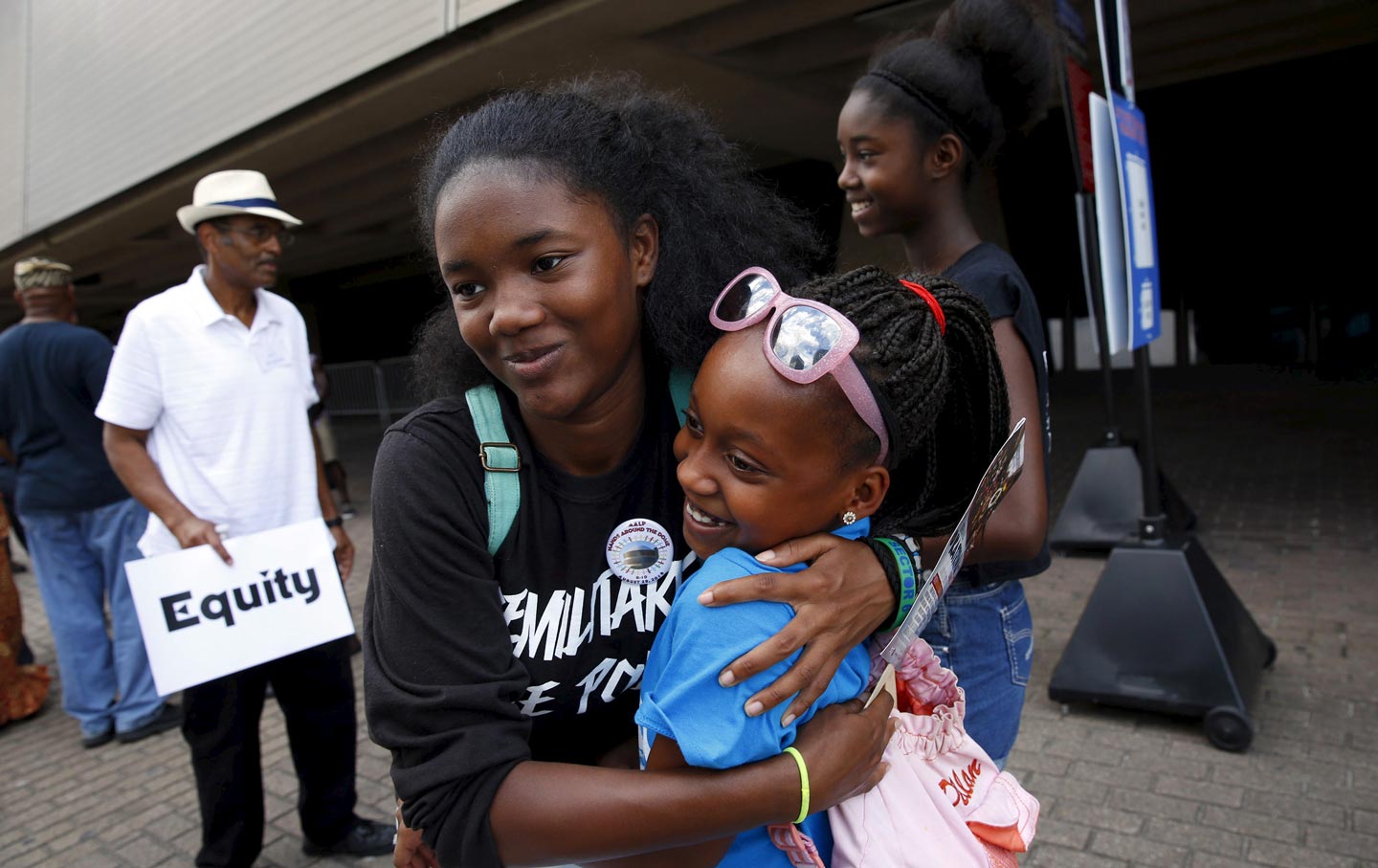 Watson and Joseph embrace outside of the New Orleans Superdome. (Reuters/Edmund Fountain)

In 2012, Alexis Sumpter had swiped her school-issued MetroCard through a subway turnstile in Harlem when she was stopped and then handcuffed by two plainclothes New York City police officers—they thought she was too old to be using a student subway pass. At the time, Sumpter was 15 years old. She said, according to an interview she did with staff at Georgetown Law, that her mother showed up to the station and after some time was able to convince the officers of her daughter’s age and she was let go. But it took a toll on her. After the ordeal, Sumpter went into therapy, which, she said, helped her heal from the incident.

According to a new report released by Georgetown University, such “adultification” of black girls is a common occurrence. Beginning when they are 5 years old and continuing through age 19, black girls are viewed as more adult than their white counterparts. And this “adultification” happens for a reason. Dating back to slavery, black women have been stereotyped as the “jezebel” (naturally hypersexual), the “sapphire” (angry and emasculating), or as the “mammy” (motherlike, asexual,  and nurturing). The report found that these stereotypes are alive and well today, and shape our perceptions of black girls as well as black women.

The study found that starting at age 5, black girls were viewed by adults from different backgrounds as behaving and seeming older than they actually are, that they are assumed to know more about adult topics like sex, and that adults assume that they are likelier to take on the responsibilities of being an adult than other children their age. The study’s authors surveyed 325 adults from different racial, ethnic, and educational backgrounds; 74 percent were white and 62 percent were female.

Other reports have drawn attention to racial disparities in school discipline, and this new study asks the question: Why does this happen? At least one reason, the authors found, is adults’ perception of black girls. “In essence, our findings indicate that adults impose differential views and expectations about the development of black girls, stripping them of their identity and innocence as children and potentially diminishing their access to the very rights the system was designed to protect,” the report said. Those perceptions have very real consequences. According to a study cited in the report, black girls are twice as likely as white girls to be disciplined for small infractions like dress code or cell-phone use. They’re two-and-a-half times more likely than white girls to be disciplined for disobedience. That’s a greater disparity than for black boys, who are disciplined one and a half times as often as white boys for disobedience. Black girls are three times more likely to be disciplined for disruptive behavior than white girls, compared to black boys, who are one and a half times more likely than their white counterparts to be disciplined for the same thing.

America has been witness to what can happen when black girls are looked at as adults. Two years ago, in McKinney, Texas, white police officers showed up to a pool party in a predominantly white community, where black teenagers in attendance were singled out. A video that went viral showed a white police officer pinning down a crying black 15-year-old girl in a bikini. The officer pulled the girl’s arm, hair, and then her neck. The video was just one of many that sparked national debate on law enforcement’s treatment of young black Americans.

It happened again, four months later, in South Carolina, when a black girl was pulled from her seat and dragged across the floor by a white school-police officer. The video, captured by other students in the class, went viral and led to a more pointed conversation about the way black girls are treated by people in positions of power, like teachers and police officers. The African American Policy Forum released a report called #SayHerName and kicked off an accompanying hashtag to draw attention to black girls and women who were victims of police brutality.

The Georgetown study suggests that black girls are at the receiving end of a “double bind,” since they are viewed as more adult than their white counterparts, punished more for it, but are actually more vulnerable to the “discretionary authority” of the educators, law-enforcement officials, and others who are tasked with taking care of them. In an e-mail to The Nation, Rebecca Epstein, one of the report’s authors, said:

We hope that this report will begin a national conversation elevating awareness of this form of bias, particularly with input from black girls themselves to tell their stories. Policymakers and leaders in the field should use this information to re-examine traditional school discipline policies and reform practices in which black girls are treated more harshly for subjectively determined offenses like disrupting school and disrespectful behavior.

Teachers and law enforcement must be trained on the issue and how to combat it—only then, the report suggests, can the pattern begin to be reversed.