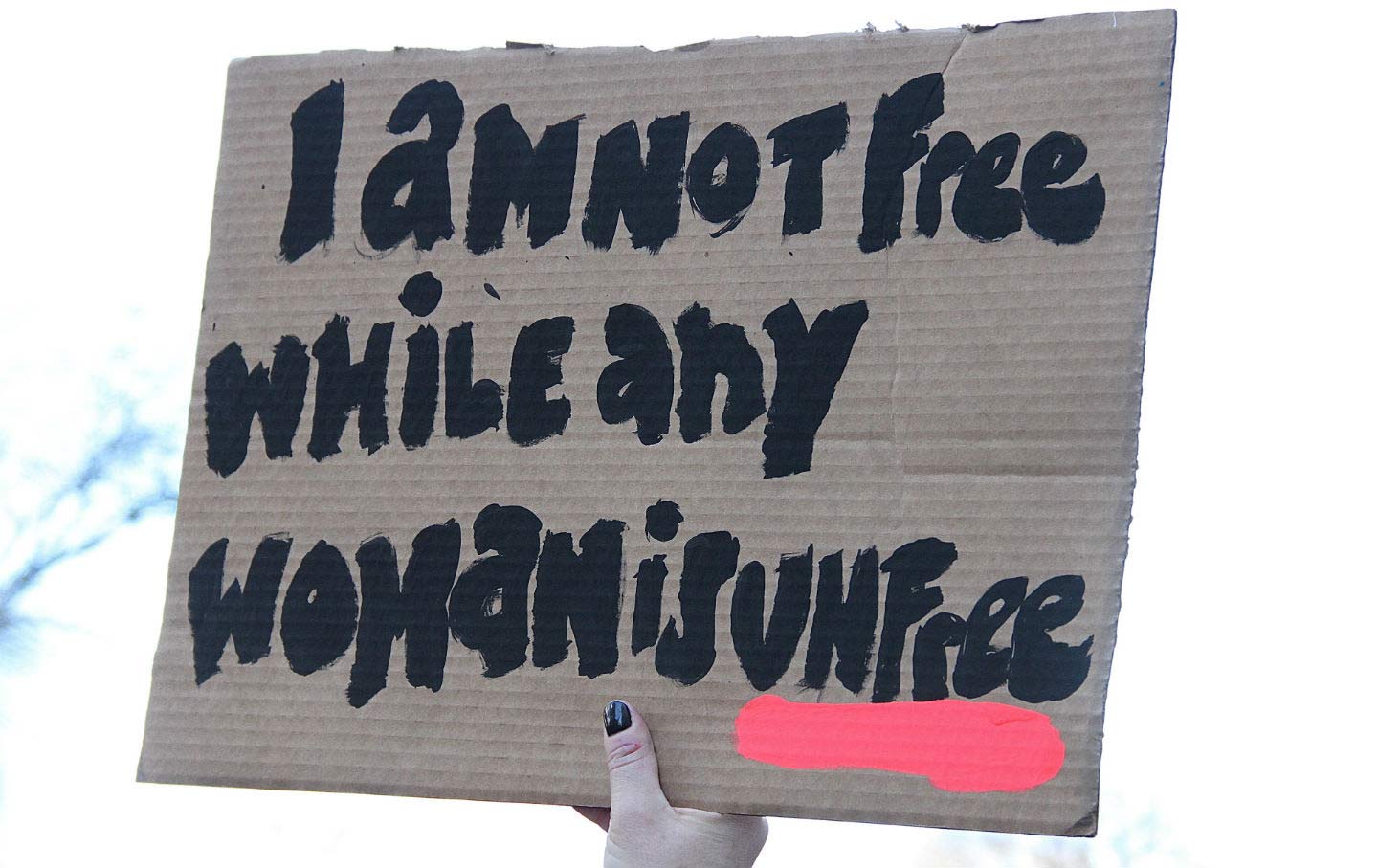 Can feminism be too inclusive? In my last column, I singled out abortion rights as essential to women’s equality and human rights. If women are legally compelled to carry every fertilized egg to term, and then (let’s be realistic) to raise those babies, they will always be slaves of their biology, and men will always have power over them.

But that’s an easy call. No honest person would say that forcing women to have babies at random, from menarche to menopause, is consistent with gender equality. But if you look at feminism more broadly—what do women need to flourish?—limiting it to issues of straightforward male supremacy doesn’t get us far enough: What about poverty, racism, war, the environment, anti-democratic regimes, the occupation of one country by another, capitalism? A Syrian refugee, an undocumented immigrant, a woman of color trying to raise her kids in a neighborhood with underfunded schools and hostile police—all suffer in specifically gendered ways that are nonetheless embedded in conditions larger than gender.

We don’t ask other progressive movements to take on so many tasks, let alone expand their briefs to include feminist issues.

Once you widen the lens of feminism, though, how do you know where to stop? There are plenty of leftist women who say that you have to be socialist to be a feminist, that you can’t support a candidate like Hillary Clinton—which would surely come as a surprise to most of the women who voted for her, huge numbers of whom showed up for the Women’s Marches. There are vegetarians who argue that you can’t eat meat and be a feminist, both for ecological reasons and because the use of animals is the template for the use of women, and there are vegan feminists who think that vegetarians are sellouts. From global warming to the mass imprisonment of black men, it’s hard to think of a serious issue that doesn’t affect women as women. After all, women are half of the human race, and as intersectional theory reminds us, they exist in multiple simultaneous identities. So is everything a feminist issue? Must women save the whole world?

I don’t have a ready answer for that. It’s worth noting, though, that women are raised to put themselves last, and they have worked hard on all sorts of causes in which their own interests were submerged. It’s also worth noting that there are only so many hours in a day: We don’t ask other progressive movements to take on so many tasks, let alone expand their briefs to include feminist issues. Environmentalists don’t have to demand equal pay and affordable child care; labor movements aren’t expected to call for the abolition of rape culture; Bernie Sanders and his followers famously waved away as “identity politics” the desire of women and people of color to see themselves fully represented in government. Perhaps that’s a mark of those movements’ limitations; perhaps the women’s movement is simply more advanced and broad-based, and we are about to see a left led largely by feminist women. That would be fantastic. Or perhaps the women’s movement is at risk of diffusing itself in too many directions, and (as has happened many times in the history of the left) fighting the specific subordinations of women to men will be sidelined in the service of some supposedly larger goal.

Feminism doesn’t have to be a magic key that opens every door; something can matter a lot without having to fit under its rubric.

What has brought these questions to the fore, for me, was the call by the International Women’s Strike for the “decolonization of Palestine.” In a much-discussed New York Times op-ed, Emily Shire argued in response that one can be a feminist and a Zionist—but also that the whole question of Israel/Palestine was not an issue the feminist movement needed to take on. In a Q&A with Collier Meyerson on TheNation.com, Women’s March organizer Linda Sarsour argues the contrary: To be a feminist means taking a stand against the suffering of all women, including the oppression of those in Palestine. I don’t know what the “decolonization of Palestine” means exactly—and believe me, I’ve asked—so I don’t know if Sarsour would consider me a feminist. Is ending the Israeli occupation enough? Does the two-state solution count? Israel’s current policies are appalling. But there are many terrible situations in which women are suffering and US policy plays a part, as it does in Israel/Palestine—look at Syria, Afghanistan, Iraq. Why is Palestine the only international situation that is supposed to be “at the beating heart of this new feminist movement”? Why not sex-selective abortion and female infanticide in India and China, femicide in Guatemala, bans on abortion from Nicaragua to Ireland, gender apartheid in Saudi Arabia, or the brutal Sisi regime in Egypt, which the United States also supports? And if the suffering of Palestinian women is the issue, is it relevant that Gaza is ruled by the misogynist theocrats of Hamas? If the answer is no, does this imply that the claims of nationalism are more important than the claims of women’s rights? That was certainly the case the last time anti-colonialism was “at the beating heart” of feminism: In country after country, women were told that they’d get their rights after national liberation, only to be pushed back once that goal was achieved.

It sounds naive even to raise the question of Hamas, because if someone is bombing your neighborhood and destroying your economy, you probably care more about that than that your own government won’t let women run marathons and takes a lenient view of men who murder their female relatives. But if Palestine is a feminist issue, what isn’t? And if everything that harms women is a feminist issue, how do you avoid setting up so many litmus tests that you lose all but a handful of perfect ideologues?

Feminism, like the rest of the left, has always been prone to demands for purity. But feminism doesn’t have to be a magic key that opens every door; something can matter a lot without having to fit under its rubric. If Palestinian women weren’t suffering in particular gendered ways under the occupation, the occupation would still be wrong, and I suspect Sarsour would be the first to say so. At a moment when a mass women’s movement suddenly looks possible in a way that’s fresh and exciting and inclusive, drawing tight boundaries seems like the wrong move.