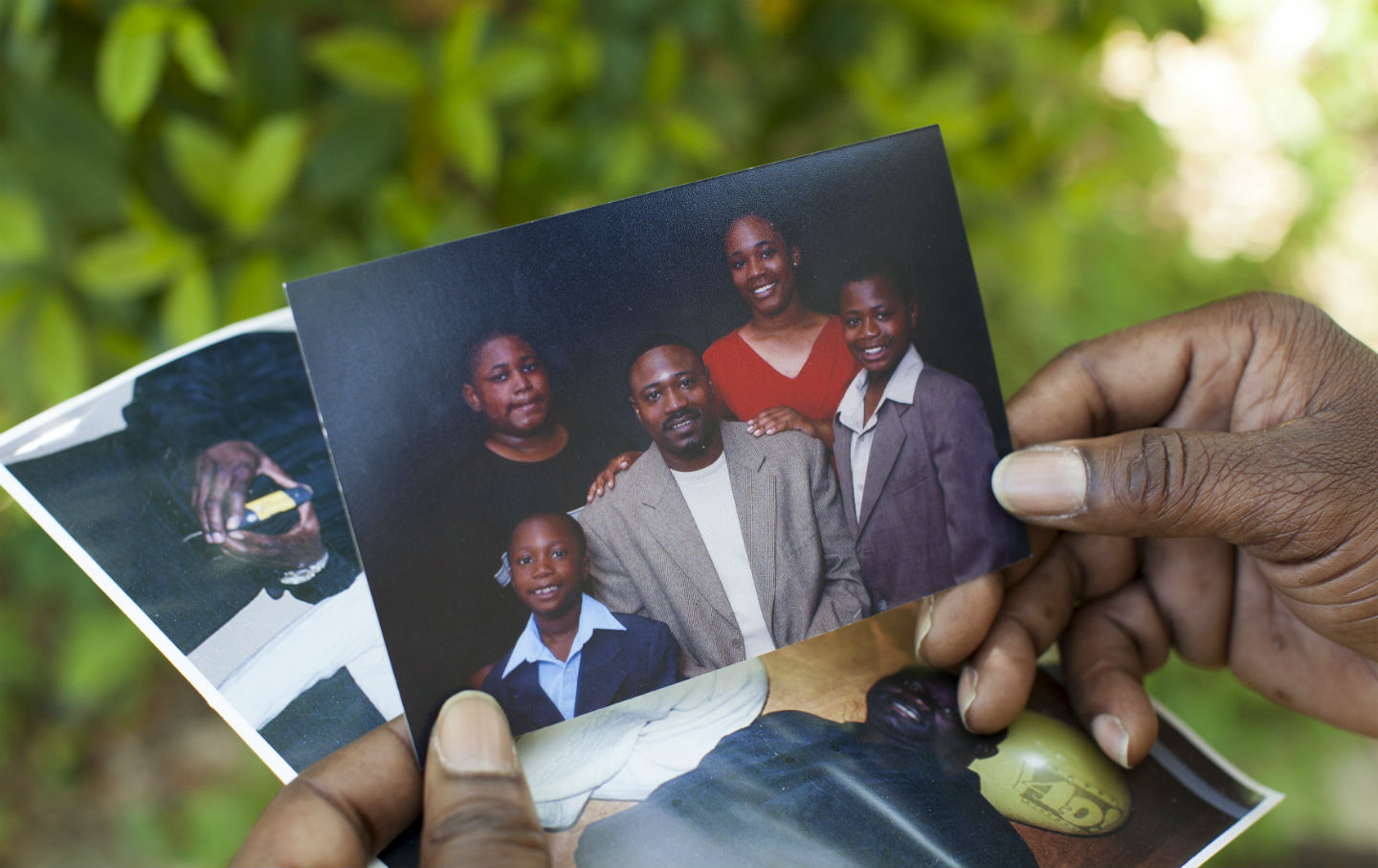 A few weeks ago, there was a shooting at my apartment building. A total of five shots were fired resulting in, thankfully, zero injuries. I was home when it happened, but live on the third floor, away from the shooter’s target. The kids downstairs, who hang out in the hallway pretty much everyday, drinking, smoking, talking shit, and selling weed, had some of their beef meet them at home. That night, I remember hearing one of them scream, “They shot me bro!”—though it seems it was probably the shock of the gunshots plus the shattering of glass from the building’s front door that made him believe he was hit. It was frightening.

However, more frightening than that is the fact that nearly every night since the shooting there has either been a police car, parked across the street with its lights flashing, or two cops posted outside my building, right at the steps, standing guard. This is supposed to be the measure that prevents further violence, but the presence of the police scares me more than the kids selling drugs or the gunshots ever did.

One day, while walking into my building, avoiding all eye contact with the two officers, I heard one of them say to other “Wanna do a vertical?” as I put my keys in the front door. A vertical is when police enter a building and go from top to bottom, scoping the place out for any potential criminal activity. I remember that these are the circumstances under which Akai Gurley was killed.

Another night, I was walking to the bodega to buy some ice cream, and as soon as I hit the bottom of the steps, still needing to walk down the hallway to get to the front door, the officers eyes were fixed on me, and they didn’t let up until I was blocks away. I feel incredibly lucky, especially days later when video surfaced of Walter Scott being shot in the back as he ran away from Officer Michael Slager in South Carolina.

Slager originally stopped Scott for driving with a broken taillight. Scott ran away, possibly fearing he would be arrested for owing back child support, and Slager chased after him. The video doesn’t show when the taser was drawn, but this interaction escalated to Slager using his taser on Scott, who managed to get away, at which point Slager drew his gun and shot at Scott eight times, hitting him with five shots. Were it not for the video taken by a local bystander, Slager’s account of the shooting—that Scott took the taser and because Slager feared for his life he had no other choice but to shoot him—would be the only account available. Now Slager has been fired and charged with murder.

That’s it, right? That’s what the movement was about? This is what justice looks like, correct? We’ve learned the mistakes from Darren Wilson killing Michael Brown, and Daniel Pantaleo killing Eric Garner, yeah? We’re going to start holding the police accountable.

I’ve said this before: there is no justice where there are dead black people. I’ll continue saying it, because if we’re satisfied with charges and potential prison time, we’ve missed the entire point of #BlackLivesMatter. This isn’t about getting “better” police, ones who exercise discretion in using force, but getting away from “needing” police altogether.

In 1966, James Baldwin wrote for The Nation: “…the police are simply the hired enemies of this population. They are present to keep the Negro in his place and to protect white business interests, and they have no other function.” This remains as true today as it was in 1966, only now we have bought into the myth of police “serving and protecting” wholesale. What do you do with an institution whose core function is the control and elimination of black people specifically, and people of color and the poor more broadly?

You abolish it. In 1964, Malcolm X told the students of Oxford Union: “You’re living at a time of extremism, a time of revolution, a time when there’s got to be a change. People in power have misused it and now there has to be change and a better world has to be built. And the only way it’s going to be built is with extreme methods.” Abolishing the police is an extreme measure, but as a measure of justice, it should be our ultimate goal.

We don’t consider the abolition of police a viable position to take because we believe they’re the only thing standing between upstanding citizens and the violence of the deranged. We’re afraid of being attacked on the street, of having our homes shot at, and being left without access to equally violent retribution. But does this mean we want police, or safety and security? Safety and security are ideas, ones that may never be fully achieved, and the police are an institution that have proved themselves capable of only providing the illusion of safety and security to a select few. The bulk of their jobs has nothing to do with violence prevention. They spend most of their time doing things like Slager did in his initial contact with Scott—stopping people for broken taillights. Writing for Gawker, David Graeber of the London School of Economics says:

The police spend very little of their time dealing with violent criminals—indeed, police sociologists report that only about 10% of the average police officer’s time is devoted to criminal matters of any kind. Most of the remaining 90% is spent dealing with infractions of various administrative codes and regulations: all those rules about how and where one can eat, drink, smoke, sell, sit, walk, and drive. If two people punch each other, or even draw a knife on each other, police are unlikely to get involved. Drive down the street in a car without license plates, on the other hand, and the authorities will show up instantly, threatening all sorts of dire consequences if you don’t do exactly what they tell you.

The police, then, are essentially just bureaucrats with weapons. Their main role in society is to bring the threat of physical force—even, death—into situations where it would never have been otherwise invoked, such as the enforcement of civic ordinances about the sale of untaxed cigarettes.

Ninety percent of an officer’s time isn’t devoted to our safety, but rather to things we may find annoying (or in the case of things like untaxed cigarettes, create a black market for goods that threaten the profits of businesses), inserting the potential for violence where there is cause for none. And when it comes to preventing heinous acts of violence (or holding the perpetrators accountable) that should be condemned by all, like domestic violence and sexual assault, the police are largely ineffectual. The police are not performing the function we say they are, and there are real ways to achieve a world with less violence that don’t include the police. We simply haven’t tried. Until we invest in full employment, universal healthcare that includes mental health services, free education at every level, comprehensive sex education that teaches about consent and bodily autonomy, the decriminalization of drugs and erasure of the stigma around drug use, affordable and adequate housing, eliminating homophobia and transphobia—things that actually reduce the amount of violence we witness—I don’t want to hear about how necessary the police are. They are only necessary because we are all too willing to hide behind our cowardice and not actually put forth the effort to create a better world. It’s too extreme.

When I say, “abolish the police,” I’m usually asked what I would have us replace them with. My answer is always full social, economic, and political equality, but that’s not what’s actually being asked. What people mean is “who is going to protect us?” Who protects us now? If you’re white and well-off, perhaps the police protect you. The rest of us, not so much. What use do I have for an institution that routinely kills people who look like me, and make it so I’m afraid to walk out of my home?

What Is Chris Wallace Thinking?